You are here:
Home / You can now order Miso Robotics’ latest kitchen robot for $30,000

You can now order Miso Robotics’ latest kitchen robot for $30,000

Miso Robotics today announced that its newest kitchen robot, Flippy Robot-on-a-Rail (ROAR), is now commercially available. The final design, which can cook up to 19 food items, mounts the robot on a recessed overhead rail to avoid interfering with human staff. On the backend, improvements to ChefUI, Miso’s software, aim to assist staff with workflows through a dashboard displayed on a 15.6-inch touchscreen mounted to the robot. An Intel depth sensor enables ChefUI to identify food and temperatures while learning to reclassify new foods introduced to ROAR.

ROAR costs around $30,000, but Miso plans to continue to price it down over the next year to $20,000 or less through a $1,000 monthly “robot-as-a-service” fee that includes regular updates and maintenance. ROAR can be purchased on a payment plan through TimePayments, and in the future, Miso says it will offer other financing options involving a lower upfront deployment fee and correspondingly higher software-as-a-service fee.

As declines in business resulting from the COVID-19 pandemic place strains on the hospitality segment, Miso believes that robots working alongside human workers can cut costs while improving efficiency — and overall safety. The company asserts its restaurant partners’ pilots to test ROAR create avenues for reducing human contact with food during the cooking process, ensuring consistency while freeing up human cooks to focus on less repetitive tasks.

Miso has long claimed that ROAR and its predecessor, Flippy, can boost productivity by working with humans as opposed to replacing them. ROAR can be installed under a standard kitchen hood or on the floor, allowing it to work two stations and interact with a cold storage hopper. It benefits from enhancements to ChefUI that expand the number of cookable food categories to chicken tenders, chicken wings, tater tots, french fries and waffle fries, cheese sticks, potato wedges, corn dogs, popcorn shrimp and chicken, onion rings, and more. Most recently, ROAR “learned” to cook Impossible Foods’ Impossible Burger, which Miso says requires special handling because of its texture and thickness.

“Additional new elements [in ROAR] … include an input zone that can receive manually loaded baskets and a safety shield that protects kitchen staff from hot fryers … Now we can really integrate not only with the POS system, but also all the delivery apps,” Miso president and chairman Buck Jordan told VentureBeat via email. “We have also added more cameras and sensors, to enhance our computer vision capabilities to drive more efficient operational workflows for operators. We can now track inventory, down to the chicken nugget, in the back of the house … And we have sped up the learning process for Flippy to scale menus — as quickly as 30 minutes in some cases.”

ROAR, which features a customizable LED panel that operators can use for branding, is able to prep hundreds of orders an hour thanks to a combination of cameras and safety scanners, procuring frozen food and cooking it without assistance from a human team member. It alerts nearby workers when orders are ready to be served and takes on tasks like scraping grills, draining excess fry oil, and skimming oil between frying batches as it recognizes and monitors items like baskets and burger patties. Plus, it integrates with point-of-sale systems (via ChefUI) to route orders automatically and optimize which tasks to perform, altering portion sizes for foods to map back to customer customization requests.

Miso says it saw “tremendous success” last year, serving up more than 15,000 burgers and more than 31,000 pounds of chicken tenders and tots. ROAR will soon flip burgers at more than 50 CaliBurger locations globally, and it’s already been deployed at a CaliBurger and a White Castle in Pasadena, Dodger Stadium in Los Angeles, and Chase Field in Phoenix. 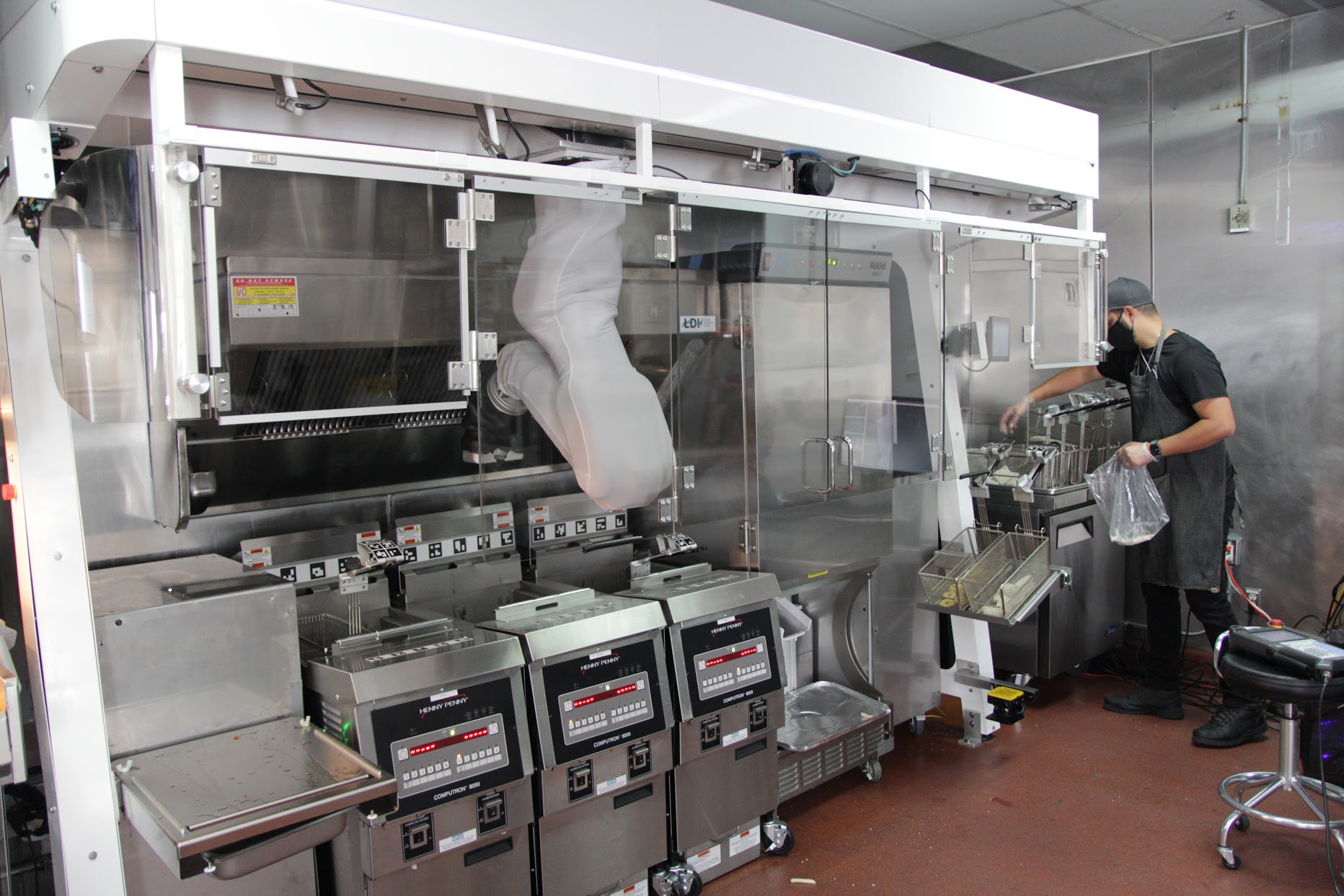 Despite Miso’s claims to the contrary, think tanks like the Brookings Institution anticipate automation will cause the loss of countless jobs. Roughly 36 million Americans hold jobs with “high exposure” to automation, meaning at least 70% of their tasks could soon be performed by machines using current technology, according to a report. Among those most likely to be affected are cooks, waiters, and others in food services.

But some restaurant industry executives claim high turnover rates underscore the need for automation. The official U.S. Bureau of Labor Statistics turnover rate for the restaurant sector was 81.9% for the 2015 to 2017 period, with the average cost to replace a worker estimated at $2,100 to $2,800.

RELATED NEWS
Google’s Transporter Network uses minimal data to teach robots to stack blocks
Decentralized identity: The key to the digital era?
Live-action Assassin’s Creed show coming to Netflix
PS5 Entertainment Apps Include Netflix, Disney+, And Twitch, But No HBO Max
Recent Posts
This website uses cookies to improve your user experience and to provide you with advertisements that are relevant to your interests. By continuing to browse the site you are agreeing to our use of cookies.Ok