Volansi (formerly Volans-i), which provides vertical takeoff and landing drone delivery services for commercial and defense customers, today announced a $50 million round. The company plans to use the funds to accelerate its go-to-market efforts as it expands into new territories globally.

The coronavirus pandemic has led to shelter-in-place orders around the world, restricting restaurants and other businesses to delivery or pickup options. Drones and autonomous vehicles can limit unnecessary contact between workers, couriers, and customers, potentially reducing the spread of infection. Among recent examples, Zipline’s drones have flown COVID-19 tests from parts of Ghana to the nation’s capital. Alphabet’s Wing drone business continues to make commercial deliveries to customers. And DJI conducted outreach to homeless populations in Tulsa, Oklahoma and helped reinforce social distancing guidelines in Daytona Beach, Florida. 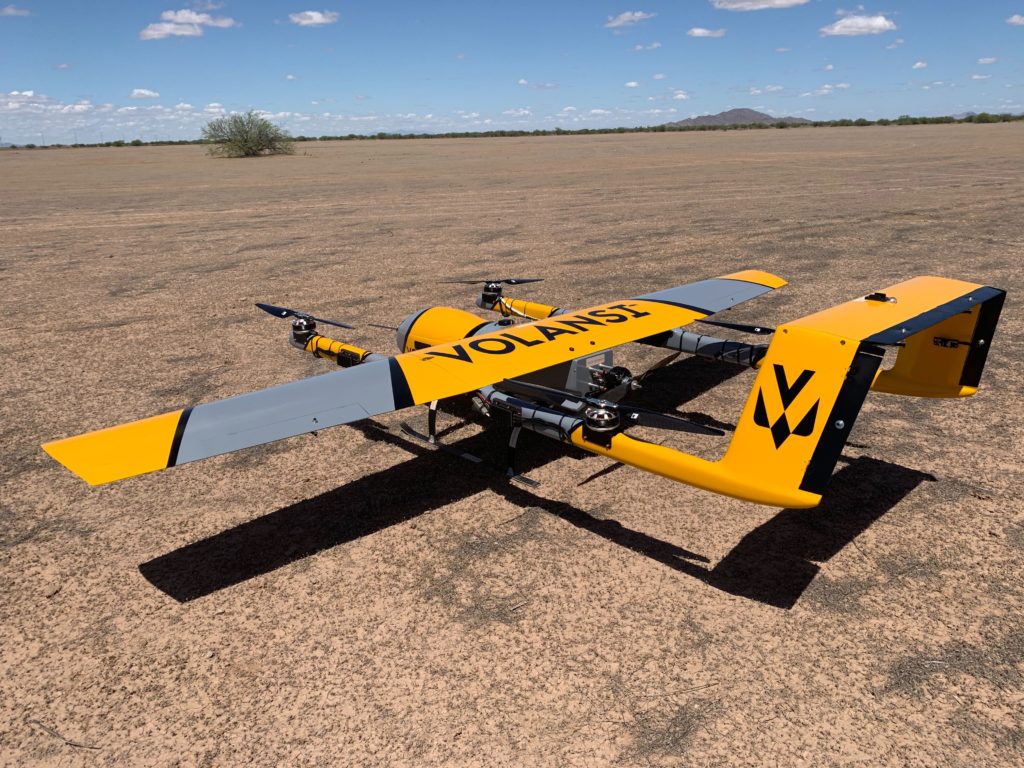 Volansi offers several unmanned aerial vehicles (UAVs), all of which tap open source and platform-agnostic control systems capable of “fully” autonomous flight. Thanks to redundant communication systems that kick in when GPS isn’t available, the UAVs can take off and land on moving platforms with minimal ground infrastructure.

The VOLY C10 (codenamed Gemini), which Volansi claims has completed operations in the U.S., Africa, and the Caribbean, can carry payloads of up to 10 pounds and fly for 60 minutes (about 50 miles) at 60 miles per hour. Meanwhile, the beefier VOLY C20 (codenamed Megamouth) can handle up to 20 pounds in addition to its 10-pound sensor payload and cruise at speeds exceeding 75 miles per hour for over eight hours.

The UAVs take one or two people 15 minutes to assemble, Volansi says, and were designed to fit into the bed of a truck. Customers can optionally have Volansi team members handle missions and deliveries, with packages priced for industries like construction, oil and gas, mining, and health care.

Volansi became involved in humanitarian relief after opening its production facility in Concord, California. The company worked with Merck and nonprofit organization Direct Relief to develop a drone-based medical supply system in Puerto Rico after Hurricane Maria. More recently, Volansi partnered with the North Carolina Department of Transportation and U.S. Federal Aviation Administration to perform tests and cargo delivery flights under the UAS Integration Pilot Program (IPP), with plans to ramp up operations in the future.

Reports show the commercial drone industry is continuing to grow quickly, albeit from a small base. A 2017 forecast from Gartner projected the number of commercial drones sold that year would exceed 174,000. And about $454 million was thrown at UAV startups in 2016 alone.

Icon Ventures led the series B round in Volansi, with participation from Lightspeed Venture Partners and Y Combinator as well as new backers Harpoon Ventures and Merck Global Health Innovation Fund. It brings the company’s total raised to over $75 million.

RELATED NEWS
Siren’s smart socks remotely monitor foot health for diabetics
Seismic raises $92 million to automate sales processes
Applying machine learning to keep employees safe and save lives
Arm unveils new chips for advanced driver assistance systems
Recent Posts
This website uses cookies to improve your user experience and to provide you with advertisements that are relevant to your interests. By continuing to browse the site you are agreeing to our use of cookies.Ok