You are here:
Home / Coralogix raises $25 million to parse software logs with AI

Coralogix, which analyzes software logs with AI, today announced $25 million in new funding and launched a real-time analytics solution that allows customers to pay according to data priority instead of volume. This allows them to get queries, alerts, and machine learning capabilities without using storage.

About 50% of logging statements don’t include any information about critical things like variable state at the time of an error, according to GitHub and OverOps surveys. That may be why developers spend an estimated half of their time on troubleshooting and bug-fixing.

San Francisco-based Coralogix, which was founded in 2014, provides AI analytics solutions for a host of software development challenges. Its suite automatically clusters log records back to their patterns and identifies connections among those patterns, forming baseline flows for comparison and future study. Scaling from hundreds to millions of logs — with integrations for popular languages and platforms like Docker, Python, Heroku, .NET, Kubernetes, and Java — Coralogix spotlights anomalies and affords developers access to a suite of identification, visualization, and remediation tools.

Coralogix is hosted as an Amazon Web Services app, and it hooks into Jenkins and other popular continuous integration/continuous delivery tools to ingest updates pushed to production systems. A query in Coralogix pulls up grouped results — highlighting when and where something occurred, any associated parameters, and the total percentage of those occurrences within the logs. 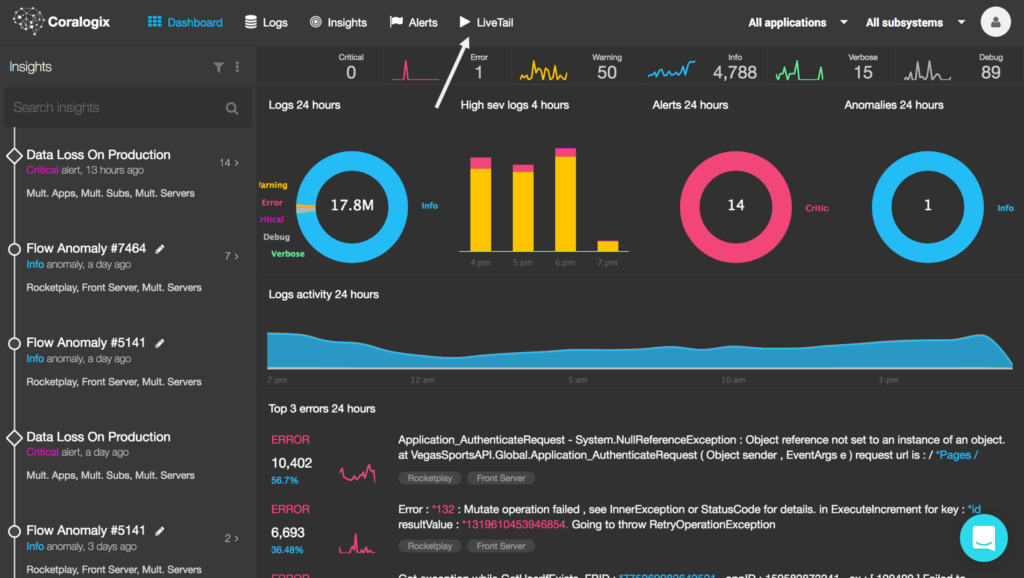 It also creates “component-level” insights from log data, in part by applying machine learning to software releases to spot quality issues. The service can enrich weblogs with IP blacklists to identify suspicious activity while issuing alerts when errors or critical log entries occur. In addition, Coralogix has an integrated security information and event management and intrusion detection system that taps machine learning to pinpoint anomalies within network packets, server events, and audit logs.

Coralogix claims to analyze over 1 million events per second in real time. Moreover, the company says it has automatically benchmarked over 100,000 software versions to date.

The log management market is expected to reach $1.2 billion by 2022, according to Research and Markets, and Coralogix isn’t the only one leveraging AI to surface abnormalities. Mountain View-based LogDNA raised $25 million last December to further develop its AI-powered tools that surface data to mitigate outages. And Anandot, which is based in Israel, claims it analyzed over 5.2 billion data points per day over six months to launch its log-monitoring platform.

But Coralogix — which has 60 employees and expects to reach 100 by the end of the year — has already managed to grow its client base to over 1,800 brands, among them Lufthansa, BioCatch, Fiverr, KFC, and Caesars Entertainment. (500 customers came onboard in the last six months alone.) In August, it expanded to India with an onsite team to offer customers based in the country regional server and data storage capabilities.

RELATED NEWS
PS5 Entertainment Apps Include Netflix, Disney+, And Twitch, But No HBO Max
Amazon embraces end-to-end models to improve Alexa’s speech recognition
TeleSense raises $10.2 million to monitor crops with AI and sensors
PS5 Preorder Details: Console Bundle Available At GameFly–Act Fast
Recent Posts
This website uses cookies to improve your user experience and to provide you with advertisements that are relevant to your interests. By continuing to browse the site you are agreeing to our use of cookies.Ok