You are here:
Home / We Need More Heist Games Like Kasumi’s Loyalty Mission In Mass Effect 2

Every single loyalty mission in Mass Effect 2 is great. I’ve already written about Tali’s specifically being video game perfection, but given enough time I could write about all of them. Jacob’s is the most interesting thing about him, Samara’s is a masterclass in non-combat mission design, and Legion’s brings new depth to the previously misunderstood geth. Miranda’s is the only shaky one in my book, and even then there’s some worthwhile intrigue and a solid resolution. Of all the ones that could stand alone as their own game though, Kasumi’s is head and shoulders above the rest, and reminds us why we need more heist games.

Kasumi’s loyalty mission involves stealing her late partner’s greybox from Donovan Hock – think of it as a ship’s blackbox, but for memories. It turns out Hock had been unable to open it, and the mission ends with a dilemma for Kasumi; she can either wipe the greybox and lose those memories to keep herself safe, or keep the memories with her forever but never know true safety ever again. It’s a tough choice. Even wiping the greybox, Kasumi will keep her own memories, but she won’t have the visual reminders of them, nor Keiji’s perspective. Plus, it’s not like every criminal in the galaxy will simply believe her when she says she has wiped it, and she’s made enough enemies on her own.

If she does keep them, what does that mean? Is she ever embracing and coping with her grief, or is she avoiding it by living in old memories? And for a woman whose lifetime of thievery has made her rich enough that she’ll be secure for the rest of her days – days that might be numbered as she heads for the suicide mission – what does it matter how she deals with her grief? 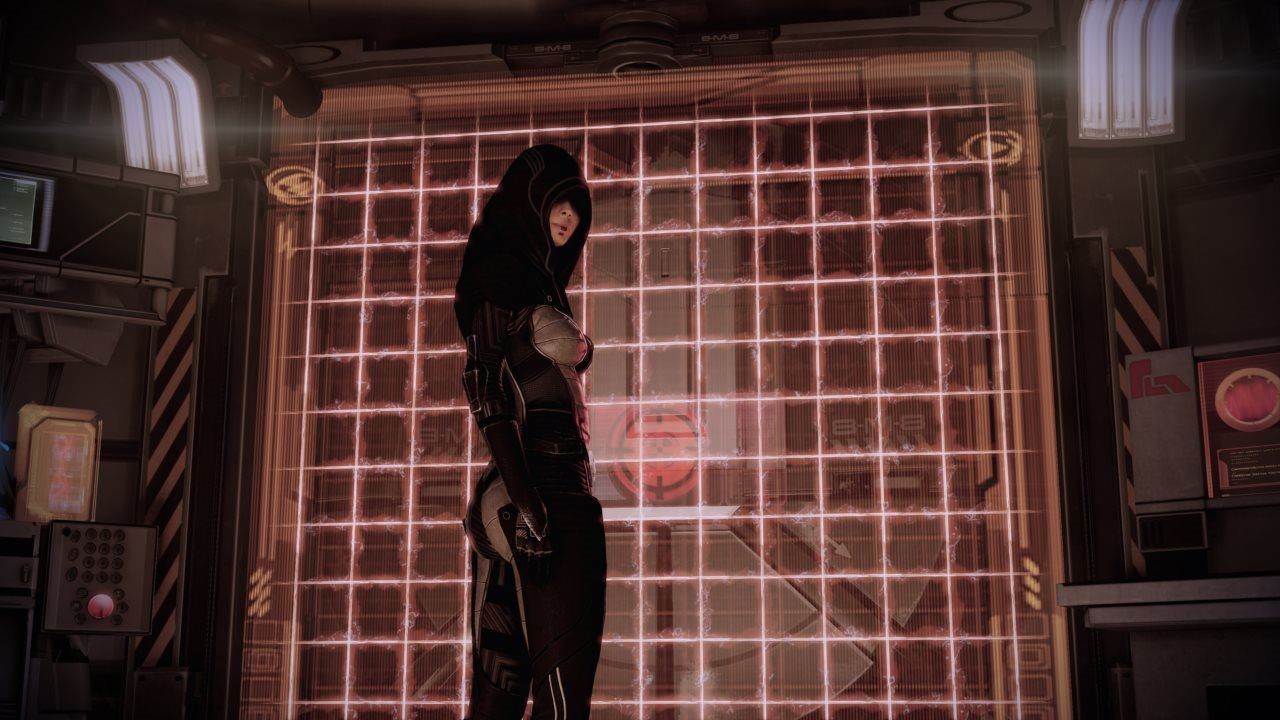 Kasumi’s loyalty mission is laced with personal narrative and ends in one of the smallest yet most powerful decisions in the Mass Effect trilogy, but it’s not that moment alone that makes it such an achievement of design. On a raw gameplay level, Kasumi’s quest takes a completely different approach from the rest, and it’s through this that we see the need for heist games.

The mission revolves around you breaking into a safe, and that means finding DNA, hacking data pads, toying with the power, taking out guards, and schmoozing guests. Since Mass Effect is not designed for these types of quests, it can be a little bit simplistic at times, but the core of a great mission is there. Even restricted by Mass Effect’s combat heavy game design, you’re able to explore Hock’s party with a level of depth and interaction not available in any of the other locations throughout the sequel.

Heist themes are involved in some other games, but with Kasumi’s mission obviously significantly shorter than a full length experience, it has more permissions to take things slow. It’s a palette cleanser from Mass Effect 2’s many shooting galleries, and even then, it doesn’t quite stick the landing. After the intrigue of the set up, the mission ends with you fighting a jet. Yeah, an actual jet. No, you don’t get one too, you just stay on the ground firing off pot shots and lining up your heavy weapons.

Weirdly, for a finale so action-packed, it’s all a little anticlimactic. It just ends with a boss battle, like a lot of other missions, rather than committing to the heist bit completely. Games like Hitman, which also take in themes from heist movies, have a similar issue. The heist is just the set up – you still need to kill people, and because of the way Hitman works, you always have the option to do it in ridiculous and violent ways. A true heist plot has no violence whatsoever, apart from possibly knocking a guard out so you can steal their uniform. It’s all about brain and intellect, about moving through a crowd like water. Direction and misdirection, a sleight of hand and a twist of fate – the heist is all about the allure and the glamour.

There’s a clear winner and a loser to heisting, which you’d think would make it perfect for gaming’s often binary view of victory. But these wins are often achieved without violence, and that’s something gaming often struggles to understand. Even Kasumi’s mission doesn’t quite get there, but I hope a game in the future is able to pick up the first half of her mission and run with it.