You are here:
Home / The Planet Crafter: Prologue Brings The Best Of Subnautica And Cookie Clicker Together At Last

The Planet Crafter: Prologue Brings The Best Of Subnautica And Cookie Clicker Together At Last

If there was a way to liquify the survival/crafting genre and inject it directly into my bloodstream, I would do it. There’s something about punching trees and turning useless junk into useful tools that really gets my engine going. I’ve never been much into base building, so I prefer exploration-focused games like The Forest and Raft to the more creative-focused games like Minecraft and Valheim. The Planet Crafter: Prologue, which launched on Steam last month, is my latest survival/crafting obsession. It combines the exploration of Subnautica with the hyper-addicting progression of an idle game in a way that feels custom-made to ruin my life. I’m glad that the prologue is a limited sample of what The Planet Crafter has to offer, because if it didn’t cut me off after a few hours I may not have been able to stop.

At first blush, The Planet Crafter doesn’t look like much. The first 30 to 40 minutes begin just like Subnautica or Breathedge – you can leave your pod and collect resources in the immediate vicinity, but you’re restricted to a short range because you only have a few seconds of oxygen before you have to run back to the pod. You’ll need to spend sometime gathering cobalt, iron, titanium, and silicone scattered rather unnaturally around your pod until you’re able to craft the upgrades necessary to venture out further, like a bigger backpack, oxygen tank, water bottles, and a flashlight.

The goal of The Planet Crafter is not immediately clear. After making the first few upgrades, the quest log vanishes and you’re left on your own to figure out where to go and what to do. I found myself building whatever I had the resources available for just to figure out their function. After constructing a drill and a wind turbine, followed by reading a series of information screens in my pod, I finally realized the goal of The Planet Crafter: terraforming a desolate planet into a living, breathing world.

To do that, there are three development categories to pursue: pressure, heat, and oxygen. Pressure is created by drilling into the ground, heat is created by building heaters, and oxygen is created by growing planets. Setting down drills is simple enough, but they come at an energy cost – hence the wind turbines.

Heaters require iridium, which you won’t be able to find near your starting pod. The same goes for vegetubes, which require a seed in order to grow plant life. To continue the terraforming process, you’ll need to venture out to the various crash sites around the planet and strip them for materials. With the right resources, you can build bigger and better drills, heaters, and vegetubes that will continuously speed up the terraforming process.

The Planet Crafter isn’t at all concerned with the aesthetic or organization of your terraforming machines. You can put a drill down anywhere on the ground and it will instantly increase your pressure production by .02 /s. If you run out of power, you can build a wind turbine or a solar panel anywhere in the world and plot it down. There are no wires to run or connections to make. Whatever you build will contribute to the entire system no matter where you build it.

It may seem overly simplistic, but that efficiency allows for more exploration and adventuring. At least in the prologue, there’s no reason to put down roots and build a main hub anywhere. Just grab the valuable resources, build your machines right where you are, then move onto the next point of interest. Survival/crafting games tend to get bogged down by resource gathering and finicky systems, particularly when you’re spending a lot of energy on building bases, but The Planet Crafter knows how to keep things moving. 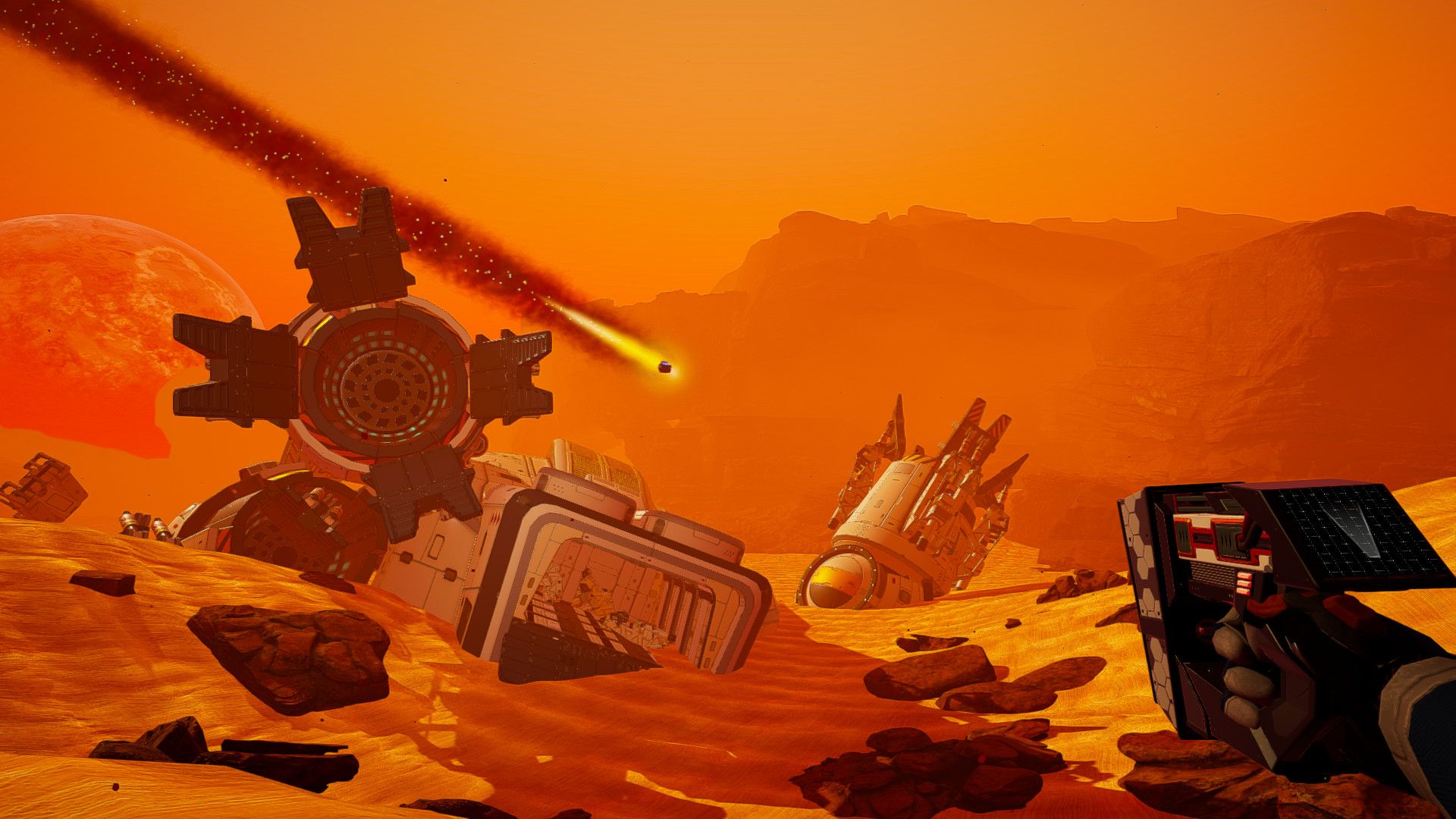 The three arms of terraforming are supported by individual progression paths that automatically unlock new blueprints as you build up pressure, heat, and oxygen. The first heater only produces 0.3 heat per second, but the upgraded heater produces 4.5. Both heaters use the rare resource iridium, so if you want to maximize production you’ll need to return to old bases, deconstruct your outdated machines, and build new ones in their place.

As long as you have enough solar panels to keep the system running, your machines will work automatically, making constant progression towards your next terraforming goal and blueprint unlocks. Once all three processes are going, The Planet Crafter takes on an idle game quality that I really dig. Using your resources to build the highest quality machines makes your numbers go up faster and every blueprint you unlock has the potential to increase production exponentially. I occasionally found myself staring at my Terraformation monitor just watching the numbers go up. It’s like Subnautica and Cookie Clicker had a baby, and I can’t get enough of it.

The world is, as you might expect, a fairly desolate wasteland, but there are some surprises and interesting sights to see. Your main points of interest as you explore the world are just crashed spaceships that are full of rare resources, but you’ll also find some rare materials growing naturally in special places around the planet. There are also weather events that will shock and surprise you, especially if you happen to be far from shelter when they occur.

The prologue ends when you complete the first stage of the terraforming process and turn the sky from red to blue. I can’t think of another survival game that rewards progression by way of global changes to the environment, so it was exceptionally cool to see the sky turn blue and know that I did just that. Trailers for the full game show a remarkable development to the ecosystem as you progress through the terraforming stages, and I can’t wait to see how the world changes as I progress through the game.

The Planet Crafter isn’t for everyone. It’s not particularly impressive looking, there isn’t much of a story, and there’s no combat (so far). For self-motivated survival fans that like the exploration and character progression of games like Subnautica and Breathedge, however, The Planet Crafter hits all the right notes. Check out the two-hour prologue now available for free on Steam.