You are here:
Home / The DualSense Feels Like It Was Made For Ratchet & Clank

The DualSense Feels Like It Was Made For Ratchet & Clank

Now that reviews are out, you’ve probably seen a lot of people claiming that Ratchet & Clank: Rift Apart is the first game that truly feels next-gen. Frankly, I don’t necessarily agree with that sentiment. If you ask me, Rift Apart feels like classic Ratchet & Clank with a shiny coat of paint. The rift bounding turned out to be a pretty exaggerated part of the marketing, and the gameplay hasn’t evolved much beyond what we saw in Ratchet & Clank on the PS4, or even the Future trilogy for that matter. I love Rift Apart, I’ve 100% completed it twice and written a dozen guides for it. But does it look and play like the first true next-gen game? Nah, not really.

On the other hand (or in both hands, so to speak) Ratchet & Clank: Rift Apart feels like a major evolution. So much so that when the DualSense was being developed with all of its bells and whistles, I have to imagine that it was being made with Rift Apart in mind.

Ratchet & Clank: Rift Apart isn’t the first game to utilize the DualSense well. It’s not even the first Insomniac game to use it — that distinction belongs to Marvel’s Spider-Man: Miles Morales. But I think what really sets the DualSense support apart in Ratchet & Clank is the purposefulness of the haptic feedback. Very little of the DualSense functionality feels tacked on or gimmicky. Frankly, It’s not something I’m used to with PlayStation hardware. The DualSense features are integrated into Rift Apart so seamlessly that I would strongly recommend against playing the game without them.

PlayStation fans are used to gimmicky features in games, especially towards the beginning of a console generation. Did anybody really need to hear the dialogue come out of the controller in Killzone Shadow Fall? When Until Dawn makes you slide your finger on the touchpad to strike a match, did it enhance the gameplay experience at all? The most novel and interesting experiences that the DualShock 4 could offer, like turning it sideways to spray paint in Infamous: Second Son, still feel like nothing more than parlor tricks. Even before that, Sixaxis was terrible and no game ever made me feel like it was an essential feature.

But the DualSense is different, and Ratchet & Clank has really won me over on the potential for the device. Part of the key to the DualSense’s success is that it doesn’t ask you to use the controller in a fundamentally new way. You don’t have to learn to use the touchpad or turn the thing upside down to experience its new features. All of the functionality is built right into the normal ways you use it. 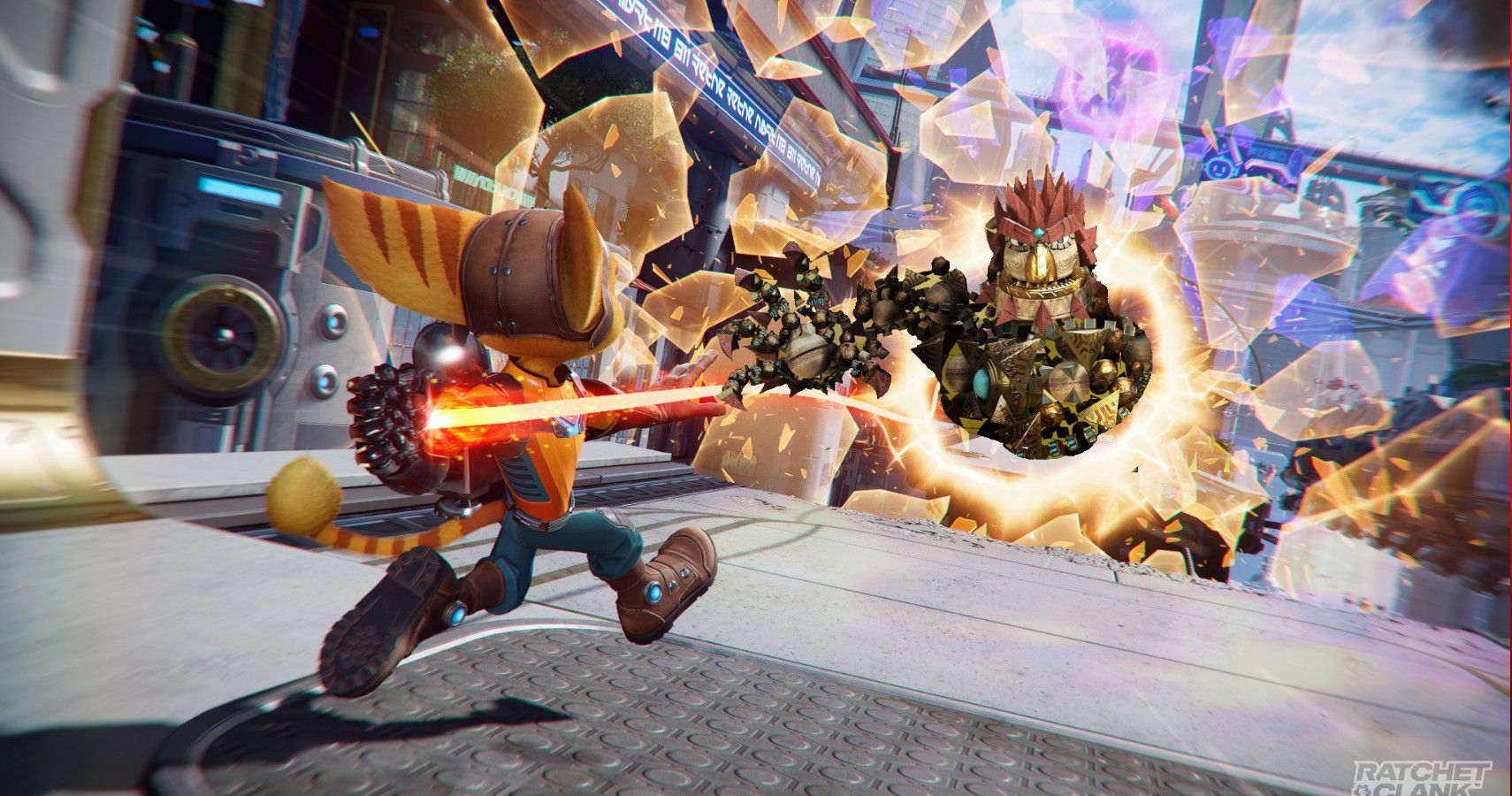 What the DualSense does is a lot more baked in. The adaptive triggers, haptic feedback, and sound all work together throughout every moment in Ratchet & Clank to create the feeling that the world of the game is in your hands. There are 18 weapons in Rift Apart and every single one of them feels completely different to handle. In fact, almost all of those weapons have multiple fire modes, and even each individual fire mode feels completely different. You’re going to feel different levels of resistance and recoil in the trigger of course, but you’re also going to get different types of feedback in different places on the controller when you equip a weapon and fire it. The rapid-fire lightning strike, for example, gives you quick little bounces on the trigger and a fast buzz on your palm that creates a tingling sensation when you hold down the trigger, as if you’re actually firing bolts of electricity. In contrast, the shotgun-like Executor gives you a lot of resistance on the trigger until the moment you fire the giant burst of energy, then it hits you with a deep pulse in both hands to really make you feel recoil. Even the throwables, like the hand grenade-style Shatterblast or the minion-summoning Apocalypse Glove each have their own vibration pattern and trigger feel when fired.

But the sound is just as vital to the experience, even if it’s a lot more subtle. Rift Apart nails the sound design of the DualSense by matching the effects to the audio you would actually hear coming from devices and objects in your hands. Every weapon makes a sound when it’s equipped, every bolt makes a sound as it flies into your hands, and all of Ratchet’s gadgets — from the hover boots to the omniglove — have their own audio effects in the DualSense. You won’t hear a single sound echoed from the screen to the controller. Everything that comes out of the controller is specifically designed to be heard in that way, and even when audio effects are layered, as is the case when you activate your hover boots, the multiple audio tracks work together to create a singular effect.

I think the DualSense is ultimately what will end up defining the “next-gen experience” for me. The SSD is important, and tech like ray-tracing and nanite geometry are going to have a huge impact on the way games look. But the diminishing returns in visual fidelity are hard to overcome, and there’s only so far that new mechanics and level designs can take us. The DualSense really feels like the evolution we’ve been waiting for. Interactive peripherals like the DualSense and VR are helping us take those first big steps through the looking glass. If you were to play Rift Apart without the DualSense, you’d be missing a big important part of the experience. If that’s not next-gen, I don’t know what is.