You are here:
Home / The Companions Questline Is The Best And Worst Of Skyrim

The Companions Questline Is The Best And Worst Of Skyrim

It's been a long time since I sat down and actually played Skyrim. I've dipped in and out regularly over the years to try out mods or explore and take screenshots. But this weekend I decided to get deep into some good old-fashioned questing. Emerging from a dragon-roasted Helgen, I ignore the game's attempts to nudge me towards Riverwood and my Dragonborn destiny. Skirting the village through a forest, I head straight for Whiterun, where my decision about what questline to pursue is made for me. I see a group of warriors in the distance killing a giant. One of them, a tall Nord with a woad-splattered face, says she's a member of the Companions, who are Skyrim's answer to the Fighters Guild.

Realising it's been ten years since I last finished these quests, I decide to join this gang of giant slayers. The woman, calling herself Aela the Huntress, scoffs at the idea—but that's always the way in the early stages of these faction quests. "You don't have what it takes to join us, rookie," snarls some grumpy old veteran. Then, a few quests later, you're the leader of the whole organisation. It's one of my favourite Elder Scrolls clichés, turning up out of nowhere, a stranger, then ending up with a house, a title, maybe a nice weapon, and the respect of a group of people who didn't even know you existed a few in-game days earlier. It's a particularly egregious example of Bethesda's shallow writing, but it's also a lot of fun.

One of the best things about this questline is getting to know the Companions themselves. As you explore Jorrvaskr, their cosy mead hall hangout, you learn about their personalities, relationships, and quirks—either by talking to them directly, or through overheard conversations and journal entries. You learn about a possible secret romance between Aela and Skjor, a Dunmer called Athis and his struggles to adjust to the Nord way of life, and leader Kodlak's worries about not being accepted into Sovngarde, the Nord afterlife. They're not especially deep or nuanced characters, but the more time I spent with my fellow Companions, the more attached I grew to them. 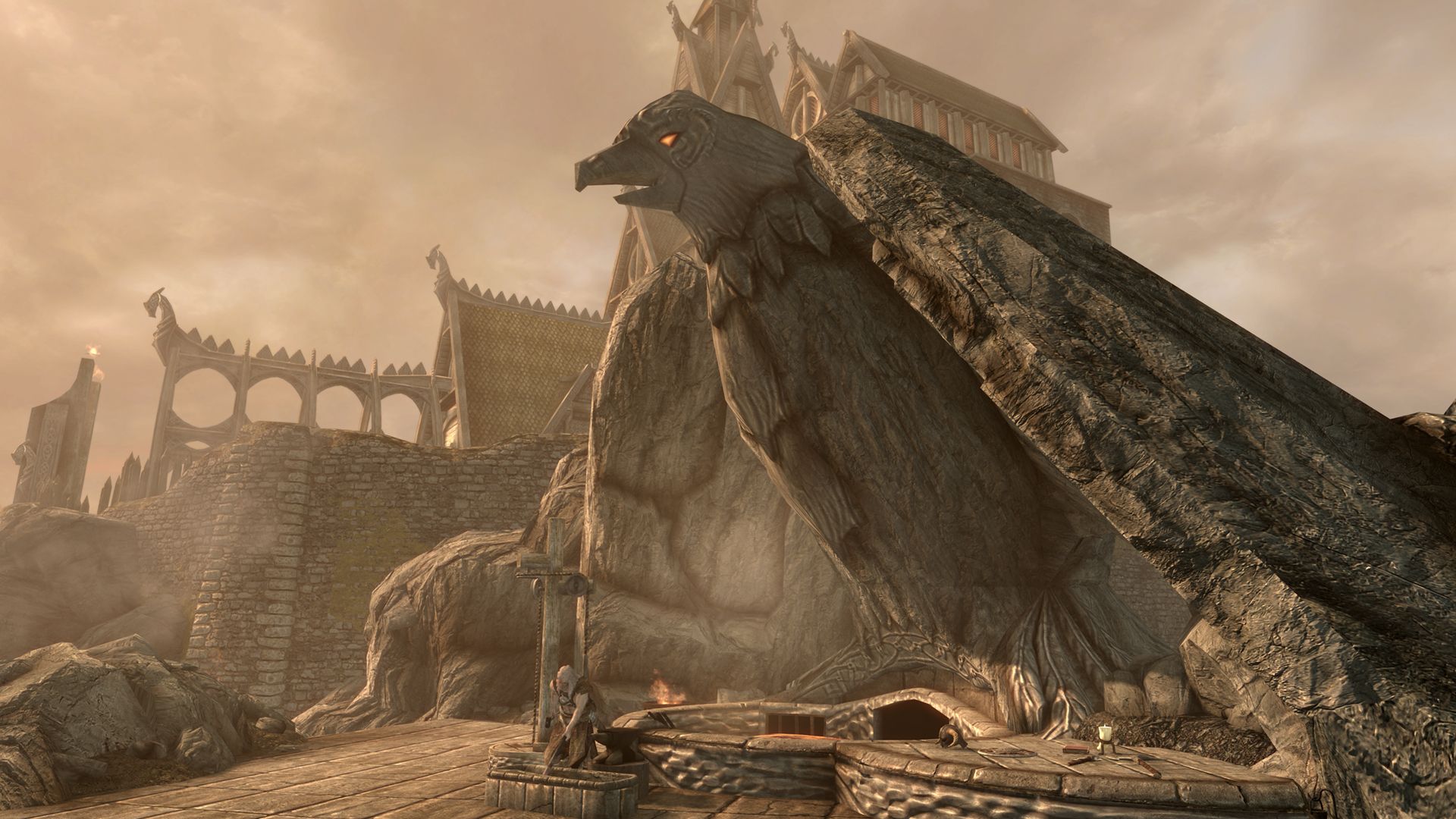 It's a superb little self-contained soap opera, which is something Skyrim does incredibly well—creating a rich sense of community, with characters who are tangled up in each others' lives. Things get even more complicated when you discover that the Companions are secretly werewolves. It's a wild twist, and you even become one yourself, transforming into a hairy, stinky beast and tearing people apart with your claws. That's entertaining enough, but the Companions' personal struggles with their lycanthropy is also the source of some enjoyable, nicely written character drama. Some of them, like Aela, love the unholy thrill of the hunt. Others, like the brothers Vilkas and Farkas, try to resist their beastly bloodlust.

This secret is why Kodlak is scared he'll be denied entry to Sovngarde, and curing him of his lycanthropy becomes a major part of the questline. You can also cure yourself, losing the ability to transform into a werewolf, as well as several other members of the Companions. I appreciate how the game isn't just like: hey, isn't being a werewolf cool? Bethesda is often guilty of this in its RPGs. Instead, the writers focus just as much on the dark side of the disease, and how it negatively impacts the everyday lives, and souls, of the people afflicted. In terms of plotting and character motivation, this is quietly one of the best questlines in the game—and one where I actually find myself caring about the people involved.

I just wish the quests were better. Most of the actual adventuring in the questline involves delving into dingy bandit lairs and ruins, clearing a path through repetitive waves of enemies to fetch some item or other. For me, the dungeons have always been the weakest part of Skyrim. It's glaringly obvious that they're all stitched together from the same handful of prefabricated parts, and they rarely tell interesting stories—something Infinity Engine RPGs like Baldur's Gate and Icewind Dale mastered years earlier. They're like a chore to fulfil before you're rewarded with your next nugget of story, rather than a memorable part of the quest itself, which feels even more pronounced playing Skyrim in 2021. 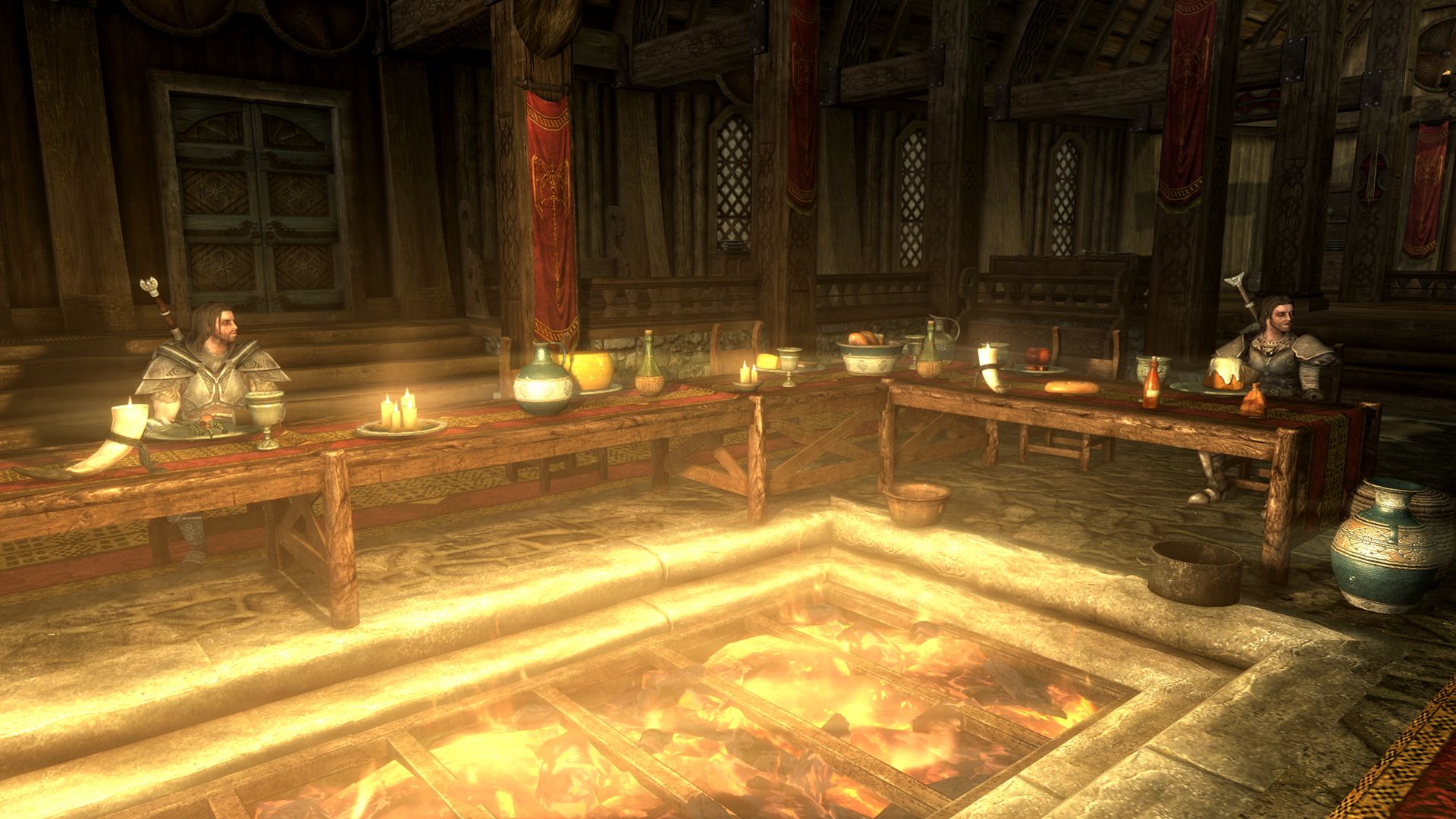 This is my biggest problem with Skyrim. It's great at creating an evocative world and filling it with intriguing tales, but the core of the game—fighting monsters in dungeons—is deeply unremarkable. The story in the Companions questline is fantastic, and I really wanted to see it through to the end. That's what kept me going. But with every new task that sent me into yet another underground network of tunnels filled with Draugur and Skeevers, I kept feeling the urge to quit. This isn't just a symptom of it being a ten-year-old game: the dungeons were boring in 2011 too. I think I was just more willing to put up with it back then. Today, with less free time and a growing pile of shame, I don't feel like it's worth it.

It also highlights how Skyrim just isn't very engaging as a role-playing game. As you work through the quests, there's no sense that you're making impactful decisions, or that you have any meaningful control over how your character reacts to, or grows from, the things happening to them. It's fundamentally just a series of dungeons linked by a linear story that you have no real say in. Compare this to games like Pillars of Eternity or Disco Elysium, where the things you say and do actively sculpt your character into someone distinctly yours, and Skyrim feels less like an RPG and more like a fantasy action game pretending to be one. This makes the game, from a role-playing perspective, feel rather hollow.

But still, I saw the quest through and, yes, became the leader of the Companions. Well, they don't actually have leaders—as their Harbinger, I'm more of an advisor. That's another neat wrinkle in the Companions as an organisation, with some members rejecting the idea of being controlled. It's details like this that make this such a uniquely compelling faction, and not just the fact that they're werewolves. Some Elder Scrolls fans complained about Skyrim's lack of a Fighters Guild, but the Companions' distinctive philosophy and hidden dark side makes them a lot more interesting. Skyrim's writing is broad and simplistic for the most part, but this questline is proof that's not always the case.