You are here:
Home / The Big Question: What’s The Worst Game You Love?

The Big Question: What’s The Worst Game You Love?

We all have games we love, but know deep down are actually bad. Here's the thing, though: sometimes 'bad' games are good. Some of the best games I've ever played have been interesting 6/10s that might have been ridden with flaws, but boldly attempted something different or unusual. Here are some of the games TheGamer's editors have played over the years that we acknowledge have problems, but we love playing anyway. 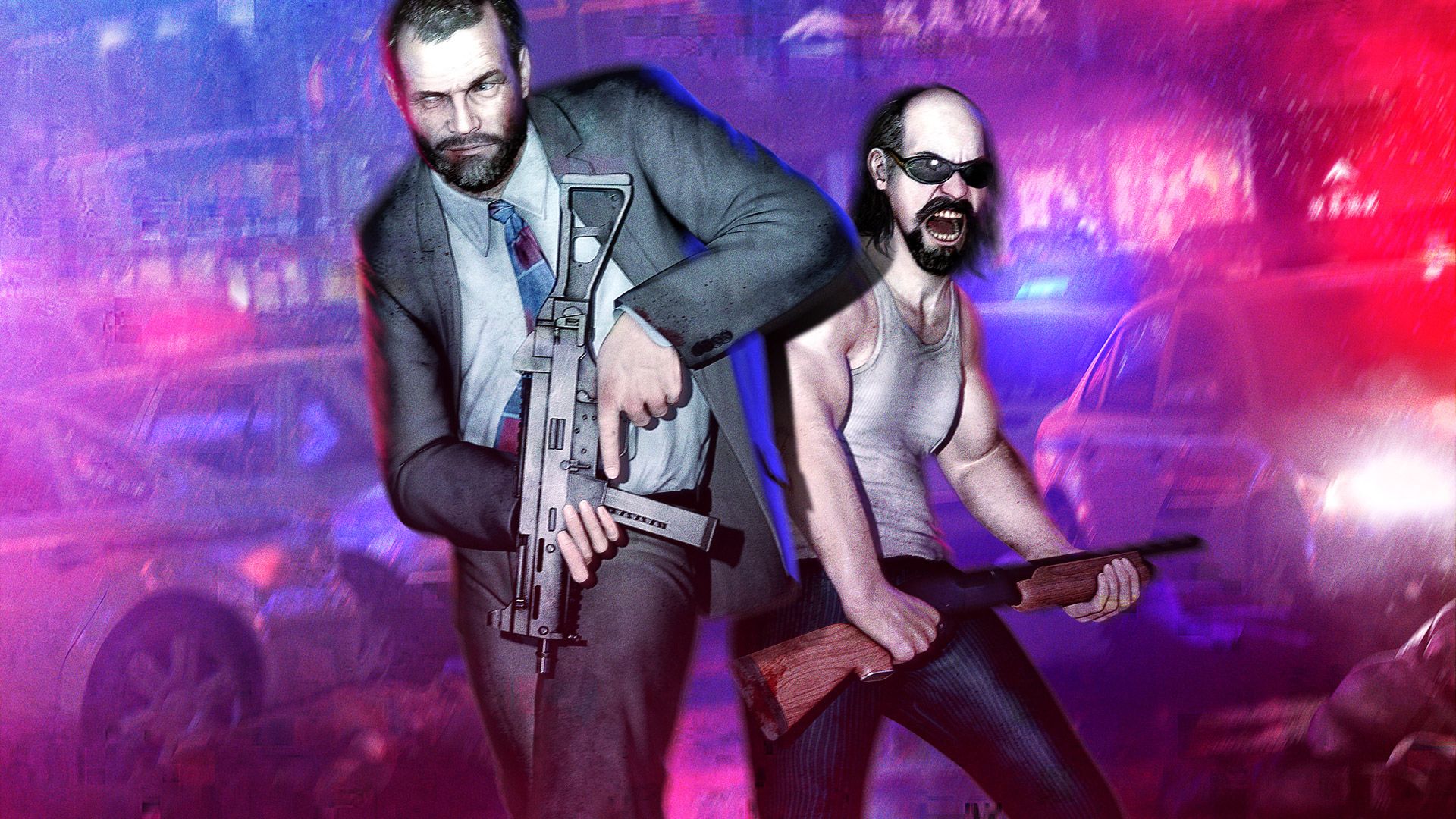 Kane & Lynch 2: Dog Days is a bad video game, and yet I keep coming back to it year after year. It's a tedious, repetitive, and gruelling third-person shooter that's so lean it's positively starving. All you do is shoot waves of enemies from behind cover for 10 hours. There are no interesting set-pieces or attempts to mix up the flow of the combat. It's a deeply unpleasant parade of non-stop misery, with some spectacularly uninspired level design, but I can't get enough of it. I love the grimy aesthetic and how it mimics the look of a handheld movie shot on a DV camera, then compressed to hell by YouTube. I love the wanton ultraviolence and the relentless pace. I love how when you shoot someone in the head, the mess is covered up by a splodge of censored pixels. It's just so horrible, and style over substance in the most literal sense, but in the case of these two assholes I'm cool with that. 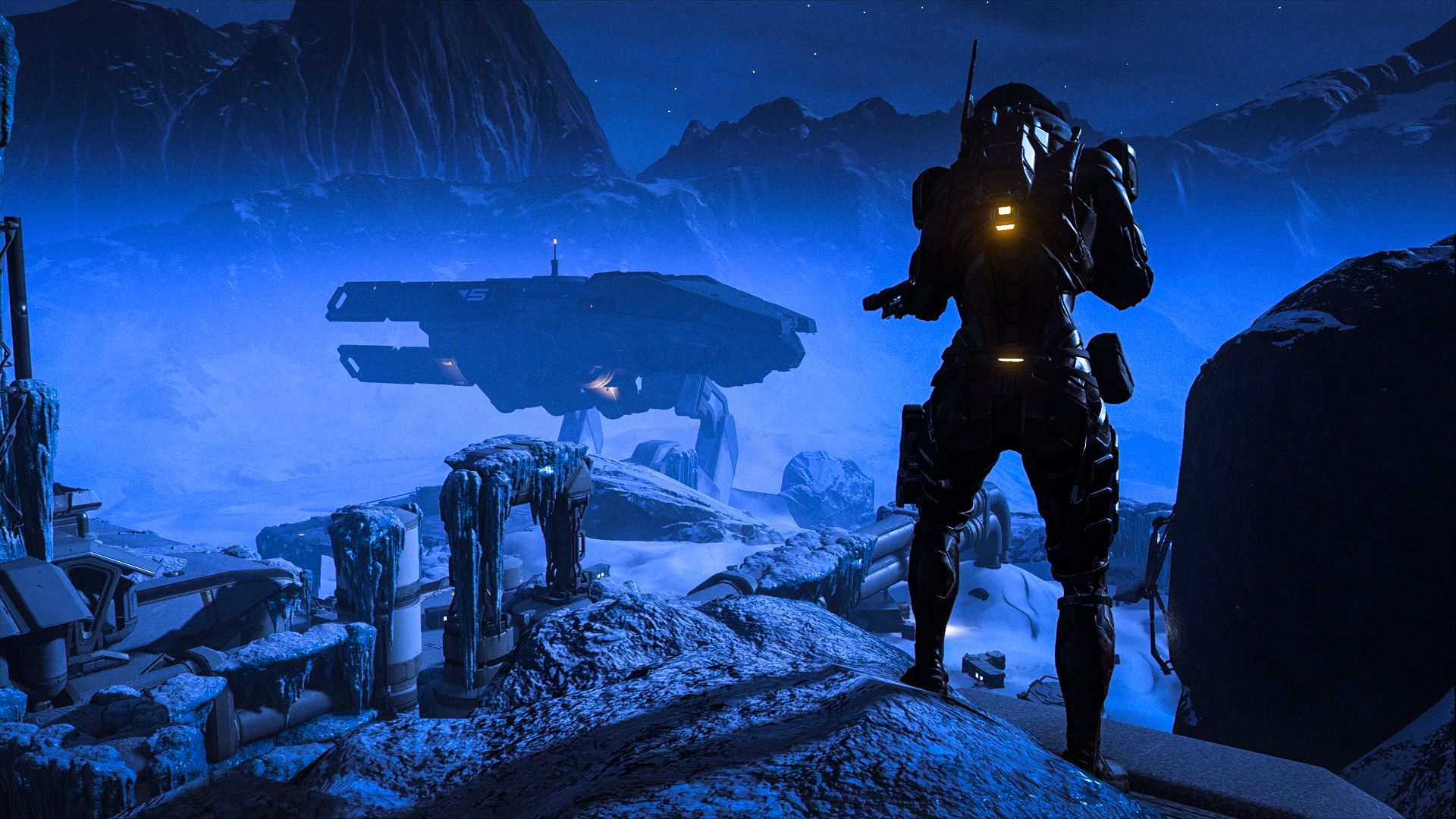 Mass Effect Andromeda. And I’m talking Andromeda at the height of its lackluster launch. Like so many Mass Effect fans, I dove headlong into the pool that is Andromeda, but instead of spluttering with outrage upon surfacing, I stayed pleasantly submerged in the absolute hilarity of that bug-riddled mess. My collection of game captures primarily consists of bugs and glitches that make me laugh, and I have a veritable treasure trove of recordings from my time with Mass Effect Andromeda. Terrible story beats, off-putting facial animations, and campy side quests further contribute to my unexpected love for this game. So damn if it hasn’t cemented its place in my heart alongside other more polished titles. 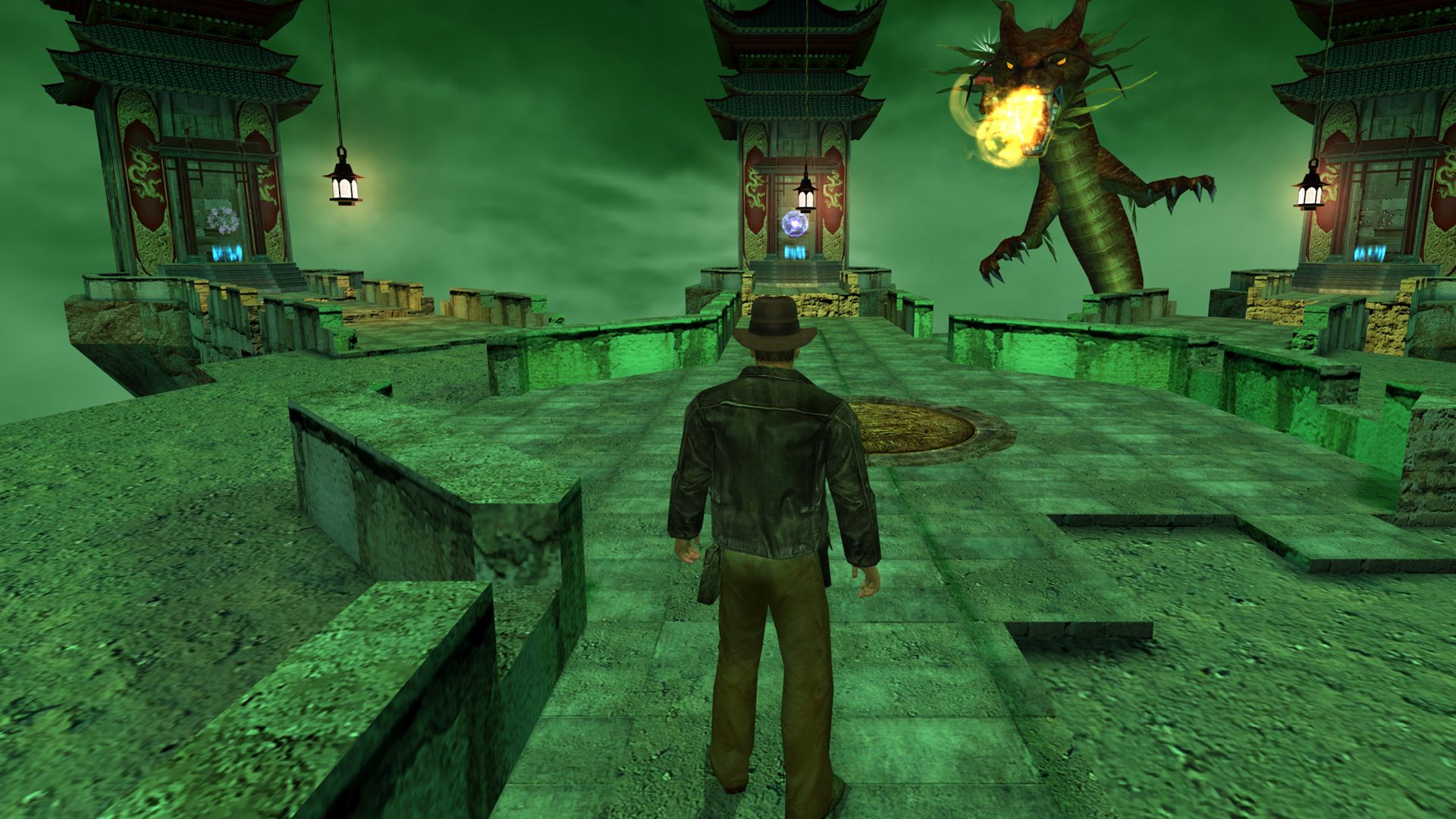 Indiana Jones and the Emperor's Tomb

Archeology is really my day job, so it should come as no surprise that I’ve always been a fan of the Indiana Jones games. While most of these are terrible, one of them in particular, Indiana Jones and the Emperor’s Tomb, is actually decent. The game was poorly received by fans and critics alike, so I can’t exactly call it good, but the title does more to make you feel like Indiana Jones than anything else in the franchise. You just have to look past a few questionable design choices and a whole bunch of bugs. When we finally get another Indiana Jones game, I’d probably switch over, but until that time comes, I’ll be sticking to this one even despite its fairly substantial flaws. 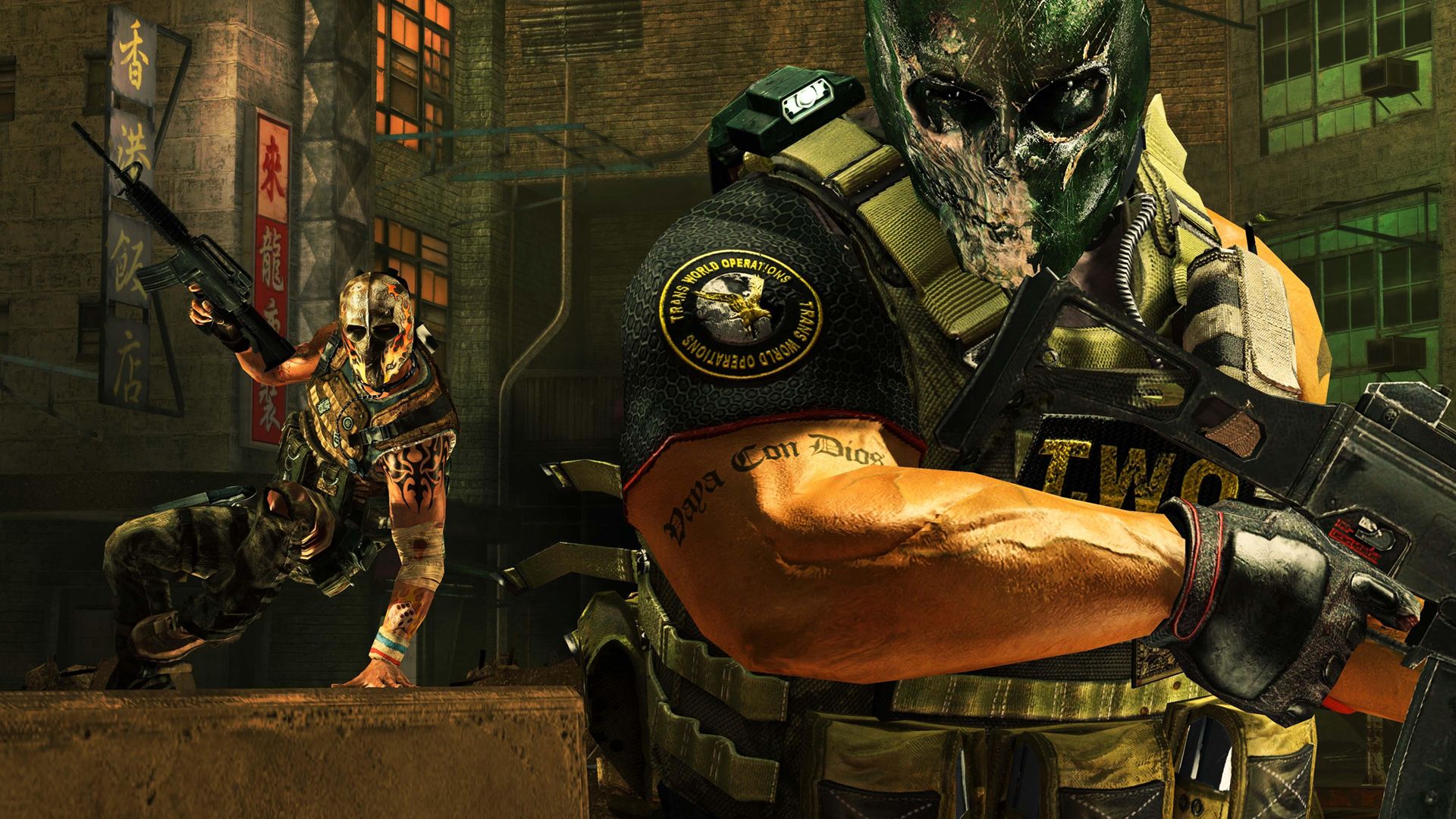 There’s one game I loved as a teenager but recently had a friend simply put it down after one mission when I tried to play it with them: Army of Two: The 40th Day. This third-person co-op shooter follows private military contractors Tyson Rios and Elliot Salem, two gruff, tatted up war dogs that absolutely fucking love it. They fight their way through scores of mercenaries tearing Shanghai apart, performing synchronised headshots and using an ‘Aggro’ mechanic where one draws fire as the other stealthily flanks. There’s also mandatory back-to-back shooting sections. The cherry on the cake is the over the top weapon customisation. You can add a dual drum magazine to a gold-plated, diamond encrusted submachine gun and throw on a screwdriver bayonet, it’s wild. It got mixed reviews, isn’t enjoyed by any of my friends today, and has some pretty cliche tropes and dialogue, but I love it. Watching my gun glint as the screwdriver finds an eye or neck will never stop being satisfying for me. 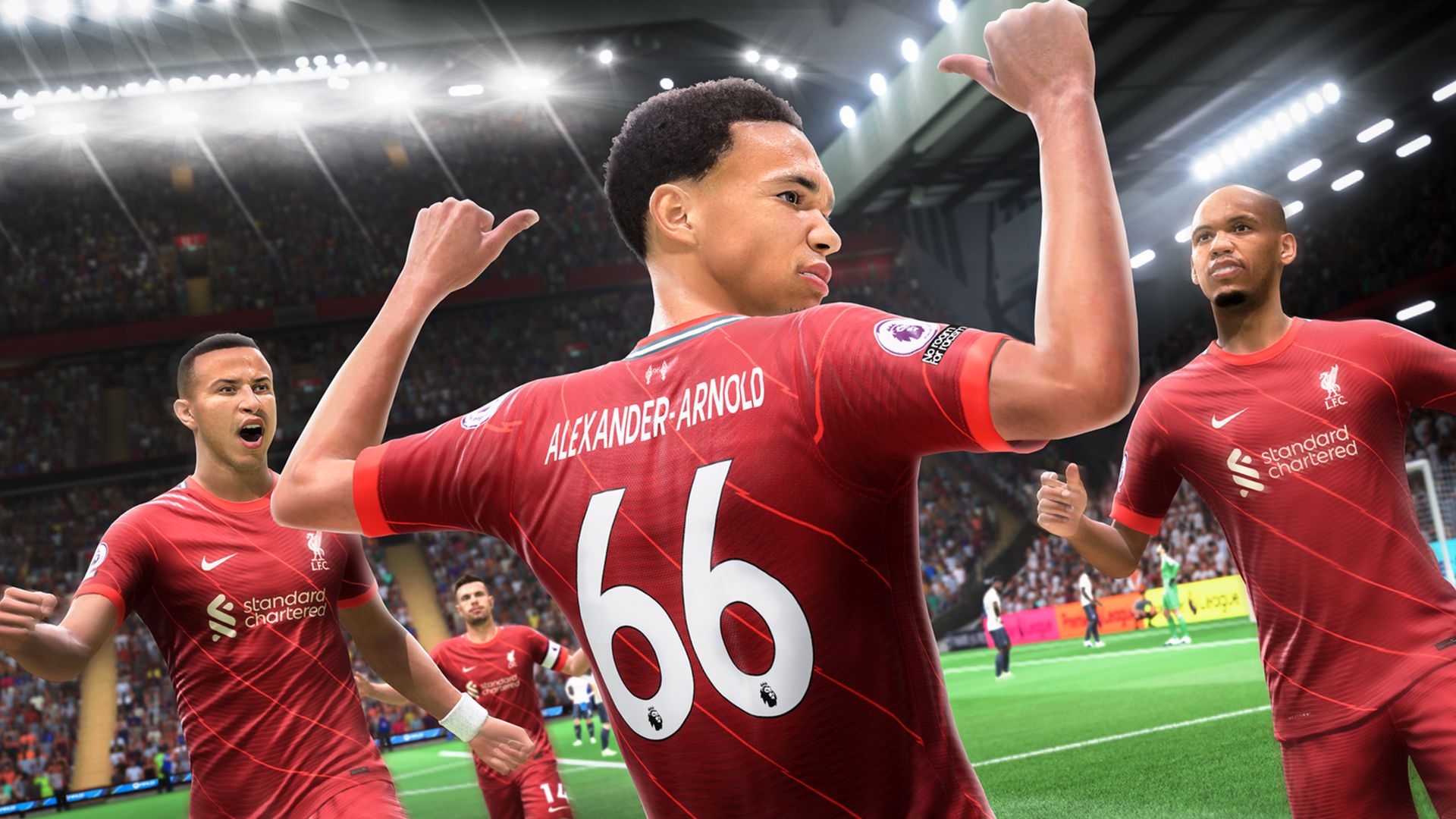 I had a long old think about this question, and have come to the conclusion that it’s FIFA. It’s a bit of a weird answer as FIFA isn’t a particularly bad game – and FIFA 22 is particularly good – but it’s the only game where I get sucked into the grind to the extent that I’m not actually enjoying myself – specifically in Ultimate Team. FUT Champions is a sweaty mess, but I need those red player picks. You can make your own fun, but you still come up against rage quitters or people sending shitty messages. Like, come on, this isn’t fun for either of us. I’m bending the rules of this week’s question, but FIFA is the only game I continue to play despite hating its ‘surprise mechanics’ and getting constantly annoyed by its grindy FOMO-inducing nature. Team of the Year? Sure, I’ll jump back in. 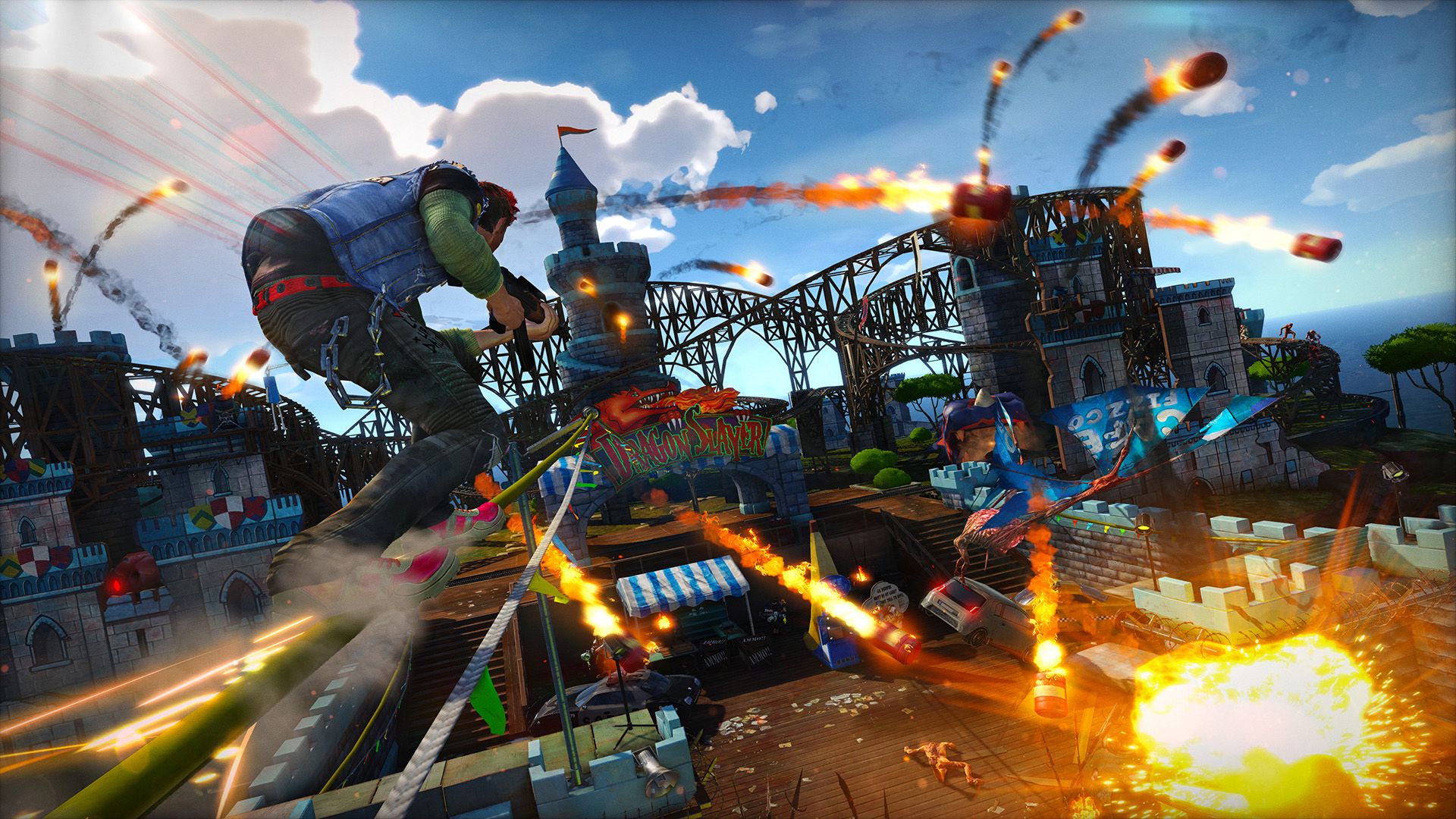 I’m not sure Sunset Overdrive is the worst game I love, but it certainly has the best ‘worseness to loveness’ ratio. There were dozens of games you might argue were masterpieces that came out last gen, but I’d struggle to find any that I enjoyed quite as much as Sunset Overdrive. Maybe Spider-Man, but then that’s just Sunset Overdrive with web-slinging anyway. I know the energy drink zombie storyline is stupid, but the thing is, so does Sunset. It’s very aware of its own stupidity. I think the Saints Row games only got better with time, so the cringe-inducing humour, nauseatingly colourful palettes, and wacky for the sake of wacky questlines are exactly what I need in a game. Keep your heartbreaking Sad Dad narratives and give me a gun that fires exploding teddy bears. 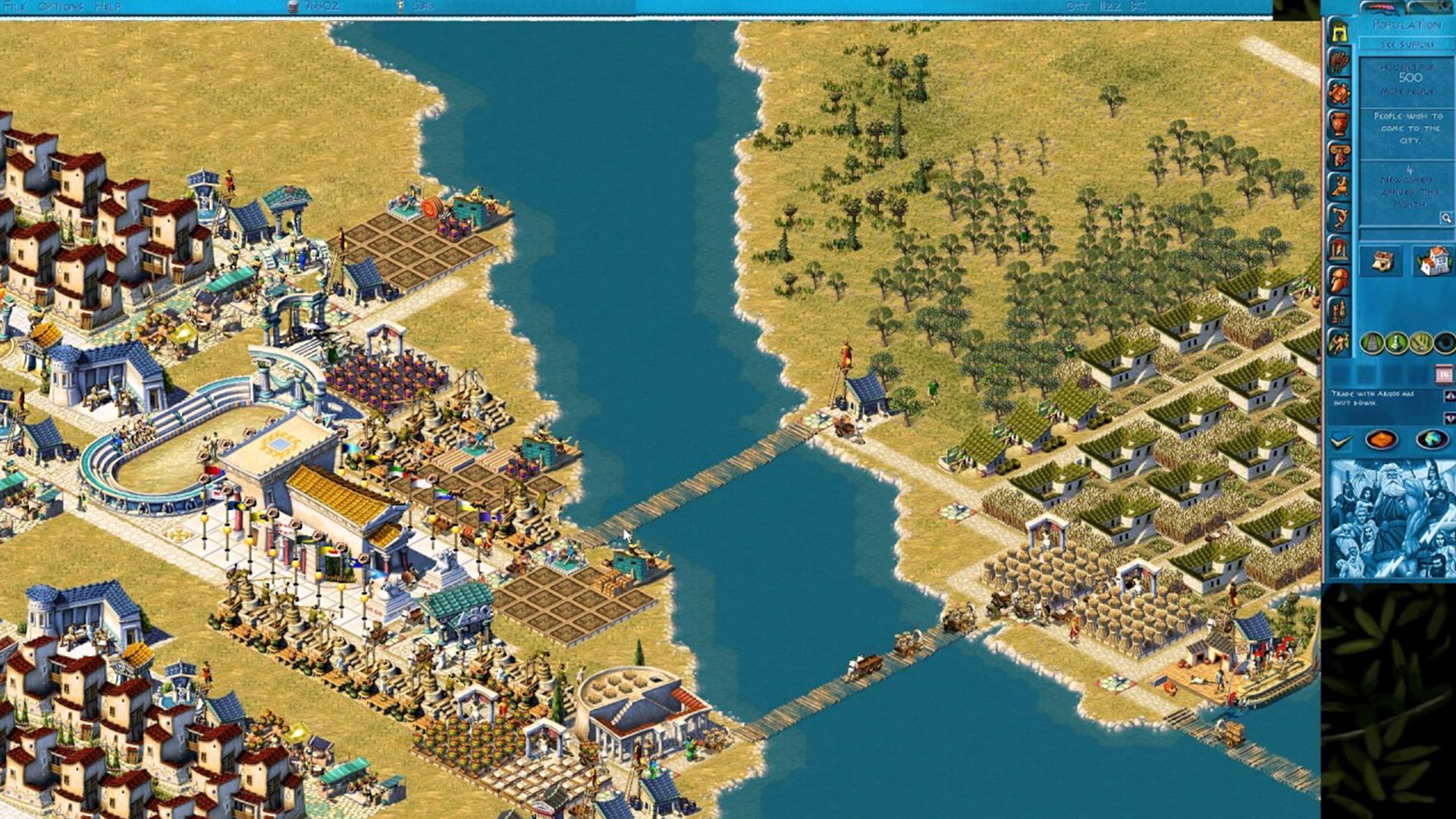 I’m going to say this game is a guilty pleasure of mine, but I don’t even feel guilty about loving it — Zeus: Master of Olympus. Build your city from scratch, encourage settlers, create trade routes, and accomplish whichever milestones or heroic missions you must complete. You can also recruit legendary heroes, worship gods, conquer others, and of course, suffer from maenads ripping your folk apart, but that’s all in a normal day in Ancient Greece, apparently. It came free with my PC about 20 years ago, and despite plenty of people telling me there are better civ-builders out there, I always come back to this game. Please excuse me while I go and install it yet again. 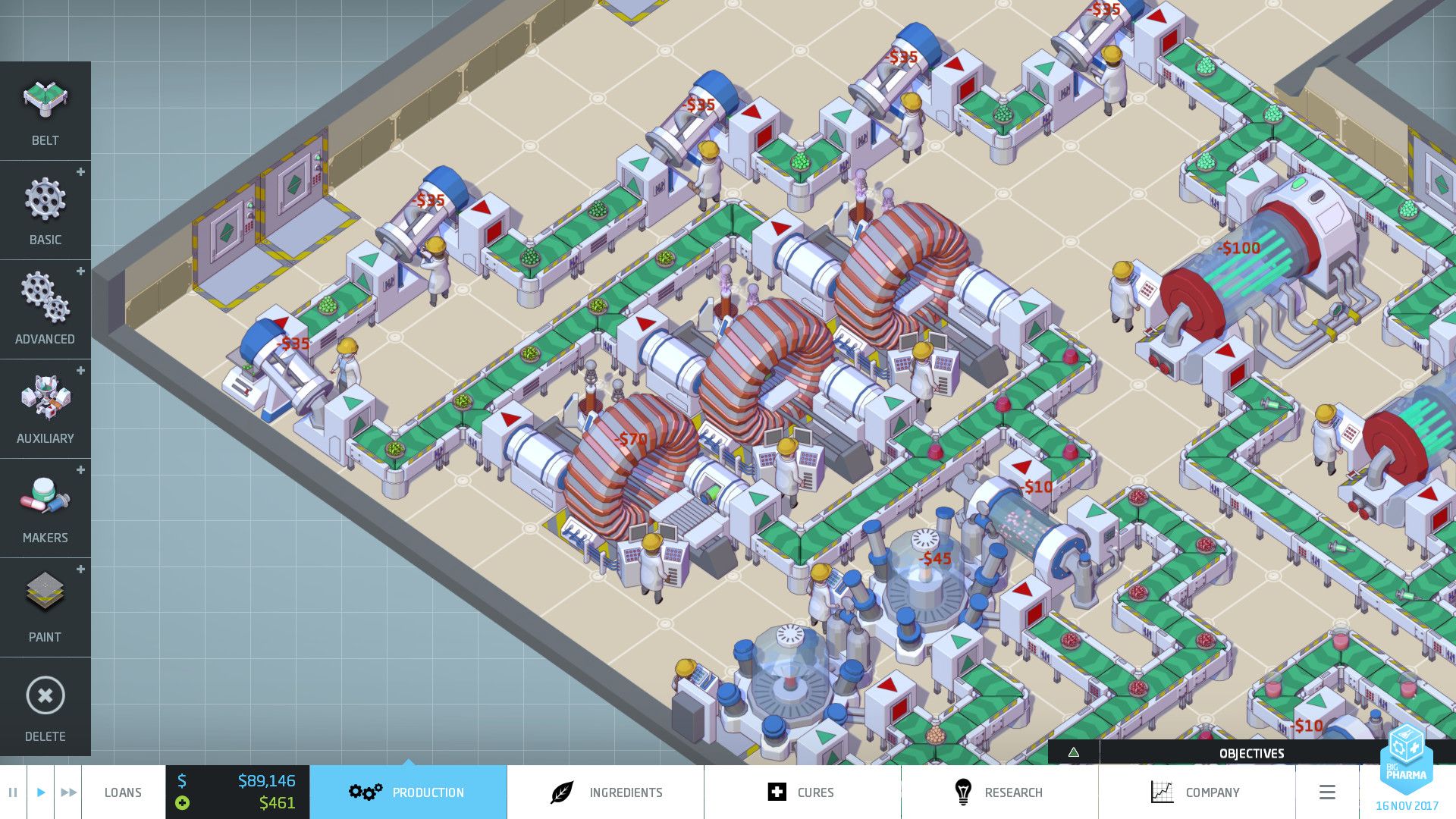 Did you know there’s a game called Big Pharma that lets you manufacture drugs? I did. I own it and it’s as bad as it sounds, yet I still play it. How about Cook, Serve Delicious? The game that lets you serve food in the worst looking restaurants you’ve ever seen, while keeping on top of a rodent problem? I also own that (and its sequel) and I won’t tell you how many hours played I have in both. I even play Dead Hungry Diner, which is like Diner Dash but with zombies. Unlike Meg, Zeus: Master of Olympus is currently installed on my PC, as well as Caesar 3 and Pharaoh. I still go back to them all on occasion, despite the aged mechanics and dated graphics. In short, if a game lets me build something I’ve likely played it and no matter how bad it is, I’m probably still playing. 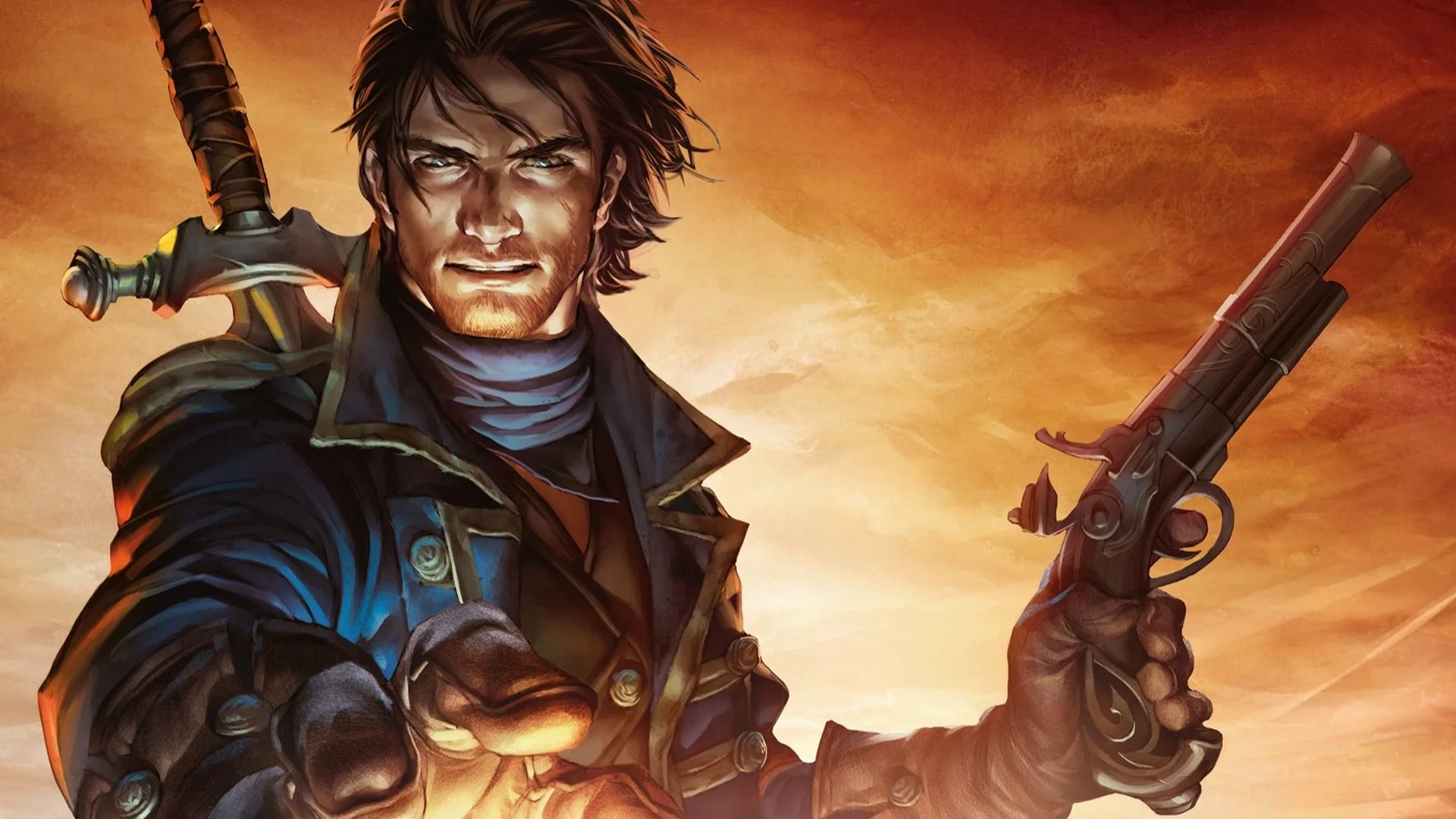 It’s so goddamn hard being a Fable 3 fan. Not only is it still dunked on by the gaming world at large, you also have to live with the knowledge that it will probably never get the remake it deserves. But someone has to die on this hill, and with my seven playthroughs in mind, it might as well be me. The setting of Fable 3 is hideously gorgeous, with the designers really capturing the feeling of the industrial revolution – walking through Bowerstone just feels oppressive. The new time period also brings us fantastic new characters, from industrialists to revolutionaries. Sure, it has its problems, but none of them are to do with the new backdrop, taking the series away from its fairytale roots. It’s a setting that deserves another go, and Fable 4 shouldn’t shy away from it. 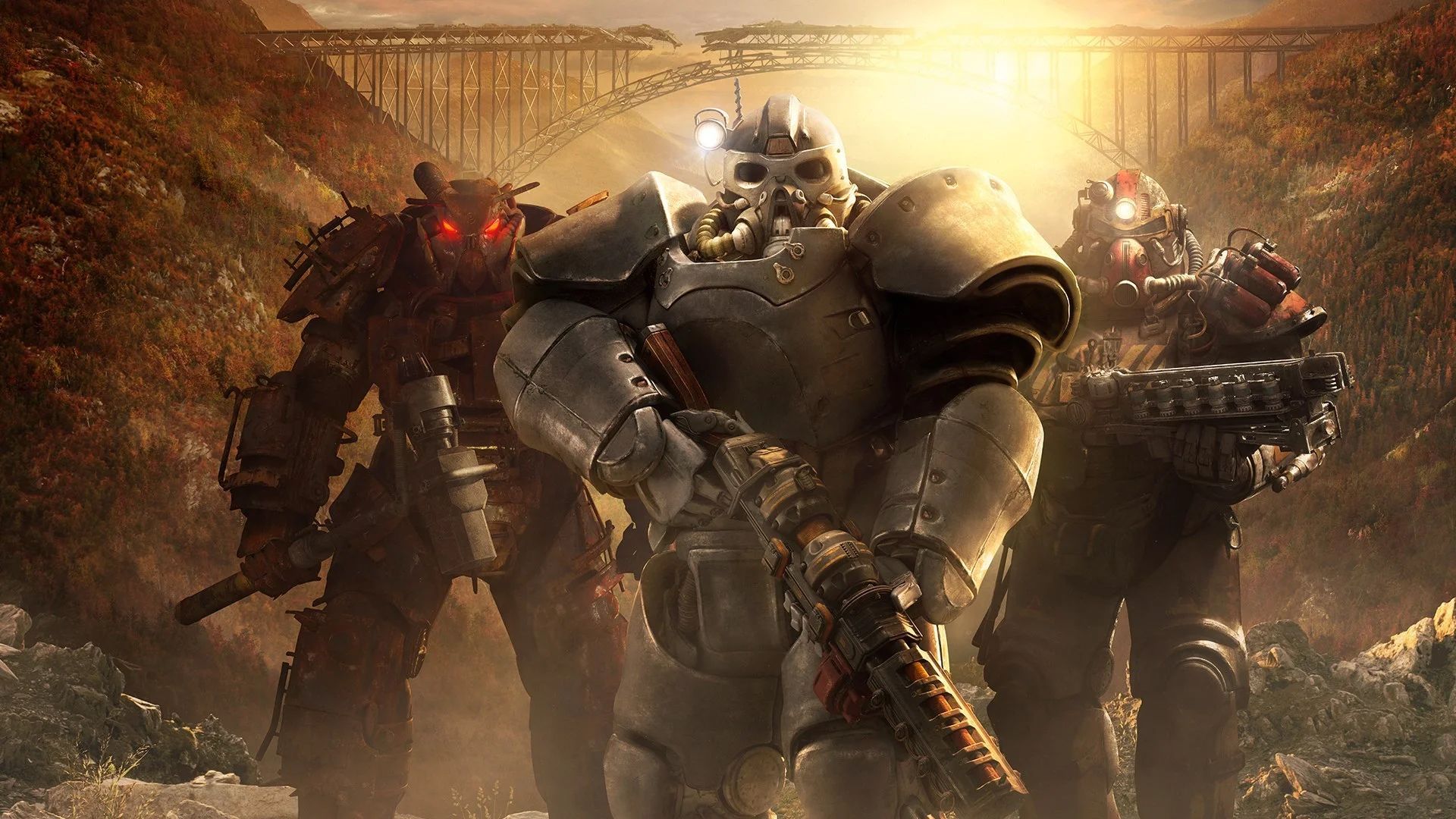 I admittedly fell off the bus afterward, but I dumped an obscene number of hours into Fallout 76 when it first launched. It’s been a couple of years since I played at this point, but seriously, there’s either something wrong with me or there was something oddly satisfying about how ridiculously empty 76’s open world was. Yeah, you’d stumble across the odd player and have some sort of bizarre interaction with them, or some stilted, nonsensical world event would pop up and you’d paste a few mutants for an instructional pamphlet on nailing two boards together to make a robot barn or something. But my most enjoyable moments were largely encountered in just ambling around on my lonesome and building onto my ramshackle, automated merchant stall in the middle of nowhere. Yes, you can largely get these moments from (insert modern Bethesda title here), but the absurdity of getting so much mileage out of hanging out with myself in what was billed as the multiplayer experience of the decade just made it more special to me. I need help.