You are here:
Home / Skyrim’s Dark Brotherhood Questline Has Nothing On Oblivion

Skyrim’s Dark Brotherhood Questline Has Nothing On Oblivion

Skyrim gets some things right with its Dark Brotherhood questline. It honors the structure of the organization and amplifies the invisible selfishness buried deep within each of its members. Best of all, it captures the concept of the Dark Brotherhood’s slow and steady decline into obscurity perfectly, particularly in its decision to send you back to a derelict, last-resort sanctuary after your own one is destroyed.

All of the above being said, Skyrim still seriously dropped the ball with the Dark Brotherhood. It’s a blunder I’ve never been able to make heads or tails of given how incredible the faction’s questline was in Oblivion. I think the fact you can summon Lucien Lachance as a spectral assassin in Skyrim is more of an admission of its inferiority than it is a nod to Oblivion’s masterclass – a sort of, “Remember how good we were?” moment. Yes, I remember. That’s why I’m annoyed that someone made an absolute balls of this.

This argument obviously acknowledges the caveat that Oblivion is a hilariously broken game in many ways. I’m not talking about that here – I’m judging this on a pure narrative basis. The Dark Brotherhood questline in Oblivion has some of the strongest factional storytelling I’ve ever seen in an RPG. Here’s a quote from the aforementioned Lucien Lachance, former Speaker of the Black Hand:

“Have you not heard of the Dark Brotherhood? Of the remorseless guild of paid assassins and homicidal cutthroats? Join us, and you’ll find the Dark Brotherhood to be all that, and so much more. We are, more than anything, a union of like-minded individuals.” 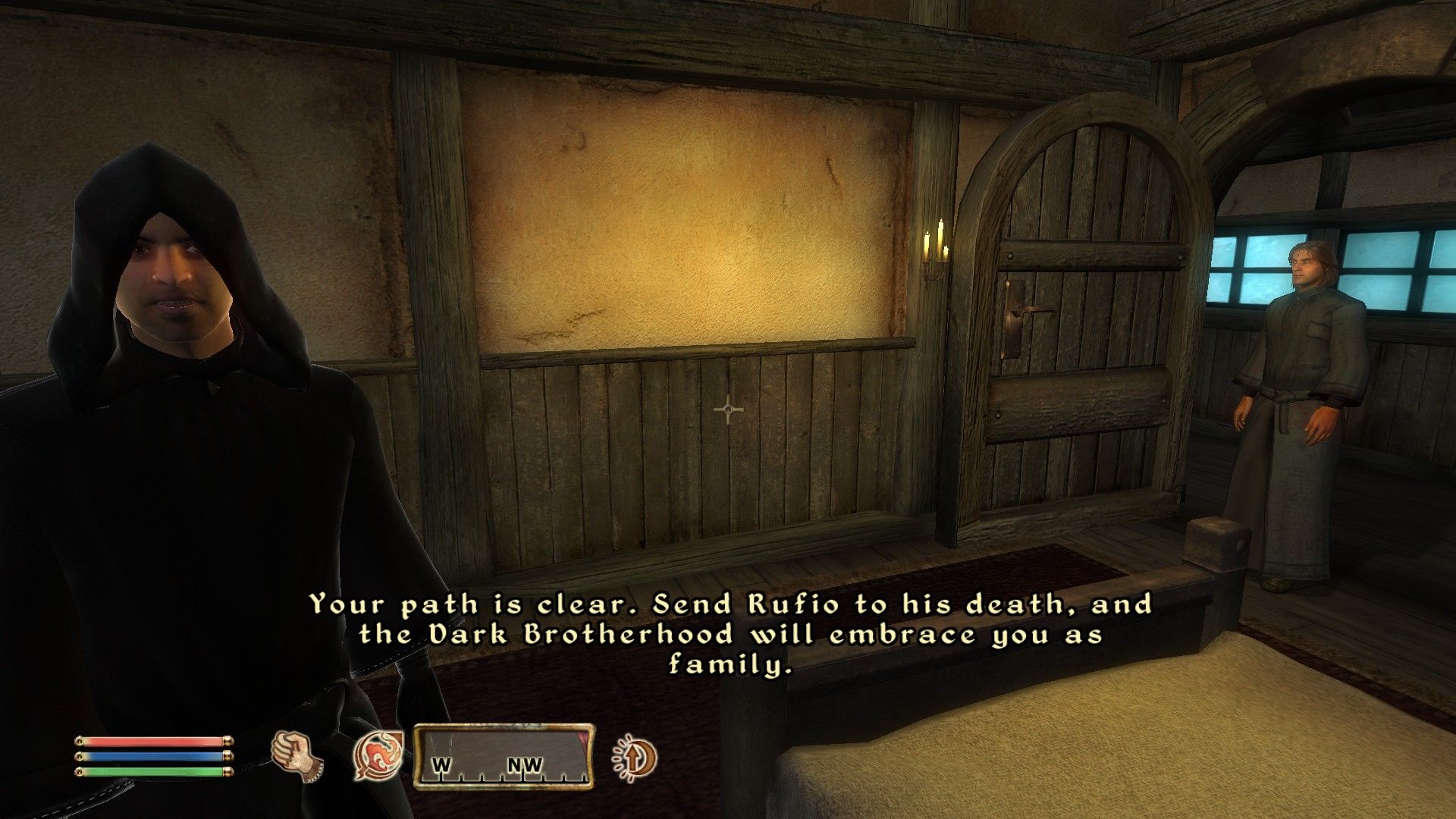 I want to refer back to the selfishness I mentioned at the start of this article and apply it to two separate quests: Death Incarnate from Skyrim, and The Purification from Oblivion. Both of these quests involve a culling of the Dark Brotherhood’s ranks, but The Purification is far more cohesive and compelling. It displays a deep understanding of the people it’s telling a story about, while Death Incarnate is a messy, premature wrap-up of a fairly dull questline packed with directionless radiance and forgettable faces.

In Death Incarnate, Astrid betrays the Dark Brotherhood to save it, which makes zero sense. As stated by Lachance, this is an organization of “like-minded individuals,” which, to me, is as fundamental to the Dark Brotherhood’s identity as assassins. This isn’t a club you can just join. It’s an ancient order with strict rules and an inherent sense of know-how.

That’s why it’s so hard to suspend your disbelief enough to accept Astrid’s betrayal. In Oblivion, the betrayal goes in so many different directions. It occurs in secret, at first, and eventually you inadvertently become a traitor yourself. As the Speaker above you, Lachance is the one who is tracked down and killed for this – despite being completely innocent. Once you prove that Lachance had nothing to do with the killings, Mathieu Bellamont reveals that he has been conspiring against the Brotherhood from within for years, after developing a vendetta against Lachance as a child. 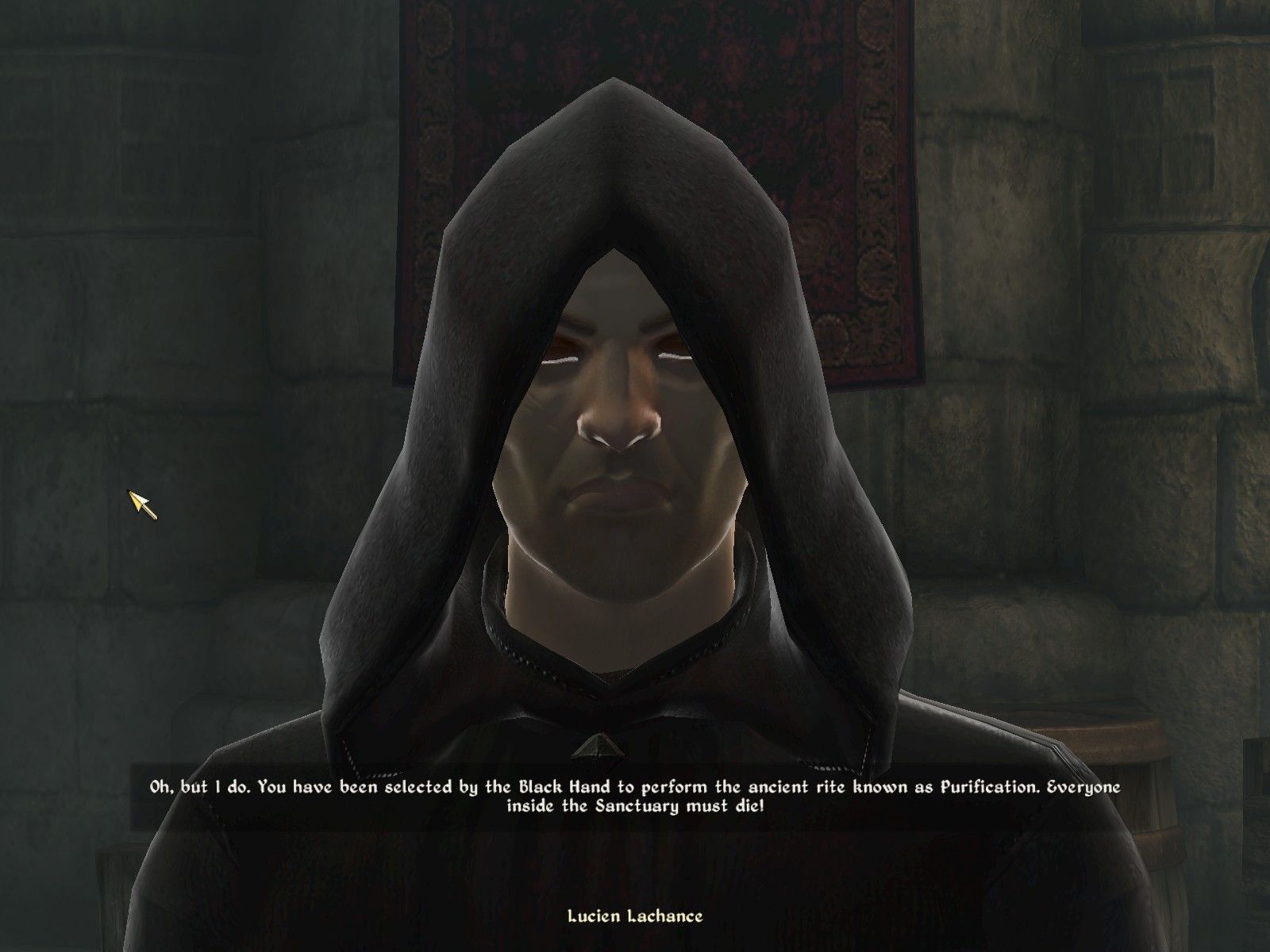 But again, this shows the like-mindedness of these exceptionally strange people. Lachance had you exterminate everyone in the Cheydinhal Sanctuary prior to this, under the impression that someone there had been replacing his dead drops – every target he gave you was swapped out with an incognito member of the Black Hand. But just as he was willing to kill his brethren, Arquen, Bellamont, and a group of other surviving assassins murdered him for suspected treachery. The Dark Brotherhood is a union of like-minded people – for better and for worse. They are tight-knit – it’s reasonable to say they’re even family – and yet they all have their own individual ideas that link them to each other not because of harmony, but because of the knowledge that they are not the only one with an agenda. It’s a case of community created by mutual disparity, and The Purification – and the quests that follow that – understand that dynamic perfectly.

Skyrim had none of that. Astrid performing the Black Sacrament on herself after betraying you to the Penitus Oculatus feels like a kneejerk twist designed to bring a spike to a pretty flat story. And, just like the material before it, it falls pretty flat. The only good things about the Dark Brotherhood in Skyrim are Cicero and Babette’s spider. The rest of it is just a poor-quality facsimile of the Oblivion script with fanfic amendments made in crayon throughout. I know that sounds harsh, but I’m talking about these two stories relative to one another – if Oblivion’s Dark Brotherhood is The Lord of the Rings, Skyrim’s is that weird Gollum game that’s in development.

The rest of Skyrim is pretty good. I actually like its Thieves’ Guild questline more than the one in Oblivion – aside from the bit at the end where you get to break into the Imperial Palace and steal a literal Elder Scroll, obviously. But Skyrim’s take on the Dark Brotherhood is a tale of missed opportunities and unrealized potential. Oblivion’s Dark Brotherhood is what made me want to play Skyrim in the first place. To see such a decline in quality was disappointing in 2011 – and it’s still just as disappointing today. Also, I didn’t even need to mention Whodunit?, which is arguably the best quest in any Elder Scrolls game to date.

Next: Dragon’s Dogma Is A Much Better Dragon Game Than Skyrim Will Ever Be 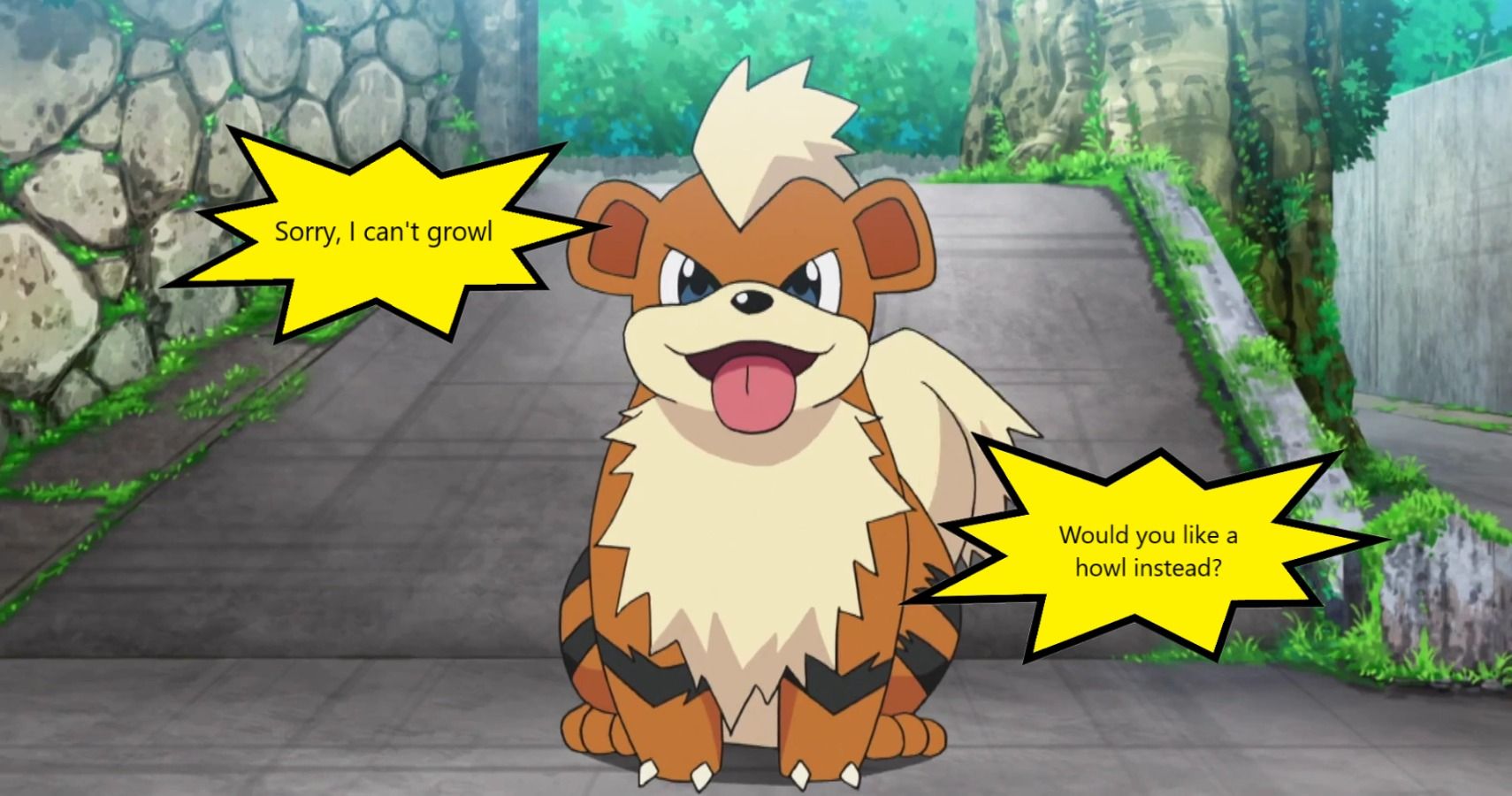