You are here:
Home / Retro Machina Review: I’ve Seen This Future Before

Retro Machina is an isometric puzzle-platformer where you guide an adorable little robot – who’s a dead ringer for Clank from Ratchet & Clank – across the ruins of futuristic sci-fi cities to find something that can repair its haywire mechanical brain. That premise may not sound very original, and to be honest, there’s not a lot that is original about this title.  It’s competently made, but it all feels inessential because there’s nothing here that hasn’t been done before by better and more intriguing indie games.

The story involves the little robot hero that you control working on an assembly line until it notices a butterfly that’s flown in through a window. Admiring this bug is apparently an indication that the bot’s brain has been corrupted and its machine overlords try to recall and dismantle it. So you run away from the factory and search for a machine that can fix whatever is wrong with your circuitry. This leads you to travel across the dystopian remains of the futuristic society that built your model of robot along with various other automatons inspired by science fiction from the 1950s. Eventually, you’ll discover what happened to the noticeably absent human race and figure out the cause of your sudden dose of free will. 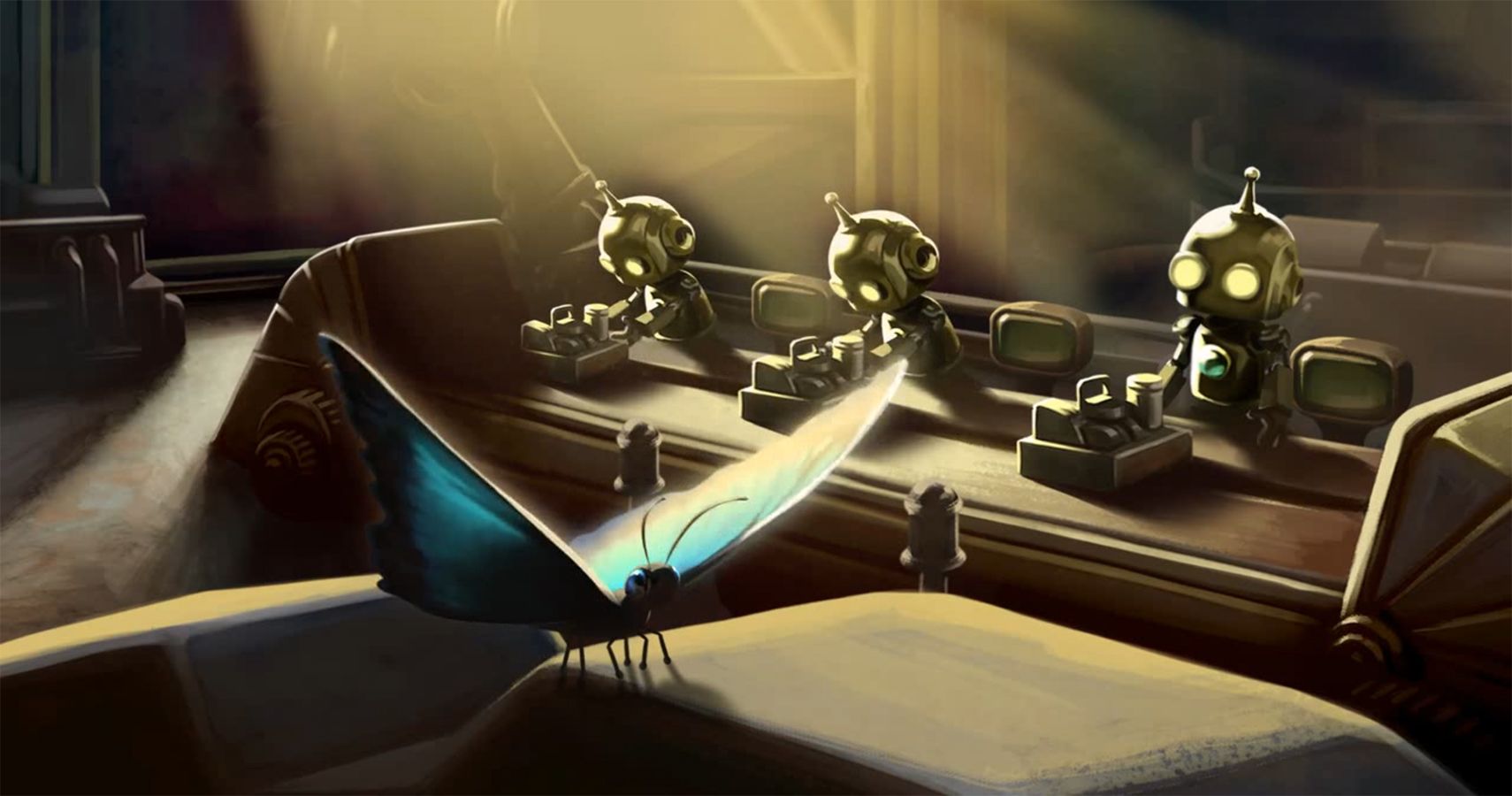 The narrative is told through short static scenes that pop up when you find things that your cold robot brain can’t comprehend such as an old romantic movie playing on a projector. There are also your standard journals and recordings that fill in the gaps of what happened in the past. At times the plot piqued my curiosity as I wanted to know more about the backstory of this world. However, if you’ve ever read or watched any sci-fi tales about robots gaining sentience, it’s fairly easy to predict Retro Machina’s story beats. It’s serviceable, but nothing special.

The hand-drawn art style is where Retro Machina stands out a little from the rest of the indie crowd. It’s all inspired by art deco designs, classic science fiction, and games from the 16-bit era. I was reminded of the Fallout and Bioshock franchises by the way certain robots and buildings looked. There are also some parts that seemed to be references to old-school sci-fi films like Metropolis. If I’m going to remember anything about this game, it’s definitely going to be the visuals.

The gameplay is solid, isometric puzzle-platformer fare in the same vein as something like Bastion. Your weapon of choice is a wrench that you use to bash enemies. There are crafting machines around that you can use to make upgrades and gain new skills by finding hidden items scattered around the maps. There will be paths closed off that require you to find colored keycards to open. Opening up these paths eventually leads you to one of four keys that open a locked door that leads to a boss. Once you beat that boss, you’re off to the next level until you reach the end of the game.

The puzzle aspect of this puzzle-platformer comes from your ability to hack into your fellow robots and control them. Some robots will help you get through rooms with their special abilities such as tiny robots that can enter small tunnels and air ducts, or a frog-shaped robot that can enter the water and move platforms. You can also possess enemy robots and use their abilities in combat. This allowed for some silly moments where I would hack into a barbeque-bot that uses a samurai sword or a former jukebox-bot that now flings saw blades. It definitely improved the battles as it gave me more to do than swing my wrench and dodge roll. 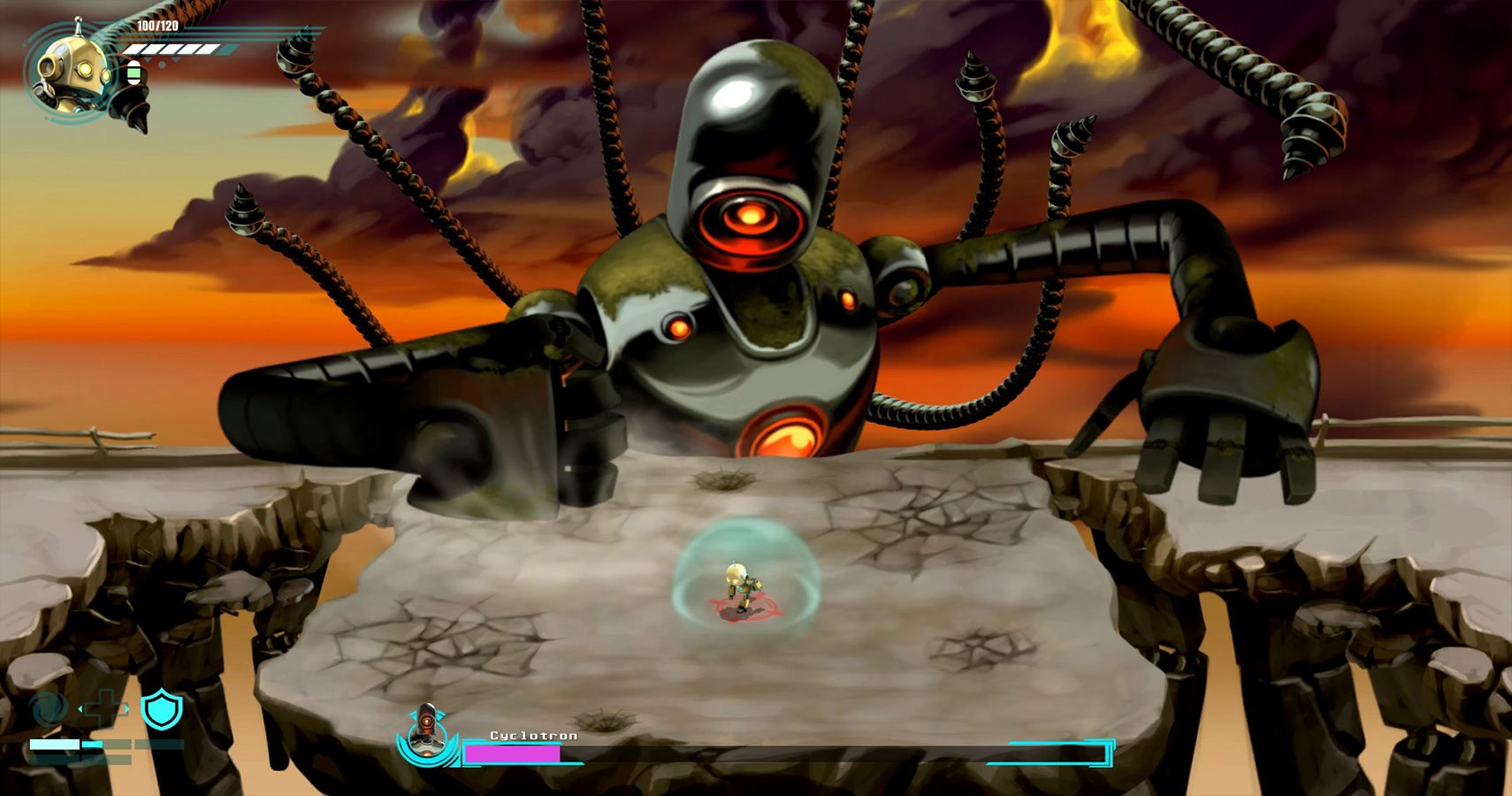 I didn’t really have any issues with the way Retro Machina played. It controls well, the combat feels pretty good, and I was never frustrated by any unfair mechanics during the puzzles or boss fights. Much like the story, it’s all serviceable and works as intended. But the whole time I played through it there was a feeling of deja vu. It has the 50s-inspired post-apocalyptic world of Fallout, the combat of Bastion, and your Clank-like robot has the Clank-like ability to take over the minds of other robots. Add in the fact that most of the game revolves around the stale gameplay cliche of finding different colored keys for different colored doors and you have a title that feels tired and unimaginative.

It doesn’t help that you have to do an awful lot of backtracking. Each level has sections blocked off by gates or locked doors. As you progress you’ll find ways around those gates or the keys that open those doors. Then you’ll have to head back through the level to those unlocked areas in order to find more keys and unlock more areas. It’s standard gameplay for this genre, but there wasn’t anything fresh about it. It almost felt like the kind of progression you’d find in a Metroidvania only without you gaining any new items or abilities (aside from a jet propulsion upgrade you find in the first zone.) Again, there wasn’t anything particularly wrong about this part of the game, but it just felt boring to wander back through areas to fight more of the same robots. 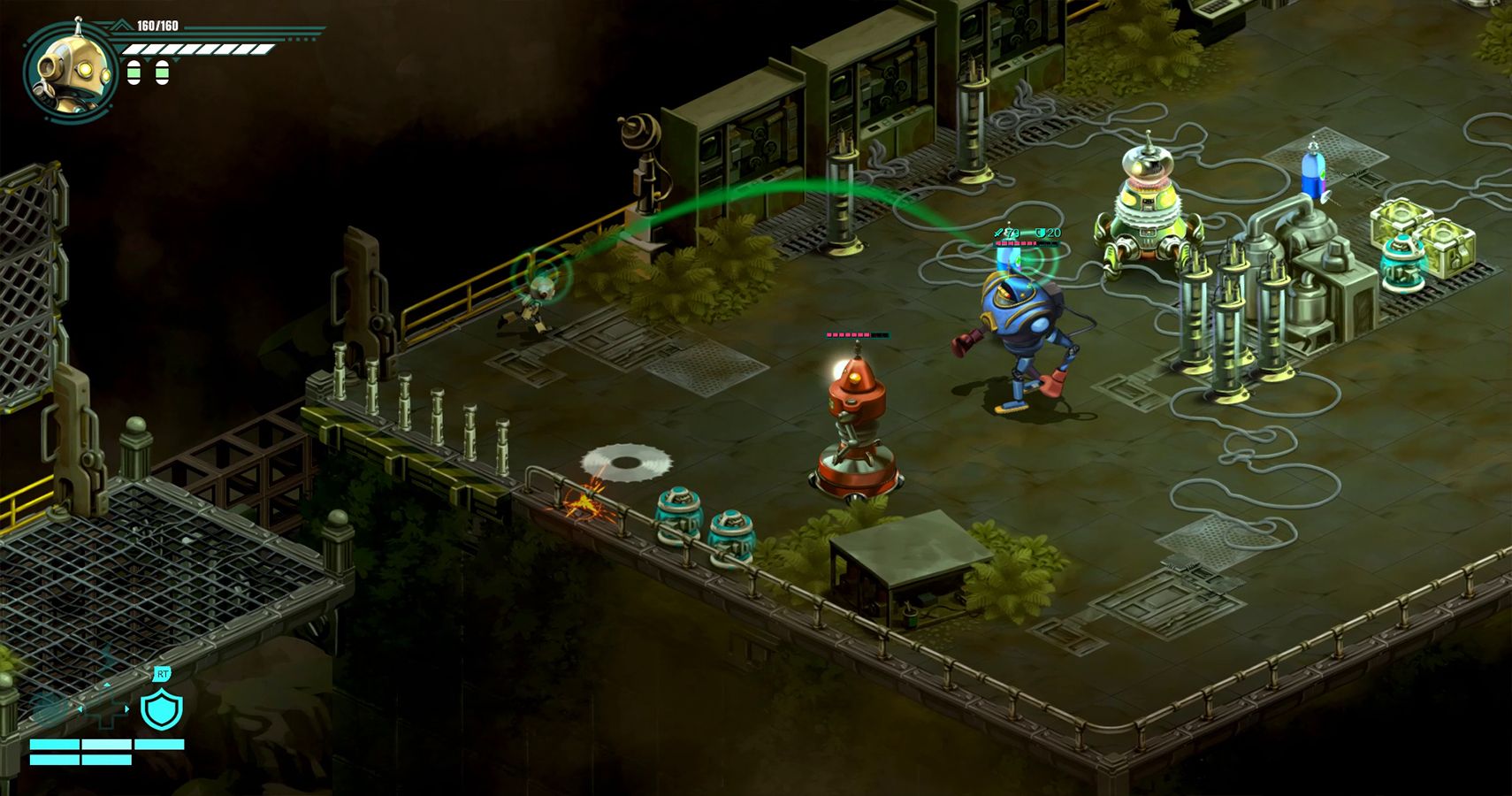 Retro Machina is…Fine. It’s fine. It’s not all that exciting or engaging, but it’s also not buggy, broken, or poorly designed. It has a few good narrative moments, the art style is fantastic, and there are some decent boss fights. But at the end of the day, it’s just another puzzle-platformer that I feel like I’ve played before. It almost seems like the greatest hits of the last decade of indie games condensed into one title, although it’s not quite as good as that might sound.

If you happen to be craving a new isometric puzzle-platformer then this could make for an alright distraction, but you have many other better options out there. Retro Machina is a game that takes too much inspiration from the past, which may sadly lead to it being forgotten in the future.

A PC copy of Retro Machina was provided to TheGamer for this review. Retro Machina is available on PC, PS4, Xbox One, and Nintendo Switch.