It’s been a busy year for board games, and none more-so than for Catan. The 1st edition of the popular franchise was the brainchild of Klaus Teuber and released in 1995 in his native Germany. It has since become a worldwide phenomenon with over 40 language variants that sold over 35 million copies. Renamed to Catan from the former Settlers of Catan, the original has received several spin-off editions and expansions that can integrate together, resulting in enjoyable and challenging games. In addition, they have released several standalone games with a focus on historical and themed franchises such as Game of Thrones and Star Trek. It is also respected by game designers and is cited as sparking the Eurogame genre and renaissance of board games that have taken the US by storm.

Catan Starfarers was refreshed last year (2019), 20 years on from its original release. The futuristic setting moves the Isle of Catan into a distant area of space that has been populated by several Catanian settlements. The refresh updates the in-game artwork and gives it a more modern feel, and they have revised the rulebook to streamline and clarify the original intent. The premise is simple; each player manages one of the four Catanian settlements and must navigate their region of space carefully and colonize their neighboring planets, all while maintaining good relations with the aliens who live close by. There are four alien species (Green Folk, Scientists, Diplomats, and Merchants) that players interact with.

Players have a large mother ship playing piece that represents the fleet’s capabilities. The fleet’s abilities can be upgraded with additional weapons, speed boosters, and extra freight storage. The mother ship is also the player’s dice. It contains several balls of different colors that determine what a player can do. The mother ship is turned upside down, shaken, and returned upright. allowing two balls to drop into the bottom of the ship. 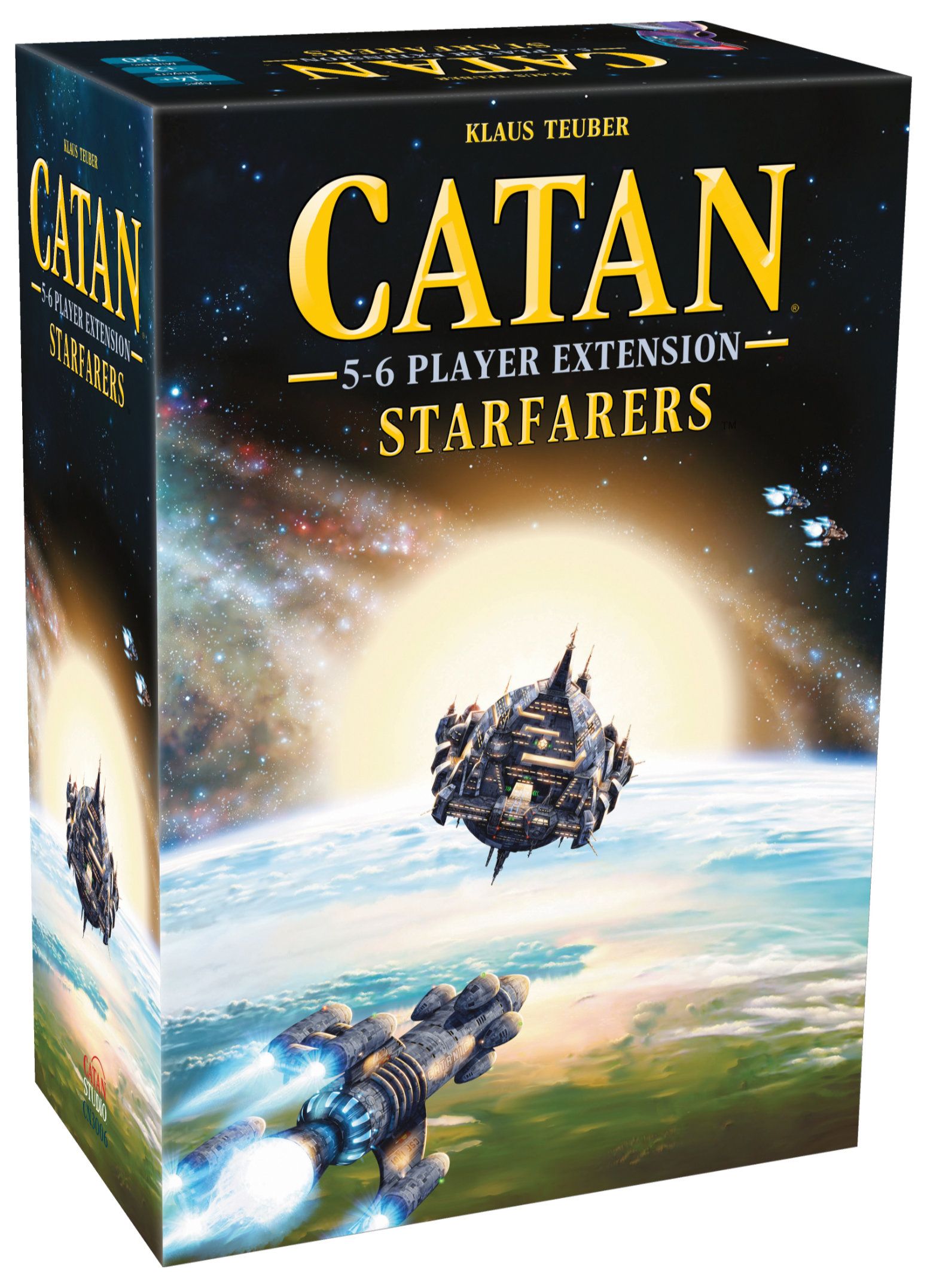 Players take it in turn to play, with each turn comprising three main phases, production, trading, and building, followed by a further flight phase. During the building phase, players may choose to build or upgrade their spaceports and ships. The flight phase allows players to move about the playing field and explore unchartered territories; just watch out for pirates. Should a player roll a black ball, they trigger an encounter that may help or hinder them. Each player controls transport ships that can be combined with a colony to create a colony ship or trading post to form a trading ship. Ships are moved around the board based on the mother ship roll to establish additional colonies and trading posts. A handy tracker is built into the board to record victory points, and your mother ship serves as a single reference for the capabilities of your fleet.

Compared to its lightweight cousin, Catan Starfarers requires considerably more set-up. There are plenty of tokens and playing pieces to factor in and during each turn there are plenty more things to think about. Starfarers breaks away from using tiles and features a fixed board. Despite this, however, it follows the same tried and tested formula as the original. Once a few games are played, any feeling of trepidation is quickly washed away. Victory is achieved by the first player to hit 15 victory points.

The release of the 5-6 Player Extension is a welcome addition to the Starfarers universe. Not only does it extend the game for an additional two players, but there is also a new player turn mechanic. For certain actions that a player takes during their turn, other players may make an equivalent move. For example, if player 1 builds something, player 2 can respond in kind. This not only speeds up play, but it increases player interaction and results in a better experience for all. There are plenty of new game pieces and tokens to accommodate the new players, and there is also a new board extension. The keen-eyed among you may recognize that this is a refresh of the original 5-6 players extension released back in 2001. If so, you aren’t the only ones!

“Since the release of the revised, reimagined Starfarers last year, we’ve had many requests from fans to release the 5-6 Player Extension, and we’re pleased to do that now,” said Pete Fenlon, CEO of CATAN Studio. “We’re excited to see the stories that will unfold on the table as more players are introduced to the Starfarers universe.”

The new Catan Starfarers 5-6 Player Extension brings the full Starfarers universe of old well and truly up to date with last year’s refresh. The improved, matching artwork and streamlined rules are accompanied by improved playing pieces that align perfectly. The new game mode brings a refreshing twist that means less downtime for players and greater interaction. It will be interesting to see what Klaus Teuber has in store for the future of the Starfarers universe. With tabletop gaming at its most popular for years and players demanding more, Catan Starfarers is well-positioned to tap into the zeitgeist with new content. For one, we would like to see improved combat rules and the ability to conquer the galaxy. Or is that a little too aggressive for Catan? 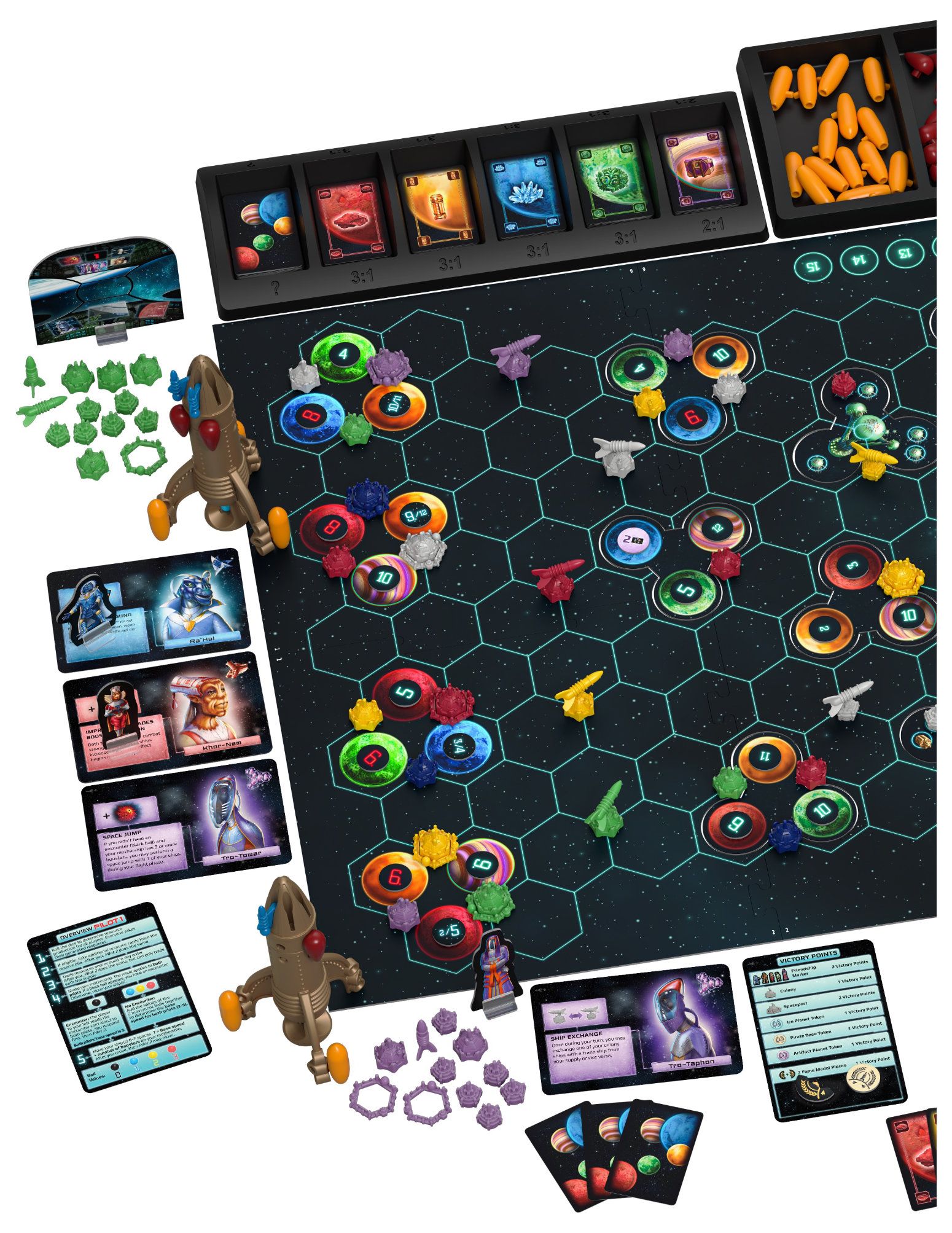 Catan Starfarers 5-6 Player Extension is available to pre-order now at $49.95 direct at the Catan shop and from select retailers.

NEXT: Dive Into The Dark Side Of Warhammer 40k With Humble RPG Book Bundle

RELATED NEWS
If Johto Or Sinnoh Return, They Better Bring The Pokeathlon With Them
ITTA Physical Edition Review: Show ‘Em Who’s Boss
Interview: Voice Actor Erica Lindbeck On Bringing Persona 5’s Futaba and FFVIIR’s Jessie To Life, Twitch Streaming, & More
Nintendo Fired Pelly And Phyllis In Animal Crossing (And I’m Still Mad About It)
Recent Posts
This website uses cookies to improve your user experience and to provide you with advertisements that are relevant to your interests. By continuing to browse the site you are agreeing to our use of cookies.Ok