You are here:
Home / Paper Mario: The Origami King is a cute game with ridiculously punishing combat

Paper Mario: The Origami King is a cute game with ridiculously punishing combat

Playing Mario games was a lot different when I was young.

I would play as much as I was able, and then hand the controller to someone else — a sibling, a cousin, a friend, or a parent — and say, “Can you get me through this part? I can’t do it!” That someone would help me through so I could happily run off to play the next section … until I got stuck again and had to ask for more help.

This was decades ago, though. I’ve become the older sibling, friend, or relative to many folks in the time since. Sure, hand me the controller. I can beat that part for you.

Paper Mario: The Origami King makes me feel like that kid again, and it’s absurd. I bump into those moments of frustration daily as I play. Feeling so stymied is especially jarring when contrasted with the whimsy of the rest of the experience. It’s a delightful children’s game for children except when it’s making you do multivariate calculus.

Paper Mario: The Origami King really is, for the most part, a delightful and silly game. Mario heads to Peach’s castle to attend the Origami Festival, which is obviously on brand for a paper-based game. The conflict arrives in the form of the self-appointed origami king himself, King Olly. He starts folding Princess Peach, Toads, and minions alike into origami versions of themselves, which is an unnatural state for the two-dimensional denizens of the Mushroom Kingdom.

It’s up to Mario and the friends he finds along the way to navigate environmental and platforming puzzles, turn-based combat, and paper puns while they set their world right.

Like past games in the Paper Mario series, The Origami King shines the brightest due to the conceit that everything is made of paper, an idea that Nintendo loves to take to its natural conclusion whenever the opportunity presents itself.

Everything on the screen is some playful combination of stickers, papercraft, and papier-mache. I can almost smell the construction paper with its familiar texture and torn edges. I can see the creases and imagine the safety scissors that cut out the shapes.

But then I bump into one of those origami Folded Soldiers, and I have one of my moments of wanting to hand the controller to someone more competent. Combat, at first blush, seems like an RPG: You encounter a representation of an enemy in the world, and then you transition into a battle arena where you face several of that enemy in turn-based combat.

Origami King adds a twist here, however. Combat takes place in a circular arena with Mario in the center. My enemies are arranged around me on a series of four rings divided into twelve sections. I can rotate these rings or slide the sections to arrange my enemies into a pattern before each turn — rows for jumping attacks or two-by-two squares for hammer attacks. Combat is basically a puzzle mini-game as much as a battle of tactics. If I get it right, I can win every fight in one turn without taking any damage.

Combat is more puzzle than tactics.
Intelligent Systems/Nintendo via Polygon

It’s a mechanic that takes a little getting used to, because I only have a few moves and a time limit in which to make them. There are so many of those easy puzzle-combat scenes early in the game that they start to feel overly simple and unnecessarily time-consuming, and I get both bored and overconfident.

Then another encounter, this one slightly later in the game, leaves me staring at the screen absolutely certain the puzzle is impossible. My time runs out or I run out of moves on the rings, and I’m left with an imperfect solution and an overwhelming sense of defeat because this seemingly simple kids’ game just crushed any confidence I had previously built up.

The game does offer me some assistance for my moments of confusion. As I explore the world, I’m rescuing hapless Toads who have been origami’d or have gotten their heads stuck in something. During combat, these Toads appear in stands around the battle arena and I can pay them gold coins to help me solve the puzzle. It helps, but being rescued by Toads feels … unpleasantly humbling.

There are other concessions to my fallibility as well. I can recover even when I screw up these puzzles, however. Mario survives the turn-based attacks of the minions, and I get another chance at a simplified version of the puzzle if I’m able to take out a few of the enemies, but not all of them. I don’t think any of these minion battles have taken me more than three rounds to complete, but each of those rounds stretch out into minutes-long combat sequences that drag down the pacing of the game.

And then I encounter my first boss battle.

Boss battles change the rules of combat yet again. The rings remain, but the boss stands in the center and Mario is on the outside. Those ring segments now have a variety of arrows, items, and actions shown on their top. My task — still with a time limit and a set number of ring moves — is to find a path along those arrows, to a spot close to the boss, that ends on a segment with an attack action.

It’s an overwhelming challenge, but not impossible, and I even improve a little beyond “muddling through” by the end of my first boss fight.

Boss fights are confusing and frustrating in an entirely new way.
Intelligent Systems/Nintendo via Polygon

The second boss fight introduces tiles that change in the time between when I set my path and Mario executes it. It’s a twist, but that’s to be expected. I adapt, and Mario arrives at the boss. I watch him deliver a perfect attack. For zero damage.

This boss, it turns out, is only vulnerable from one of those ring segments and not the other 11. I get hints over subsequent turns about why my attacks didn’t work and where I have to stand, but it still takes me three more rounds to figure it out.

By the time I’m in my third boss battle, I’m controlling the rings, charting paths, picking up items, hitting actions in a specific order, chipping away at the boss’ health bar, and planning for my next turn. Those simple, sliding, twisting puzzles and one-round combat encounters from the early hours of the game have turned into lengthy boss fights that feel like a test I didn’t study for.

These fights easily take between 10 and 20 minutes (and one notable 30-minute fight) for a single attempt — no dying, no restarting, just 30 minutes of struggling to figure out what to do, and then trying a new approach once I have a slightly better idea about what I need to do to continue forward.

This isn’t as much of a difficulty spike as it is a difficulty brick wall. I could bribe the Toads to help me out more, but I have to balance that cost against buying necessary weapons and items. And I hate admitting defeat in the face of puzzles that the game has trained me to think have a simple solution, especially when it means asking Toads for help. The battles become so much harder, and the game itself barely seems to notice or care about the problems this will cause players.

You have to spend your coins to buy better weapons, but they break over time.
Intelligent Systems/Nintendo via Polygon

The game is a delight most of the time, and is often too simple as I spend my time running around, talking to other characters, and giggling at the silly wordplay expected from a Paper Mario release. But the 10% or so of the game made up of combat encounters and boss fights makes me absolutely miserable. I’ve made it about halfway through the entire game at this point, and I dread the next boss fight, both because of the time commitment and the frustration I’m sure to feel, based on everything that’s come before.

I’m sure I’ll muddle through it, confused and frustrated, but still kicking, and get back to the jokes about paper products and pounding crumpled-up Toads flat with my hammer. It’ll be silly and funny again, and I’ll almost forget my frustration. But then another boss battle will make me want to fling my Switch through a window.

Delightful, but at what cost?

Nothing is “just a Mario game” anymore. There are 35 years of history and multiple series spanning everything from the original Super Mario Bros. to the various incarnations of Mario Kart, Mario Tennis, and Super Smash Bros., to list very few.

Mario is a brand, not a genre. The strongest connective tissue between them is made up of the characters and basic story beats, while being designed in ways that make them fun for players of any age. These games can often be as hard, or as easy, as you’d like to make them.

For so much of Paper Mario: The Origami King, that’s true. I want to share it with my nieces and nephews, as well as my grown friends. But I hesitate due to the frustration of the combat and those imposing boss battles — those moments where I wish I had someone else to take over on the controller.

Paper Mario: The Origami King will be released July 17 on Nintendo Switch. The game was reviewed using a download code provided by Nintendo. Vox Media has affiliate partnerships. These do not influence editorial content, though Vox Media may earn commissions for products purchased via affiliate links. You can find additional information about Polygon’s ethics policy here. 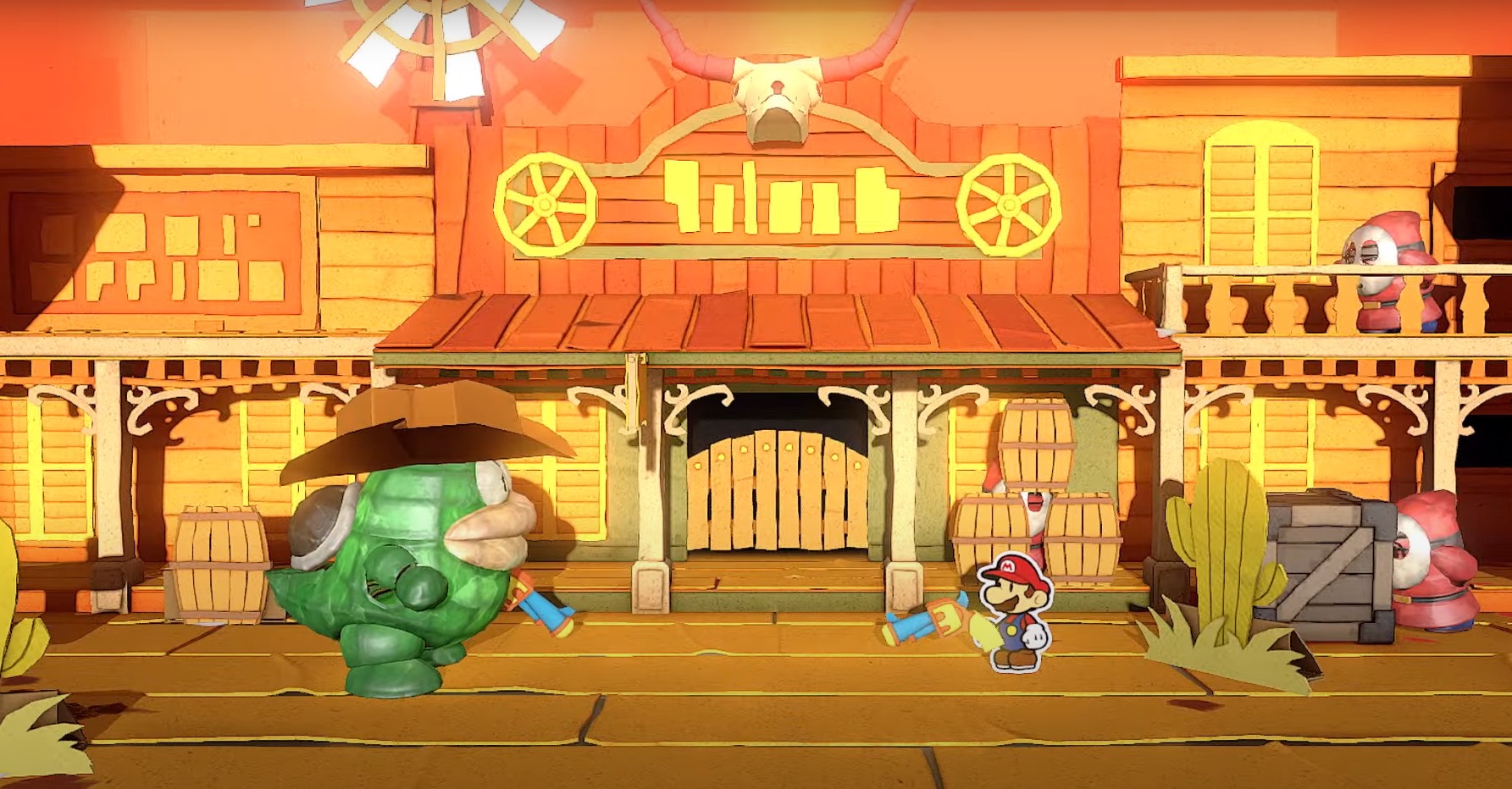 The kingdom has been ravaged by an origami menace! Join Mario and his new partner, Olivia, as they battle evil Folded Soldiers, repair the damaged landscape, and try to free Princess Peach’s castle from the clutches of King Olly in this comedy-filled adventure.

RELATED NEWS
The Callisto Protocol Review – Morsels Of Fun In A Far-Too-Familiar Space – Game Informer
Biomutant PS5 is prettier than ever and a decent action role-play game
Broken Edge Review – Live By The Sword, Die By The Sword
What The Bat? Review: A Home Run
Recent Posts