Just like its PS4 sibling, Spider-Man: Miles Morales starts off swinging. You’re thrust into its gorgeous and sprawling approximation of New York, arms flailing as you give chase to an aerial prison transport. Instantly, you feel like you’re embodying a new character – a different Spider-Man. It controls exactly the same, but the animation work is astounding, selling the fact that Miles Morales, the real Spider-Man’s protégé, is less experienced than his mentor. 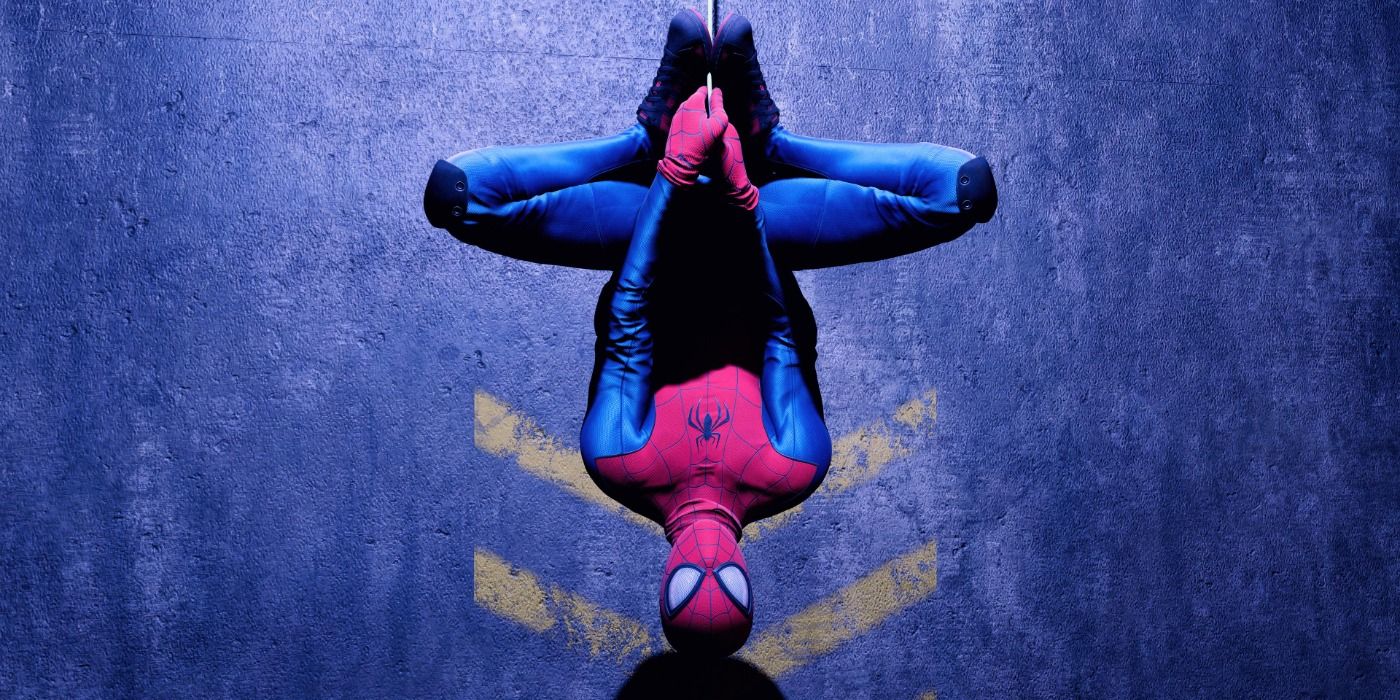 Morales’ swinging isn’t as elegant as Peter Parker’s. He looks like he’s struggling against the momentum as a web catches the corner of a skyscraper and sends him arcing through the sky. Jump at the end of a swing and he hurtles headfirst towards the ground, often backward, which then segues into a reverse swing to the next point, his body twisting with effort against the laws of physics. It somehow feels more thrilling than it did in the last game, and every frame teases you to bring up photo mode to snap a perfect picture. Spider-Man: Miles Morales is a beautiful, fluid game. 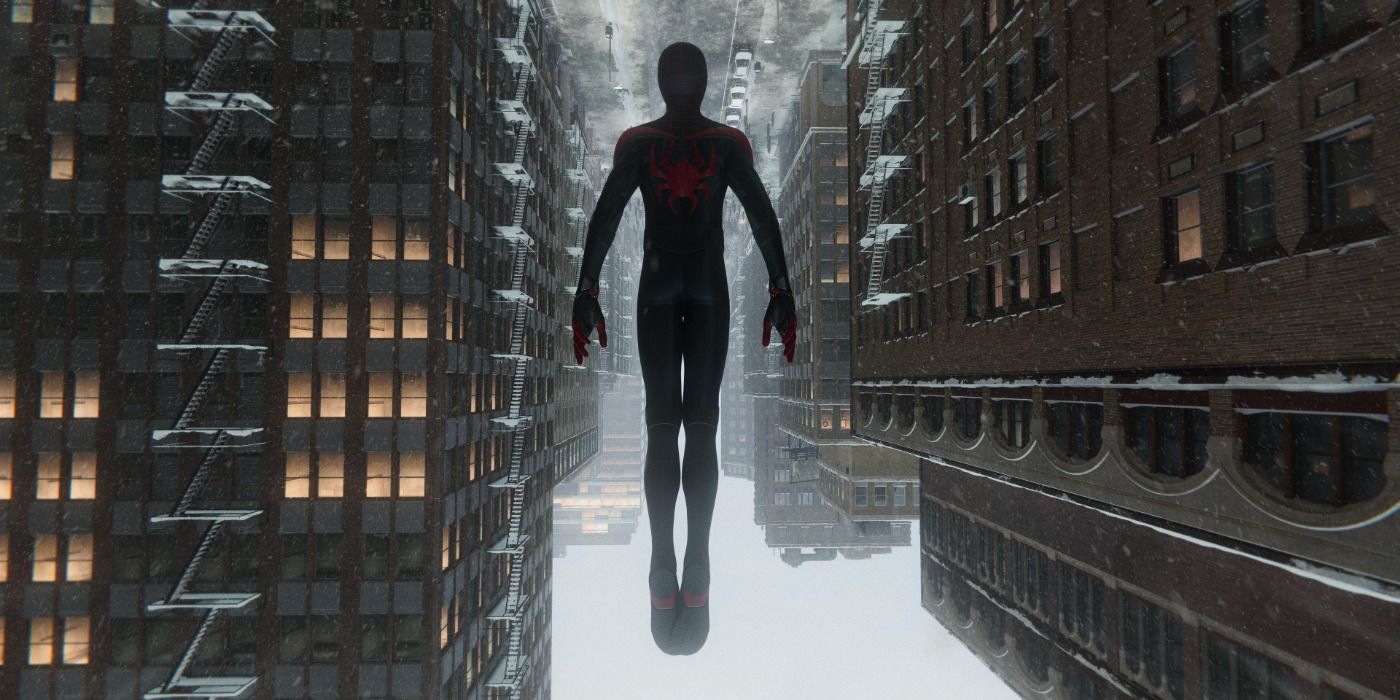 It’s strange booting up the first triple-A game of a new console generation. People are expecting to be blown away like they were with the jump from SD to HD. But here the improvements aren’t quite as readily apparent. They’re mostly in the finer details, due to PS5 games being able to hit a native 4K – the fuzz sticking out of a tear in Miles’ jacket, the bobbles of fabric clinging to his jumper, the glow of neon on a sci-fi rifle, how flakes of snow melt after landing on your suit, and the ray-traced reflections in every pane of glass or polished surface. It also just feels smoother – whether you’re playing in 30fps fidelity mode or 60fps performance mode – thanks to a frame rate that stays locked. Spider-Man is a perfect showcase for PS5.

Outside of Nintendo, I’ve never played anything where the simple act of moving around can carry the entire game. Insomniac nailed what it feels like to web swing across New York in Marvel’s Spider-Man, and Miles Morales improves upon that. I don’t care about collectibles or Trophies, but by the time I’d finished Miles Morales, my completion rate was 99%. You don’t mind going out of your way when you leap, twirl, and spin through the world like a dancer in a hurricane. The PS5’s SSD also adds to that experience, making fast travel actually fast – barely any loading – and letting you zoom from interiors to open-world New York in one seamless transition. 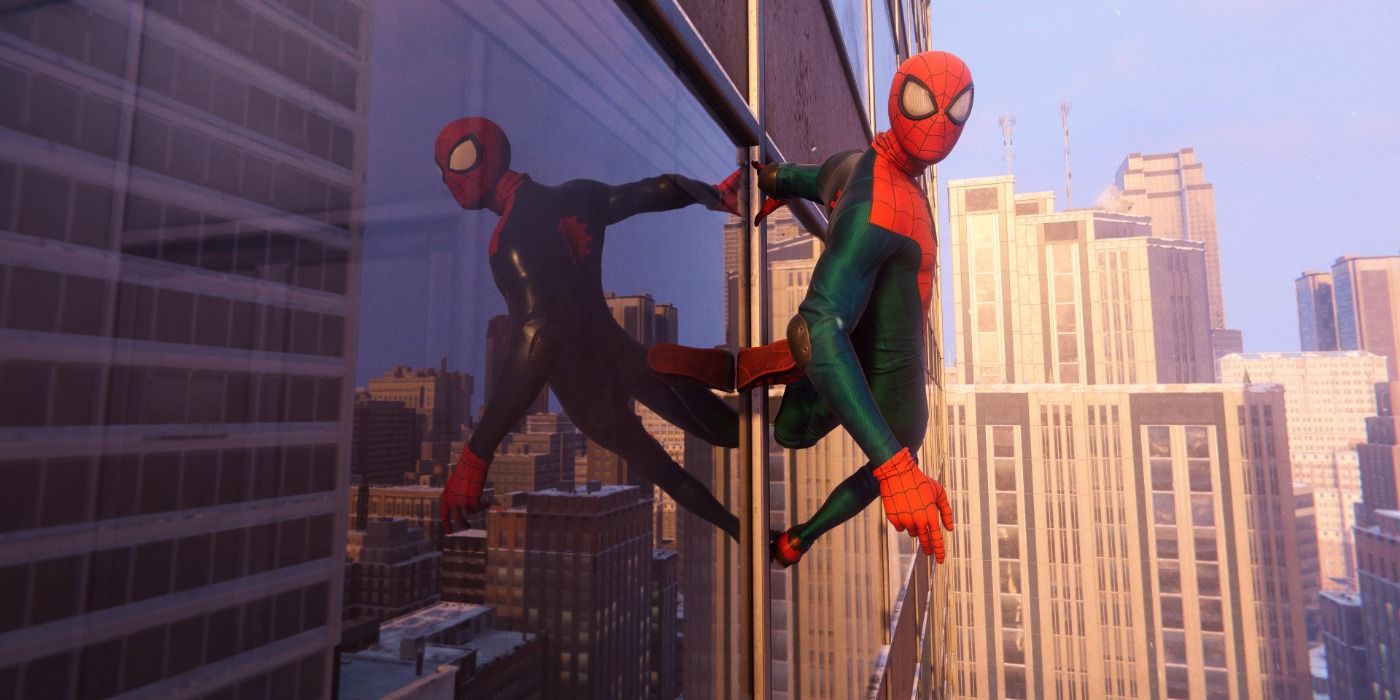 The game begins with you fighting Rhino alongside Parker’s Spider-Man, which is where you learn what sets Morales apart – bioelectricity. He can channel his unique power into his fists to unleash devastating strikes and powerful ground pounds, stunning any enemy caught in the blast of his Venom Punch and opening them up to follow-up attacks. He can also leap into the air with Venom power to pull assailants up and juggle them (or to simply get more air time during traversal). Where Parker was more about leveraging gadgets, here you only have a handful – webs, holograms, gravity grenades, and mines – so you rely much less on webbing people to surfaces and more on punching them directly in the face until they flop to the floor. Later in the story, he learns how to cloak, and you can activate that at any time to get the drop on enemies in stealth or to break away from goons who are pummeling you in a fight. 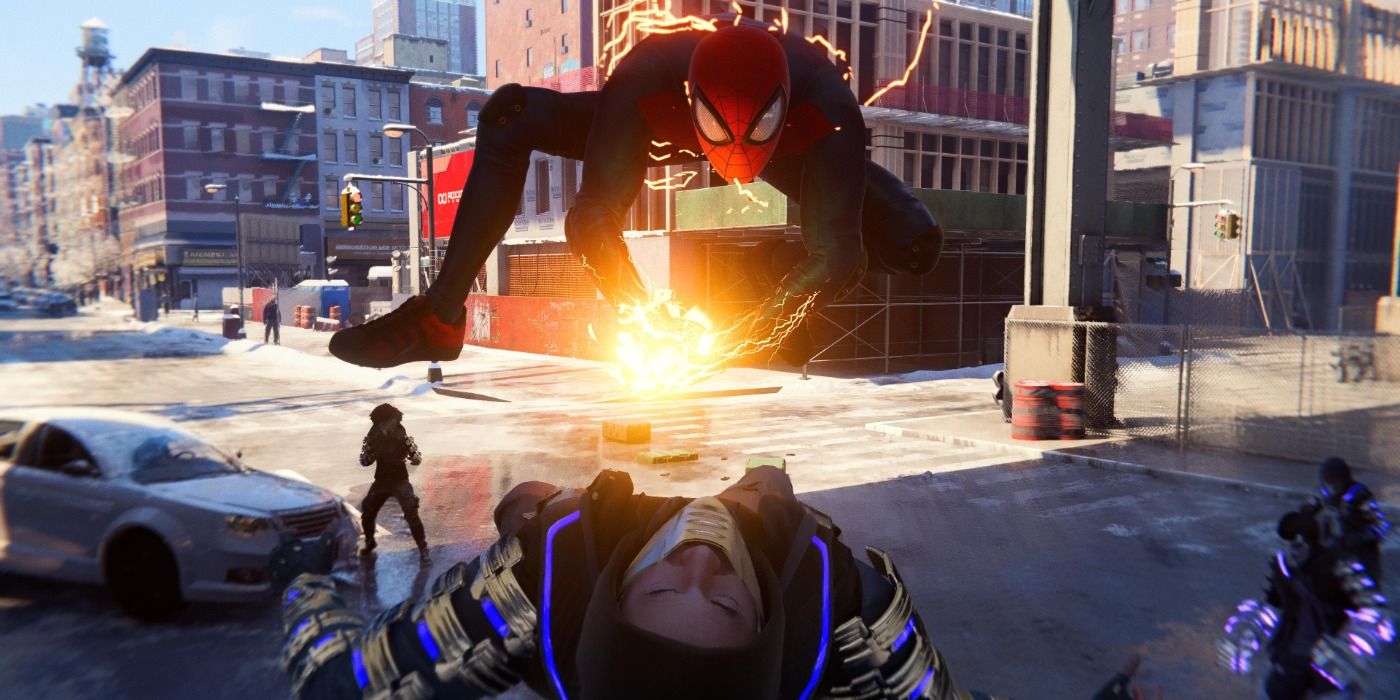 The story leans into those differences, too. This is about Miles finding his feet and becoming Harlem’s hero. Parker is leaving New York for a couple of weeks and Miles is left to be a friendly neighborhood Spider-Man, completing odd jobs via an app created by your compulsory nerdy sidekick. You save cats from criminals, help to put out fires, take selfies with fans, halt robberies, and fix trains, in addition to the various random crimes that pop up as you explore the city. You build Miles’ reputation and prove he’s no second-rate Spider-Man, all while a story of betrayal and friendship unfolds – culminating in a massive endgame showdown with an enemy I won’t spoil. It’s more intimate than Marvel’s Spider-Man, focusing on a handful of villains and telling a more personal story about brilliant characters. There’s nothing particularly surprising about where that story goes, but it’s as polished as the ray-traced surfaces found in every high-tech lab you visit. 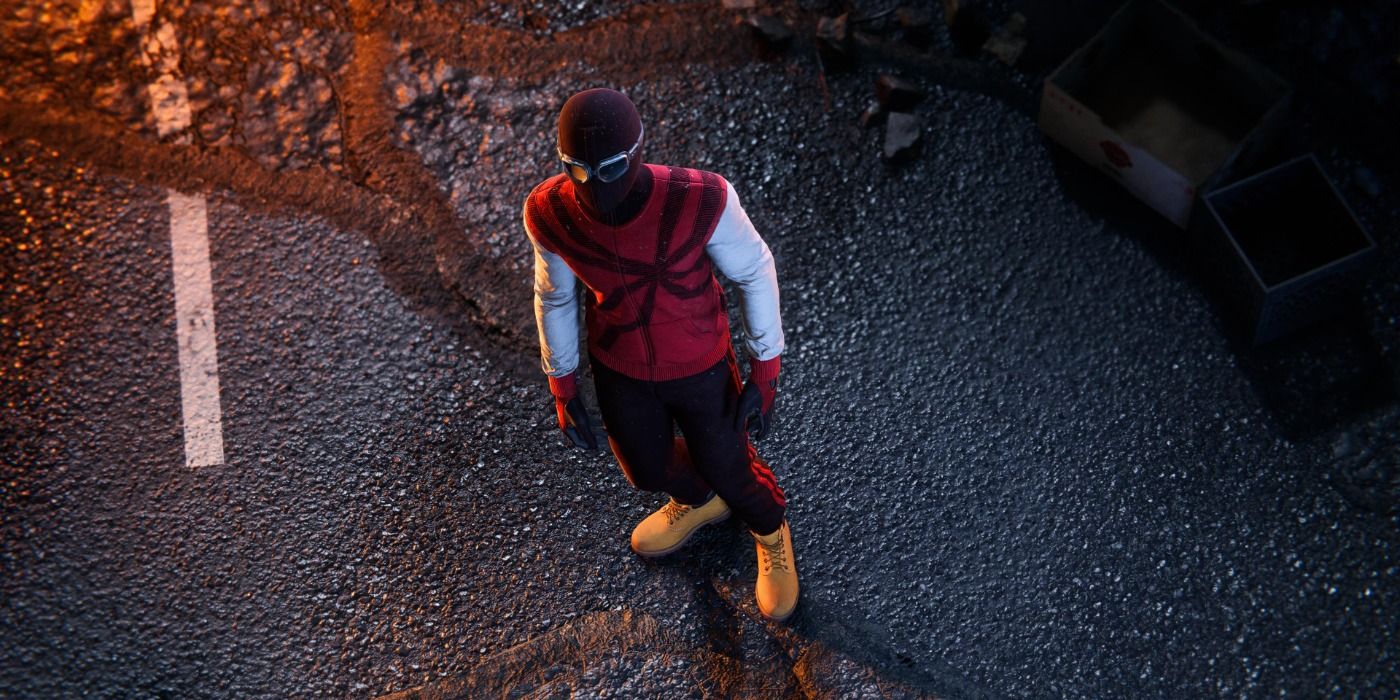 Spider-Man: Miles Morales pops with personality. It’s covered in cool. It oozes optimism. From the occasional bit of licensed music to the characters and its unabashed celebration of Puerto Rican culture, it captivates and compels you, forcing you to engage with its 18 hours like a fly stuck in a web. Yes, you often repeat similar activities, but the core is so buffed, so perfect, that you don’t care. It helps that there are no instant-fail stealth sections in this one. 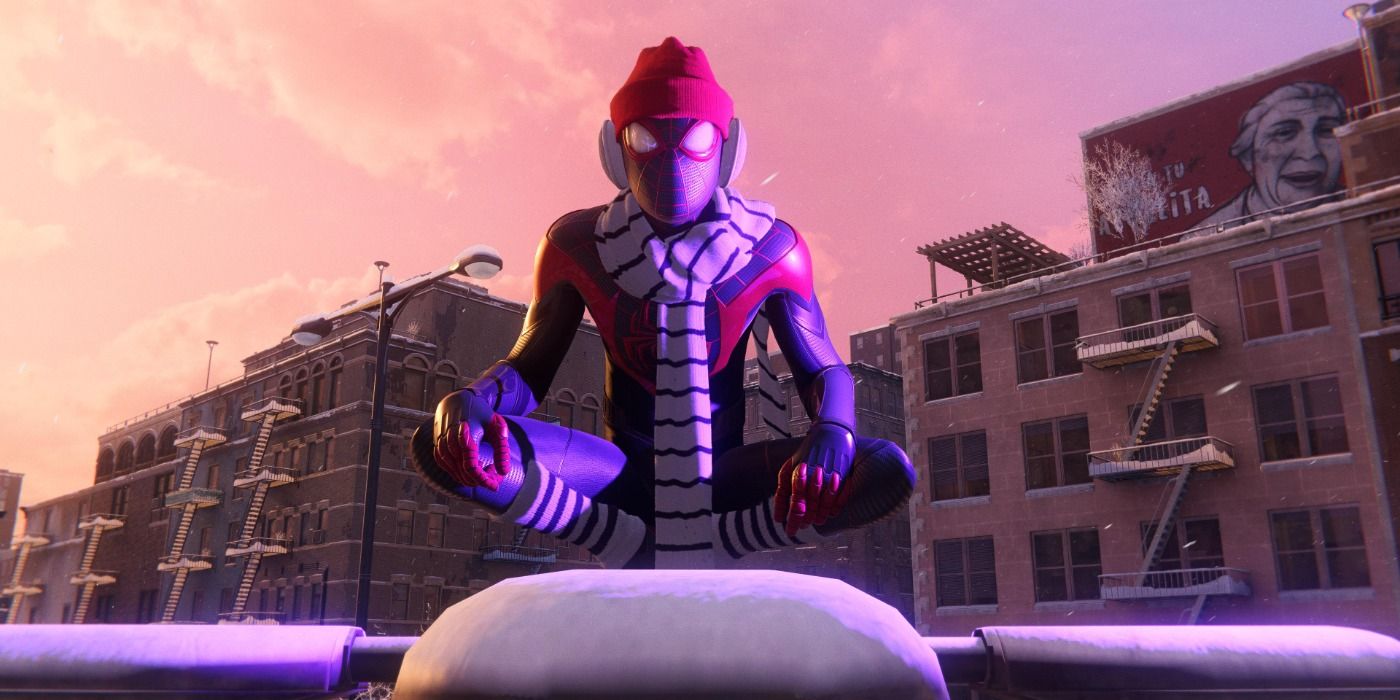 There’s barebones stealth where you are told via the UI when it’s safe to take an enemy down silently, there’re mindless collectibles, and there’s even a boss that you have to lure into walls to stun them so you can whittle their health down with normal attacks. It’s one of those action games, but by god, it’s the best one. There’s something to be said for the importance of innovation in this medium, but you can’t overlook refinement, and Spider-Man: Miles Morales is more refined than the sugar in a New York bagel.

Marvel’s Spider-Man: Miles Morales was reviewed on PS5 – a console and game was provided by Sony.

Next: Marvel’s Spider-Man Remastered Costumes Will Also Be Added To The Original PS4 Game 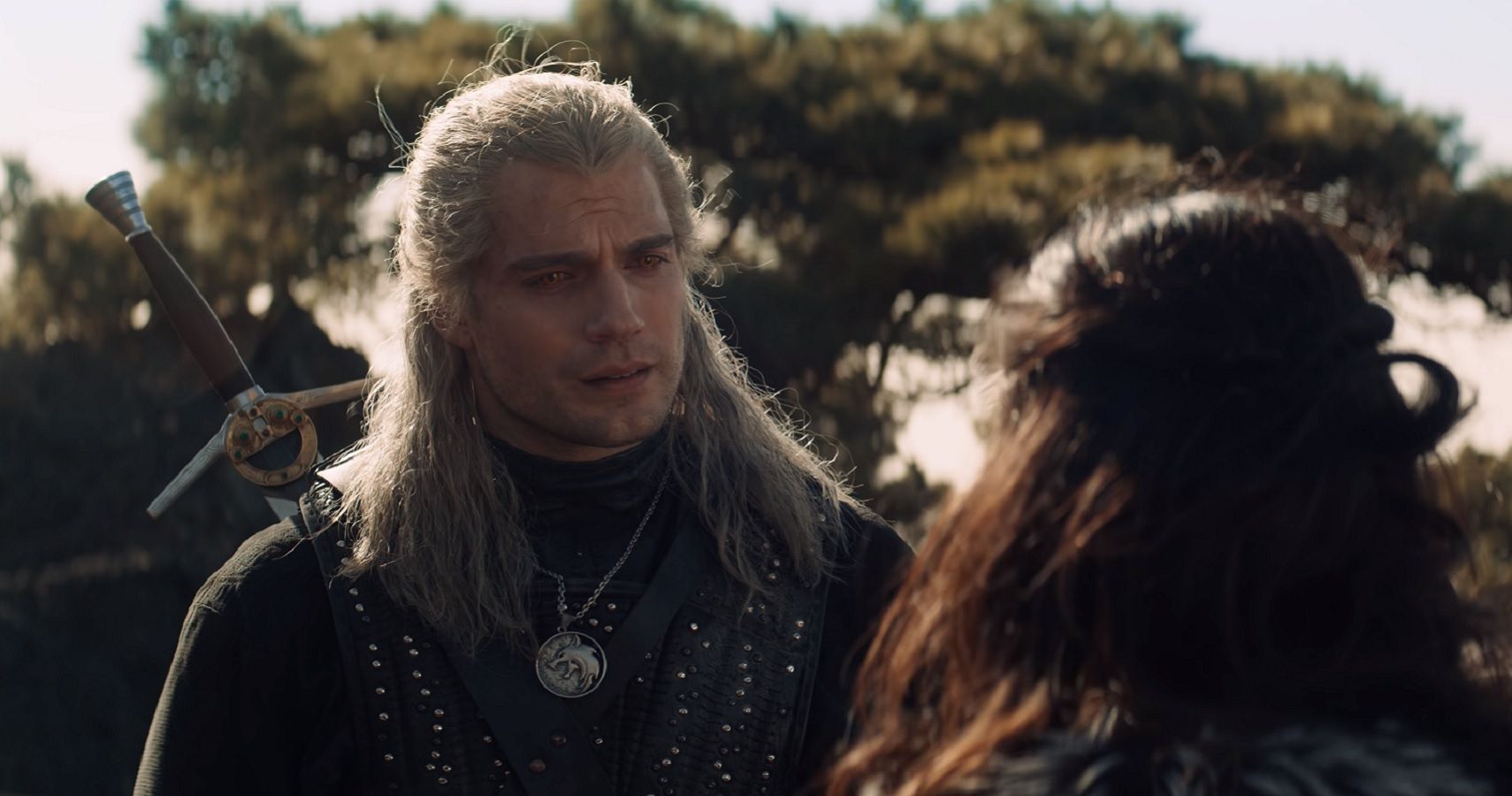