You are here:
Home / Interview: The Senior Director Of Puzzle Bobble VR: Vaction Odyssey On Adapting Bubble Bobble For The VR Space

When you think of franchises that translate well to VR, you tend to picture action or investigation – something that utilises the physicality VR brings to gaming. For Matt Bettelman, senior game designer at Survios, that’s what his career has typically involved. He’s worked on Robert Ludlum’s The Bourne Conspiracy, The Walking Dead and various Transformers games, while also having non-VR experience with blockbusters like Call of Duty. So it’s a bit of a change of pace to see Bettleman and Survios working on the upcoming Puzzle Bobble VR: Vacation Odyssey, a VR take on the classic puzzler Bubble Bobble. According to Bettleman though, there are more similarities than you might think.

“Survios has a lot of experience in making games with external IP holders,” Bettleman says. “So we are very versed in working with stakeholders externally, aligning on their vision and bringing their priorities to the fore. This isn’t new territory for us, we’ve become quite good at it over the last few years. For Puzzle Bobble specifically, working with Taito has been great. They were amazing partners in relying on our expertise to make the game as good as we can possibly make it in VR. But at the same time, they had very clear guidelines for us, and they were very clear from the beginning that they wanted this to be a tropical island field that’s very light hearted and very playful. Our art team did an absolutely amazing job on the visuals for this game. And they worked super closely with Taito, and I think the proof is and how good this game looks.”

Of course, while the idea of adapting an existing franchise is similar, there are huge differences between Puzzle Bobble VR and The Walking Dead, and that’s something Bettleman has relished. “I worked on The Walking Dead for a while, at the start of my time here at Survios,” he says. “I’ve worked on action games throughout my career and having the opportunity to work on something with a bright, colourful, friendly, casual laid back? It’s just a chill experience that that type of environment has been a breath of fresh air for me as a game creator. It couldn’t be more different, right? Working on something where the core mechanics aren’t really diegetic, you’re not worried so much about ‘how does this space work in real life?’ And ‘how does this all make sense?’ – this is really more about just making something that’s going to be intuitive for players and easy to understand and fun. Whether it fits into the confines of something that could plausibly exist in the real world is no longer a concern, which is amazing. You know it’s been really nice in the midst of this pandemic to be able to fire up the game every day. There have been times where I’ve had to stop and put my controllers down and say ‘wow, I’m just gonna relax in this tropical island for a few minutes taking the ocean breeze and hear the birds chirping’. It’s really pleasant.” 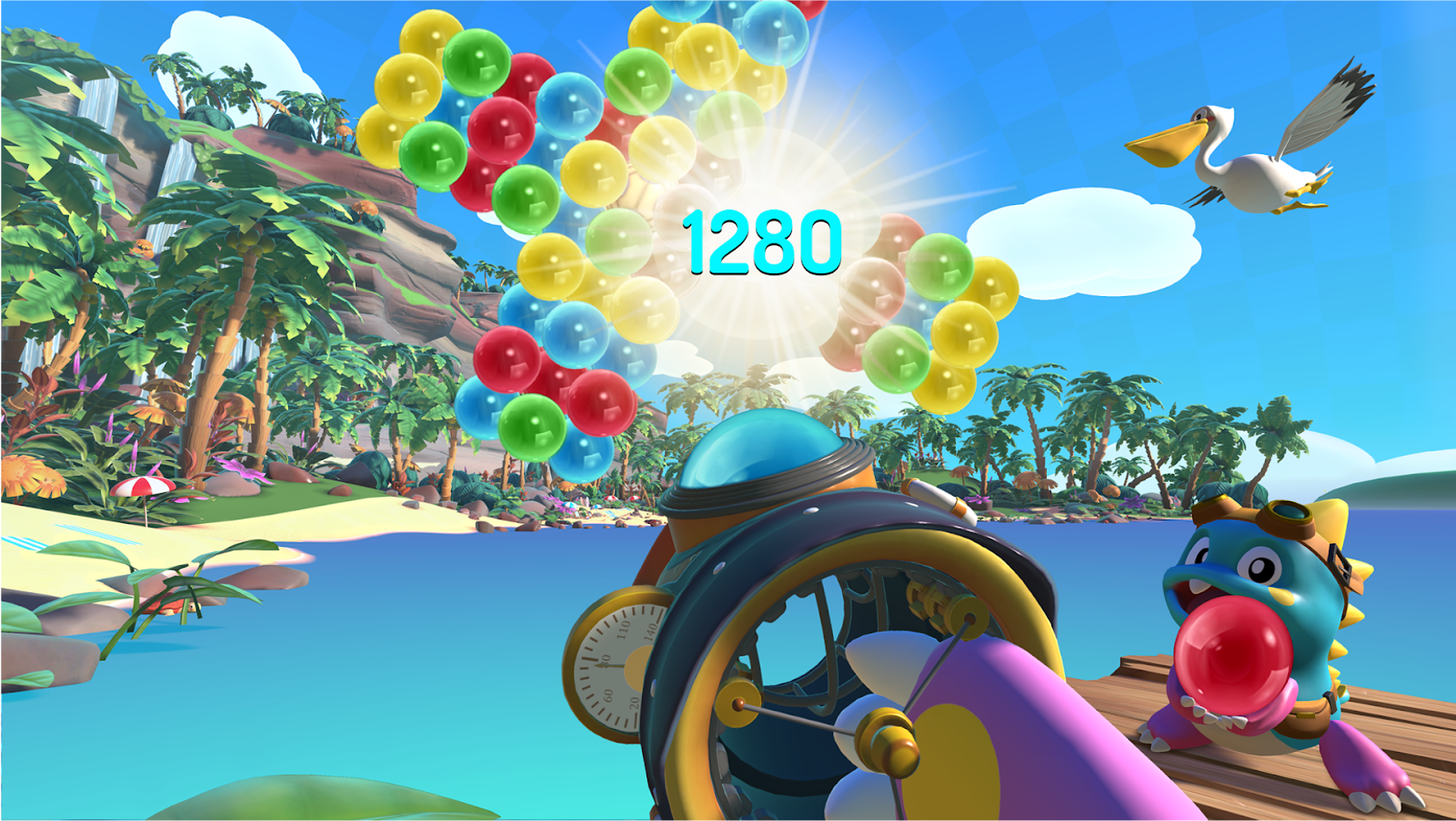 This idea of being a pleasant and engaging experience seems to be at the heart of what Bettleman wants people to get out of Puzzle Bobble too. Since it takes away the usual pitfalls of VR(space to move, motion sickness), Bettleman views it as a potential introduction to the medium – like what Astro’s Playroom is for the PS5 and DualSense.

“We were really focused on trying to make this something that first time VR users would be able to get a handle on and enjoy just from the moment they pick up the controllers,” Bettleman says. “So I think one aspect there is, because this is for the Oculus quest, if you’ve got a wireless headset – we really focused on making as much of the game physicalized as possible. So rather than just a thumb stick or pressing a button to fire your bubble at the puzzle board, it’s a very physical interaction, almost like aiming and firing a slingshot. You’ve got your two hands, and you can aim independently with either hand, then you grab the pull string on the back of the bubble cannon with your primary hand. Depending on how far back you pull, it changes the trajectory of your shot, and it changes the strength of your shot. So it’s all very physicalized. In a way, it sounds more complicated, but it’s a lot more intuitive. Because people just inherently understand how slingshots work, everyone’s use one before everyone’s seen one before. So for someone who maybe doesn’t traditionally play video games, I think this is gonna end up being a lot more intuitive.” 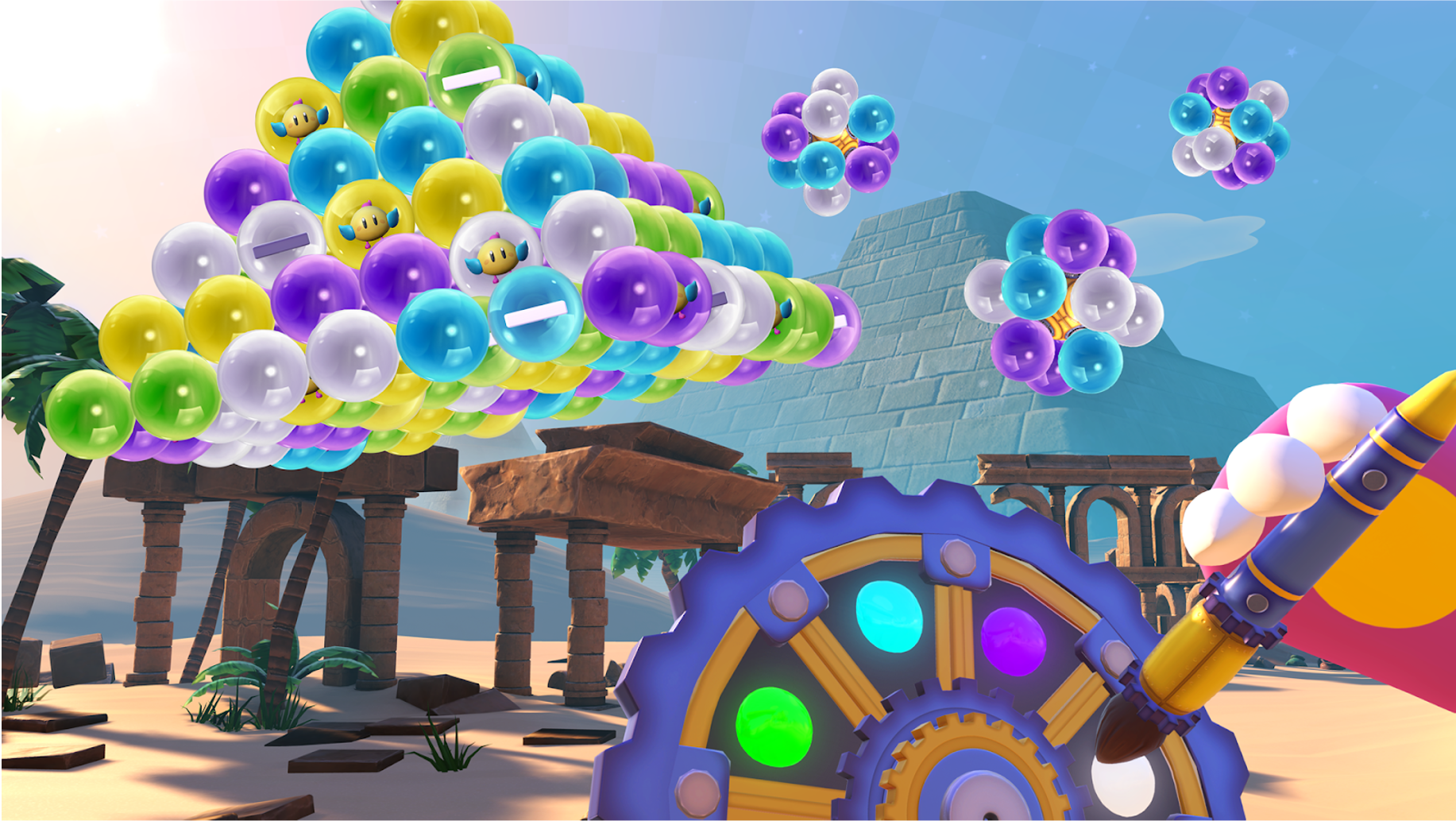 Using VR doesn’t just mean extra physicality either – it also means the typical tropes of Bubble Bobble can be reinvented in the newfound space. “When we were designing it, we wanted to have these very cool, fun, intuitive, VR motion centric interactions to allow players to use these power ups,” Bettleman says. “But how are we going to make this fit in the Bubble Bobble world? That’s when the team riffed on the original Bubble Bobble. Their bubbles had little fire icons on them, and when you collect those now, you can breathe fire. So we thought, ‘okay, what if you need to light the bomb?’ So now if they eat something that was really spicy, you’re breathing fire – wherever you’re looking, you’re just breathing fire, and you need to breathe fire onto the fuse of the bomb to light it.”

It’s not just the power-ups either; the board itself is being reimagined for VR. “Being in VR and being in 3D allows us to take advantage of the fact that it’s not a 2D game board,” Bettleman says. “It’s in 3D space – it has physics, and it has depth to it. You get this amazing depth of play where you start to realise ‘if I aim my shot with an upward angle, it’s going to hit and rotate the board and I’ll be able to see something on the backside with my next shot’. So as you get better and play the game more, you start to realise ‘okay, if I take a little bit of a lighter shot here and more of this angle, I’m going to set myself up for the next shot that’s coming’.” 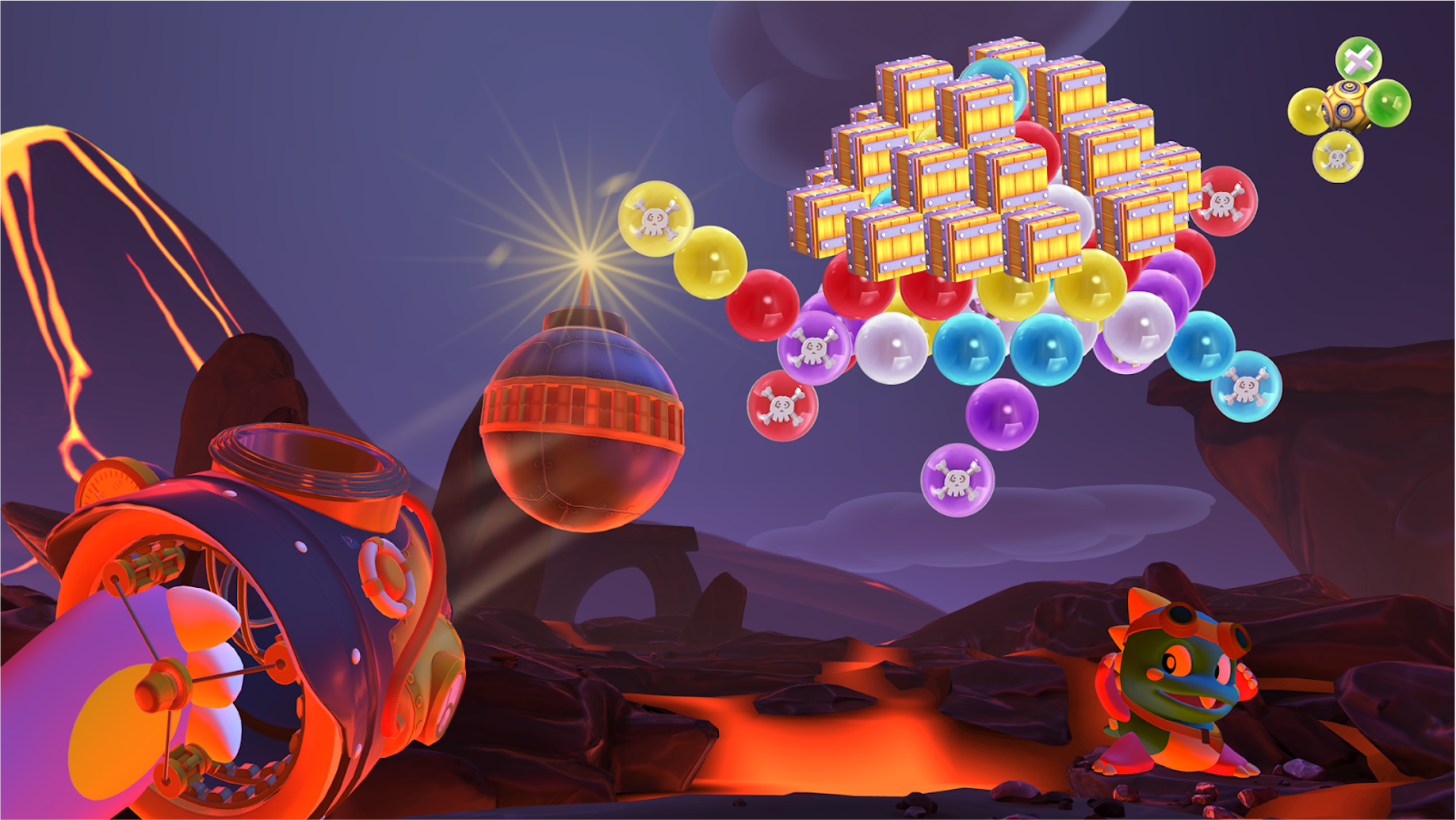 The reason Bubble Bobble typically exists in a 2D space of course is because the game has been around for decades – it just hit its 35th anniversary. When it originally hit arcade machines, the idea that it would one day exist in virtual reality was just unthinkable, and Bettleman spoke about how surreal it was to be trusted with moving the franchise into a new era. “We couldn’t possibly be more excited to partner with Taito and work on a franchise like Bubble Bobble that’s been around for so long,” he says. “It’s just such a thrill to be able to have a hand in something that is so iconic in the video game industry. I grew up in the arcade game industry, it’s a really interesting and unusual background I have, so the golden era of 1980s arcade games is formative in my experience as a game developer. If you would have told me back in the mid ‘80s that I was going to be working on a VR version of this franchise, I don’t know what I would have said. I think my head would have fallen off.”

Puzzle Bobble: Vacation Odyssey launches on Oculus Quest and Quest 2 on May 20.