You are here:
Home / I Spent A Day In Decentraland’s NFT Metaverse So You Don’t Have To

NFTs and the Metaverse. These are the ideas millionaire investors and the strange man in the pub who mumbles to you over a frothy pint of Fosters and blackcurrant are hedging their bets on. At the heart of the Metaverse lie several hundred user-generated projects and marketplaces, a whole ecosystem of experiences, games, and most importantly, transactions, the prospect of which has the planet’s most hideously rich salivating like the gruesome creatures they are. The Metaverse, it turns out, is a bizarre, feverish hellscape, a place of heavy dubstep, bright lights, empty NFT galleries, and strangers telling you to go fuck yourself. Come with me on a journey into Decentraland.

The story begins with a rave, although to call it a rave is to refer to your Year Six school disco as the Hacienda. I wasn’t in attendance but, like some omnipresent internet slug, phoned in from Twitter and watched several nondescript characters dance around a Roblox town hall with some 2004 tinny drum and bass played by two hoodie-wearing DJs via livestream. It was atrocious. Not just atrocious. It was sad. I actually felt sad.

Despite the collective tears of polar bears, cheetahs, and Asian elephants running down my face as I watched the world burn for Roblox raves, I decided the pure weirdness of the event warranted at least some degree of further investigation. What awaited me in Decentraland was more bizarre than I expected. Say hello to Dr. Bruno, my Decentraland alter ego. 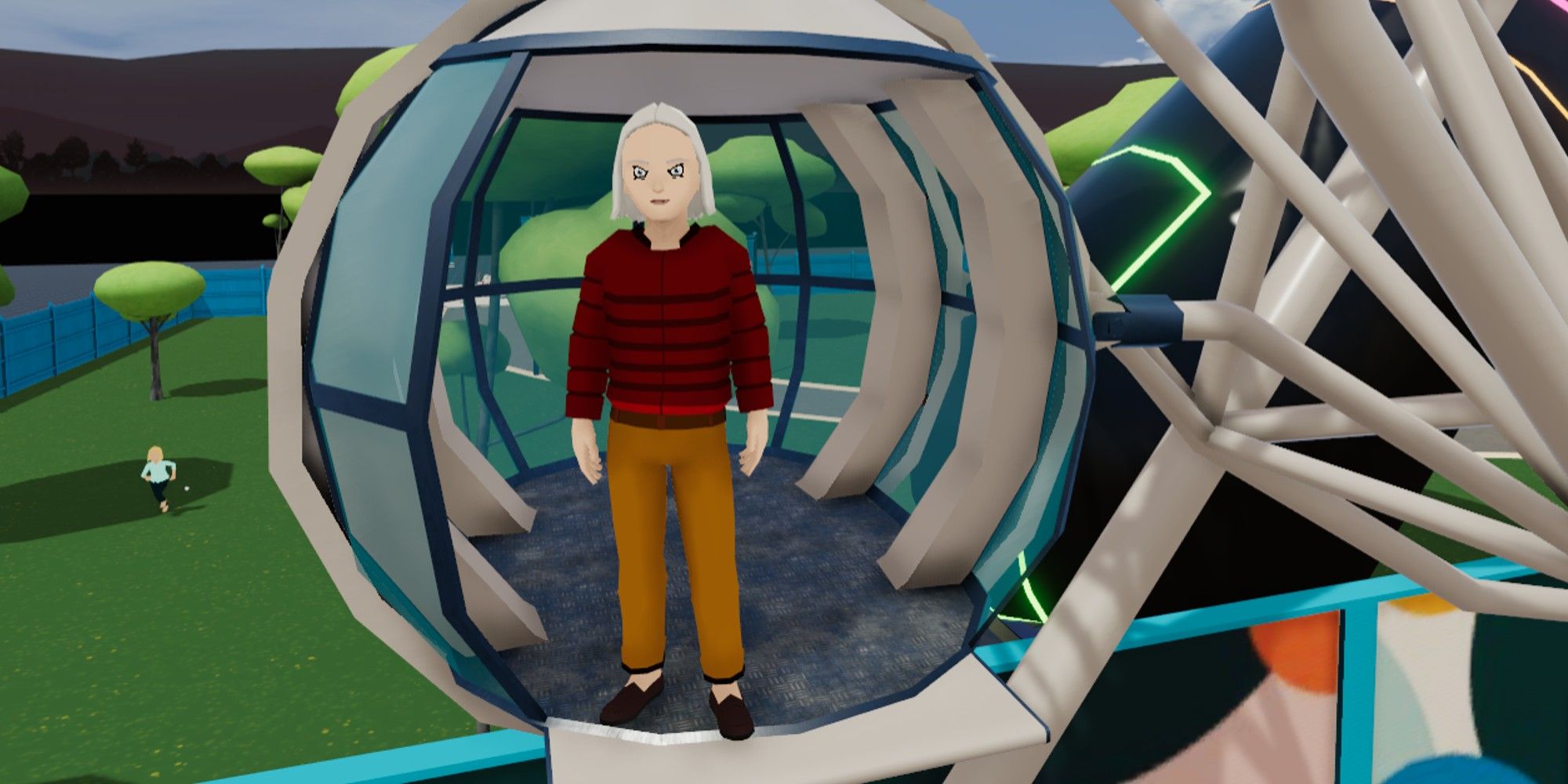 As you can see from the image, I am standing on a Ferris wheel. It’s one of the main attractions attached to the Australian Open live event currently taking place in Decentraland, an event which consists of, as far as I can tell, absolutely no tennis whatsoever, and instead, a bunch of people spamming “WHERE TENNIS” in the chat, overlaid with the strange echoes of people’s microphones – playing sounds, evidently, from the inside of a busy cafe. I have been here before, in another life. Ah, yes. Second Life on a CRT monitor at the back of IT class in 2005.

I meet a friend. His avatar approaches me. “Hi,” he says in the chat. “Hello,” I respond. There is a strange silence between us. “How are you?” I say. His exact words are “fucuk you.” My new friend bounds off into the unrendered distance. Ah, the Metaverse. At last, I have arrived. Inspired by my interaction, I head off in search of fresh adventures, a new land to explore—I head into the Wonder Zone. Yes. That is really its name. Look. I took a photograph. 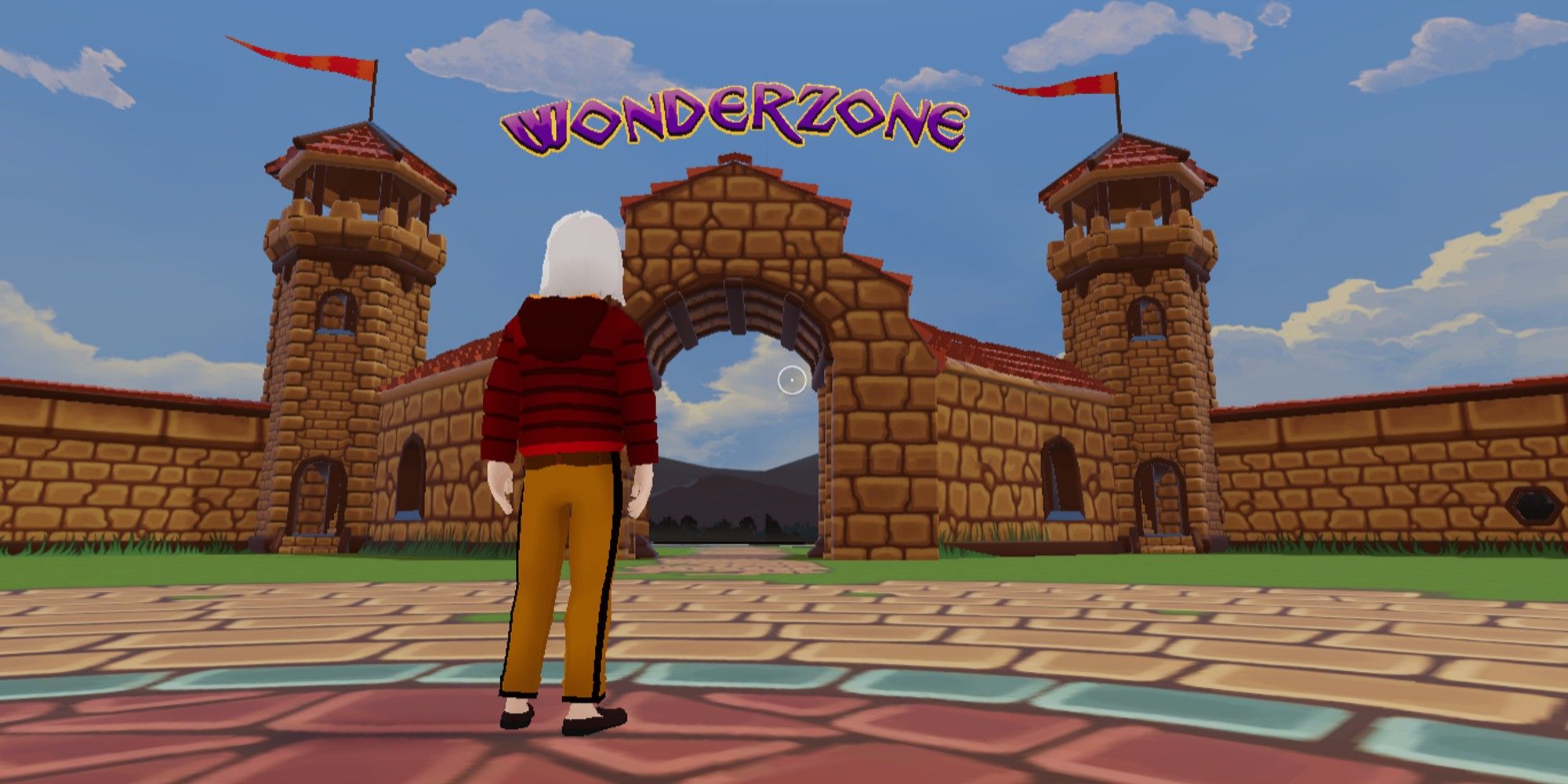 To make sense of this place is to try and organise 45 seven-year-olds on a Minecraft server. In fact, it’s pretty similar to the muddled mess you’d find after a few hours of unbridled play. Except this isn’t fun. It all feels sinister. Like I’m being preyed on, bamboozled, tricked. If virtual worlds could smell, this one would definitely smell like bullshit. A really heavy smell, you know, like when the farmers are out fertilizing their fields.

I fly a dragon, stumble across a poster that seemingly compares Decentraland to London and New York, and find a nightclub that, just like in real life, I can’t get into. I’m too poor. But it’s okay. This nightclub has strange pictures of half-dressed models from ‘90s motorcycle magazines on the walls and a member of staff behind the bar who looks like he’s made out of playdough. A short walk away I find a floating portrait of a middle-aged man wearing glasses. There is a button I can press that sends me to his Twitter page, his bio tells me he is from Switzerland and does a job that I do not understand the name of.

My journey into Decentraland’s fever-dream wasteland continues with a short jaunt through unpurchased territory, a sort of winter wonderland, with pine trees and snow and a setting sun. For a moment there is a sensation of peace. Then I am slapped over the head by a massive BoredApe in a museum celebrating a series of Supreme backpacks, which promptly makes my Metaverse crash. Decentraland is like this—any time it has to render many NFTs it lags, stutters, and dies. I think my alter ego has just suffered a stroke.

The next place I encounter is terrifying. It’s an odd, low-lying building, covered in doors. Like any normal human being, I go inside. There is a room with three more doors. A strange crackling sound plays in the background. I am deeply, deeply unsettled. I go through the next set of doors, another room, more doors, and another room, and more doors—all the while the sound grows in screeching intensity. Oh god. “Help me, mother, I’m trapped inside an NFT!” 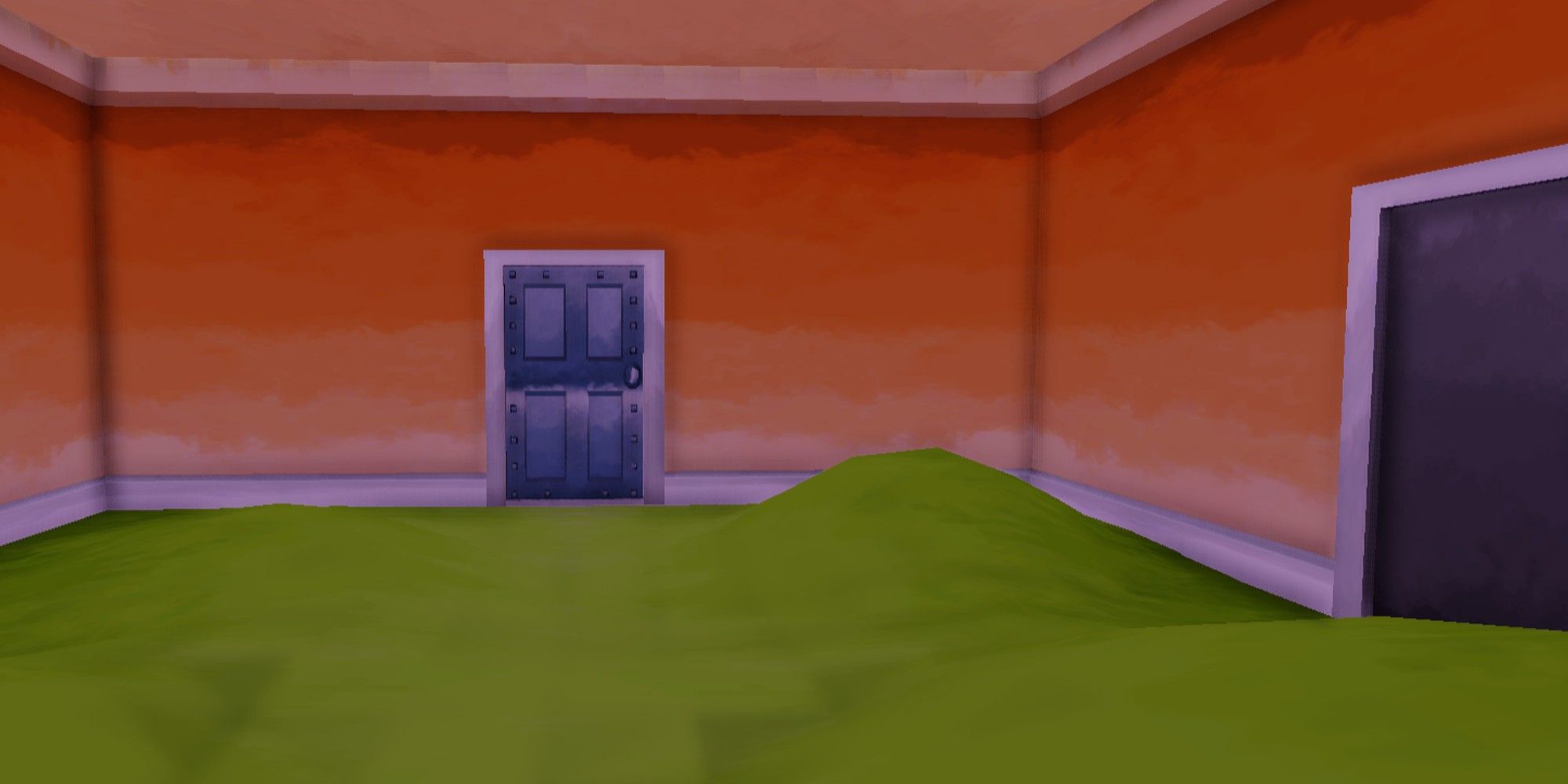 I encounter another player, and he almost makes me shit my virtual self. Together we navigate our way out of the maze of doors. We say nothing to each other. It is silent as we part ways. A void. Empty of feeling or emotion. Here we are in our silence. Imagine stumbling across Bruno in a building of haunted doors. No wonder the poor fucker didn’t say anything to me. 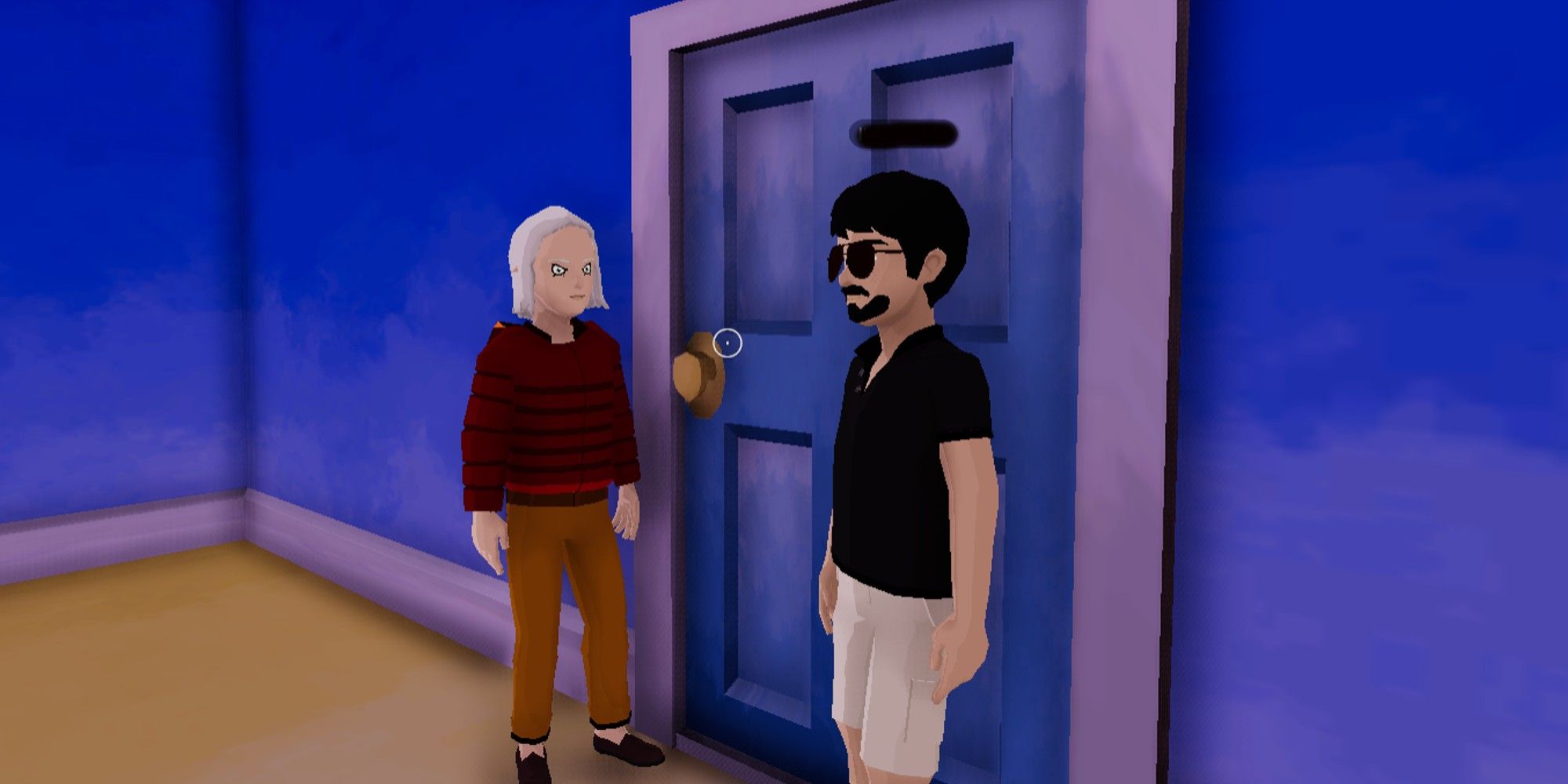 Once I had escaped the NFT prison, I ventured onward, into a gallery where I was accosted by an aggressive frog with massive eyes and a truly awful taste in dubstep. Further than that, even, across the wastes, I find empty plots of land selling for 10 Ethereum (that’s almost $2,500), more museums, some hanging with empty placeholder NFTs, blank canvases that just say NFT in the middle—these are, somehow, better than Apes. There are clubs and bars and bright flashing lights, bizarre pyramids, and funfairs with dancing monsters on stilts. In the background plays this plinky-plop music, the sort of stuff you put on for a baby. On and on the Metaverse goes, stretching into the unknown. My legs are tired. I feel like I’m on a comedown.

Decentraland is one of the most bewildering places I’ve ever visited. I leave none the wiser as to why it exists, what its purpose is. Navigating through the non-speak found across the web, in Discord forums, and in Twitter threads, doesn’t help me put together a coherent thought about this space. It is a sparse landscape, and for the majority of my time there, it felt unsettling—I imagine that’s what it feels like to walk around an empty modern art museum at night. The Metaverse crashes again, and this time I do not go back.