You are here:
Home / How I Found Comfort In Dead By Daylight’s Pride Celebration

How I Found Comfort In Dead By Daylight’s Pride Celebration

My earliest memories of online gaming conditioned me to expect the worst. As a queer woman with beginnings in Counter-Strike and Halo 3, I’m no stranger to an earful of slurs and post-game lobbies littered with hate speech. I can usually get it together, hit the block button, and move on, but on my bad days, it’s crushing. That’s why when Behaviour announced its activities for Pride Month, I was hit with an odd mixture of relief and dread. Relieved that one of my favorite developers thought I was important enough to express support for, but also dreading in-game harassment for wearing a Pride cosmetic. However, that’s not quite how it went – on the contrary, my little celebration of queerness in Dead by Daylight has been a beautiful surprise.

Last week, Dead by Daylight’s developer announced its festivities for Pride Month. In its month-long celebration, the studio plans to raise money for LGBT+ charity The Trevor Project, highlight queer content creators, and seek consultation on developing queer characters and content. These were its most important efforts, the ones I was most excited to see, but the last addition of a rainbow flag charm was cute, and I wanted to show it off. 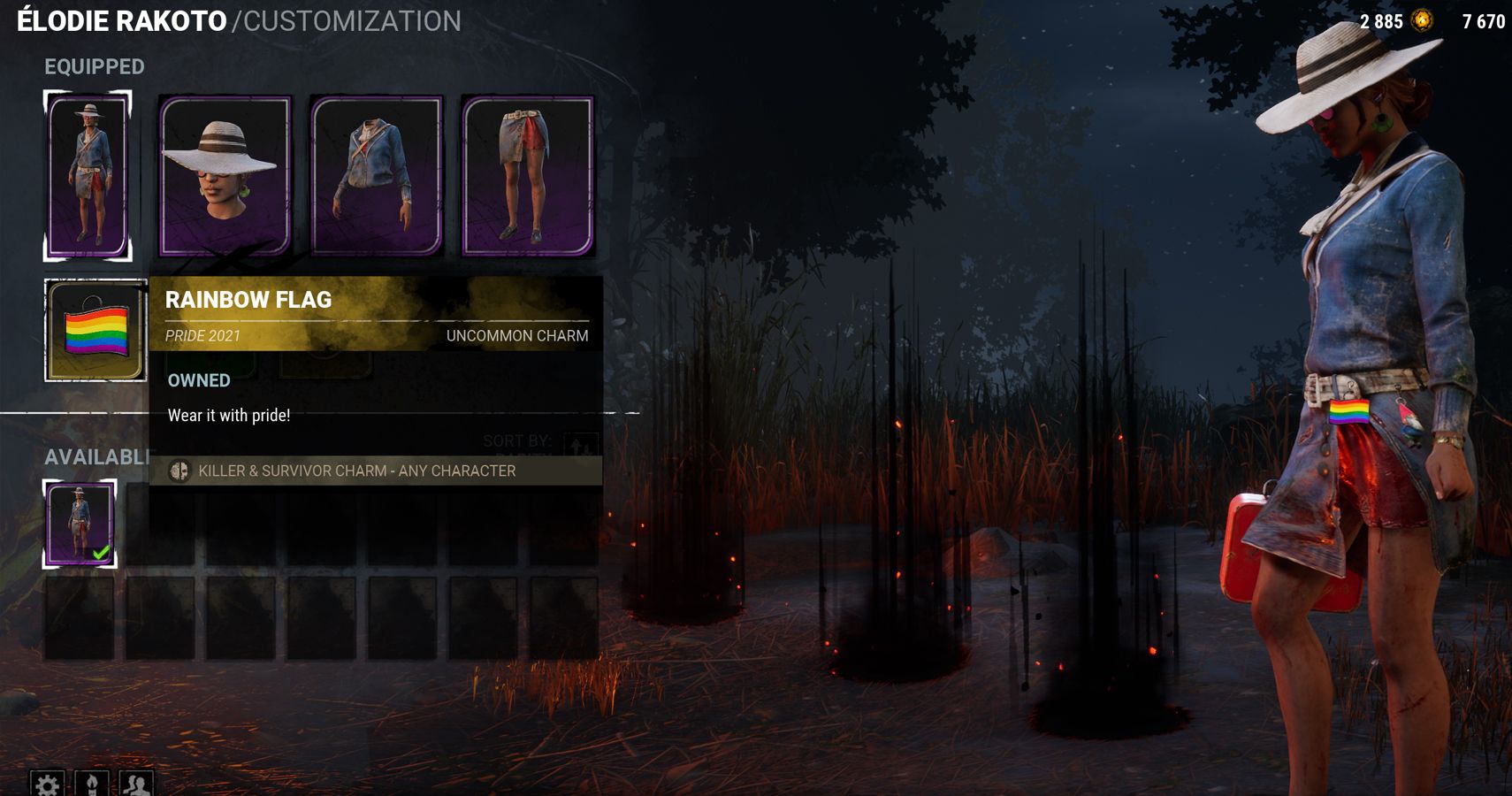 So I popped it on my favorite character, Elodie, and immediately felt a bit anxious. I reckoned the big rainbow on my hip meant toxic killers would tunnel me, or perhaps some survivors on my team would leave me to die and sabotage me. I played a couple of games, though, and nothing happened. I began to notice other players were adding the flag to their outfits, and it didn’t take long for me to wind up in a few matches where everyone was sporting one.

After a few games, I encountered a group of survivors that all spawned with the flag charms. As we made our way over to work on a generator, we noticed the killer in the match also had a Pride flag on their hooks. Instead of running to our objective, we all just stood there for a moment and crouched up and down, using the game’s systems to express our collective joy at our shared fashion sense.

The killer found us this way, and after smacking one of us about, they realized what we were doing. So there we were, four survivors and one killer – a Mikey – all dancing around this one Pride hook. After a while, we actually started playing the game, but it was a cute moment. The post-game lobby was probably the most pleasant one I’ve ever encountered, and we all left after sharing a few compliments on plays and a round of GGs.

While I haven’t had any more encounters quite as joyous as this, I’ve still been in a ton of lobbies with Pride flags, and it just made me feel a little safer about my matches. This feeling is why we beg for things like identifying Twitch tags; this is why we want places specifically carved out for us to find community. When I found myself with other players sporting the charms, I was hopeful there would be no onslaught of hate speech later on.

None of this is to say we should pat studios on the back for doing the barest of minimums, but the silence and sometimes outright refusal to include us is painful. I don’t think one day of Dead by Daylight lobbies will speak to the experience at large, and I know damn well there are folks out there using the event to cause harm. Yet, for one moment, I felt okay. And I guess it speaks to the sad state of things – I got quite excited about something as silly as an in-game cosmetic. The Pride charm wouldn’t be anything without Behaviour’s other steps, though, like donations and seeking consultation, so I take comfort in knowing there’s some work going on behind the scenes too. So, when I boot up Dead by Daylight tonight, I hope I see a few more folks sporting rainbow flags while running through Coldwind Farms with me.