You are here:
Home / Guarma Is One Of The Best Bits In Red Dead Redemption 2

Hear me out on this, okay? I've played Red Dead Redemption 2 three times, and every time I've wound up in Guarma, I've let out an audible sigh. RDR2 is a tale of the end of the Old West, and the end of the men who lived there. It's tragic, violent, and unearths a hidden sensitivity behind the bloodshed and the bullets, and works best when it is kept contained tightly. Guarma upsets all that. It's not in the game's facsimile for the US at all, and feels out of rhythm to the rest of the story. It could, and should, have been trimmed from the game completely because of how wildly it disrupts the game's pacing, but if you play it right, it becomes the best part of Red Dead Redemption 2.

The first time you play it, you will not enjoy it. I assume most people reading this will have played it at least once, and may well be of the opinion that the Guarma section is terrible. That's only if you view RDR2 as a purely narrative experience though, which should not hold true on second, third, or fourth playthroughs. First time? Yeah, cut it. Slows you down, locks you into a new map with seemingly little reason, and all it serves to show is Dutch's descent into violence, while leaving room for Sadie to emerge as leader of the gang in your absence. All of those things could have been done without requiring Guarma to exist.

Red Dead Redemption 2 is not a game with multiple paths though. You can be honourable on not, but the nature of Arthur's journey feels like it demands something of an honourable playthrough, so I'm not sure that counts. There is too much of the game to see all in one go for most players, and the best way to play in any case is to do nothing, so if you enjoyed the game even slightly it's worth diving in again just to go slow. The story is a compelling part of Red Dead, but after seeing it the first time, it's much easier to let it go while you adventure off and wander across the West. Plus, while you might have hurried to free Micah from jail out of van der Linde gang loyalty the first time, you get to let him rot there on your second outing. 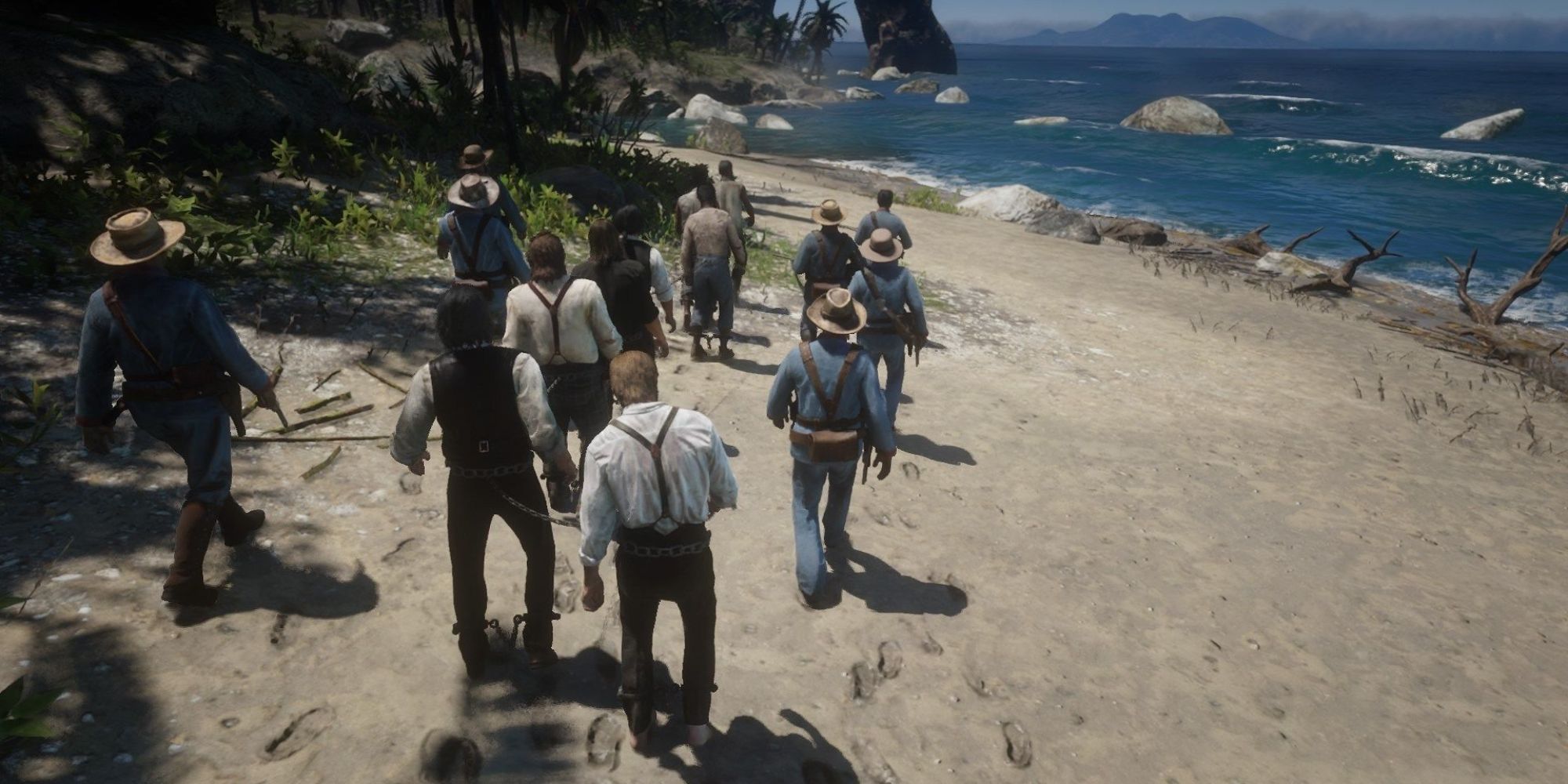 This is where Guarma shines. Most of us hate it because it completely upends the story, but on repeat playthroughs, the story matters far less. It's the same reason it took me three playthroughs to appreciate the snow in the game – it initially drags down all momentum right at the start, holding you back from the cowboy adventure of your dreams. It's not until later that you realise why the game pumps the brakes at the start – Morgan and the van der Lindes are up against it and find themselves stranded in unknown territory. It's a metaphor both for the gang's upcoming hardships and the winter of their way of life, as well as introducing tension and immediately showcasing real consequences of their last job going wrong. Once you get control to wander the entire map, returning to the snow later on also brings about some of the game's most interesting stories and scenery.

Guarma is much the same. It's harder to justify its place in the story, but if you don't look at it from a purely narrative perspective, it introduces a sense of freshness to the game. Initially, it catches you off guard – one mission ends and you wake up in Guarma, all side quests paused, all equipment stripped away, with no way out but through. On repeat playthroughs, you can get your affairs in order before setting off, meaning you're choosing when to take your island vacation. 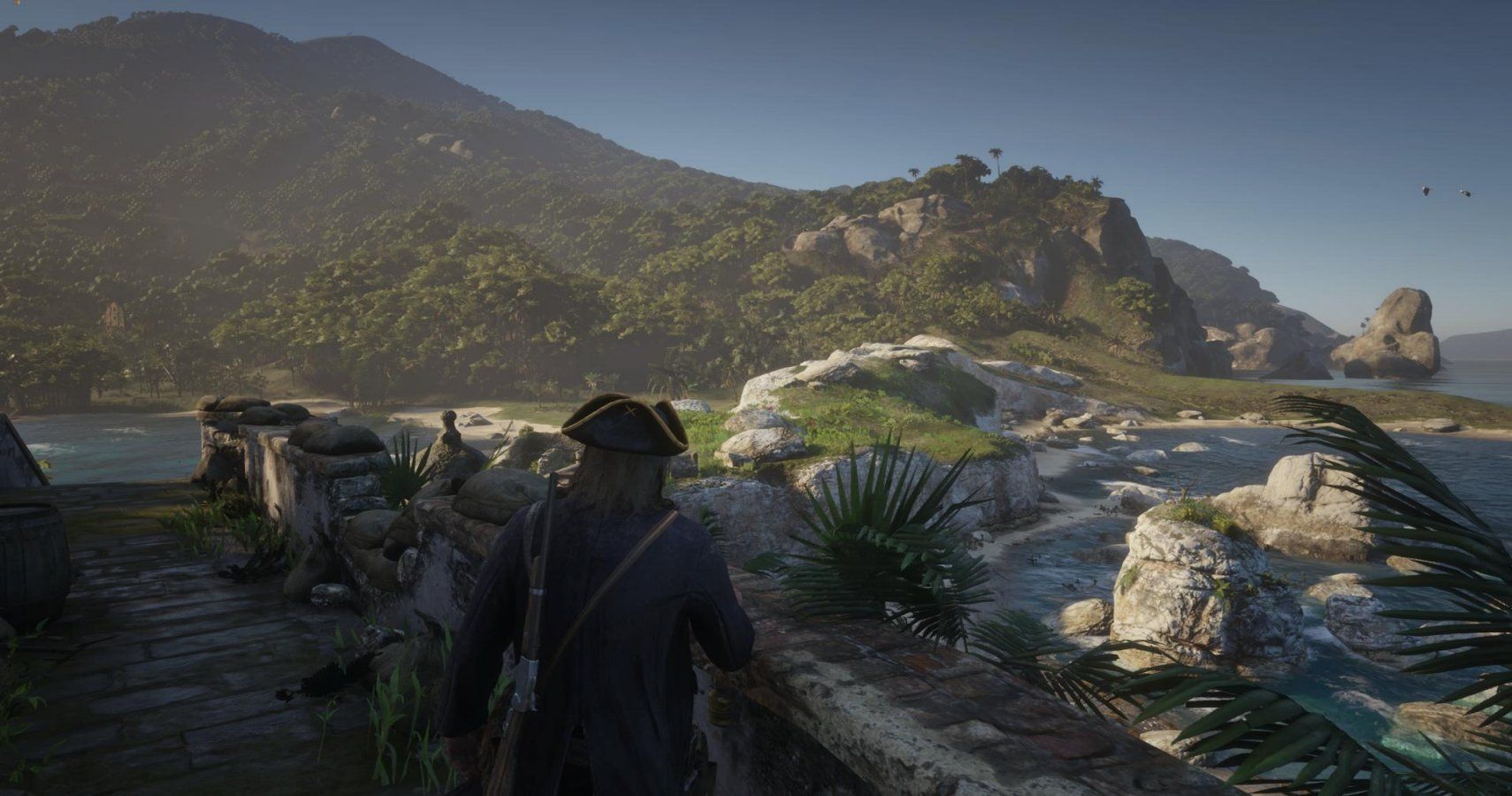 In insolation, the missions in Guarma are fantastic. They have a more bombastic feel to them than the rest of the game, more influenced by old adventure movies than they are Westerns. It's a glimpse of what a Rockstar-led Uncharted game might look like, and divorced from the constant clockwatching as you try to get back to the Rockstar-led Red Dead Redemption 2 game you paid good money for and would very much like to get back playing, it's difficult not to admire Guarma.

It's also bursting with new discoveries for you. Although there aren't the abundance of Strangers in Guarma that you get in the rest of the game – likely because return is impossible and therefore most tasks would go unfinished – there are plenty of unique animals and locations unlike anything else you'll find on the main map. It's a shame Arthur's resources are so stripped back here, making exploration less fun than it otherwise could have been, but if you wander off the main path in between missions, you just might fall in love with Guarma. Or maybe you'll still hate it and want to get back to playing the cowboy game in cowboy land. Only one way to find out.