You are here:
Home / Demeo Review: My Virtual D&D Prayers Have Been Answered

Demeo Review: My Virtual D&D Prayers Have Been Answered

As a casual Dungeons & Dragons player (and DM), one of, if not the most difficult thing about playing is getting my group together at a date and time that works for everyone. We’re all 35-plus-years-old, and all of us have kids (excluding my two teenage nephews who are part of the group). Obviously, the pandemic made getting together impossible, meaning we haven’t actually played our campaign – we’re currently playing through the Curse of Strahd module – in well over a year. Sure, we could have taken advantage of online platforms like Roll20 and Zoom to continue our campaign, but I think it’s just the in-person comradery that we appreciate while playing, possibly even more than playing D&D itself.

At any rate, I’ve been pining for some kind of solo or online D&D-esque experience for myself, whether that be through an online platform with other players, or running a solo adventure on my own. Luckily for me, Resolution Games was one step ahead of me, already working on Demeo – an RPG dungeon crawler that takes the in-person tabletop experience and puts it into a VR and PC experience. Having had the opportunity to play Demeo for myself, along with a group of other online players, I can excitedly proclaim that this game is everything I’ve ever wanted in a digital D&D tabletop experience. 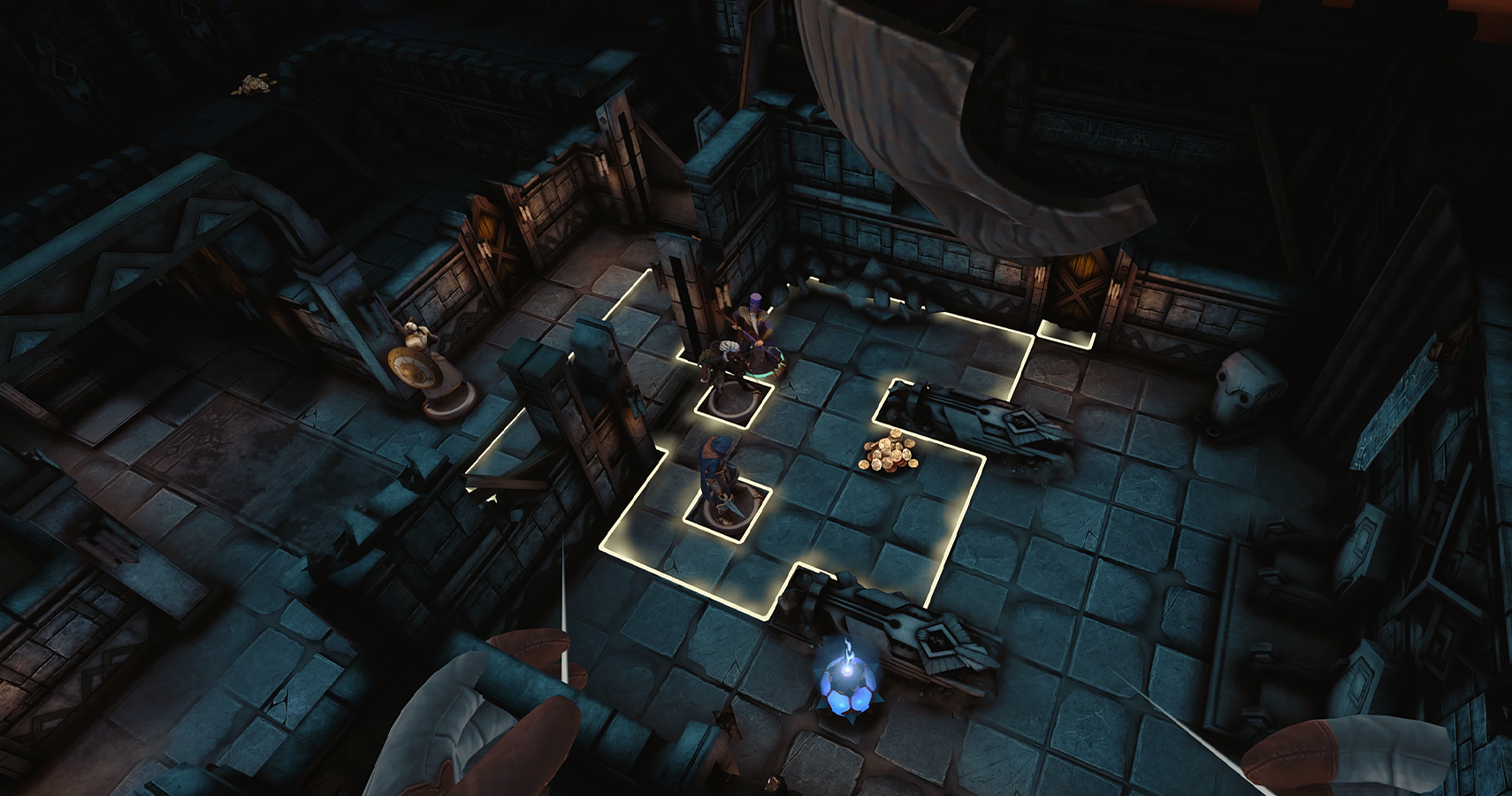 By nature, Demeo is a fantasy roguelike where up to four players can take on the role of a hunter, sorcerer, assassin, or guardian. The characters – coming in the form of miniature figurines – are placed on a literal gameboard that is set up on a table in a basement setting, a la Stranger Things. Gameplay is pretty straightforward, especially if you’re familiar with the mechanics of most turn-based tabletop RPGs. You’ll move your selected character throughout the corrupted catacombs as you search for both the key and the exit. Although you’re able to see the layout of the dungeon in its entirety, fog of war prevents you from seeing anything beyond your field of view (within reason). That room you’re about to enter? It might just have the healing fountain you’ve been looking for, or a mound of gold that can be picked up and split amongst the party. Conversely, you might just be walking into a room filled with respawning rat nests, a swarm of spiders, evil elven archers, and a massive fire elemental. That’s not an exaggeration, either. I’ve often run into rooms where the enemies outnumber the party members four-to-one, sometimes even more, depending on the positioning of each party member.

Each character comes with their own unique abilities and weapons, along with a melee attack. Special attacks and abilities – such as using health potions, conjuring up or turning enemies into temporary party members, or unleashing a barrage of poison arrows that rain down from above – are utilized through the game’s deck building mechanic. You start each round with a handful of cards. Some are one-time use abilities, whereas others, like the archer’s ranged arrow attack, remain in your hand and can be used following a cool down. You can purchase and sell cards and abilities from the bazaar at the end of each level, allowing you to customize your strategy depending on your group’s needs or your own personal playstyle. 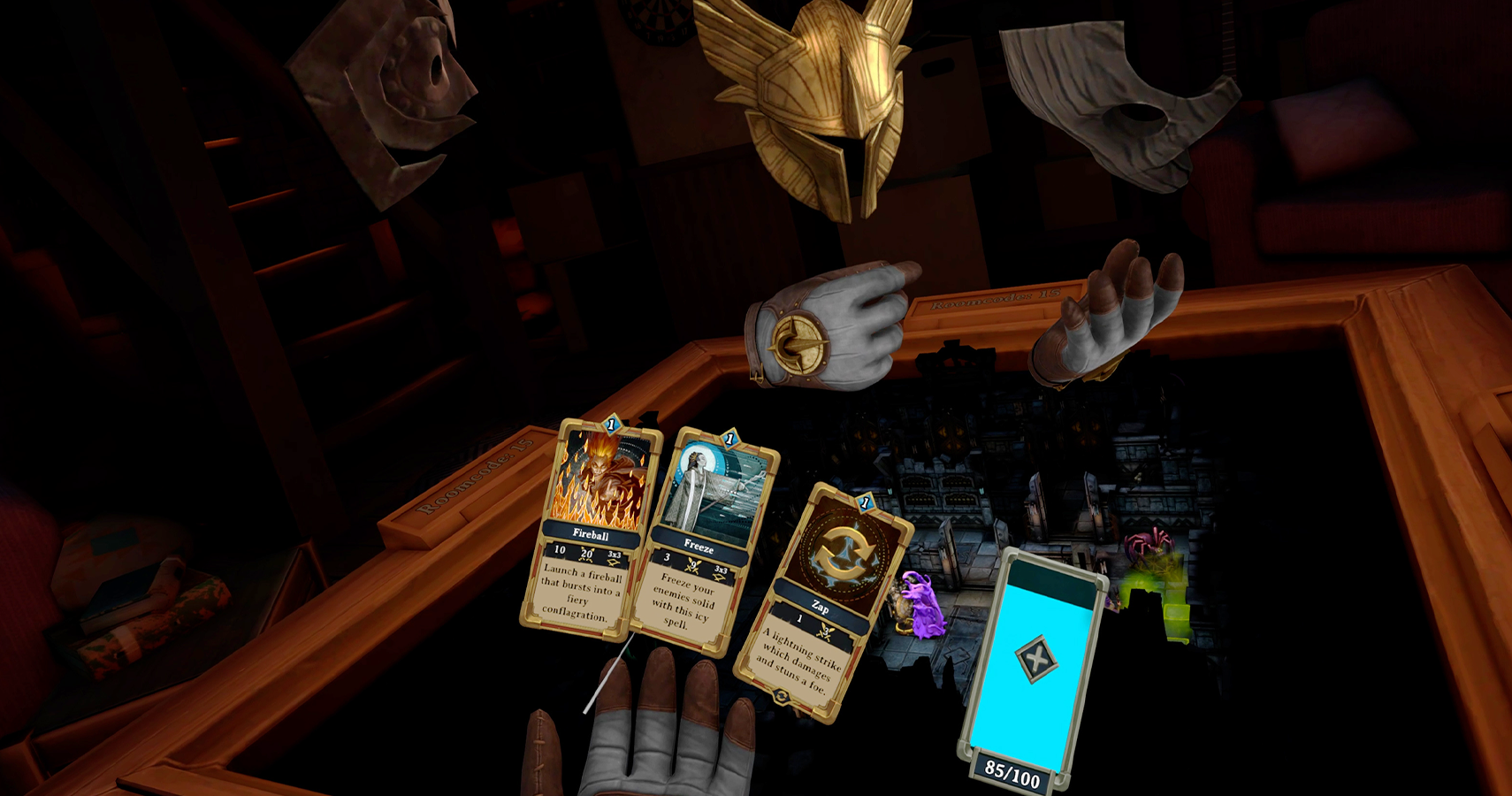 The best thing about Demeo is its level of immersion. Playing on the Oculus Quest, I literally feel like I’m playing at a table with a bunch of miniatures. Even better is the fact that I can play the game sitting comfortably in my chair in the stationary position – just like I would be in a real-life tabletop session. You can spin and reposition yourself around the table so that you can get the best viewing angle whether or not it’s your turn. You can even zoom in and out, changing from the perspective of a top-down-style tabletop session to that of literally being in the midst of battle in a POV setting, the walls of the catacombs rising high above your head. The dungeon and characters seamlessly scale as you zoom in and out, allowing you to check things out from multiple angles before making your next move.

Some small, but important quality of life features are also present in Demeo, such as the ability to use a laser pointer-type of indicator to show who or what on the map you may be referring to while talking with the group. Additionally, while you can see the subtle heads of the people playing, you can only see the hands of the person whose turn it is. Other players’ hands become slightly glowing wisps, which helps keep the play area free of clutter so that everyone can see. 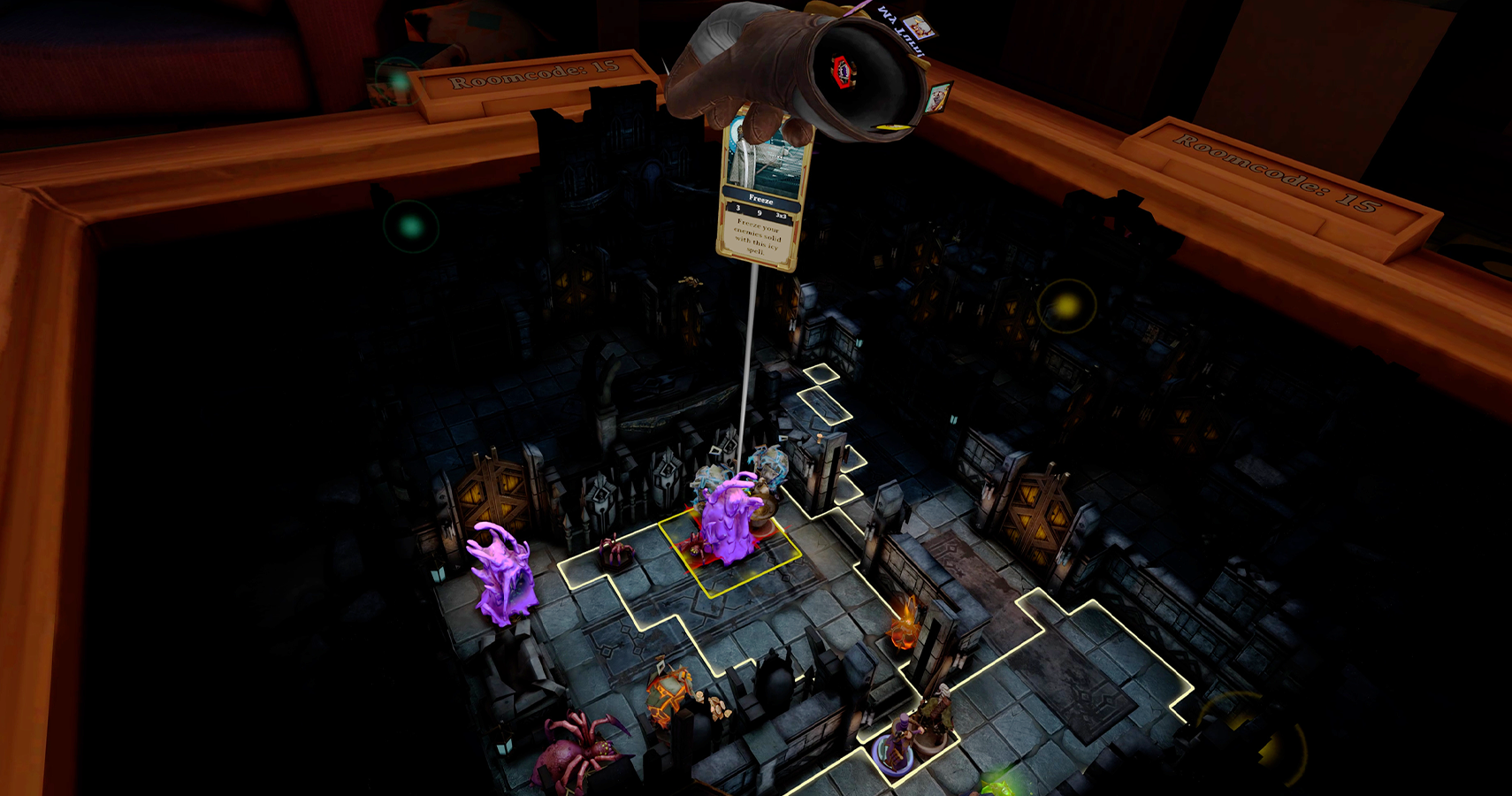 Demeo comes as a VR title on the Oculus Quest Store, along with Steam for Oculus Quest and Rift, HTC Vive, Valve Index, and Windows Mixed Reality headsets. However, non-VR PC players are also able to join in on the fun, with Demeo being the first title from Resolution Games to feature that cross-platform functionality. My playthroughs consisted of playing with other VR headset players, but I’m very excited to be able to play Demeo with my nephews who don’t own a VR device. Cross-play opens up a vastly wider audience that can access Demeo, which will be a huge asset for the VR community moving forward.

With its last release, Carly and the Reaperman, Resolution Games showed its hand a bit as to what players could expect in Demeo. I already had high expectations for Demeo, and Carly and the Reaperman only increased those expectations. I was still, however, absolutely blown away by the tabletop RPG experience that Demeo offers. Not once did I experience any sort of motion sickness, meaning I can play Demeo for extended periods of time – far more than any other VR title can boast with me. I can’t wait to play Demeo with my regular D&D group as we ease our way back into in-person sessions. As a solo adventurer, though, Demeo is perfect for when I’m in need of a quick-play session with other players from around the globe.

An Oculus Quest copy of Demeo was provided to TheGamer for this review. Demeo is now available on the Oculus Quest Store, as well as Steam for Oculus Quest and Rift, HTC Vive, Valve Index, and Windows Mixed Reality devices.