You are here:
Home / Deep Rock Galactic Is The Most Metal Game I Have Ever Played

Rock and stone. That’s how I’m going to greet my mates once we’re allowed to go to the pub again. I might even get it tattooed, which would be pretty metal – but nowhere near as metal as Deep Rock Galactic.

I’ve spent the last few days devouring games via Game Pass, most of which have been on my list for ages. Some of these are great – Monster Train is one of the best roguelikes I’ve ever played. Others… not so much. I can appreciate the charm of Monster Sanctuary, but it suffers from never really knowing what it wants to be.

Also, no, I didn’t just play games with “Monster” in the title. I also played Deep Rock Galactic for the first time, which is easily the most metal game I’ve ever encountered.

Picture this: you’re a bearded and burly space dwarf sculling tankards of ale in an intergalactic bar run by some kind of weird floating robot. All of a sudden you’re out of space money and can’t afford any more space beer, so you turn to the space capitalists who want you to mine space rocks on dangerous space planets in exchange for a hefty wad of space cash. Get your gear, Gunner. Rock and stone. 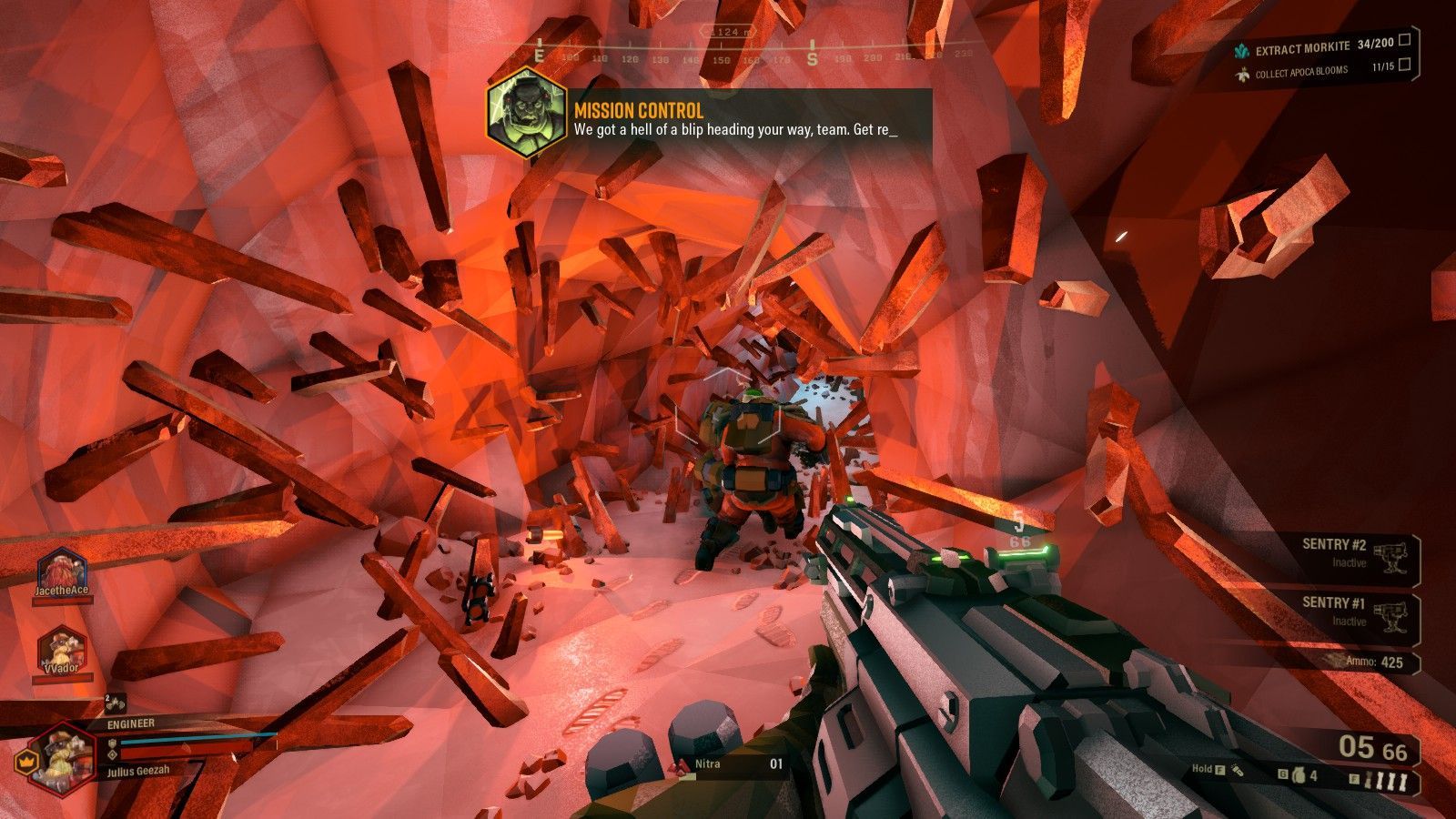 There’s a lot to be said about the whole dynamic above, and about how Deep Rock Galactic is scathing in its critique of how a realistic expansion to space would inevitably be commandeered by whichever companies had the largest piggy banks. The tutorial mission specifically goes into this – your instructor, who is working their “cozy job” from mission control according to Scout, basically just goes, “Ah, nice knowing you” the second a spider shows up. All this lad cares about is Molly the Mule bringing 200 pieces of gold back to the drop pod. To him, you’re just the disposable means of obtaining it, a literal dwarven drill who can be easily replaced by a trip to a dingy pub. Little does Mr. Space Capitalist know, Gunner has an immensely metal turret that feels ripped right out of Doom. Rip and tear, rock and stone – I think it works.

These sections actually remind me of Doom quite a lot. They’re not as complex, mind, and you’ve got far fewer guns to choose from – also, the lack of demons brings the metal score down a bit. But then you remember that, actually, you’re a dwarven space mercenary who crash lands on hostile planets to lug a load of heavy rocks out. On your first mission, Gunner says he’s been put through a “baptism by fire,” but I don’t reckon him or any of the other dwarves would have it any other way.

This is why I love “Rock and stone” so much – it doesn’t even really make sense, but it doesn’t have to. Unlike the sturdy and stubborn ore veins it represents, it’s completely mutable. Rock and stone is a greeting, a farewell, a mantra, even a weird oath of sorts. And so when a cluster of spiders erupts out of a wall and descends on you spitting wicked venom, the only thing left to do is plunge your pickaxe into the air, bellowing “rock and stone” at the top of your lungs before whipping out a minigun and furiously shooting to the tempo of a battered double kick pedal. The music is heavy and it’s cool that you’re a dwarf, but it’s the whole scenario that’s metal – the precision of the framing and the attitude of the picture it contains. 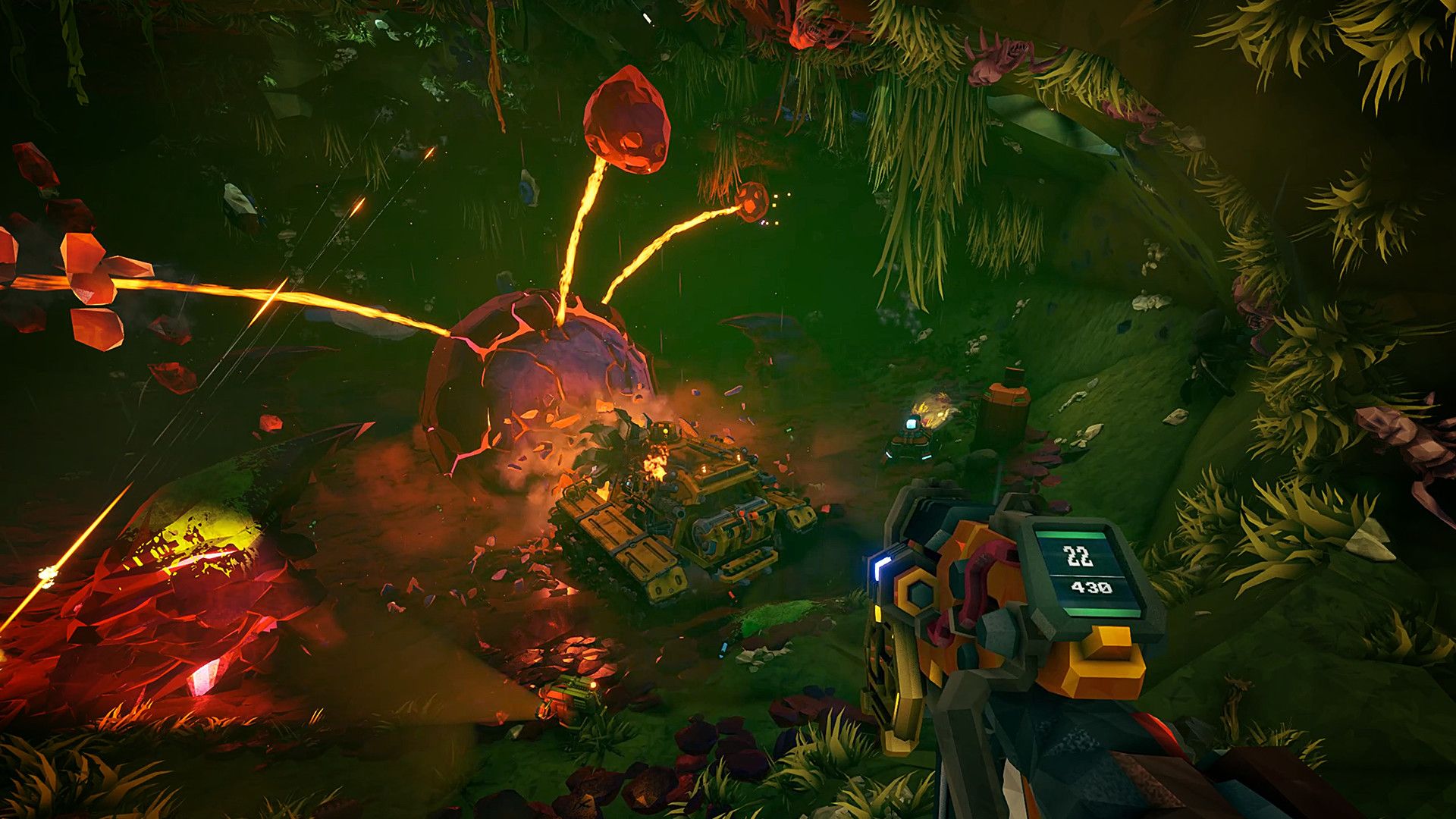 What people sometimes forget about metal is that it’s not all demons and djent riffs. There’s a playfulness to metal that makes it different to other genres and subcultures, a sense of community based on mutual respect and recognition. That’s what you’re seeing when you see someone making the sign of the horns, or sticking their tongue out, or just flat out screaming towards the heavens in the middle of a mosh pit as if they’re completely incapable of being affected by the maelstrom of bodies whirling around them. Then someone inevitably smashes into them, realizes, picks them up, asks if they’re alright, and both people just turn around and launch themselves at someone else as if nothing happened.

The aspect of Deep Rock Galactic that made all of this click with me is ostensibly pretty minor, but it’s honestly what made me say “this is so metal” while I was playing yesterday. After you accept an assignment, you obviously need to make your way to the planet. Presumably, the humongous space rig you live on isn’t properly equipped to land in little caves packed with precious metals and precarious monsters, so you make your way down using some kind of weird elevator drop pod thing.

As you’re falling, right, there’s rubble literally erupting all around you. If you’ve ever experienced turbulence on an aeroplane, imagine that, except all of the plane windows are open and there’s a storm bad enough to prove the existence of Zeus. 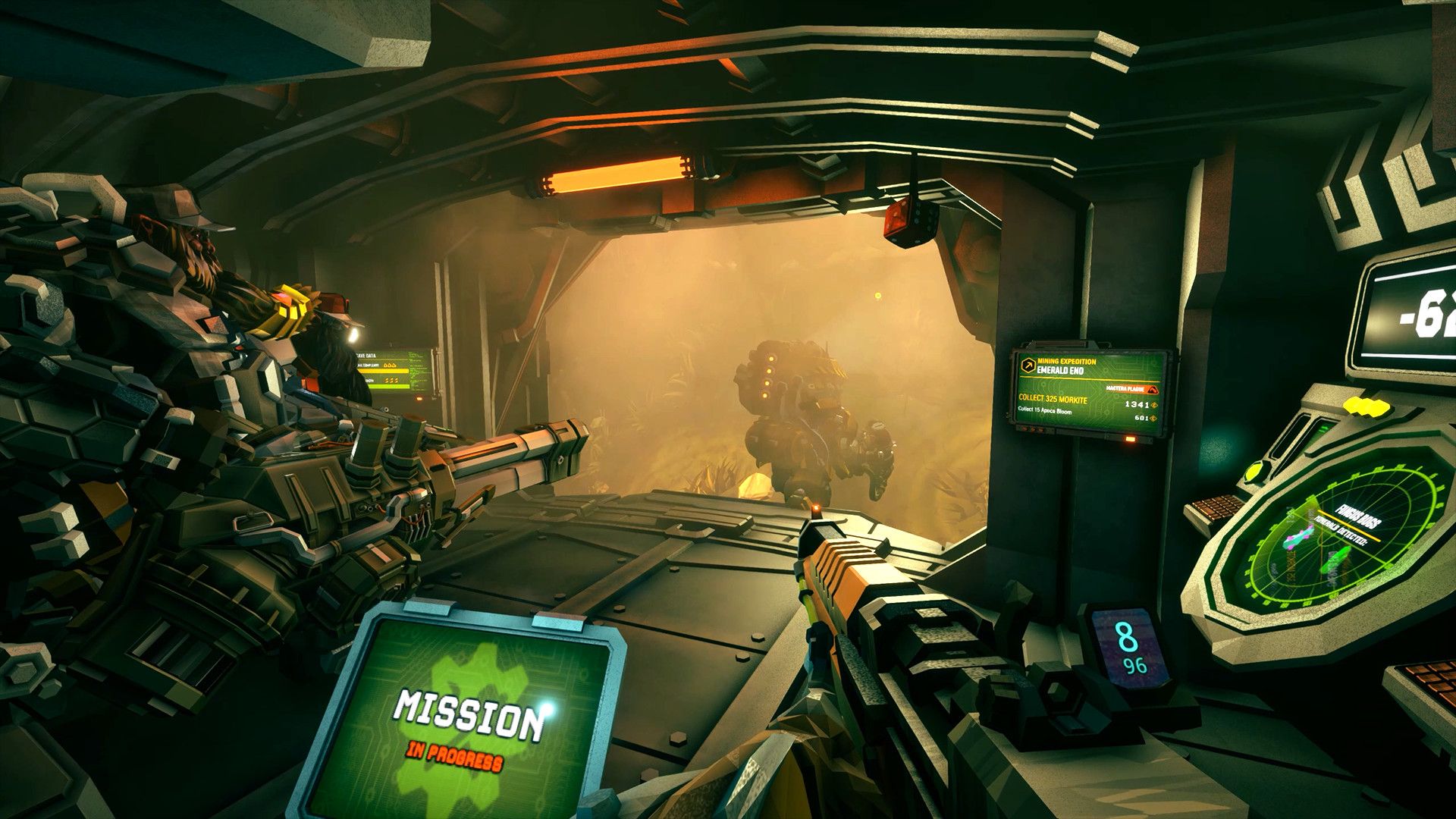 So what does our little space dwarf do? Well, he stands there, he has a little look around. And then, after a while, the drop pod hits the ground with a chunky thud. Before he pulls out his pickaxe, or his guns, or whatever other quirky gadgets he’s got for the expedition, he spots a pair of fuzzy dice hanging by the door, like the ones you’d expect someone who watches too much Austin Powers to have in their car.

Gunner heads over, punches the dice, has a little giggle, and he’s off on his way. “Rock and stone!” he yells, completely unphased by the bumpy trip down or the bumpier trip ahead. I know Deep Rock Galactic is first-person, but I can see the smile on his face in my mind’s eye. He’s amped up to 11 and ready to go – I don’t think there are any other games capable of capturing something as perfectly metal as that.

Next: Xbox Game Pass Is The Best Thing That Ever Happened To Gaming 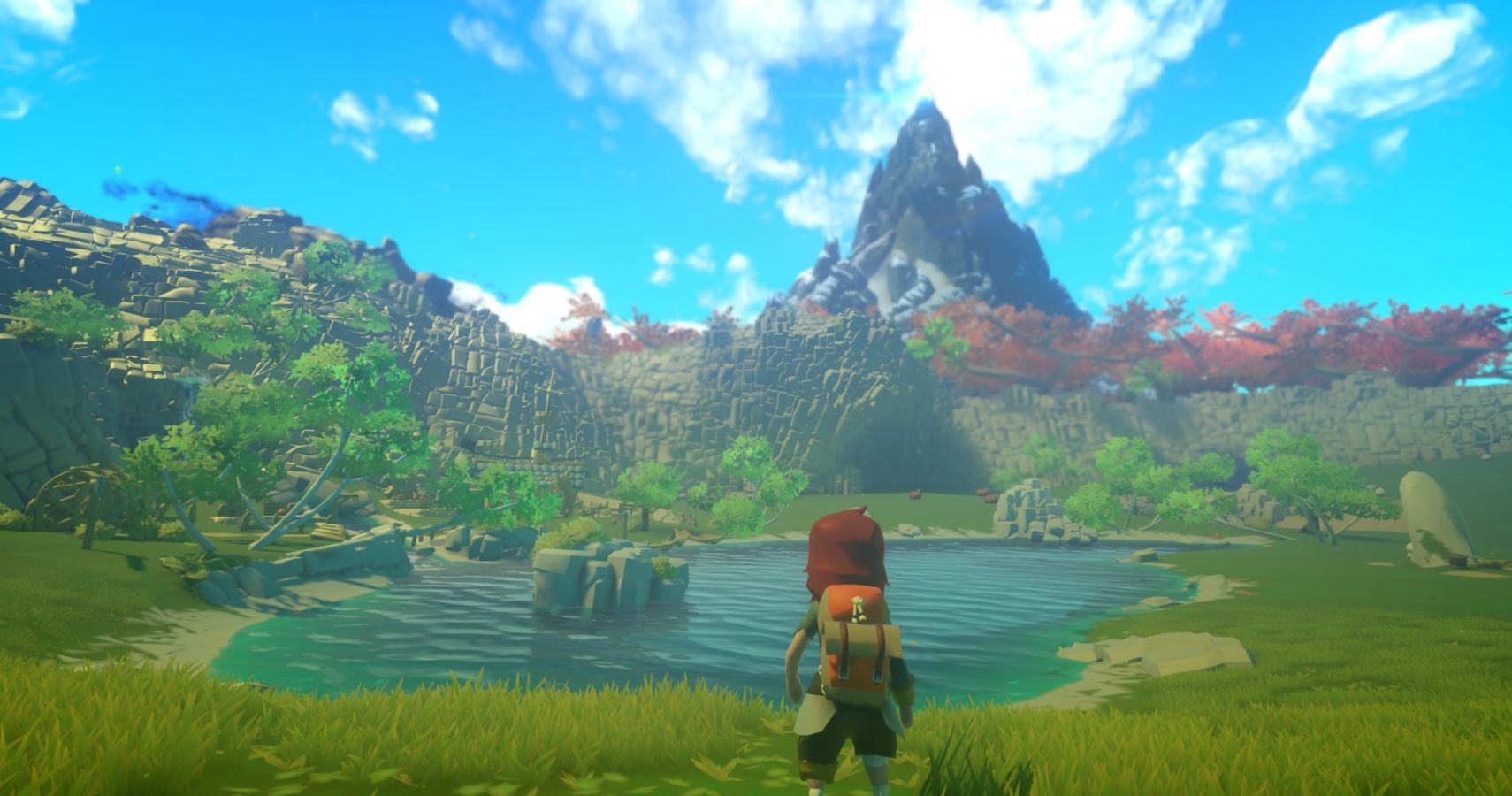 RELATED NEWS
What We Want From Pokémon Legends: Arceus
Pokemon Legends Arceus, The Feudal Sinnoh Spin-Off, Could Be Pokemon’s Rogue One – AKA The Best Star Wars Movie
My Advice For Pokemon Diamond & Pearl: Select New Game, Choose Chimchar, Win
Open World Pokemon Is Weird And Scary To Me
Recent Posts