You are here:
Home / Crash Team Racing: Nitro Fueled Is A Lesson In Loving Side Characters

Crash Team Racing: Nitro Fueled Is A Lesson In Loving Side Characters

I don’t really do service games, or even online ones very often, so when you look at my ‘most played’ list for any given year, it’s mostly ranked by which single player titles took the longest to beat. The exception to this rule is Crash Team Racing: Nitro Fueled, which has stolen over 300 hours of my life away from me. Those might seem like rookie numbers, but last year I spent four (that’s one, two, three, four) hours playing online games on PlayStation. A few Animal Crossing island tours can be added to the list from Nintendo Switch, but we’re still in single figures. So while I haven’t played CTR:NF in a while now, the reason it was able to sink its claws into me so effectively was because of how much love it has for the series’ side characters.

The game has a total of 56 characters; that’s not skins or alternate versions, that’s 56 distinct characters. Four are babies, one is an original character from the game, one is a different model of a previous character, one is a ‘lost’ character that had only existed in concept art, and one is the literal wooden crate. A further three are part of a Spyro crossover, making for 45 characters if you don’t include them. I actually think they are worth discussing, and I’ll explain why a bit further down, but sure, let’s park them for now, and think about the ‘main’ 45.

Crash Bandicoot is not usually a series with big parties or squads or huge rosters. You play as Crash, and that’s it. Coco and Cortex have been playable previously, while post-CTR:NF, Tawna Bandicoot and Dingodile got in on the action in Crash Bandicoot 4: It’s About Time, but it’s a series with a thin cast. In Crash Team Racing: Nitro Fueled though, it doesn’t feel that way. Away from the handful of playable characters, there is another cluster of well known villains that the game simply wouldn’t be complete without – the likes of N.Gin, N.Tropy, Tiny Tiger, and Ripper Roo. After that though, it’s slim pickings – but the quality never drops. 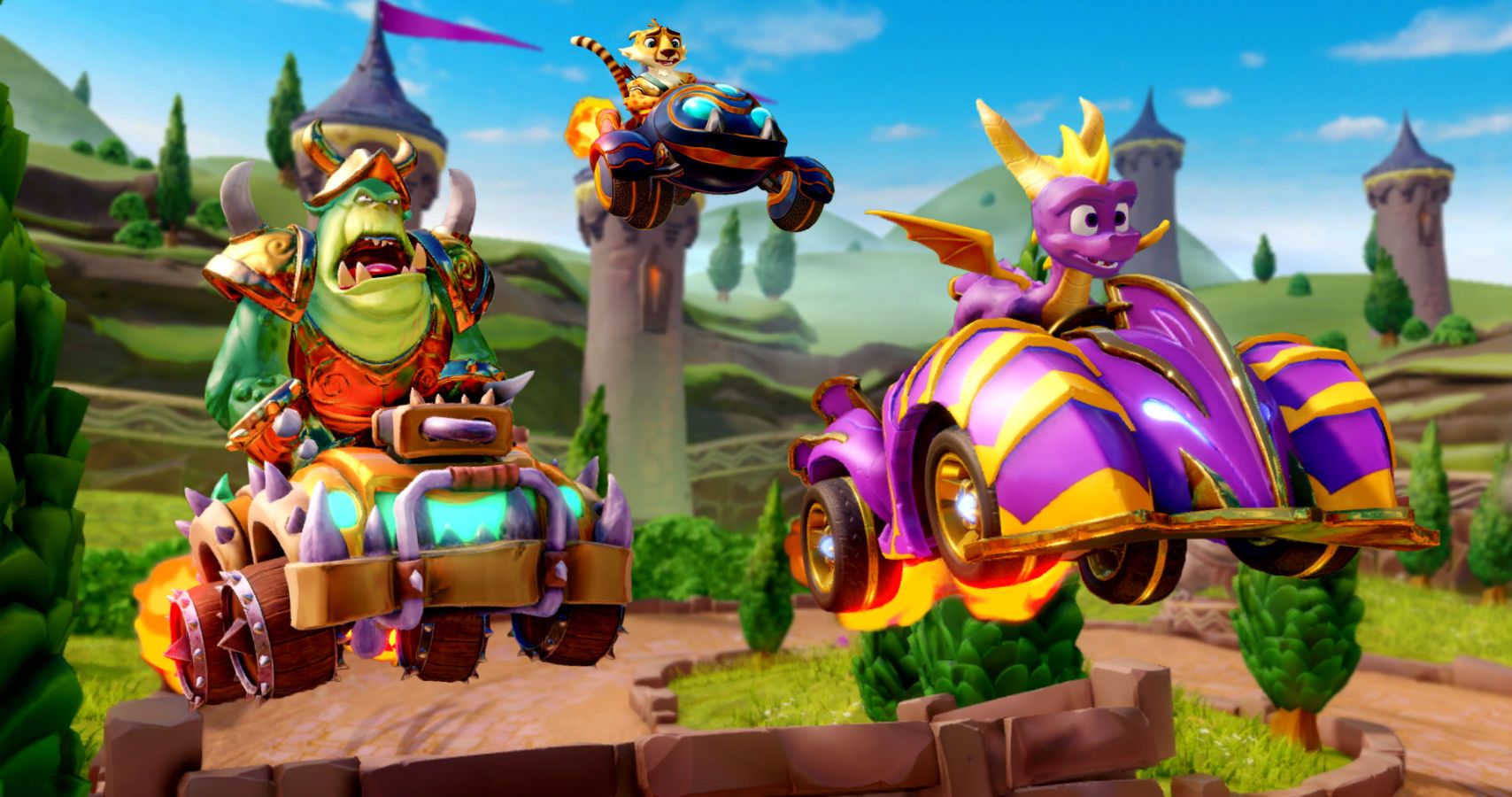 My favourite characters on the entire roster are Ami and Megumi, two of the trophy girls from the original Crash Team Racing brought back and redesigned here, this time with actual personality traits. Ami is a butch, athletic tomboy, while Megumi is a more fashionable femme. It might be fun to speculate that they were a couple were it not for the fact I’m 99 percent sure there’s fanart out there that caters to every trophy girl scenario you can imagine – and plenty you don’t want to imagine too.

For the record, the other two trophy girls are Isabella, who becomes an eastern European ice queen, and Liz, a cheeky cockney. All of them are great in their own way, but Ami and Megumi have always been my joint number one. The trophy girls are the best example of how CTR:NF does right by its side characters, too. Crash has been the franchise lead for close to 25 years, while Cortex has been the central villain for the entirety of his existence; but neither feel more developed than Ami or the rest. That’s not a criticism of Crash or Cortex; being a racing game, we don’t get much in the way of character development, and the only twists and turns are those on the circuit.

With a limited narrative that remains the same regardless of who’s in the driving seat – you can even switch drivers freely throughout the story – the characters need to rely on their charisma in order to shine. They need to tell us who they are instantly, but still make us believe there is more under the surface. That’s much harder for characters who come into the game with no pre-defined personalities, yet they come alive so effectively in Crash Team Racing: Nitro Fueled that they never feel like they’re working at a disadvantage. The same goes for the likes of Nash, Geary, and Yaya Panda, who each gel perfectly with the wider cast despite being strangers when compared to the big hitters. 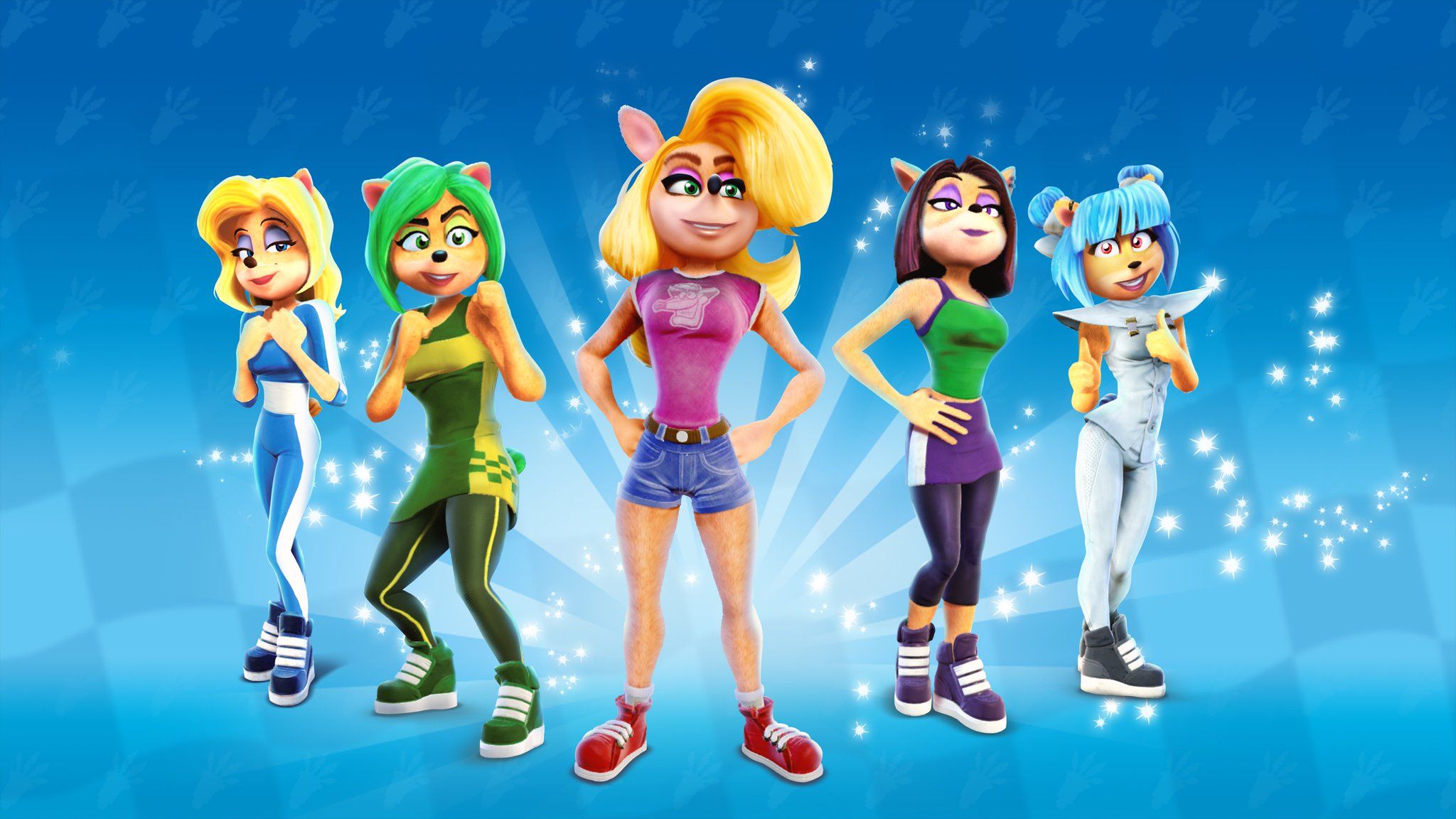 One of the best decisions the developers made was to allow ‘engine swaps’ in the game. Originally, there were four categories of driver in Crash Team Racing; Speed, Acceleration, Turn, and Balanced. The only issue is, Turn and Balanced were terrible. They were supposed to help newcomers, but they just made you slower. Sure, you went off the track less, but they were useless online and in tougher races towards the end of the main campaign. This meant half the roster was instantly unplayable, and therefore unpopular. However, once engine swap came in, every character had access to all four styles, meaning you could play whoever you wanted and still race in your own way.

This is where those ‘not quite main’ characters come back in. I actually think the OG character, Megamix, is a bit of a swing and a miss, Frankensteining the better known villains into one unholy (yet wholly uninteresting) beast. The others fare much better though. Hasty feels as though he’s been part of the gang since the jump, even though he previously only existed as a forgotten doodle deemed unfit for animation. As for the crate, it’s just funny. But it’s a gag that only works because the other characters shine. The reception could well have been that Beenox was running out of ideas, churning out whatever it felt like when the crate was released, or people memeing that the crate was more interesting than half the roster already. But because the rest of the racers were just hit after hit after hit, everyone got to be in on the joke. 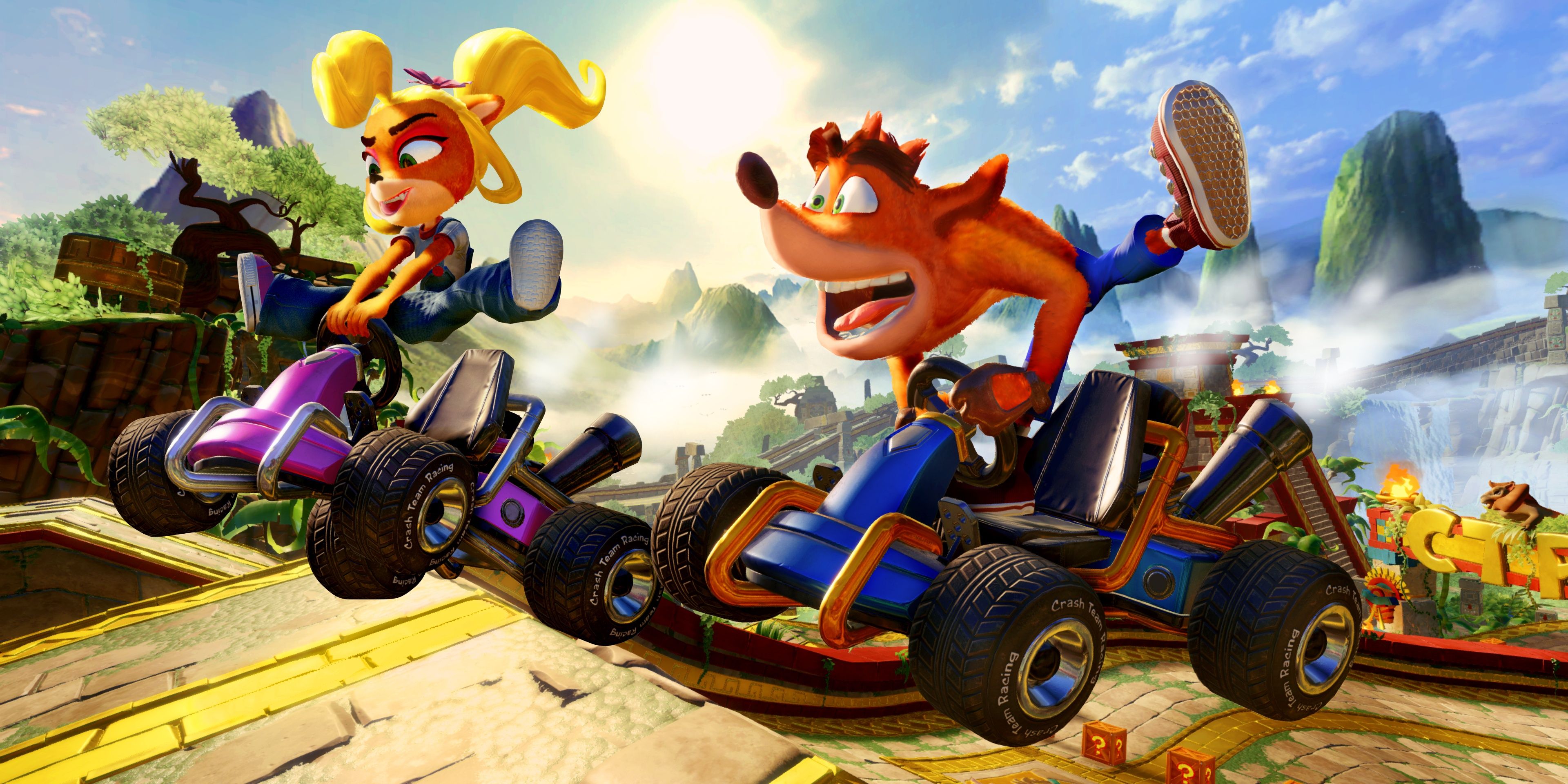 I’m not really sure what the future is for these characters. The Tawna we love from Crash 4 is from an alternate universe, but then she’s clearly taking more cues from the kick-ass CTR:NF version than her earlier damsel roles. Meanwhile, Oxide himself makes an appearance in Crash 4, ensuring the link between the racing spin-offs and the main continuity remains. I think reintroducing Zam is a bit too far, and unless we get a CTR sequel, Nitro Fueled is both the first and the last we’ll see of Hasty. But a lot of people took the trophy girls especially to heart, and it seems like their path into the main canon is a little bit more straightforward. Whenever Crash 5 comes, I hope Ami’s big bandicoot biceps are there too.

Next: When Will Gaming Have Its Promising Young Woman Moment? 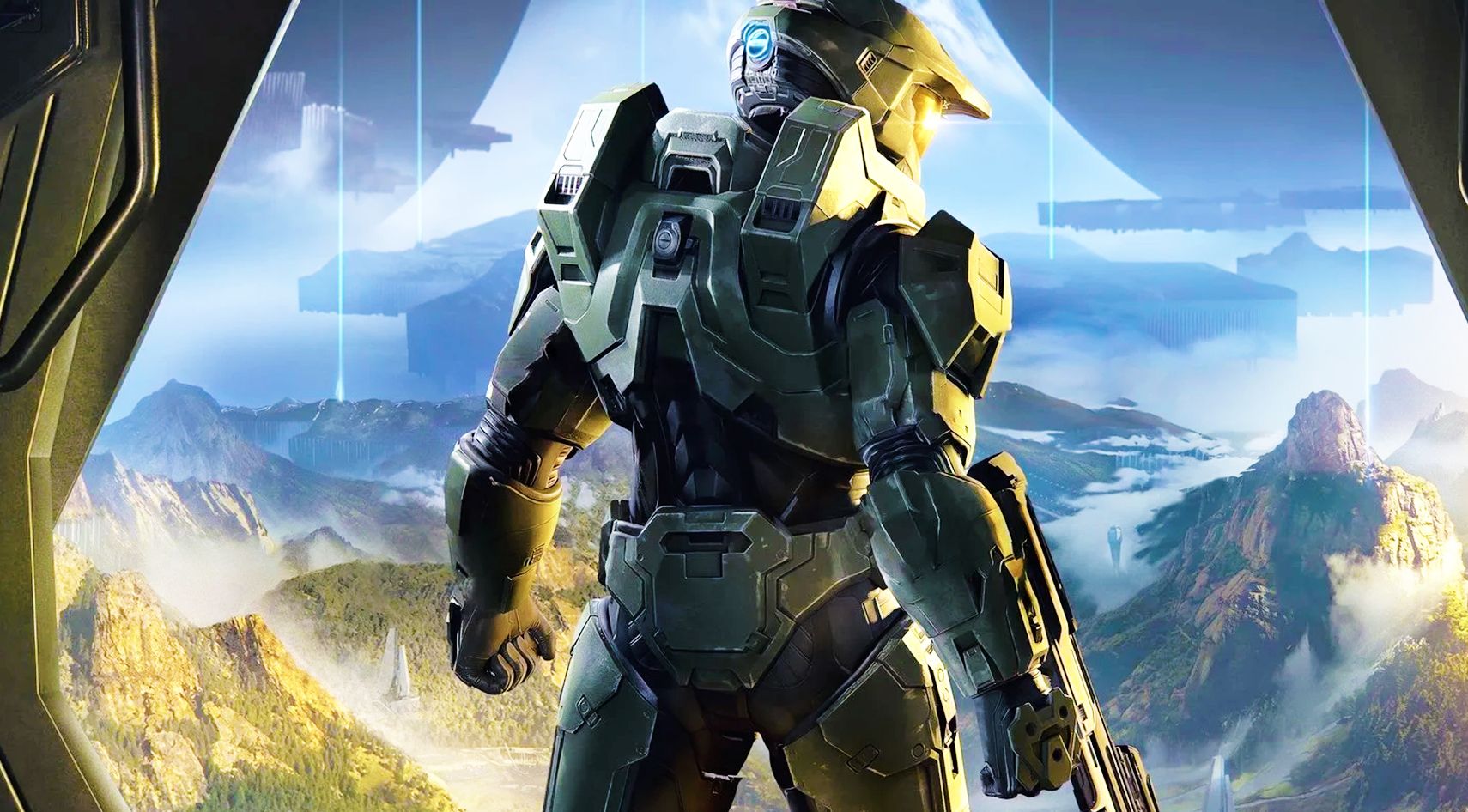