You are here:
Home / Chop Shop: How Darkest Dungeon’s Brutal Difficulty Made Me Love It Even More

Chop Shop: How Darkest Dungeon’s Brutal Difficulty Made Me Love It Even More

When newly-founded indie studio Red Hook released Darkest Dungeon in early access in 2015 following a massively successful Kickstarter campaign, it was praised by many for its inventive plot and wonderfully woeful atmosphere, but it was grilled by lots of players for a difficulty level that relied heavily on RNG and oftentimes bordered on flat-out unfair. As work on the project continued, fan reception grew to be increasingly muddled, with the addition of new mechanics and locations transforming the game into a downright grueling, nigh-on unplayable experience for some. 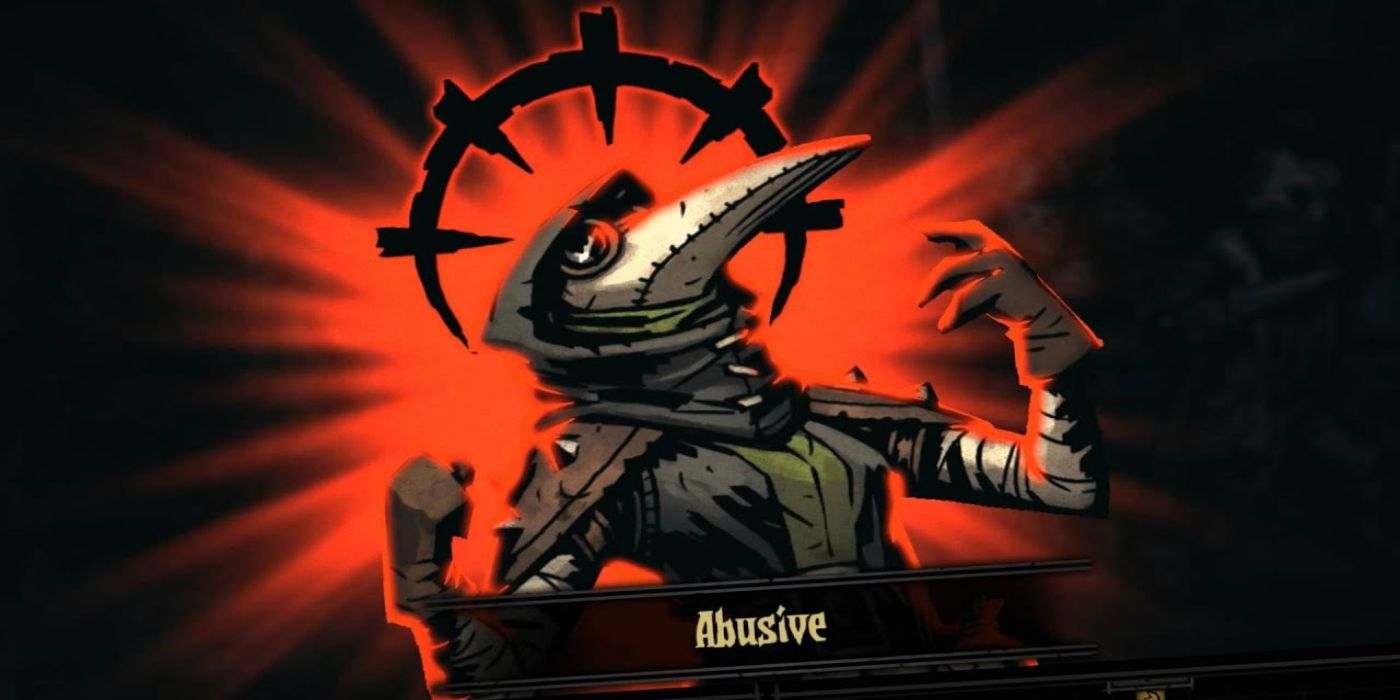 Yet, frustrating though it certainly was, Darkest Dungeon’s demanding nature and disregard for approachability made it all the more endearing. Sure, the enemy corpse mechanic was infuriating at first, and, naturally, I’ve lost dozens of heroes to the clutches of the Crimson Court or the eponymous Darkest Dungeon, but, with every painful loss or party wipe, I found myself gearing up to go at it again and to make the sacrifices necessary to ensure that my end goals could still be achieved.

Death Waits For The Slightest Lapse In Concentration 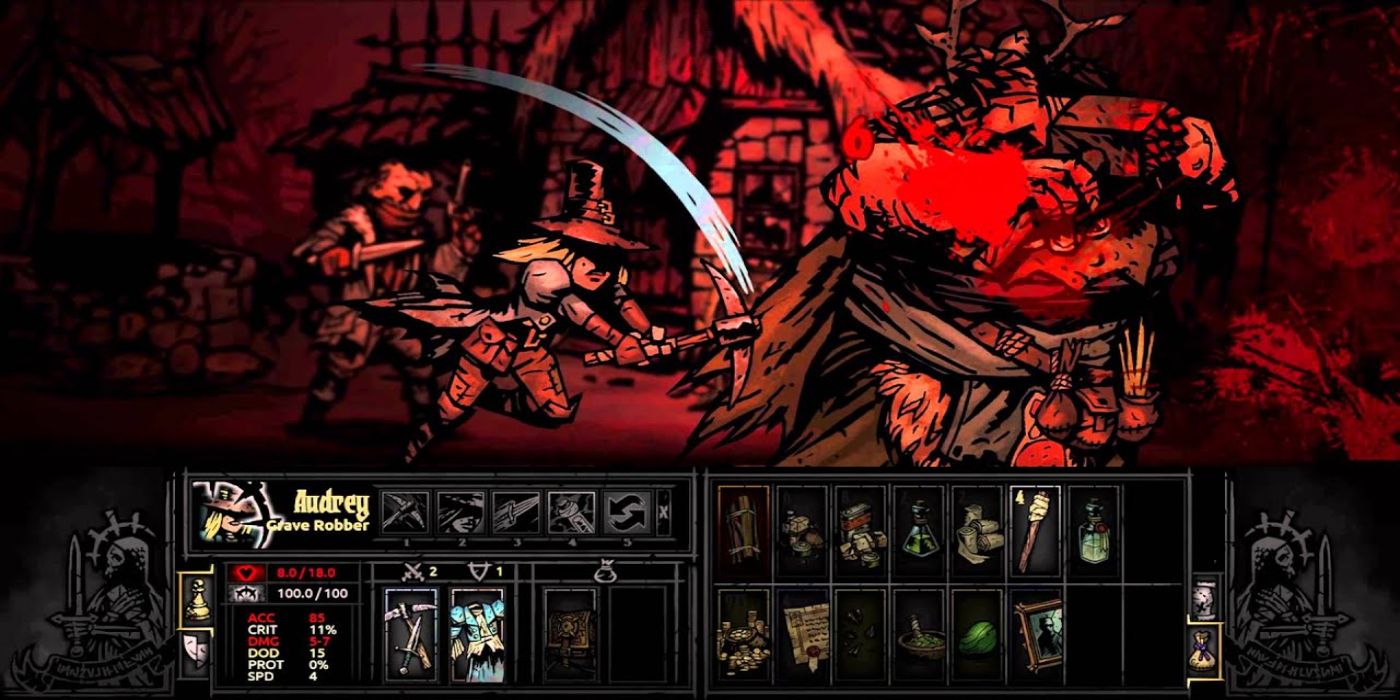 It was a sensation to which I was not all that accustomed; video games are a fairly disposable medium, and, should I be met with an insurmountable or blatantly broken challenge in a game, I typically find myself either temporarily adjusting the difficulty level or simply moving on to something else. Yet, Darkest Dungeon, much like the Dark Souls franchise to which all challenging games are now obligatorily compared, seems to dare the player to push onward.

Unlike typical titles in which death is considered a failure state, Darkest Dungeon treats death and failure as an inevitability, a setback to be overcome rather than a misstep to be avoided. Obviously, the loss of a character, particularly one in which a player has invested a lot of time and resources, can be devastating, but so much of my enjoyment of the game stems from overcoming these hurdles.

This Sprawling Estate, A Mecca Of Madness… 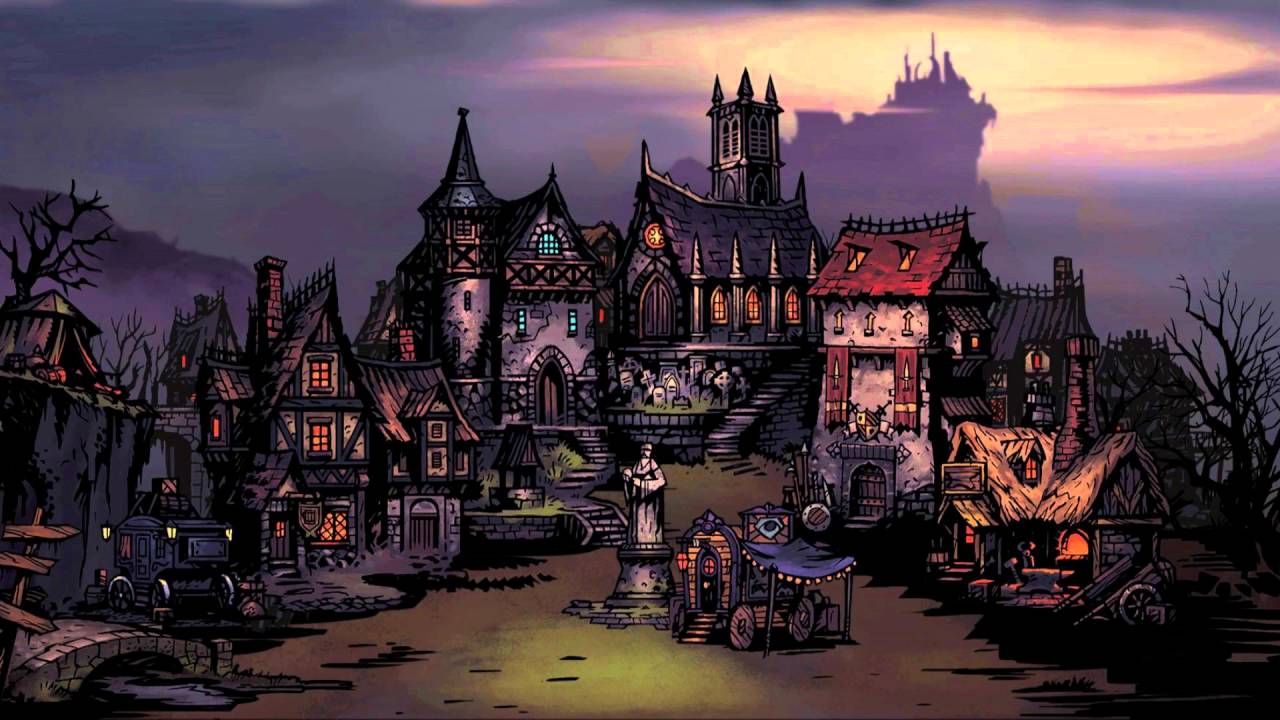 Though it bills itself as a rouge-lite RPG, Darkest Dungeon is, at its core, a grand-scale strategy game where the truly consequential decisions lie in how to plan and approach upcoming challenges and how to expend resources and manpower as opposed to deciding which enemy to strike and which buffs to apply.

Sure, the minute-to-minute gameplay is enthralling in its own right, but Darkest Dungeon truly shines when it asks players to choose between risking a party wipe to complete a mission or to decide between upgrading a hamlet structure for immediate benefits or holding out in order to build a much more worthwhile district down the line. The game more or less expects the player to think five steps ahead at all times, something tantamount to the sprawling and open-ended nature of experiences in the Sid Meier’s Civilization or Total War series.

Reeling, Gasping, Taken Over The Edge Into Madness 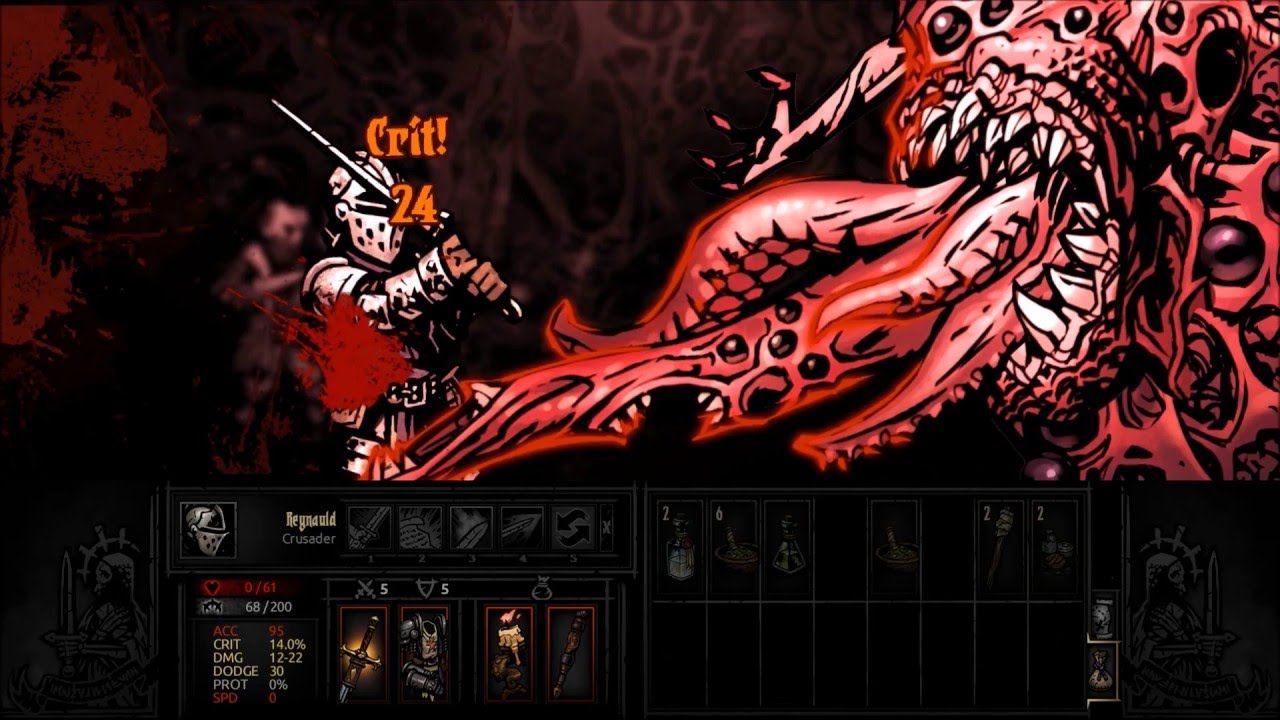 What’s more, Red Hook couldn’t have picked a more fitting mythos on which to base their game, though the studio’s name is a good indication of their subject matter of choice. Though it’s not directly based on any one work, Darkest Dungeon is perhaps one of the most true-to-source video game adaptations of the writings of H.P. Lovecraft. A controversial author famed for penning such misanthropic classics as The Call of Cthulhu and At The Mountains of Madness—the novella on which Red Hook’s next game is said to be based—Lovecraft wrote of unstoppable entities and vile, incomprehensible evils which his protagonists could never hope to face.

These themes are explored heavily throughout Darkest Dungeon, and the game’s insane difficulty, particularly in its final set of missions, evokes a sense of impossible odds and nihilistic malcontent which dominate every entry in the Lovecraft mythos. Lovecraft did not expect his characters to survive their encounters with his eldritch horrors, and Darkest Dungeon does not expect its players to emerge victorious from every excursion into its dank catacombs and half-forgotten passageways. In fact, most of the time, parties will return broken, bleeding, and driven half-mad by their experiences, and, while the seemingly endless cycle of brutish insanity may drive some players to give up on the game, it’s precisely that absurd difficulty which makes it such a successful take on Lovecraft’s work and such an exasperatingly engaging experience.

And Now, The True Test. Hold Fast, Or Expire. 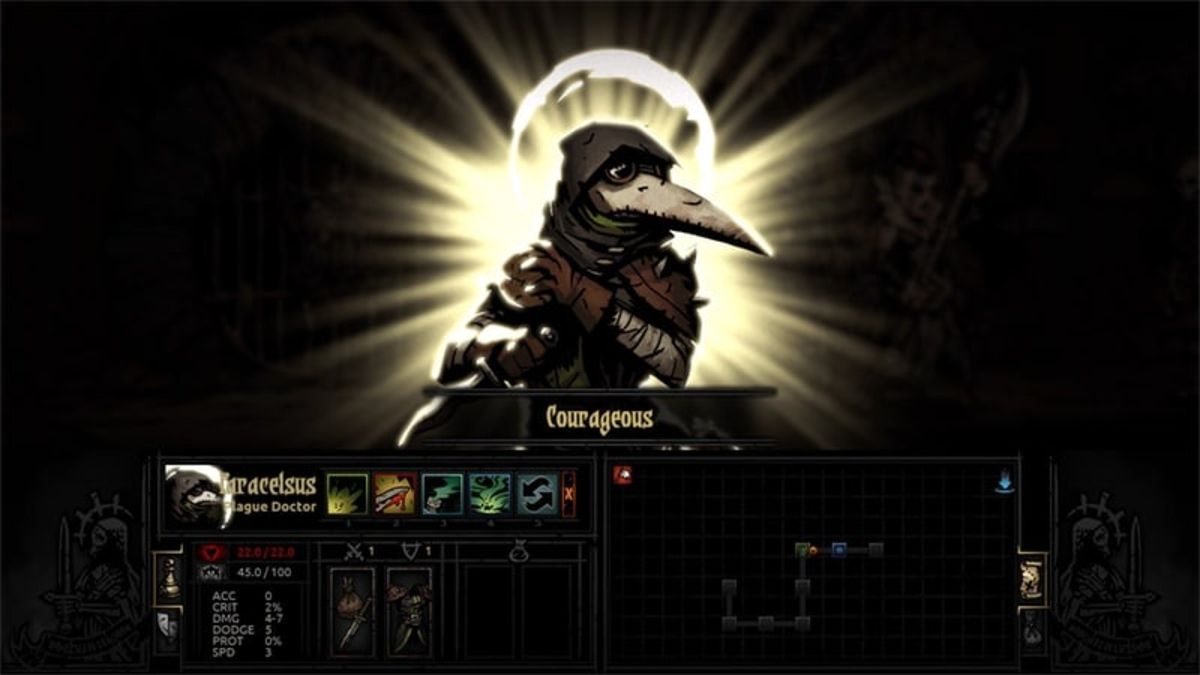 Cliché though it sounds, Darkest Dungeon evokes much of the sensations afforded to first-time Dark Souls players; the game is cruel, difficult to understand, and secretive. However, brave warriors willing to endure it are awarded a vast world hiding treasures and tales the likes of which aren’t often seen in gaming.

It certainly isn’t a game for everyone, but Darkest Dungeon’s difficulty is exactly what makes it so compelling and insanely replayable, and those who’ve given up on it in the past owe it to themselves to brave the game’s antediluvian arcades and unreasonable recesses once more.

NEXT: 10 Games To Play While You Wait For Darkest Dungeon 2 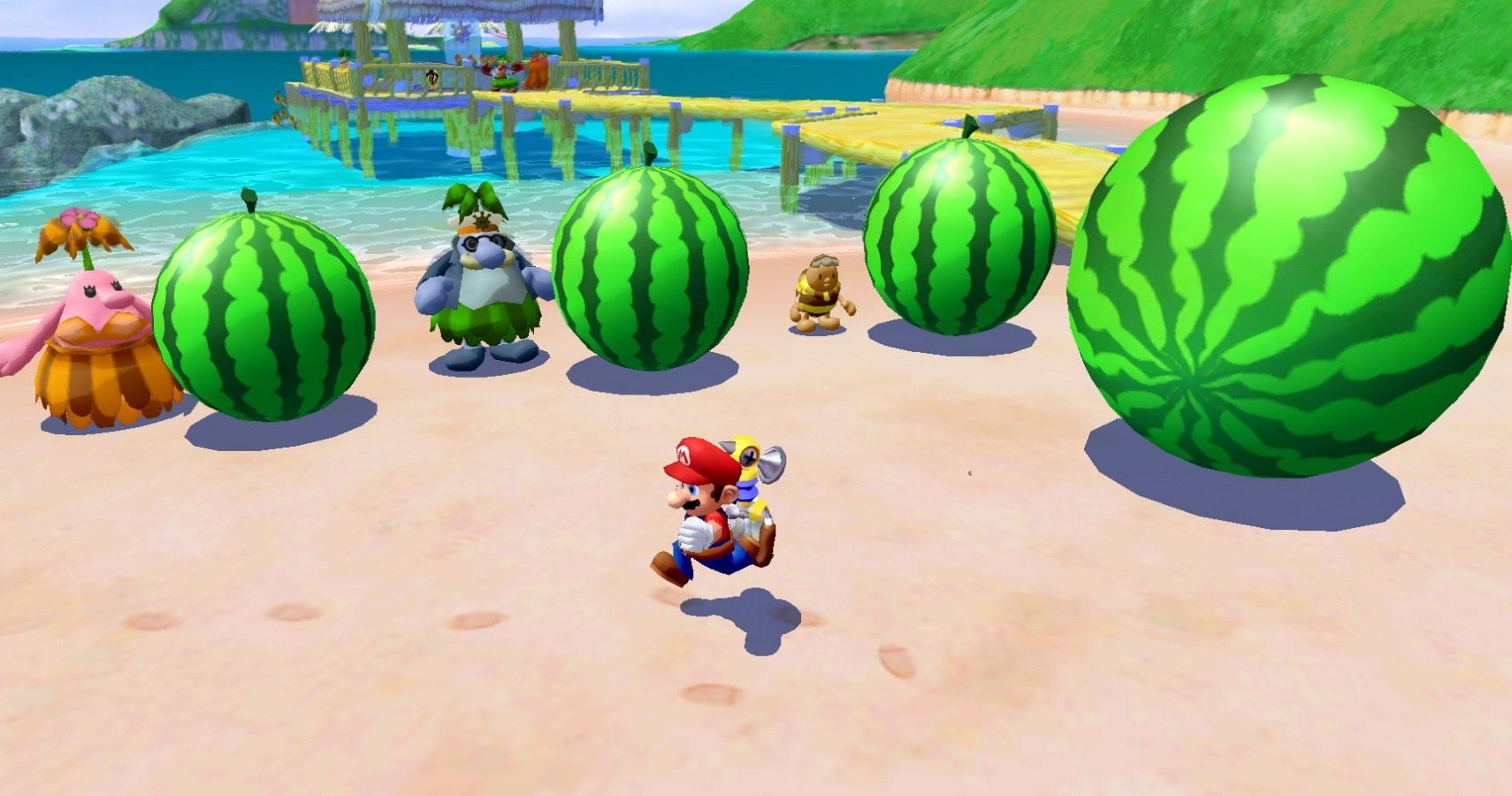