You are here:
Home / Chicory Has The Best Exploration Mechanic I’ve Ever Seen

Chicory Has The Best Exploration Mechanic I’ve Ever Seen

Chicory: A Colorful Tale is a truly phenomenal game. I expect most people who play it will have it in their top ten by the end of the year, and everyone who hasn’t played it will look at it and go “Eh? What’s a Chicory like?” I hope in the next few weeks and months it can pick up some steam and at least become an indie darling, even if it’s never going to be a blockbuster classic or even a breakout hit. It feels a bit like Umurangi Generation – they’re both very different games, but I plan on telling anyone who will listen to go and play them both. Unfortunately, not many people will listen.

I’ve already written about how Chicory handles depression and how that made me reflect on my own problems with competitiveness and drive, and how the story of Chicory – or the way it tells it – is a huge part of what makes it so memorable. But just on a raw gameplay level, Chicory deserves a lot more love because it has one of the best exploration mechanics I have ever seen.

Getting lost is a big problem in games, especially in puzzle platformers where you need to retrace your steps around the map a few times, returning to old areas with new powers to fully explore them. Chicory is a game all about colour – the colour disappears from the world and it’s your job to understand why and bring it back, all while travelling around with your magic paintbrush, decorating the colourless world. Sometimes you use this paint for narrative reasons – you’re asked to design t-shirts, donuts, and logos, for example. Sometimes, it’s part of gameplay – certain platforms are activated or deactivated when painting, and you can use paint to climb walls or fight off bosses. However, while the game never explicitly tells you to, you can also use the paint as a navigational tool. If you wander into an area and see that it has already been daubed in paint, that means you’ve been here before, which likely means you either need to find a new power to continue onwards or use a recently unlocked one to explore in a way you previously could not. 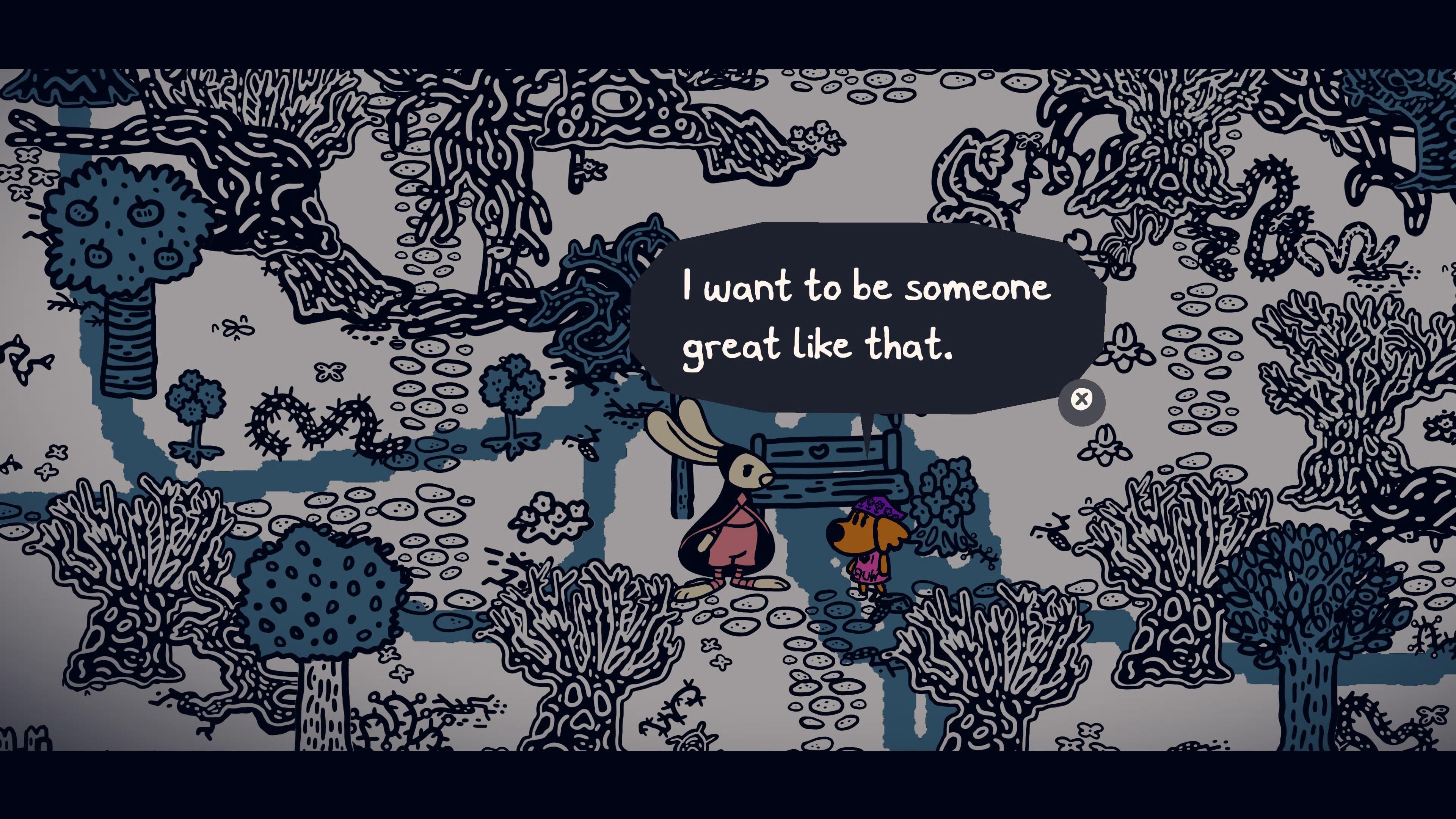 Even on a very basic level, the paint is genius. Lots of the screens in Chicory provide crossroads, where you might enter from the north but have the option to exit to either the south or the west. In those cases, I would draw an arrow going from north to south and explore onwards, knowing that if I returned to the crossroads later on, the markings would tell me which path I had already taken. It’s a simple system, but it’s genius, and with many open-world games getting bigger and bigger, it’s great to see a game instead zooming in and thinking of ways to reinvent exploration rather than adding a few hundred square miles to the map and calling that progress. There’s only one thing left to say, really – go play Chicory.