You are here:
Home / Behind Disco Elysium’s Mythical Cryptids

This entire piece is a spoiler for Disco Elysium.

If there’s anything that real-life cryptids like the Loch Ness Monster and the Yeti have in common, it’s their sheer, imposing size. These are creatures that have long captured our collective imagination—even becoming an integral part of folklore in certain cultures—because of what they represent: the monstrous unknown. The Yeti, for instance, is often described as a massive bipedal ape, whereas the Loveland Frog is said to stand around 1.2 metres tall. Even the giant squid, which is an actual, aquatic behemoth once thought to be a cryptid as well, can be as huge as 12 to 13 metres long. In fact, Bernard Heuvelmans, a researcher who’s also widely known as the father of cryptozoology, has suggested that for animals to be considered a cryptid, they should generally evoke a certain sort of emotional response; such a mythical animal should at least have a single trait that’s “truly singular, unexpected, paradoxical, striking, emotionally upsetting, and thus capable of mythification”.

Likewise, the cryptids in Disco Elysium elicit the same sort of awe and wonder, even as they’re mostly dismissed as nonsensical bullshit by your buddy cop, Kim Kitsuragi. You’ll first get to learn more about them through Lena, a kindly old lady who’s married to a cryptozoologist named Morell. An enthusiast in cryptozoology herself, she’ll tell you more about the various cryptids she has heard about, including one known as the Insulindian Phasmid. This cryptid is particularly poignant to her, because it was her purported discovery of the phasmid that brought her and her husband together. Yet her once-unshakable belief in this cryptid’s existence would come crumbling down when a subsequent quest to hunt the phasmid proved fruitless, with Lena growing sceptical and concerned if she had imagined the creature in her earlier years.

This disbelief is tangled with a sense of mysticism throughout Disco Elysium. At times, the world of Disco Elysium feels almost dreamlike, even hallucinatory. Your character, Harry, has earlier woken up in a stupor and in an amnesiac daze, completely unaware of his surroundings. He has a chorus of voices speaking to him in his head, one of which is his wildly coloured Horrific Necktie that yells at him with mostly awful advice. The city itself is surrounded by an encroaching phenomenon known as The Pale, which devours all matter and life, leaving behind only echoes and past memories. In a place that still seems to house so much mystery, it seems to make sense that cryptids are a lingering presence in the capital of Revachol, a subject that continues to enchant and mystify its people. At one point you thought you even heard the Col Do Ma Ma Daqua, an incorporeal bird with an imperceptible call. 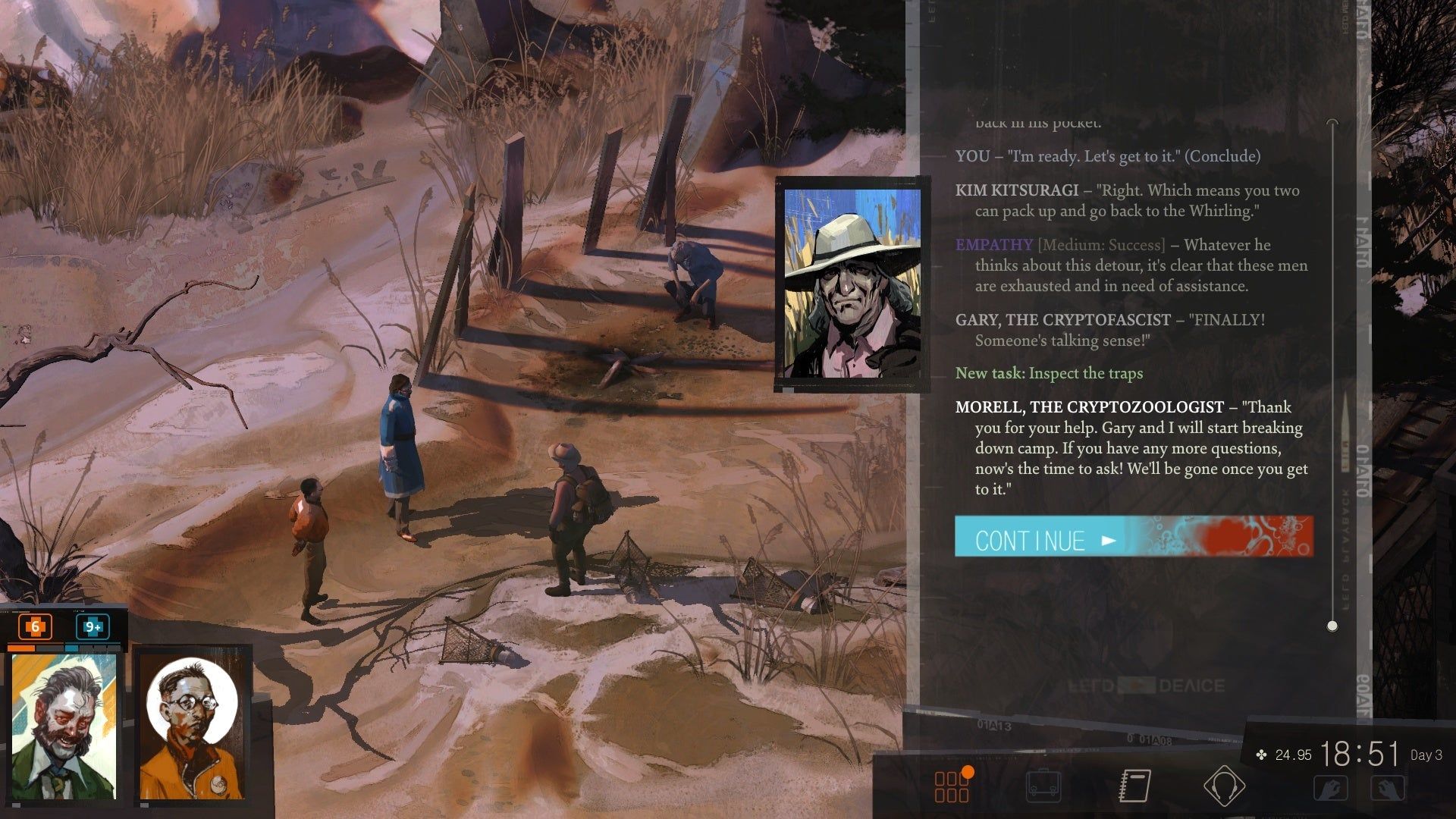 But even if most of the cryptids haven’t been proven to exist yet, at least one does: the Insulindian Phasmid. At the game’s conclusion you finally see it: it’s a massive, stick-like beast that has been hiding among the reeds. It exists, even if it can be easily missed, and it’s as real as Harry, as real as Kim, as real as Lena. It turns out that Lena and the cryptozoologists are right all along, and suddenly the nonsensical and the absurd seem to make so much sense. Cryptids are often said to be built upon exaggerated truths, but the phasmid is, in fact, even bigger than what the cryptozoologists expected. Even Jean, your previous clinically depressed partner you’ve cleanly forgotten about, was so in awe of the picture of the phasmid you took, that it swept away his sadness temporarily. Thus the presence of the cryptids leaves an otherworldly tinge to Disco Elysium’s hardboiled detective fiction, deftly erasing the line between the absurd and the sensible.

In real life, folkloric cryptids will always exist, perhaps as a projection of our primal fears—our reptilian brains—of the unknown. But among the denizens of Revachol, the cryptozoologists, and even Harry, the cryptids become a source of quiet comfort and wonder, even a routine for Harry, if you decided to painstakingly go through all the traps meant for the phasmid in one quest. Just as the game has twisted the meaning of the truth behind its case, the cryptids have also turned the meaning of the mystique on its head. They have become far more than just unknowable or legendary beasts; they’re now part of Disco Elysium’s natural, substantial world.