You are here:
Home / 12 tips to make Microsoft Flight Simulator much easier

Microsoft Flight Simulator is an incredibly dense piece of software. I hesitate to even call it a game, because it really does require that players know their way around an airplane. But there are a few ways to make the experience easier for yourself, especially if you’re just starting out.

In this Microsoft Flight Simulator guide, we’ve assembled 12 tips and hidden features that will help you get the most out of your first hours with the game.

My initial instinct with Flight Simulator was to start my first play session already on the runway, staring down the centerline and ready for takeoff. But getting a plane into the air can be intimidating, especially if you don’t know how it handles. So I recommend starting your first few flights already in the air.

To start mid-air, click anywhere on the World Map besides an airport and select click “set as departure.” That will begin your journey about 1,500 feet high, already at a safe cruising speed.

Once you get a handle for how your controls operate — including pitch, yaw, roll, and throttle — it’s time to dive into the Flight Training tutorial. Feel free to do the first five modules at your own pace, but stop short of lesson six — your first solo flight. It’s a bit hinky and requires more precision than you’re probably capable of right now.

Some of Microsoft Flight Simulator’s best features don’t work unless you’ve first created a flight plan. So, now that you know how to take off and land, it’s time to pick a few airports and start doing laps.

From the World Map, select both a Departure and an Arrival airport on the world map and get to work. Just make sure they’re relatively close together at first.

With a flight plan locked in, know that Flight Simulator defaults to placing you on a runway ready to take off. But, to get the full experience, think about starting at a gate or in a parking space. You can access that option via the drop down menus directly below the Departure and Arrival airports on the World Map.

Beginning and ending a trip by taxiing on and off the runway can really add to the immersion of role-playing a pilot, but actually finding your way around the tarmac can be a pain. That’s why I lean on the built-in Assistance features to help me out. From the Welcome screen, hit the Options tab at the top. Then select the Assistance menu, select the drop down carrot to the left of Navigation Aids, and turn the Taxi Ribbon option on. You can also get there from a similar Assistance menu on the Pause screen once you start flying.

For the taxi ribbon to appear — and actually guide you out to your assigned runway — you’ll need to communicate with air traffic control (ATC). To do that, open up the ATC interface (available on the quick-access menu at the top of the screen) and request pushback, clearance to taxi, permission to take off “straight-out,” or whatever combination of the previous gets you assigned to a runway. Just don’t forget to acknowledge the tower when you do finally get clearance.

Use a virtual copilot and waypoint assistance

Alternately, you could ask your virtual copilot to work the radio while you worry about driving.

Up on the quick-access menu, you’ll find an icon shaped like a pilot’s head. Clicking on it will open a menu. Toggle the Manage Radio Comms option to turn on your copilot. Now when you approach your destination, they’ll radio in to get you clearance to land. You can even give them control of the plane if you need to step away for a few minutes.

Once you reach your destination airport, Microsoft Flight Simulator assumes that you know which runway is which. That’s especially challenging at larger airports with multiple, intersecting landing strips. If you need help getting your bearings, head to the pause menu, hit the Assistance tab, and play with the settings inside the drop down to the left of the Navigation tab again to dial things in to your liking.

Route & Waypoints will give you floating markers in the sky to follow all along your flight path. Landing Path will even direct you down to the right runway, helping you get onto the right glide path for final approach.

Condense long trips with Travel To

Another handy feature for longer flights works a lot like time-lapse, yet it’s actually much more elegant. And only works if you have a flight plan dialed in.

Up along the quick-access menu again, you find an icon that looks like a little teardrop-shaped map pin. This is the Travel To tab. It doesn’t move you from place to place so much as it moves you between the different phases of your flight plan, skipping from Takeoff or Cruise to Approach or Final. Using this feature is a great way to condense a cross-country trip into a cool 30 minutes.

In the promotional videos for Microsoft Flight Simulator, developers showed off a bush plane flying next to a flock of flamingos. They’re definitely in the game, along with grizzly bears, elephants, and more. But there’s very little chance you’ll find them on your own.

On the World Map, type in “fauna” in the search bar on the left side, and that’ll dial up a list of where you can find animals in Microsoft Flight Simulator.

When you’re in the air, head to the pause menu once again and hit the Assistance tab. There, under the drop down Navigational menu, toggle on the option for “Fauna Markers.” Now your giraffes or seagulls or whatever you came in search of will be much easier to locate.

Use Active Pause for pretty screenshots

Another handy feature in Microsoft Flight Simulator is called Active Pause. With it you can stop your plane mid-air and change everything from the time of day to the kind of weather that you’re flying in. It’s also a great way to get screenshots.

You’ll find Active Pause under the pause menu, behind the Controls tab and the Menu drop down, where it defaults to the Pause button on a full-size keyboard. You can assign it to any button you like. Just be careful when using it at low speeds or at low altitudes, as it has a tendency to send you into a nasty stall once you resume flight.

With TrackIr you can actually stick your head out the window.
Image: Asobo Studio/Xbox Game Studios via Polygon

The cockpits in Flight Simulator can be very claustrophobic, but they’re actually packed with useful dials and functioning switches. Use the scroll wheel on your mouse to get a wider view, or purchase TrackIr … which gives you a neck.

TrackIr uses the same kind of infrared technology that made the Wii motion controllers so fun to use. You attach an emitter to your headset and a receiver to the top of your monitor. Using the calibration software, you can then translate tiny movements of your real head into big movements of your pilot’s head in-game. 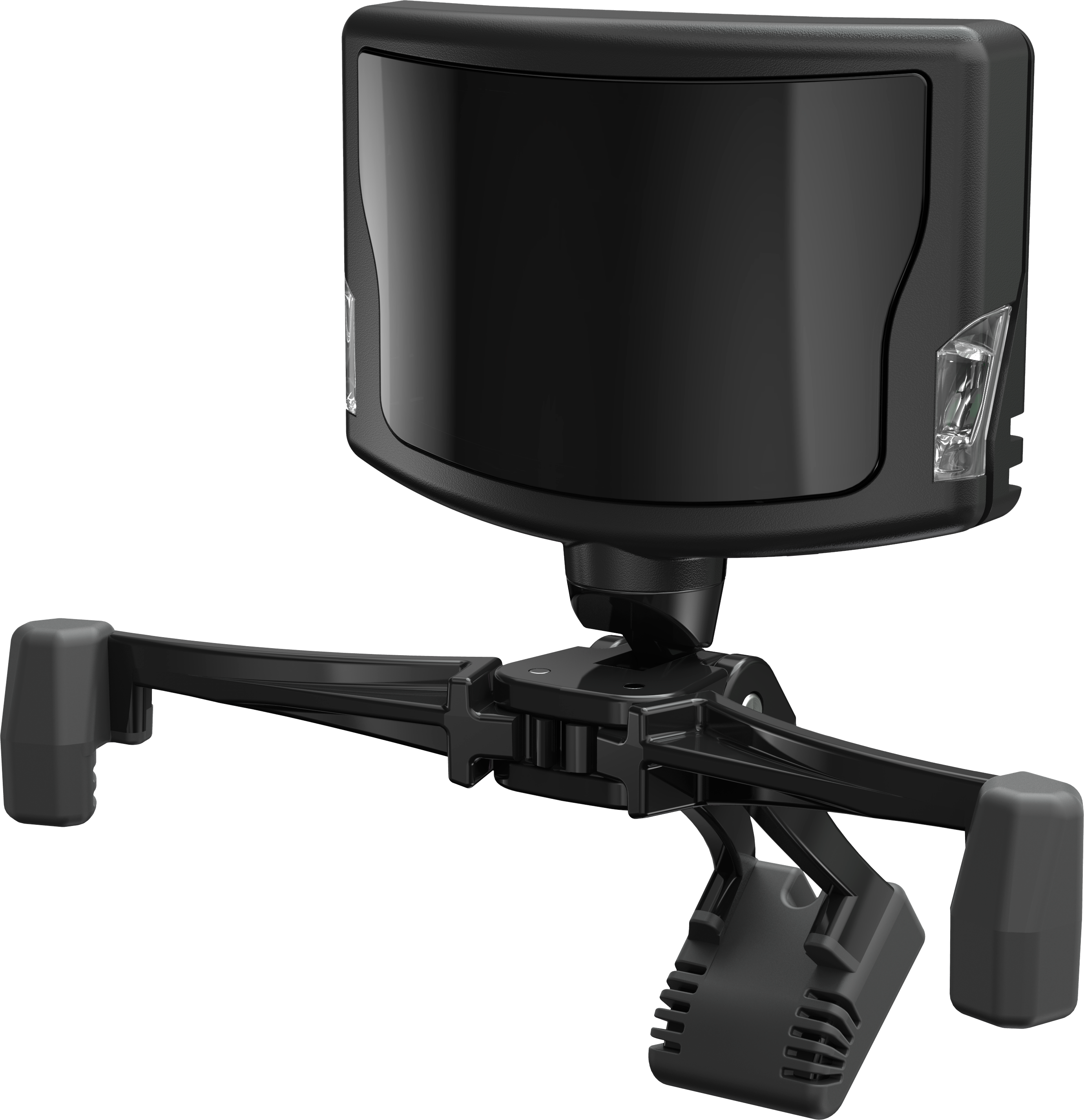 With TrackIr in Microsoft Flight Simulator, you can lean forward to see over the nose during landings, bend down to get a close look at your altitude and heading, and even put your head outside the plane entirely to get a better look at the scenery.

Flying in multiplayer is a lot of fun, but tiny planes and huge distances can make it difficult to locate one another in-game. To make things easier on yourself go to the General tab of the Options menu and hit the Traffic button. Once there, turn on the setting marked Show Traffic Nameplates. In big friendly letters above their airplane in-game, that will list the gamertag and the altitude of the friends you’re flying with.

How to land an airliner

Microsoft Flight Simulator only comes with a tutorial that teaches you how to land a single plane — the ubiquitous Cessna 152. But the base game itself comes packed with dozens of different airplanes. So how do you learn to land an airliner without your Google search history getting you on an FBI watch list? With a feature called Landing Path. You’ll find it once again in the pause menu, under the Assistance tab, in the Navigation menu.

To practice landing a jumbo jet, choose a Departure and an Arrival airport that are about the right size. Chicago’s O’Hare and Midway airports fit the bill. Also, since they’re relatively close together, your load times will be a bit faster since you have less environmental data to pull in from the cloud when you use the Travel To feature.

Once in-game, just open up the Travel To tab again to move yourself to the Approach or Final phase of your flight plan. As you close with the airport, Flight Simulator will put up a series of glowing brackets to help guide you in.

The World Map in Microsoft Flight Simulator is pretty bland, with a single muted gray color to represent the landmasses all over the world. You can switch that instead to a satellite overlay. It’s low resolution, but it will give you a bit more visual information when you’re trying to land in specific parts of larger areas. Maybe you’re just trying to find your house, or maybe you want to view a certain section of the Nile River delta or the Grand Canyon.

To turn it on, go to the World Map, select Open Filters from the bottom of the screen, and toggle the Background Map from IFR to Satellite.

Finally, once you get comfortable with all of the game’s various features like ATC, navigational information, and GPS maps, you’ll need to have more than one window open on your screen at one time. For some, that means shrinking down the game into a windowed mode on a larger screen. Additionally, Microsoft Flight Simulator natively supports multi-monitor setups.

To pop-out these pop-up menus, just hit the middle button in the upper right corner of the window — the one with the arrow pointing up and to the right. Once you do you’ll be able to drag the window anywhere on your desktop.