You are here:
Home / This simple joystick reveals the complexity inside the new Microsoft Flight Simulator

Every time screenshots show up for the new version of Microsoft Flight Simulator, jaws begin to drop. Not just flight simulation nerds, mind you. Just about everyone seems to have noticed that Asobo Studio has something special on its hands. The developer’s Bing-powered technology maps photographs and satellite images directly into the game world. The clouds and weather systems are also stunning.

The general public, on the other hand, hasn’t been as excited about the cockpits. Here’s why you should be paying attention to all those knobs and dials.

Last week the team at Thrustmaster unveiled its newest offering, the TCA Sidestick Airbus Edition. The official description is fairly pedestrian. It’s a big hunk of plastic modeled after the actual control stick used to fly the Airbus A320. Big deal, I thought.

Then I Googled the Airbus A320, and my jaw dropped.

You can look all around the full A320 cockpit on the Airbus website.
Photo: Master Films/Airbus

The yoke is the big, two-handed control surface that looks like a steering wheel. Airplane manufacturers have been putting those inside airliners ever since airliners became a thing. But you don’t need one on an A320. You fly the big, 200-person airliner with a tiny little sidestick — just like you’d fly a fighter plane. That leaves more room for the full QWERTY keyboard that you can pull right out from below the instrument panel.

The A320 has one of the most sophisticated avionics packages in the world. With multiple multi-function display panels, pilots refer to it as a fully “glass” cockpit. And the Flight Simulator team plans to simulate the entire thing inside their video game… which they’re building to be compatible with a video game console, mind you.

If you don’t believe me, here’s a representative at Asobo casually flying his A320 out of Vancouver.

Taken in context, this new flight stick is actually the icing on the cake for what’s promising to be a very exciting new simulation game.

Thrustmaster tells Polygon that it worked directly with Microsoft and Airbus for about two years to make sure that the stick was both compatible and authentic. They even included alternate left and right buttons that can be swapped out with a screwdriver. That’s because the pilot and the copilot’s sticks are mirror opposites of one another. If you really want to fly the A320 like the pros do, you’re going to have to learn to fly with your left hand.

This new flight stick isn’t just a licensed peripheral. It’s a valuable part of the Airbus flight simulation experience inside Flight Simulator. It’s also a boon to anyone who plays Star Citizen or MechWarrior 5: Mercenaries with a dual-stick layout.

The new Thrustmaster TCA Sidestick Airbus Edition goes on sale today for $69.99 on the official Microsoft storefront. It’s only compatible with Windows PC, but the team tells me they have more announcements on the way later this year. You can take a look at the entire Airbus-themed product line at the official website, which also includes a matching throttle quadrant. 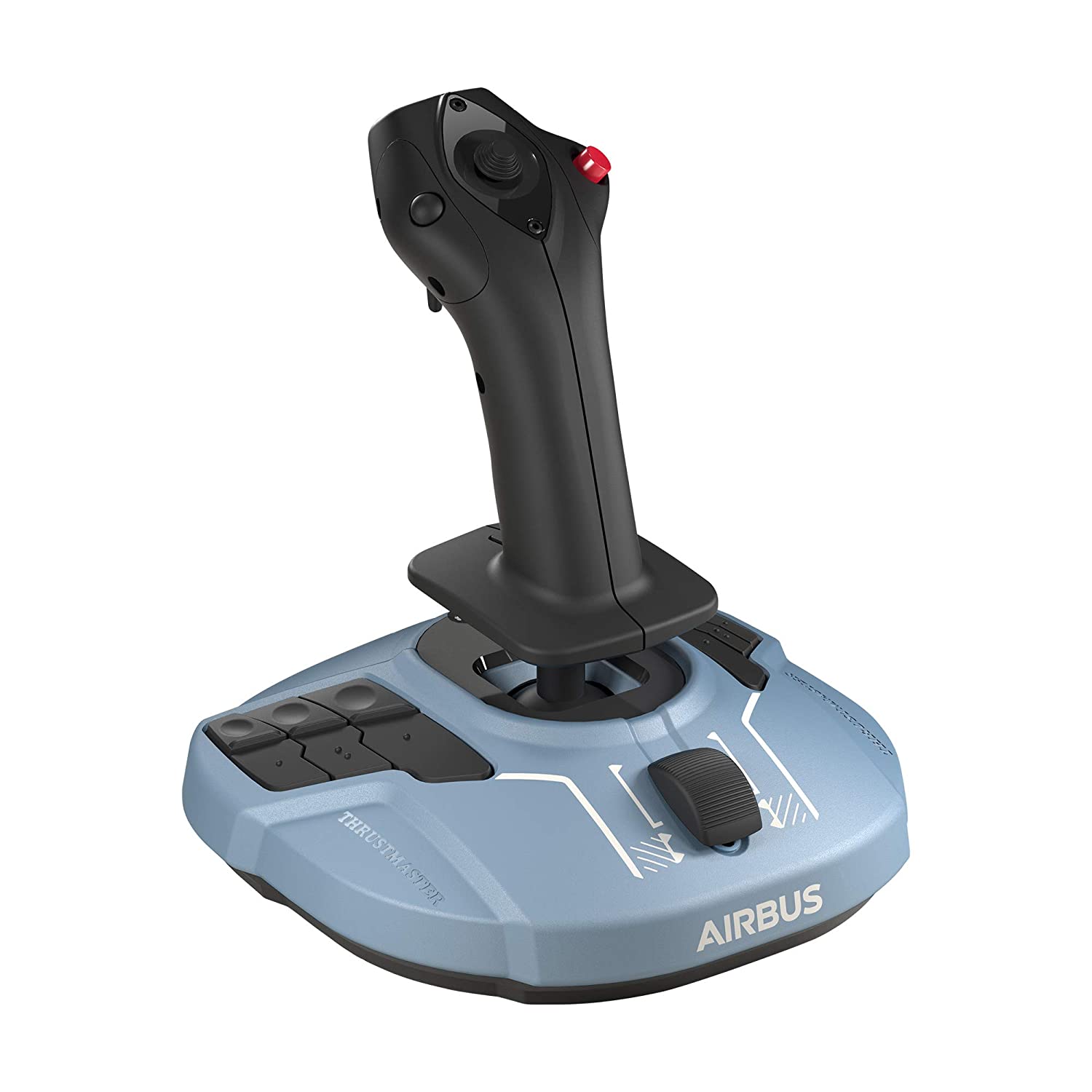