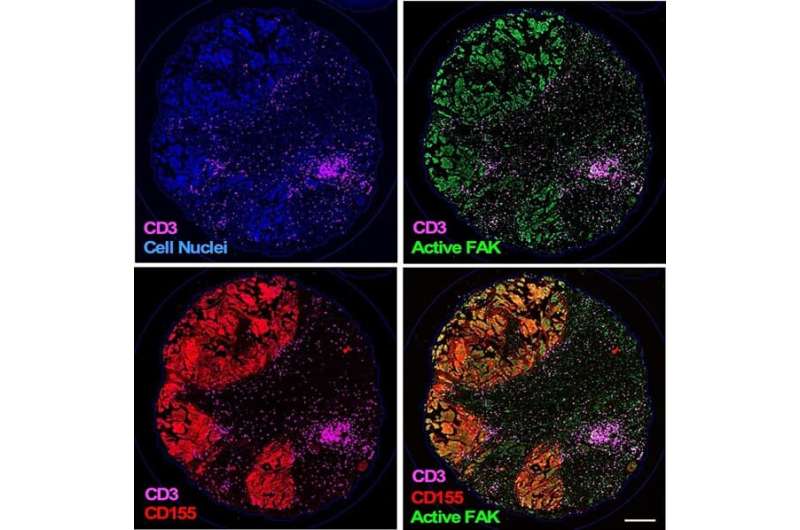 The findings will publish in the April 11, 2022 online issue of PNAS.

Ovarian cancer is the fifth leading cause of cancer deaths among women and the majority of these cases are high-grade serous ovarian cancer (HGSOC) tumors, according to the American Cancer Society.

HGSOC is lethal in part because it is often resistant to chemotherapy. Immunotherapy, a therapeutic approach that uses a person’s immune system to fight disease, has been promising in many cancers, but approaches to use immunotherapy have not yet shown success in HGSOC.

One approach to immunotherapy targets proteins called checkpoint receptors that act as brakes on immune system activation. Inhibitors of checkpoint receptors release this brake, allowing the immune system to attack cancer cells. However, for immunotherapy to work effectively against HGSOC, treatments need to also disable the protective environment created by the cancer cells.

In the study led by Duygu Ozmadenci, Ph.D., postdoc scholar, and senior author David D. Schlaepfer, Ph.D., professor in the Department of Obstetrics, Gynecology and Reproductive Sciences at UC San Diego School of Medicine, they provide new insights into the molecular details of tumor and immune cell communication and resulting dysfunction in HGSOC.

“Ovarian cancer is one of oncology’s greatest challenges,” Schlaepfer said. “Tumors can develop without obvious symptoms. The most common sign of ovarian cancer is abdominal swelling when the disease is advanced, which is when most women are diagnosed.”

Ozmadenci and colleagues found that activation of a key signaling protein within tumors called focal adhesion kinase (FAK) regulated expression of a protein called CD155 that binds to the checkpoint receptor called TIGIT on immune cells. In effect, the tumor is building a safe environment for the cancer cells to grow and evade immune detection in part by maintaining high levels of CD155 as a shield against immune attack.

In a preclinical model of aggressive ovarian cancer, the researchers found that an oral anti-FAK drug reduced CD155 and other checkpoint proteins. When used together with an immunotherapy blocking TIGIT, an elevated immune response was observed against the ovarian cancer cells. This, in turn resulted in smaller tumors and longer survival.