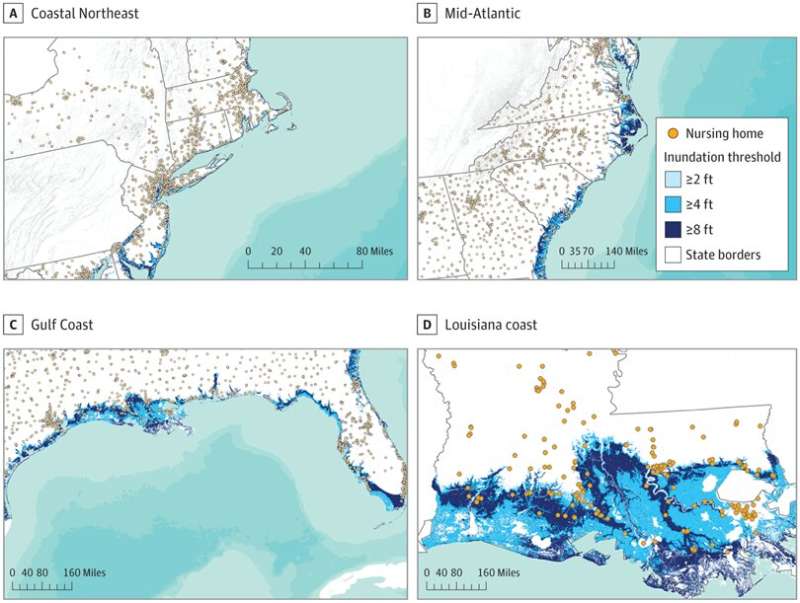 One in 10 nursing homes in U.S. coastal regions is at risk of exposure to severe hurricane-related flooding. But while nursing home residents are disproportionately more susceptible than the general population to injury and death due to environmental disasters, a significant number of at-risk facilities may be inadequately prepared for hurricane-related inundation in certain coastal regions, a new Yale study finds.

The team, led by Natalia Festa, MD, research fellow with the National Clinician Scholars Program and Yale Program on Aging, used publicly-available data from the Centers for Medicare & Medicaid Services (CMS) to study the relationship between local exposure risk to hurricanes and emergency preparedness across nursing homes in various coastal regions. They found that preparedness differed considerably, highlighting the need for standardized emergency measures that protect all vulnerable, at-risk residents. The team published its findings in JAMA Network Open on January 6.

“This project is at the intersection of medicine and climate,” says Kaitlin Throgmorton, data librarian for the health sciences at Cushing/Whitney Medical Library and collaborator on the study. “We’re trying to understand how nursing homes are responding to various climate threats through using fully open data.”

Smaller-scale studies have suggested a lack of emergency preparedness. The team hoped to better understand the correlation between potential inundation from hurricanes and preparedness at a large geographic scale using a sample of nearly 6,000 nursing homes along the Atlantic and Gulf coasts. They geocoded the homes and evaluated facility characteristics as well as exposure risk to potential hurricane-related inundation using maps data from the National Hurricane Center. Then, they used the data to see if exposed nursing homes were likelier to have stronger preparedness.

The study found that approximately 10% of those sampled were at risk of experiencing hurricane-related inundation, and about 30% also had a critical emergency preparedness deficiency. While at-risk facilities on the western Gulf Coast were more likely to have stronger preparedness, to the team’s surprise, this correlation did not exist in other regions. In the mid-Atlantic region, they observed a higher prevalence of emergency preparedness deficiencies among at-risk facilities.

“In our analysis, we found that nursing homes in the western Gulf Coast seem to be responsive to local environmental risks,” says Festa. “But in other regions, that does not seem to be the case.”

The team believes that the western Gulf Coast may be better prepared due to regulatory reforms following Hurricane Katrina, and that these facilities could potentially serve as an exemplar of emergency preparedness for at-risk nursing homes in other parts of the country. “But there is additional research that’s needed to understand the mechanisms underlying the patterns that we observed,” Festa adds.

Furthermore, the study shows how fully open data can be used to learn more about health care facilities’ preparedness for environmental hazards. “We’ve been able to promote open data work and also show the impact of what we can learn and what we can advise on from a policy perspective,” says Throgmorton.