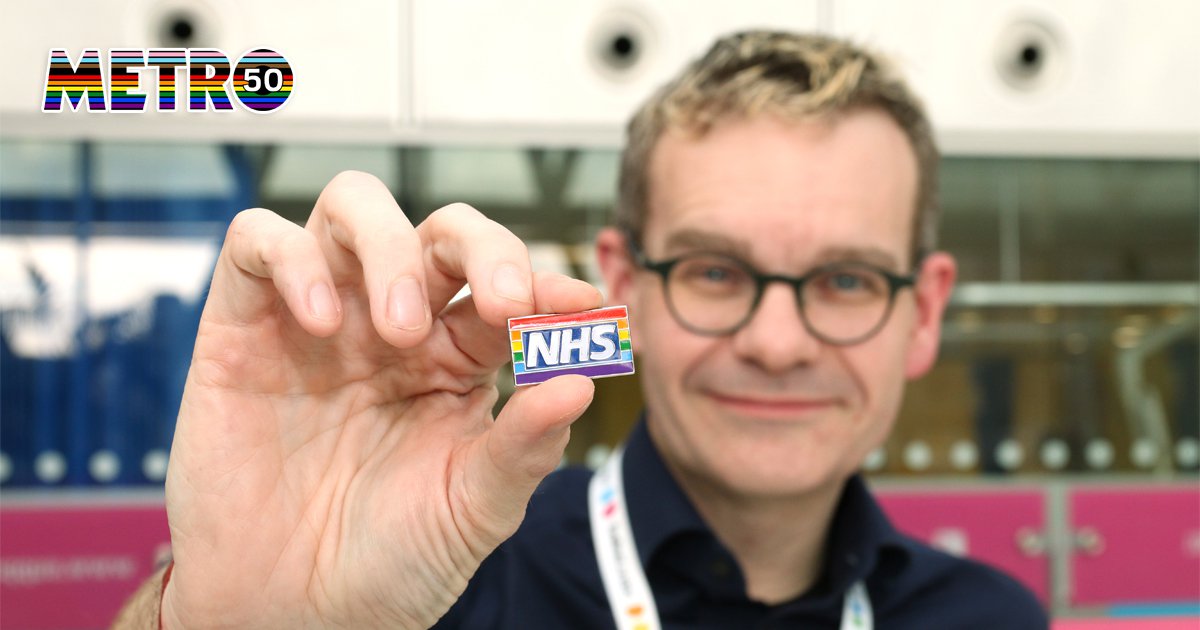 A note from the guest editor

There are many things that the NHS can be proud of, but near the top of that list has to be the Rainbow Badge Project.

The beautiful brainchild of my friend and colleague, Dr. Mike, at the Evelina London children’s hospital, this spark of queer genius set off a culture shift across the country and beyond.

I still remember the day Mike messaged me to say he had an idea and wondered if I was keen to help him get it off the ground. My answer? An unequivocal yes! I’m so glad (and proud) that it has taken off and gone from strength to strength. We need more Dr. Mikes in the NHS, and in the world.

When Dr Michael Farquhar was 14, he made up an excuse to see his family doctor.

He wasn’t ill; he just wanted a safe place to discuss his sexuality. He had known he was gay since he was in primary school, but didn’t know how to tell his family.

‘I said to the GP: “I think I’m gay”, clip art sports medicine Michael recalls. ‘And he replied: “Oh, I’m sure you’ll grow out of it. And don’t worry; I won’t tell your grandfather when we play golf this evening.”

‘Well, that was me back in the closet.’

Michael didn’t then come out until he was in his mid-thirties.

‘It feels very isolating,’ he explains. ‘If you feel you can’t tell people who you are. It is not a healthy way to try and live.’

It was this experience of a healthcare professional’s lack of understanding and compassion, that eventually drove Michael to make a change that would help stop other children from feeling the way he once did.

While working as a consultant in paediatric sleep medicine at the Evelina London Children’s Hospital, he knew he didn’t want young people to have to feel secretive or ashamed about their sexuality anymore.

So with colleagues, he designed an LGBTQ+ rainbow badge that is now worn by hundreds of thousands of doctors, nurses and other NHS workers up and down the country.

‘I would hope that if someone is wearing the badge, for a kid – like I was – that young person would feel able to have that conversation, and be met with empathy, understanding and support,’ says Michael. ‘Not the kind of brush-off dismissal that I got. My own experiences shaped why I think this is important.

‘The idea came from a semi-drunken conversation in 2018 with a group of friends about the importance of symbols and representations, and to see support in that way. I wear quite a lot of pins, and I said “wouldn’t it be great to have a pin with a rainbow on it”, and we just assumed it would already exist. But it didn’t.’

After that discussion, Michael forgot about the idea for a few months. Then one day, after a very bad shift, when he was in a terrible mood, he decided to fix it by doing something good.

So he got friends in graphic design to put the NHS logo in front of the rainbow, contacted a badge company, and got 100 pins made. He then handed them out to colleagues and contacts and the idea caught.

‘Even with just those 100 people wearing them, very quickly we started to get comments back from people saying that they were having conversations with people about LGBT+ issues that they had never had before,’ remembers Michael.

‘The idea is that if you see a person wearing the badge, then hopefully that identifies them as someone that you can feel confident talking to about issues of sexuality and gender identity, and know that they are going to have a little bit of knowledge to be able to understand where you’re coming from.’

However, with the badge comes great responsibility, as if a member of staff wants to wear one, they must first sign a pledge promising to be an ally.

They are also told that by choosing to wear the badge, they are sending a message that ‘you can talk to me’ about issues of gender and sexuality. And, while they aren’t expected to solve all issues and concerns, they do need to be a a friendly ear and know how to direct those they speak with to support available.

It’s an important aspect of the campaign, explains Michael: ‘If someone was wearing one of these badges just because it looks pretty, and then an LGBT+ person approaches them for help and they’re dismissive – then actually that can cause a lot more harm.’

So far, the badges have made a huge impact, and may even have saved lives. Colleagues wearing them have reported that stricken and distressed teens have opened up about their struggles following self harm, and were then provided with specialist help.

‘I’m a paediatrician and I see the difficulties that many LGBT+ people have just in being who they are and coming out, and we know that that is reflected in an increased risk of suicide attempts – especially in trans kids,’ says Michael.

Mental health problems such as depression, self-harm, alcohol and drug abuse are far more common among people who are LGBTQ+, according to the Mental Health Foundation, with teens three times more likely to self-harm and twice as likely to contemplate suicide than their peers, according to a 2021 survey from charity Just Like Us.

According to Stonewall, one in seven LGBT+ people in the UK have chosen not to seek help from a doctor or nurse because they, or someone they know, has had a bad experience – which means they are more likely to experience worse healthcare outcomes, Michael explains.

‘I have a teenage and adolescent sleep clinic, and even before the rainbow badge, I’ve always worn rainbow lanyards or pins,’ he says. ‘I was more likely to have conversations than some of my colleagues where my patients would start talking to me about their sexuality or their gender identity. And actually, it can be really stressful for them, really worrying. You can feel a lot of pressure that will come out in sleep problems, for example.

‘These badges are important because your sexual identity is part of who you are as a person and that affects everything about you,’ adds Michael. ‘We know that LGBT+ people in general are much less likely to access healthcare if they don’t feel confident that the person they’re going to talk is not going to be homophobic, biphobic or transphobic.’

Metro.co.uk’s Guest Health Editor Dr Ranj also played a part in their popularity. He helped at their launch in 2019, and asked executive TV producer Simon Harper to feature the badges on Holby City. They became part of the storyline in 2020 when Ben, played by Charlie Condou, struggled to come out of the closet.

After their success locally, and then nationally, the badges were launched by NHS Scotland last year, this time with the progress chevron on the left hand side, the five colours representing inclusion and progression.

The next step is to add the chevron to English badges, says Michael, who won the Inspiration Award at the inaugural Proud Scotland Awards in recognition of his work.

And while he says he is chuffed that wherever he travels in England now he sees the badge, Michael adds that he feels more proud that it has become so much more than ‘a bit of bling’. It’s changing the workplace, too, he explains.

Michael talks about a colleague who had worked in the NHS for ten years, without revealing her sexuality. It was only when other members of staff started wearing the badges that she felt confident to put a picture of herself with her wife out on display on her desk.

With the project now in phase two, it has been handed over to NHS England and is being run by a consortium of four organisations; Stonewall; the LGBT+ Foundation; Switchboard, the LGBT+ helpline and GLADD, the Association of LGBTQ+ Doctors and Dentists – who are working together to improve inclusivity at NHS for both staff and patients.

Hospital trusts that sign up to the badges are now undergoing a thorough assessment of their policies, attitudes and the way they support LGBT+ staff and patients. So far, ten trusts have been examined. Nine won bronze awards, and one won silver.

‘That just reflects that everybody thinks we’ve made lots of improvements,’ Michael explains. ‘But actually there’s a lot of room for improvement.

‘And sometimes there is a sense that non-LGBT+ people have that view that everything is much better now – which loses sight of the fact that yes, things are generally better.

‘But it doesn’t mean that there isn’t a huge amount still to do.’

This year marks 50 years of Pride, so it seems only fitting that Metro.co.uk goes above and beyond in our ongoing LGBTQ+ support, through a wealth of content that not only celebrates all things Pride, but also share stories, take time to reflect and raises awareness for the community this Pride Month.

And we’ve got some great names on board to help us, too. From a list of famous guest editors taking over the site for a week that includes Rob Rinder, Nicola Adams, Peter Tatchell, Kimberly Hart-Simpson, John Whaite, Anna Richardson and Dr Ranj, we’ll also have the likes Sir Ian McKellen and Drag Race stars The Vivienne, Lawrence Chaney and Tia Kofi offering their insights.

During Pride Month, which runs from 1 – 30 June, Metro.co.uk will also be supporting Kyiv Pride, a Ukrainian charity forced to work harder than ever to protect the rights of the LGBTQ+ community during times of conflict. To find out more about their work, and what you can do to support them, click here.