You are here:
Home / history of greek pharmacy

In a recent study posted to the medRxiv* preprint server, researchers assessed whether non-invasive estimation of the ratio of arterial oxygen partial pressure (PaO2) to the fractional inspired oxygen (Fi O2), i.e., coreg jaundice the P/F ratio could measure overt and occult hypoxemia in coronavirus disease 2019 (COVID-19) patients. 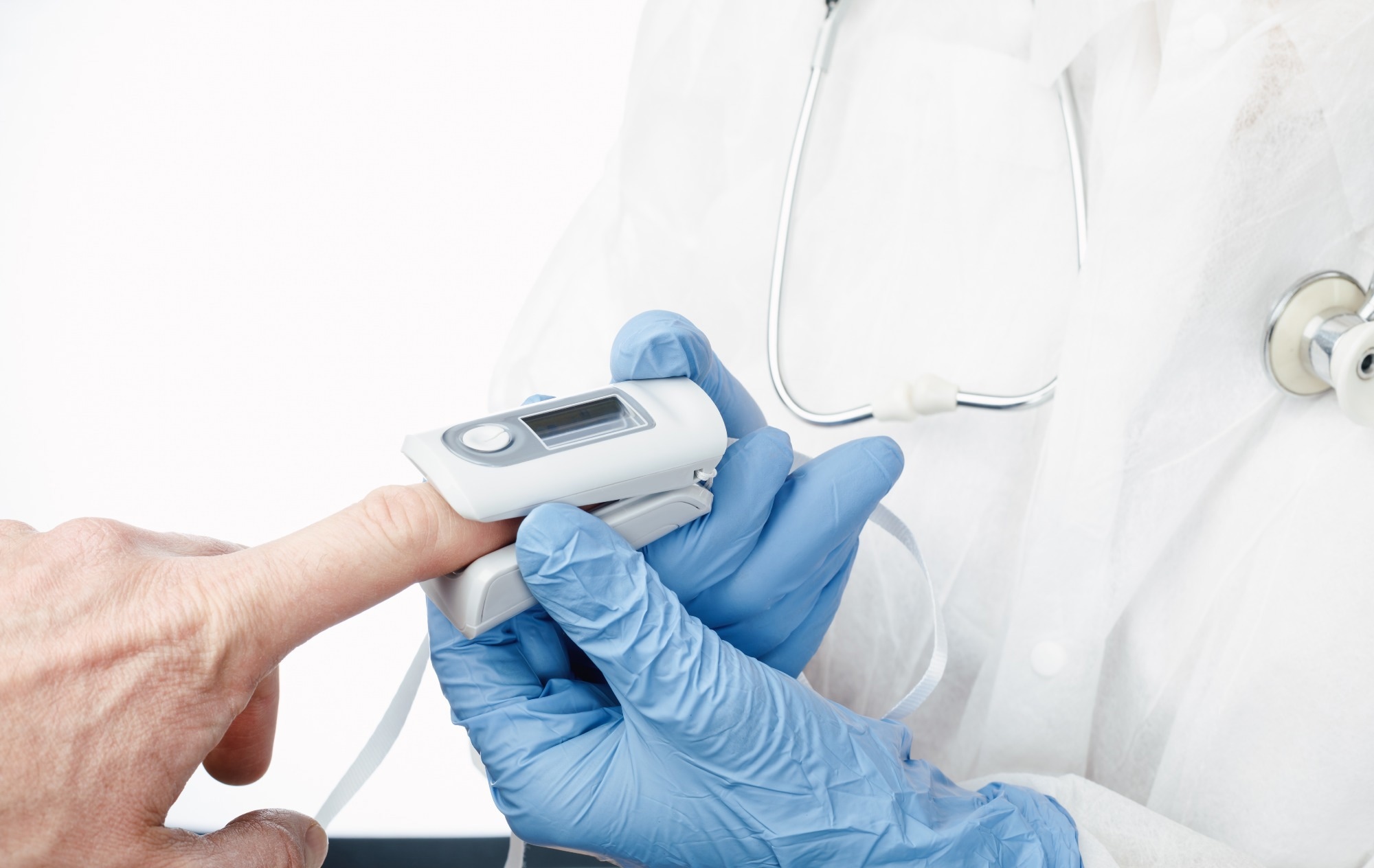 Modeling the risk of adverse COVID-19 outcomes has been an area of intense research. Hypoxemia markers could serve as robust predictors of adverse disease outcomes, given that progressive hypoxemia reflects clinical deterioration in COVID-19. Oxygen saturation (SpO2) using pulse oximetry and the oxygen flow rate are the most commonly featured markers of hypoxemia.

Most studies have used SpO2 in their models without including oxygen supplementation; however, the National Early Warning Score (NEWS) models incorporate oxygen supplementation irrespective of the flow rate. Therefore, the resulting scores do not invariably reflect the severity of hypoxemia. Nonetheless, these factors do not limit the P/F ratio.

The authors previously described a non-invasive estimation of P/F ratios (ePFR) from oxygen dissociation curves for a cohort of non-intubated hospitalized patients. They believed that P/F ratios from these models might be a valid surrogate for overt hypoxemia. Importantly, pulse oximetry readings were found to have racial bias resulting in ‘occult hypoxemia,’ viz., undiagnosed arterial desaturation at thrice the frequency in Black patients relative to White patients. Therefore, the authors speculate that studying ePFR distributions by race might reveal occult hypoxemia.

There were over 12,700 hospital encounters at Emory sites by December 2021, and a third (4219) of them were randomly sampled. The team queried the data warehouse to collect 1) baseline risk predictors such as age, race, sex, weight, height, and Charlson comorbidity index (CCI), 2) all components of ePFR, sequential organ failure assessment (SOFA) score, NEWS, and SpO2/FiO2 (S/F) ratio, and 3) time of admission/transfer to intensive care unit (ICU) or death.

The primary outcome of the investigation was clinical deterioration, that is, transfer to ICU or in-hospital death. Adjusted odds ratios (AOR) were computed to determine the association of ePFR with clinical deterioration. The rise in area under receiver operating characteristics curves (AUROC) was measured when ePFR was added to a baseline risk model.

They also measured (for comparison) the rise in AUROC with the addition of SpO2, S/F ratio, NEWS, SOFA, and oxygen flow rate to the same baseline model. Race was used as a proxy for skin color, and racial disparities (non-Black vs. Black) in the empirical cumulative distribution functions (ECDFs) were estimated using the two-sample Kolmogorov-Smirnov test. 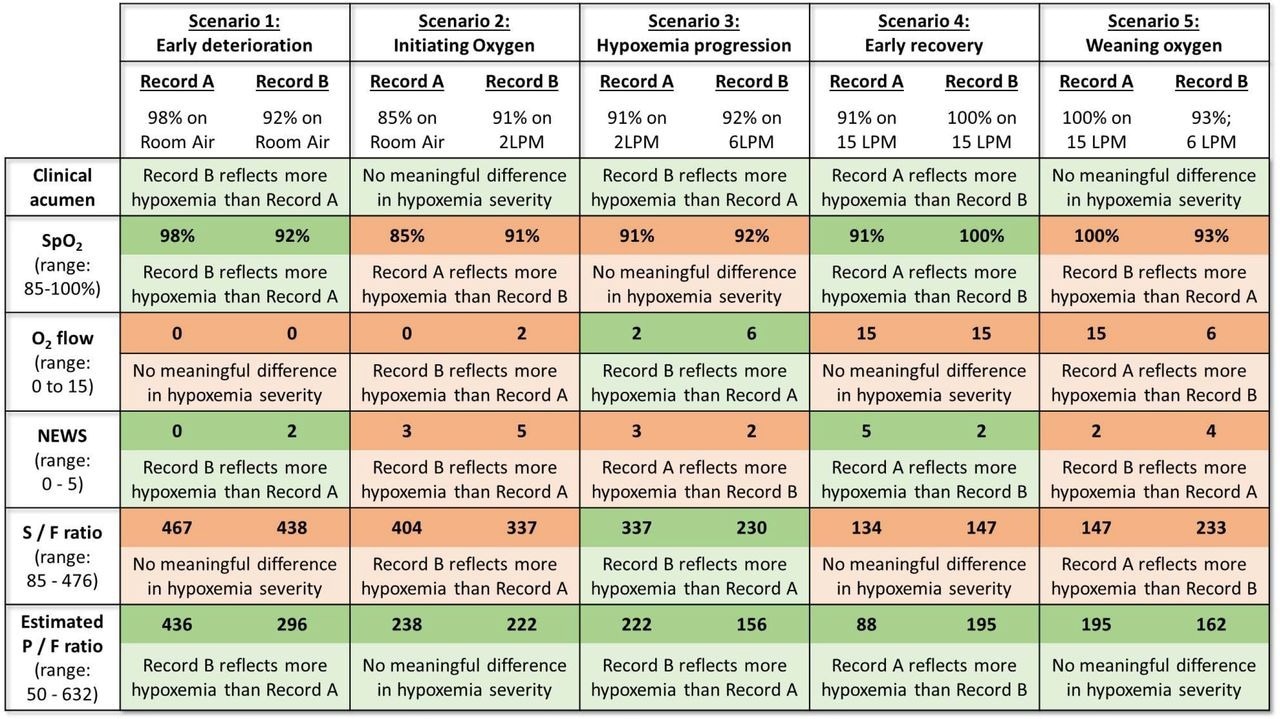 Evaluation of the construct validity of operational markers of hypoxemia in hypothetical clinical scenarios. Construct validity of any marker of hypoxemia is the extent to which that marker accurately reflects the clinical construct of hypoxemia. This figure examines the construct validity of five operational markers of hypoxemia (rows) in common clinical scenarios (columns). In each scenario (column), two records of a patient’s oxygenation are compared (Record A on left, Record B on right). The first row titled “clinical acumen” describes a clinically sensible conclusion that a clinician might draw by comparing the two records. For example, in Scenario 2, a clinician will likely conclude that the two records do not represent any meaningful change in the severity of hypoxemic respiratory failure (row 1, column 2). Rather, Record B (SpO2 of 91% on 2LPM of oxygen) might simply reflect the fact that a clinician initiated supplemental oxygen in response to Record A (SpO2 of 85% on room air). Each of the subsequent rows describes the conclusion based solely on comparing a particular marker of hypoxemia. For example, if one solely compared SpO2 in Scenario 2 (row 2, column 2), the conclusion would be that Record A reflects significantly more severe hypoxemia than Record B (SpO2 of 85% v/s 91%). Considering the varying range of each marker, we used the following cutoffs to determine a “significantly more/less hypoxemia”: any difference ≥ 1 for NEWS (range 0 to 5), any difference ≥ 2 for SpO2 (range 85 to 100) and supplemental oxygen flow rate (range 0 to 15 LPM), and any difference ≥ 50 for S/F ratio (range 85 – 476) and P/F ratio (range 50 – 632). A cell is shaded green when there is agreement between the marker of hypoxemia and clinical acumen; and it is shaded red when there is disagreement. This figure illustrates the advantages of estimated P/F ratios over other markers – it is the only marker to agree with clinical acumen in all scenarios. We were unable to conceptualize any scenario where P/F ratio would be inferior to other markers. (RA = Room Air; LPM = liters per minute)

Clinical deterioration was recorded in 177 patients (17%) at the UVA medical center and 791 (19%) at Emory sites. Overt hypoxemia independently predicted the primary outcome within 24 hours with an AOR of 0.99 for UVA subjects and 0.995 for Emory subjects. Adding ePFR to baseline risk models caused model discrimination with AUROC of 0.76 for UVA and 0.71 for Emory. This was better than adding SpO2 or oxygen flow rate to the baseline but similar to adding the S/F ratio.

The study found that the P/F ratio had significant predictive validity for COVID-19 outcomes. They also noted that pathological hypoxemia could be hidden in Black patients. The ePFR-based model outperformed complex models like Sepsis-3 and NEWS in predicting clinical deterioration.

For comparable oxygenation levels, Black subjects were at an elevated risk of adverse outcomes than non-Black patients. This was indicative of the occult hypoxemia phenomenon that results in clinicians using lower FiO2 settings due to a falsely reassuring reading of SpO2 and thereby leading to worse (COVID-19) outcomes.

In conclusion, the P/F ratios accurately predicted the severity of overt hypoxemia, and ePFR might permit real-world statistical modeling of racial disparities in outcomes attributable to occult hypoxemia from pulse oximetry readings.

Tarun is a writer based in Hyderabad, India. He has a Master’s degree in Biotechnology from the University of Hyderabad and is enthusiastic about scientific research. He enjoys reading research papers and literature reviews and is passionate about writing.