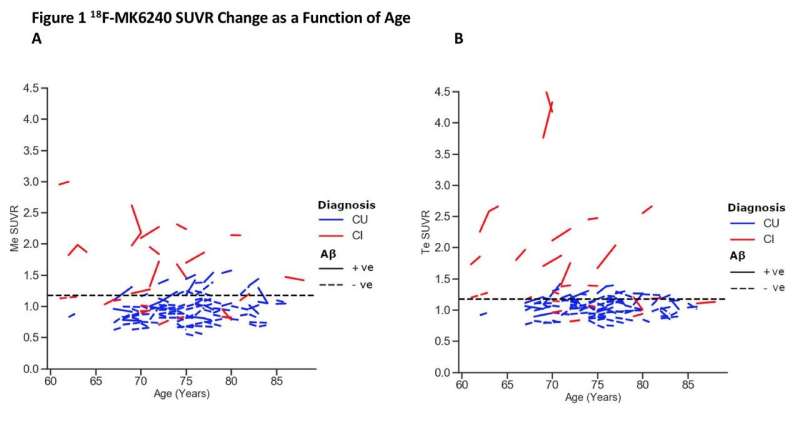 A novel positron emission tomography (PET) radiotracer has been shown to effectively measure increases in brain tau—a distinguishing characteristic of Alzheimer’s disease—before any symptoms of the disease are observed. With the potential to measure increases in tau over a long period of time, this tracer offers an important tool to assess the effectiveness of Alzheimer’s disease treatments in clinical trials. This research was presented at the Society of Nuclear Medicine and Molecular Imaging 2021 Annual Meeting.

Tau is a protein commonly found in healthy brain neurons. In people with certain brain disorders, like Alzheimer’s disease, chemical changes cause tau proteins to accumulate in various parts of the brain. As such, tau is valuable as a biomarker for measuring disease progression.

In the study, researchers sought to detect patterns and rates of tau accumulation in both a cognitively normal aging population and in those with Alzheimer’s disease. PET imaging with the novel radiotracer 18F-MK6240 was performed on all participants at baseline and after 12 months. After each scan, uptake of the radiotracer was measured in multiple areas of the brain.

Increases in tau were measured in both participant groups and longitudinal tau imaging was effective in discriminating between the two cohorts. The uptake of 18F-MK6240 was higher at baseline and after one year in participants who were on the Alzheimer’s disease continuum in comparison to the cognitively normal aging participants.