You are here:
Home / buy generic levaquin ca no prescription

Knowledge of the bacterial and eukaryotic translation mechanisms supersedes what is understood about mitochondrial translation. This is due to the lack of suitable in vitro mimics of the mitochondrial environment in which the process can be studied. 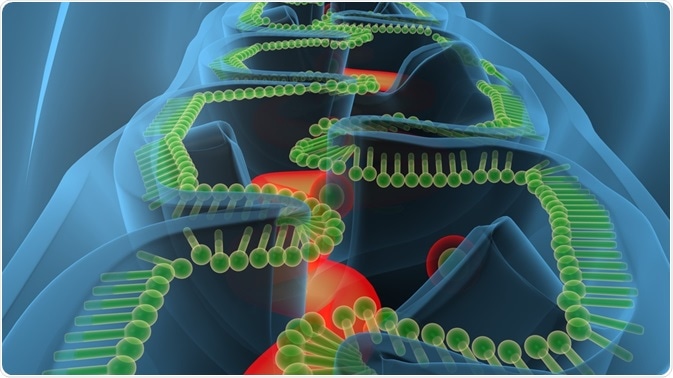 The mitochondrial DNA translation machinery resembles that of prokaryotes

The first obvious difference is that the genetic code used by the mitochondria for the purposes of translation is distinctly different from the code established for eukaryotic nuclear protein translation both in the cytoplasm and in bacteria.

A second point that distinguishes the mitochondrial translation mechanism are the features of mRNAs. Mitochondrial mRNAs typically have few to no 5’ untranslated regions, are uncapped, and has attached to it a poly(A) tail positioned within the vicinity of the stop codon, or immediately after it.

The smallest ribosomal subunit of the mitochondria, called the mitoribosome, is capable of binding with high affinity to these mitochondrial mRNAs independently of both initiation factors or RNA.

Thirdly, despite only employing 22 tRNAs, the decoding mechanism can translate all codons present in a transcript. This is significantly lower than the 31 tRNAs theorized to be required according to the ‘wobble hypothesis’.

Finally, mammalian mitochondria can use only one tRNAMet rather than two tRNAMet in the initiation (in the presence of a formyl group) and elongation phases (lacking formyl). Additionally, the mitochondria of other lower eukaryotes also use two specialized tRNAMet.

Components of the Mitochondrial Translation Machinery

The translation apparatus of the mitochondria is composed of rRNAs and tRNAs encoded by the mitochondrial DNA, together with proteins synthesized in the cytoplasm. These include factors required for initiation, elongation, and termination: mitochondrial ribosomal proteins (MRPs), aminoacyl-tRNA synthetases, and methionyl-tRNA transformylase.

The initiation translation factors utilized in conventional nuclear translation as seen in bacteria include IF1, IF2, and IF3. Initiation factors 1 and 2 are essential for initiation. The translation machinery in mitochondria employs two orthologous IF2 and IF3 proteins, but no orthologues of IF1. Orthologs are homologous sequences of proteins found in different species.

The elongation factors present in prokaryotes have also been found in human mitochondria, these are mtEFTu, mtEFTs, and mtEFG. Prokaryotes usually depend on a single EFG protein for the process of elongation an termination. The mitochondria, however, employ two homologous forms of EFG: mtEFG1 and mtEFG2. They each occupy separate functionalities, demonstrated by evidence that defective mtEFG1 is implicated in mitochondrial disorders. Further, mtEFG2 shows distinct spatial expression in the skeletal muscle, heart, and liver.

Despite their common characteristic of a high metabolic energy rate the significance of mtEFG2 in these tissues remains to be elucidated. Deletion of the mtEFG2 in yeast, in contrast to mtEFG1, does not affect mitochondrial protein synthesis.

It has been shown that overexpressing mtEFG2 cannot compensate for a mtEFG1 defect. This suggests that mtEFG2 does not function in translocation. Translocation is the process by which two tRNAs and the associated mRNAs move through the ribosome via a multi-step process. Hence, the absence of mtEFG1 cannot be rescued by mtEFG2, thereby preventing the movement of the mRNA-tRNA moiety.

The proceeding codon cannot, therefore, move into the decoding center and the translation of the mRNA is discontinued. This theory was confirmed by Tsuboi et al., who evidenced the specific role of mtEFG1 in the catalyzation of translocation.

In one study, mtEFG2 was shown to function in ribosome recycling and demonstrated a lack of translocation catalysis. Therefore, the prokaryotic EFG protein has dual functionality. This is otherwise distributed between mtEFG1 and mtEFG2 in mitochondria.

In bacteria, the release factors RF1, RF2, RF3, and the ribosome recycling factor RRF catalyze termination of translation. RF1 and RF2 are class I factors that catalyze the hydrolysis of peptidyl- tRNA in a codon-specific manner.

RF3 is a class II factor, which stimulates class I factor activity and ribosomal dissociation. Further, in bacteria both RF1 and RF2 recognize the UAA stop codon, and recognition of UAG and UGA occurs in a specific manner by RF1 and RF2, respectively.

In the eukaryotic cytosol, however, it is the release factors RF1 and RF3 that are implemented in the termination step, only one class I factor recognizes all three stop codons. Despite the understanding of the termination factors involved in both the eukaryotic cytosol and prokaryotes, understanding of the termination factors involved in the mitochondria is poor. In the mitochondria, two release factors (mtRF1 and mtRF1a), and a recycling factor (mtRRF) have been identified.

mtRF1a, in particular, is responsible for translation termination at UAA and UAG codons. This is analogous to the bacterial RF1. The mitochondrial release factors that recognize the other two mitochondrial stop codons, AGG and AGA, remains to be resolved. mtRF1, the second release factor that has not been proven to provide such a release function, may, in fact, release the transcript at AGG and AGA. The other possibility is that AGA and AGG may, in fact, be edited to UAG, and subsequently be recognized by mtRF1a.

Mammalian mitoribosomes also differ in structure: they contain half the rRNA present in bacterial mitochondria. Despite this, they have a higher protein content due to protein accumulation, in size, and through recruitment, resulting in a greater molecular mass.

The tRNAs are the final differentiating element of mammalian mitochondria. They are shorter than bacterial or eukaryotic cytoplasmic tRNAs and possess a weaker tertiary structure due to variations in the D- and T-loops that govern the degree of folding.

Post-transcriptional modifications appear to regulate folding as evidenced by aberrant folding in their absence. These PTMs also improve tRNA specificity and correct recognition by mRNA codons.

The initiation process of translation is unclear, but the most current evidence suggests that the factor mtIF3 mediates the disassembly of the mitoribosome. This event subsequently allows the initiation complex to form. This is because dissociation of the two-component subunits (the small SSU and the large LSU) exposes the interface at which they are associated, thereby enabling the initiating amino acid-tRNA complex, fMet-tRNAMet and mRNA to bind.

The factor mtIF3 is presumed to aid mRNA binding to the mitoribosomal SSU, which aligns the AUG start codons at the peptidyl (P) site.  Furthermore, mtIF3 is thought to prevent the premature binding of fMet-tRNA and mtIF2.

The binding of fMet-tRNA depends on mtIF2 and is further stimulated by binding ofGTP. The association of the LSU with the SSU releases mtIF3. Further, GTP hydrolysis is triggered by the LSU resulting in the release of mtIF2. This marks the end of the initiation phase and the proceeding elongation can begin.

Elongation in mitochondrial translation is like that observed in bacteria, with a difference only in the magnitude of the dissociation constants between mtEFTu and its interacting partners. The ratios of the various elongation factors, which can be adapted in a tissue-specific manner, affect the rate of elongation.

The elongation factor, mtEFTu, binds to GTP, and this moiety interrogates aminoacyl-tRNAs complexes for incorrect (or non-cognate) pairings of tRNAs and amino acids. This process is called misacylation. mtEFTu also inhibits the hydrolases-mediated degradation of the tRNA as it transports it to the acceptor (A) site on the ribosomal SSU, where it functions in the mRNA decoding process.

The nucleotide exchange protein is responsible for ‘re-setting’ mtEFTu by exchanging the GDP for GTP, thereby enabling mtEFTu to participate in another cycle of elongation. The aminoacyl-tRNA on the mitoribosome is subsequently displaced, entering the peptidyl transferase center present of the LSU. Here, catalyzation of the peptide bond occurs and the peptide chain is extended by one amino acid.

mtEFG1 bound by GTP catalyzes this movement from one site to the adjacent i.e. A to P, this is called translocation. mtEFG1 achieves this by mediating conformational changes in both the mtEFG1 and mitoribosome.

The A and P site tRNAs are translocated to the P and exit (E) sites, respectively. Furthermore, the mRNA is shifted by three nucleotides (one codon) to allow the continuation of the process. The tRNA occupying the E site is uncharged (no longer attached to an amino acid) because of peptide bond formation in the adjacent P site.

The tRNA is subsequently able to leave the mitoribosome, enabling a new cycle of elongation to begin. Thus, the elongation process can be summarized as A-P-E site translocation concomitant with peptide extension.

Upon encountering the stop codon (UAA, UAG, AGA or AGG) at the A site, mitochondrial release factor mtRF1a (or mtFR1) stimulates protein dissociation from the last tRNA molecule present in the P site. Hydrolysis of the ester bond between the nascent polypeptide and tRNA is presumed to be catalyzed, in a GTP-dependent manner, by the peptidyl transferase center on the LSU in response to mtRF1a/mtRF1. Following peptide release, the recycling factor mtRRF and mtEFG2·GTP permit dissociation of the tRNA, mRNA and mitoribosomal subunits. GTP hydrolysis is required for both mtRRF and mtEFG2·GDP dissociation from the LSU.