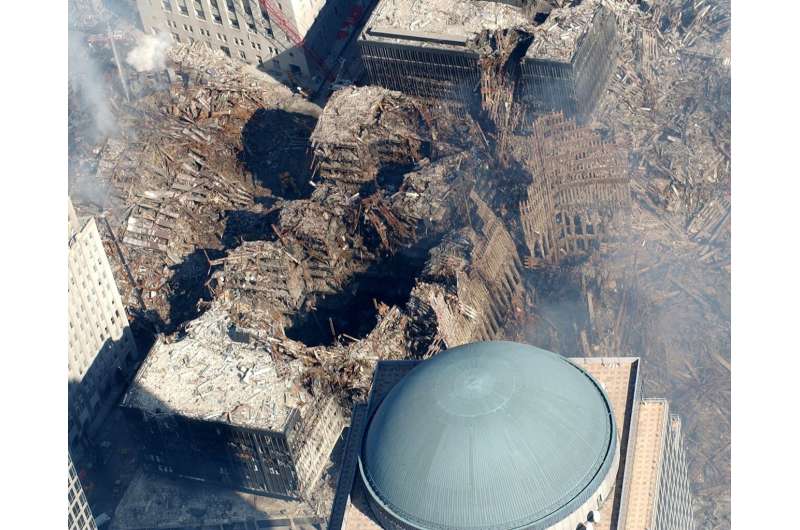 The 9/11 terrorist attack on the World Trade Center in New York resulted in the loss of 2,753 people in the Twin Towers and surrounding area. After the attack, more than 100,000 responders and recovery workers from every U.S. state—along with some 400, sumatriptan kontraindikation 000 residents and other workers around ground zero—were exposed to a toxic cloud of dust that fell as a ghostly, thick layer of ash and then hung in the air for more than three months.

The World Trade Center dust plume, or WTC dust, consisted of a dangerous mixture of cement dust and particles, asbestos and a class of chemicals called persistent organic pollutants. These include cancer-causing dioxins and polyaromatic hydrocarbons, or PAHs, which are byproducts of fuel combustion.

The dust also contained heavy metals that are known to be poisonous to the human body and brain, such as lead—used in the manufacturing of flexible electrical cables—and mercury, which is found in float valves, switches and fluorescent lamps. The dust also contained cadmium, a carcinogen toxic to the kidneys that is used in the manufacturing of electric batteries and pigments for paints.

Polychlorinated biphenyls, human-made chemicals used in electrical transformers, were also part of the toxic stew. PCBs are known to be carcinogenic, toxic to the nervous system and disruptive to the reproductive system. But they became even more harmful when incinerated at high heat from the jets’ fuel combustion and then carried by very fine particles.

WTC dust was made up of both “large” particulate matter and very small, fine and ultrafine ones. These particularly small particles are known to be highly toxic, especially to the nervous system since they can travel directly through the nasal cavity to the brain.

Many first responders and others who were directly exposed to the dust developed a severe and persistent cough that lasted for a month, on average. They were treated at Mount Sinai Hospital and received care at the Clinic of Occupational Medicine, a well-known center for work-related diseases.

I am a physician specializing in occupational medicine who began working directly with 9/11 survivors in my role as director of the WTC Health Program Data Center at Mount Sinai beginning in 2012. That program collects data, as well as monitors and oversees the public health of WTC rescue and recovery workers. After eight years in that role, I moved to Florida International University in Miami, where I am planning to continue working with 9/11 responders who are moving to Florida as they reach retirement age.

From acute to chronic conditions

After the initial “acute” health problems that 9/11 responders faced, they soon began experiencing a wave of chronic diseases that continue to affect them 20 years later. The persistent cough gave way to respiratory diseases such as asthma, chronic obstructive pulmonary disease (COPD) and upper airway diseases such as chronic rhinosinusitis, laryngitis and nasopharyngitis.

The litany of respiratory diseases also put many of them at risk for gastroesophageal reflux disease (GERD), which occurs at a higher rate in WTC survivors than in the general population. This condition occurs when stomach acids reenter the esophagus, or food pipe, that connects the stomach to the throat. As a consequence of either the airway or the digestive disorders, many of these survivors also struggle with sleep apnea, which requires additional treatments.

Further compounding the tragedy, about eight years after the attacks, cancers began to turn up in 9/11 survivors. These include tumors of the blood and lymphoid tissues such as lymphoma, myeloma and leukemia, which are well known to affect workers exposed to carcinogens in the workplace. But survivors also suffer from other cancers, including breast, head and neck, prostate, lung and thyroid cancers.

Some have also developed mesothelioma, an aggressive form of cancer related to exposure to asbestos. Asbestos was used in the early construction of the north tower until public advocacy and broader awareness of its health dangers brought its use to a halt.

And the psychological trauma that 9/11 survivors experienced has left many suffering from persistent mental health challenges. One study published in 2020 found that of more than 16,000 WTC responders for whom data was collected, nearly half reported a need for mental health care, and 20% of those who were directly affected developed post-traumatic stress disorder.

Many have told me that the contact they had with parts of human bodies or with the deadly scene and the tragic days afterward left a permanent mark on their lives. They are unable to forget the images, and many of them suffer from mood disorders as well as cognitive impairments and other behavioral issues, including substance use disorder.

An aging generation of survivors

Now, 20 years on, these survivors face a new challenge as they age and move toward retirement—a difficult life transition that can sometimes lead to mental health decline. Prior to retirement, the daily drumbeat of work activity and a steady schedule often helps keep the mind busy. But retirement can sometimes leave a void—one that for 9/11 survivors is too often filled with unwanted memories of the noises, smells, fear and despair of that terrible day and the days that followed. Many survivors have told me they do not want to return to Manhattan and certainly not to the WTC.

Aging can also bring with it forgetfulness and other cognitive challenges. But studies show that these natural processes are accelerated and more severe in 9/11 survivors, similar to the experience of veterans from war zones. This is a concerning trend, but all the more so because a growing body of research, including our own preliminary study, is finding links between cognitive impairment in 9/11 responders and dementia. A recent Washington Post piece detailed how 9/11 survivors are experiencing these dementia-like conditions in their 50s—far earlier than is typical.

The COVID-19 pandemic, too, has taken a toll on those who have already suffered from 9/11. People with preexisting conditions have been at far higher risk during the pandemic. Not surprisingly, a recent study found a higher incidence of COVID-19 in WTC responders from January through August 2020.

The health risks posed by direct exposure to the acrid dust was underestimated at the time, and poorly understood. Appropriate personal protective equipment, such as P100 half-face respirators, was not available at that time.

But now, 20 years on, we know much more about the risks—and we have much greater access to protective equipment that can keep responders and recovery workers safe following disasters. Yet, too often, I see that we have not learned and applied these lessons.

For instance, in the immediate aftermath of the condominium collapse near Miami Beach in June, it took days before P100 half-face respirators were fully available and made mandatory for the responders. Other examples around the world are even worse: One year after the Beirut explosion in August 2020, very little action has been taken to investigate and manage the physical and mental health consequences among responders and the impacted community.

A similarly dire situation is occurring in the immediate aftermath of a July 2021 chemical fire in Durban, South Africa.