Sydney loves cocaine. Melbourne and Canberra aren’t far behind, according to sewage drug monitoring reports. Yet when another celebrity is caught snorting the stuff, everyone acts appalled and it’s called a scandal.

It suggests the public rhetoric clashes with private attitudes and people are keeping up appearances by feigning shock. Isn’t it time we all stopped shaming people and stopped pretending; is anyone actually surprised many Australians occasionally use illicit substances? 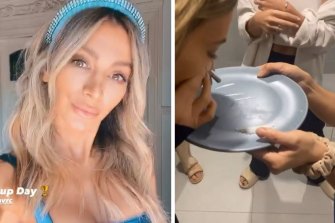 A video of Nadia Bartel snorting white powder was uploaded to Instagram.

The 36-year-old’s grovelling apology was vague about whether it was for the alleged illicit drug use or for allegedly flouting Melbourne’s lockdown rules by gathering with friends.

Let’s assume she was apologising for both.

When it comes to the apparent drug use, did the mother-of-two need to be so “truly deeply sorry”? And did she really deserve the onslaught of schadenfreude dripping from social media posts? I don’t think so.

Sure, after being immediately dropped from her lucrative endorsement deals, one may say she had no other choice but to apologise. But was she actually sorry for the alleged act, or was she sorry for getting caught? And if it is the latter, isn’t it time Bartel – and the rest of us – got off our high horses?

The line between what is a legal drug and an illegal one is inconsistent. Consider that Charles II of England, in 1675, tried to ban coffeehouses. The caffeine-fuelled political debates that occurred within them were, he insisted, “Disturbance of the Quiet and Peace of the Realm”. Before cocaine was illegal, it was used with sugar syrup in Coca-Cola. When heroin – which comes from the German term heros referring to an ancient Greek hero – was first produced in 1898 by Bayer it was considered a “wonder drug” and promoted in cough syrups for children. Alcohol and cigarettes have also gone in and out of legal fashion over time – not even apple trees were safe during the prohibition era (1920-1933) when the FBI went around cutting them down lest they be used to make cider.

Humans have taken drugs to alter our perception of ourselves and the world around us for millennia. We have used substances for a host of reasons including to socialise or escape, medicinally or ritually, to enhance productivity or creativity.

According to the 2019 National Drug Strategy Household Survey, an estimated nine million (43 per cent) people aged 14 and over in Australia had illicitly used a drug at some point in their lifetime and an estimated 3.4 million (16.4 per cent) had used one in the previous 12 months.

This occurs across virtually every profession and every socioeconomic status. Many drug users are educated, healthy and productive individuals. Yes, there are police, doctors, lawyers, fitness instructors even health influencers and parents who take drugs.

That’s before we consider socially acceptable, legal drug use: 79 per cent of Australian adults drink alcohol, although it’s not the most popular drug we consume.

In his new book, This Is Your Mind On Plants, American journalist Michael Pollan notes: “Something like 90 per cent of humans ingest caffeine regularly, making it the most widely used psychoactive drug in the world, and the only one we routinely give to children (commonly in the form of soda). We don’t usually think of caffeine as a drug, or our daily use of it as an addiction, but that is only because coffee and tea are legal and our dependence on them is socially acceptable.”

Pollan also points out that, “the war on drugs is in truth a war on some drugs, their enemy status the result of historical accident, cultural prejudice, and institutional imperative.”

This is true in Australia too.

“Most people assume drugs are illegal because they are dangerous. But the reasons aren’t related to their relative risk or harm,” said Professor Nicole Lee of the National Drug Research Institute, Curtin University and Jarryd Bartle, a sessional lecturer in Criminal Law, RMIT University in The Conversation.

Lee and Bartle reference a 2010 study where experts ranked 20 legal and illegal drugs in terms of the harms they caused the user and the community, including the health impact, economic cost, and crime.

Alcohol topped the list with heroin and crack cocaine in second and third places while MDMA (ecstasy), LSD and mushrooms were ranked down the bottom.

None of this is to deny that drugs come with risks and can wreak devastating havoc on some people’s lives. Around one in 20 Australians has an addiction or substance abuse problem. The most commonly abused substances in Australia are tobacco and alcohol (followed by cannabis and amphetamines) as well as the use of prescription medicines, like painkillers or sedatives, for non-medical reasons.

But, when we act shocked and jump on our moral high horse when someone like Bartel allegedly takes drugs, well, stones and glass houses and all that.

The experts on drugs don’t judge those who take them (recreationally or otherwise) and believe reform is essential. The “tough” stance, as a government spokesperson called it recently responding to inaction on the 109 NSW Ice inquiry recommendations, helps no one.

We can sniff at the Bartels of the world, while we sip our lattes, and judge those who have serious problems with either legal or illegal substances. But it’s not 1900 anymore, and perhaps we’re smarter now? Perhaps it’s time for all of us to change our minds.

Make the most of your health, relationships, fitness and nutrition with our Live Well newsletter. Get it in your inbox every Monday.

Most Viewed in Lifestyle