Keeva Blackwood, Deidra Fryer, and Tricia Stewart Moody have a few things in common. They all live in Maryland, all of them are Black mothers, buy zovirax overnight shipping without prescription and they all believe the medical community in this country discriminates against African Americans. They say they or their loved ones have experienced discrimination in a health care setting first-hand.

Blackwood, a 42-year-old woman from Columbia, MD, is a business analyst for Medicaid programs. She used to see white doctors, but no more. All her doctors now are Black.

“That was intentional because of the previous care that I feel like I received. That I wasn’t taken seriously when I came in with a concern. It was either they were going to throw medication at me without doing labs or without touching me or without the proper screenings, and I just felt like, as I educated myself over time and noticed that what I was feeling wasn’t just made up in my head, that maybe it’s time that I start seeing other providers that look like me.”

Blackwood has had several bad experiences, and two involved pregnancies.

“I was experiencing bleeding; I was experiencing extreme nausea and it was just, ‘Oh that’s something you’re going to go through. That’s something that happens in the beginning of the pregnancy,'” she says “No matter how much I called every day, like, ‘Hey this is not getting better, I’m feeling worse, I’m dehydrated, I had to be hospitalized, I’m losing extreme weight,’ it was never taken seriously to the point where I ended up miscarrying two different times.”

She lost a set of twins and a son that was delivered at 27 weeks. She was just 24 years old.

“Now that I’ve educated myself, I know micro-preemies can survive, there’s something that could have been done. That still sticks in the back of my mind,” she says.

According to new research released by the American Board of Internal Medicine (ABIM) Foundation, Blackwood’s experience is not uncommon. The survey was done by the National Opinion Research Center (NORC) at the University of Chicago, one of the largest independent social research groups in the country.

Eleven percent of Hispanic adults and 8% of Asian adults also reported discrimination by a doctor. 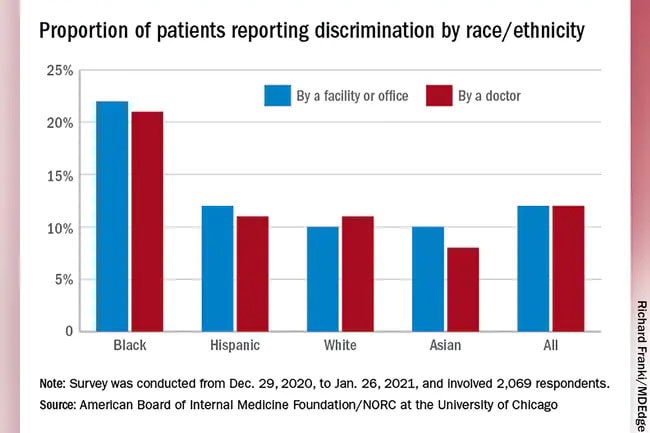 Baron says a major focus in the work they are doing at the foundation centers on trust. One reason they did the survey was to understand the link between trust, health equity, and the way different races are served by the medical community.

“You’ve got communities that you’re serving who don’t trust you,” he says. “And they have reason not to trust you because their experience with you has not been a positive one. And so, we’re inviting health care organizations to think about what would they need to do to change that, what we need to do organizationally to change that.”

Baron, an internist and geriatrician, hopes the survey invites health care leaders to confront what he calls earned mistrust.

“There’s a reason these populations feel that way when they confront the American health care system, and it’s based on the way they and their parents and their families have been treated,” he says.

But according to the survey, the knife seems to cut both ways. About a third of doctors say they have experiences discrimination by a patient based on their race or ethnicity.

“I have colleagues who have told me that patients in an emergency room have said that, you know, I don’t want that Black doctor to take care of me,” Baron says.

As for Blackwood, she says her best friend who is Latino had a similar experience with doctors at that same medical practice, while a white friend had a very different experience.

“It dawned on me we’re minorities, she’s not. She is a white woman, and her experience was completely different. … The stuff that she complained about, her issues, her problems were addressed, ours weren’t,” Blackwood says. “And absolutely it had something to do with race.”

After those experiences, she switched to a Black obstetrician. Today, she has a healthy 11-year-old daughter. But the children she lost are painful reminders of the poor care she believes she received.

“There’s Nothing Else We Can Do”

For Deidra Fryer, a 59-year-old educator from Laurel, MD, it was her 76-year-old mother’s massive stroke that resulted in a confrontation about discriminatory care. About a year after the stroke, she had to be hospitalized again. Fryer, a full-time student in doctoral and master’s programs, recalled the tense conversation she had with an on-call doctor treating her mom.

“A young white male doctor came out to talk to me about my mother’s condition, and he said to me basically, she’s old, there’s nothing else we can do,” she recalls. “I said to him she may be old, but you’re the doctor, and you need to do everything that you can for her. In my mind, he said she’s an old Black woman and we don’t want to do any work on her.”

She remembers them both walking away from the exchange very angry. She never saw him again.

Growing up in Albany, GA, Fryer says she always saw Black doctors. That changed when she moved to Maryland 32 years ago, but today, all of her doctors are Black women except for an eye doctor she sees once a year and an ear, nose, and throat doctor she has seen only twice.

“When you have people that were brought up in a system that doesn’t see Black people as fully human, they’re not going to treat us as fully human,” she says. “We have to grapple with what we have in America and what we believe in America about the humanity of people of color. And until we grapple with that a little better, our medical systems are going to be caught in the grips of the systematic racism that exists in this country.”

Baron believes it all points to systemic racism inherent in health care.

“There’s no explanation for data like this other than structural racism, and which is to say racism as it manifests itself in the day-to-day practice and the day-to-day experience that patients have in the delivery system.”

“I Think We Are Not Taken Seriously”

Not surprising is that people who reported being discriminated against are twice as likely to say they don’t trust the system.

Her personal doctors are Indian, African American, and white.

“I think that the brown-skinned people to encompass Indian and African American are more attentive and more compassionate. While my white doctors do listen, I’m not sure they always hear,” she says.

About 6 years ago, Moody began having severe headaches. After visits with white male doctors and no relief, she found a Black neurologist. By that time, the headaches had fallen into a pattern: 7 straight days of pain, then 5 days without. She started going to the emergency room when she couldn’t sleep.

She visited the emergency room three times in 3 weeks. During her final visit, she says a white doctor she had seen in a previous visit refused to treat her, suggesting she had a drug problem.

“The third time I went, she came in, she said, ‘I’m going to be frank with you, I am not going to give you anything to relieve your migraine,'” and hinted she believed Moody was addicted to drugs.

Moody said she was totally baffled. “I let her know one thing: I am not a drug addict. I was just trying to get relief. The ER doctor was kind of nasty about it.”

But a nurse, who was also white, saw that Moody was in pain. The nurse told her that her husband also gets migraines and suggested 800 milligrams of ibuprofen and a Benadryl tablet. It helped, Moody says.

Moody never went back to that hospital for her headaches. Instead, she sought treatment at Johns Hopkins Blaustein Pain Treatment Center. It was there that she finally got a firm diagnosis: She was having something between cluster headaches and migraines.

The doctor there “kind of chuckled. He said, ‘Wow, it took us 6 years to figure out what was wrong,'” Moody says. It shouldn’t have taken so long, the doctor told her.

Moody’s journey to diagnosis and treatment left an indelible mark.

“When it comes to health care, I think we are not taken seriously,” she says. “Oftentimes when something that involves you having to see a doctor and you may be in pain, agony, you might not look like the professional person that you are. And I think they just look at you and they stereotype you.”

“We Know That the Health Care System Is Broken”

Experiences like those of Moody, Fryer, and Blackwood, are no surprise to Ada Stewart, MD, president of the American Academy of Family Physicians, and a family doctor with Cooperative Health Centers in Columbia, SC. Neither are the results of the survey.

“This is nothing that is new. We know that the health care system is broken. This became painfully evident during the COVID-19 pandemic,” she says. “We saw how it prioritizes fee-for-service payment over value-based care, which results in limited access to health care, worsening health outcomes, and poorer quality of life for the most disadvantaged and vulnerable people in our communities.”

We can’t be “blind to the fact that systemic racism is here,” she says. “We need to acknowledge the issues of systemic racism and find solutions to fix them, in health care and beyond.”

Stewart says she can speak from experience as a Black doctor because she has had patients tell her that they don’t want a Black doctor.

According to the survey, most doctors give the country’s health care systems’ equity efforts a grade of A or B and are optimistic their systems will improve equity and diversity in the next 5 years. Stewart says she’s hopeful there will be progress.

She believes that diversifying the workforce so that it mirrors diverse communities is a good place to start.

“We also need to improve the diversity of leaders in our nation’s [executive] suites — the individuals who are making the decisions and who can influence policy changes,” she says. “With this kind of focus, I am very optimistic that we can make a difference and ensure we address the systemic racism that exists within health care.”

Baron has this advice for his colleagues:

“I shouldn’t as a clinician enter a room assuming that we’re just starting the story there,” he says. “And I should be aware that there’s a longer story that the patient is bringing into the room with them, I need to understand it, I need to be aware of it, I need to realize the way in which it is actively influencing the care that people get now, and I need to do everything I can to try to address that.”

He believes getting the medical community to a level of awareness and ownership is going to be a journey and hopes that this is a step on that journey.

American Board of Internal Medicine Foundation: “Surveys of Trust in the U.S. Health Care System.”