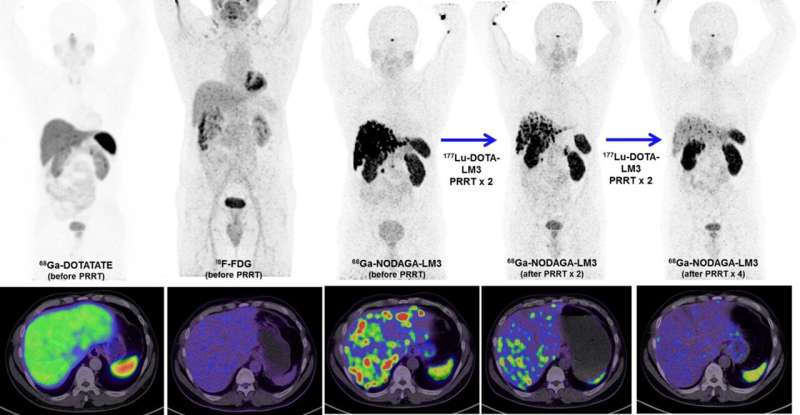 A new type of peptide receptor radionuclide therapy (PRRT) has been shown to control disease in 85 percent of patients with metastatic neuroendocrine neoplasms, achieving complete remission in some patients. The first-in-human study utilized 177Lu-DOTA-LM3 therapy, which was administered without severe adverse effects and was well tolerated by the majority of patients. This research was published in the November issue of The Journal of Nuclear Medicine.

“Over the past two decades, SSTR-targeted imaging using radiolabeled somatostatin agonists followed by PRRT has been remarkably successful in managing neuroendocrine tumors,” said Jingjing Zhang, MD, Ph.D., assistant professor in the Department of Diagnostic Radiology at the Yong Loo Lin School of Medicine at the National University of Singapore in Singapore. “However, potent SSTR antagonists—which only poorly internalize into tumor cells if at all—have surprisingly been shown to be even superior to agonists for such purposes.”

To further investigate the role antagonists can play in treating neuroendocrine tumors researchers developed a study to determine the safety, biodistribution and efficiency of a new type of SSTR antagonist, 177Lu-DOTA-LM3. Fifty-one patients with progressive, heavily pretreated neuroendocrine neoplasms underwent PRRT with 177Lu-DOTA-LM3. Treatment-related adverse events were graded for all participants, and dosimetry was performed for 11 patients.

177Lu-DOTA-LM3 was administered without severe adverse effects and was well tolerated by most patients. Disease control was reached in 40 out of 47 patients (85 percent) who were monitored after 177Lu-DOTA-LM3 therapy. Two patients achieved complete remission by the European Organization for Research and Treatment of Cancer criteria.