Fine-tuning your Yu-Gi-Oh! Master Duel deck can be tricky, but super rewarding. Finding that archetype you gel with, putting together a deck of your very own and seeing how it fares is why people love this game so much. Except, sometimes, you might be missing some of the cards you need to make your deck shine.

That's where crafting comes in. Master Duel has an entire system that allows you to create new cards, saving you the fuss of opening booster packs. Here is everything you need to know about Yu-Gi-Oh! Master Duel's Crafting.

How To Craft Cards 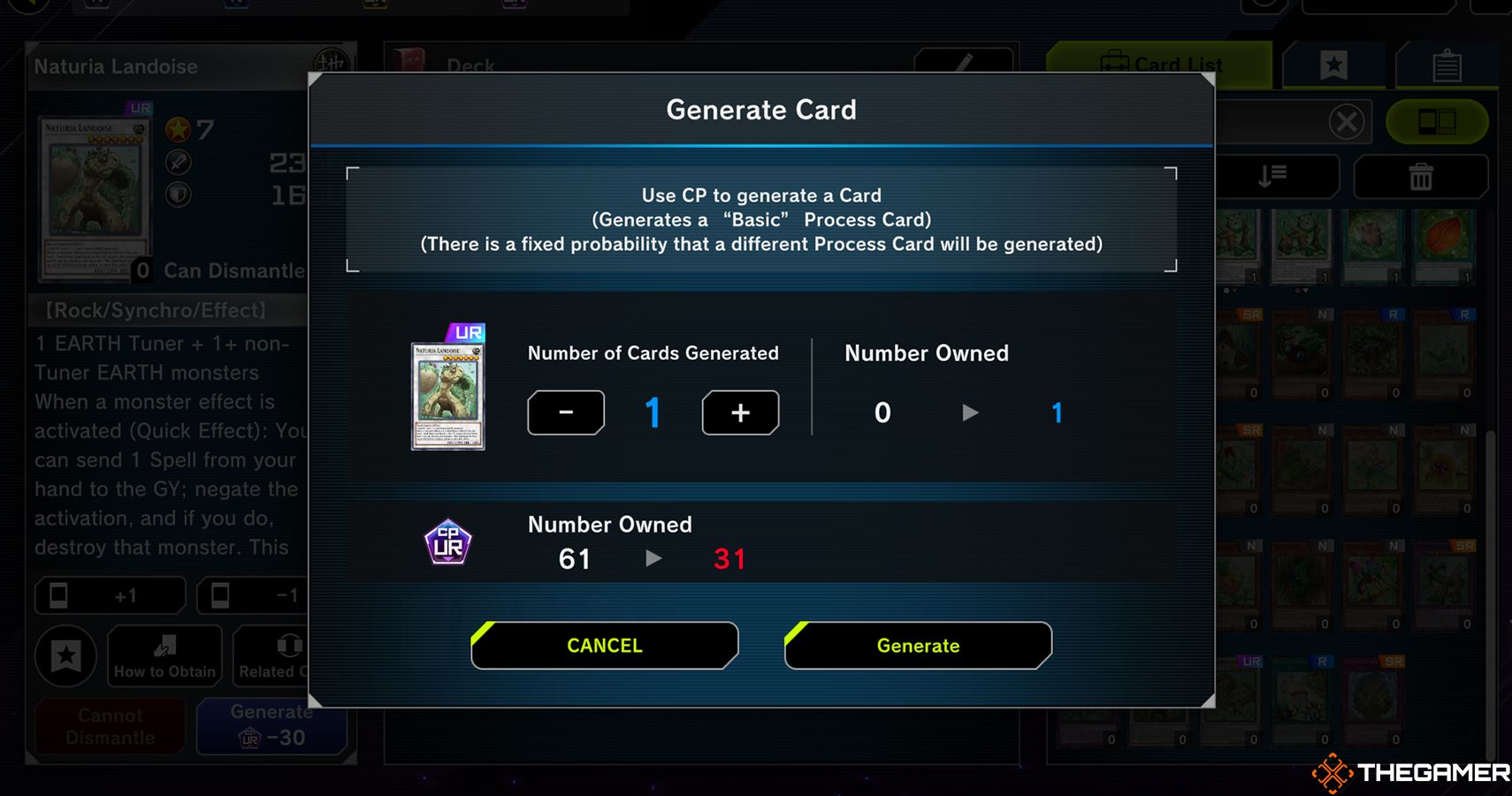 To craft cards, head to the Deck Menu and make a new deck by clicking the first square on the page with a large plus in it. Cards you own will be highlighted on the right side of the screen, but as you scroll down or search for cards, you'll see there are many that are grayed out. These are cards you don't own.

You can craft any card, regardless of how many copies of it you already own. To do so, click on the card on the right side of the screen to open up the card information panel on the left. At the bottom on the right there will be a button that says "Generate". Click that to open the Generate Card window.

From here, you can choose how many copies of the card you want to create, see how many you already own, and see what your remaining Craft Point (CP) balance will be afterwards. Every card in the game needs CP of its own rarity to craft: normal needs CP N, rare needs CP R, super rare needs CP SR, and ultra rare needs CP UR. We'll go over how to get these resources in a moment.

Most of the time, crafting a card will grant you a basic, non-foil copy of it. However, there is a rare chance that a different style, such as a foil, will be made. These types of cards are known as "Process Cards", and sit separate to their basic versions in the card view panel. Keep in mind going to the Generate Card menu through a foil card in the card list won't guarantee you making a foil – it will likely be a basic version, with the same probability of getting another version as any other.

How To Get Craft Points (CP) 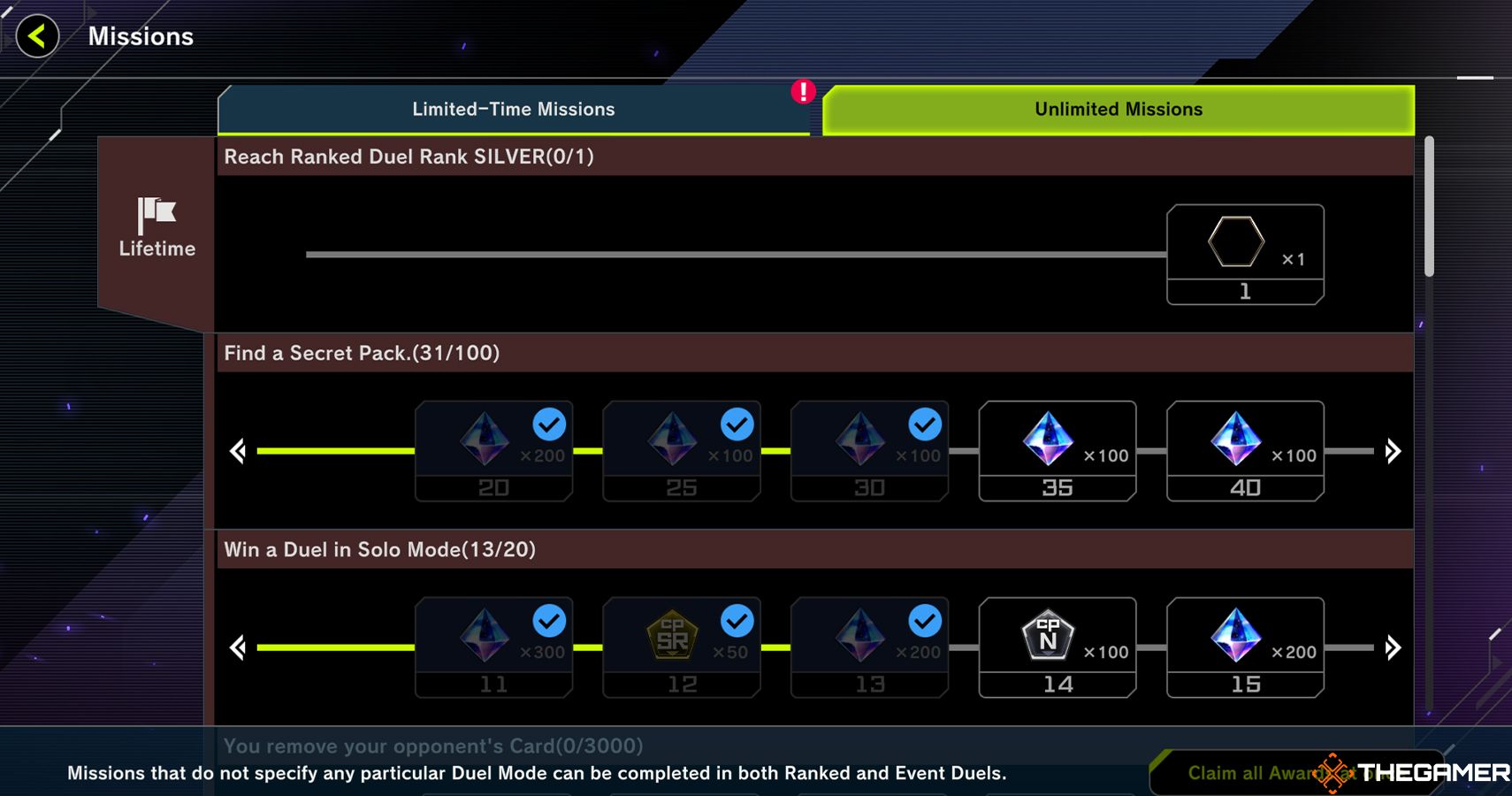 Craft Points are the currency used to generate cards in Master Duel.

There are three main ways of acquiring Craft Points: ranking up the Duel Pass, completing missions, and dismantling cards.

The Duel Pass is Master Duel's take on a Battle Pass. As you complete duels and level up, you'll progress through the Duel Pass and unlock various rewards. Though cosmetics and gems tend to be the most interesting rewards on the pass, there are also a lot of Craft Points of each rarity on offer. As you play, you'll unlock more and more levels and get more craft points.

The final way is by dismantling cards. Back in the deck menu, next to the generate button, there is a red button that says "Dismantle". By clicking this, you can deconstruct cards you already own and break them back down into their Craft Points. You won't get as many Craft Points from dismantling as you'd spend on generating a card, but it's a good way to turn those excess cards you don't use into stuff you'll actually play with.

A great thing about Master Duel is there's no limit on the number of decks a card can go into. That means, generally, you won't need more than four copies of a card. Deconstructing anything above the four copies of each card is a good habit to get into, as otherwise they'll be sitting uselessly in your collection. Also, dismantling special Process Cards will net you more Craft Points than a basic one.

Should I Craft Or Open Booster Packs? 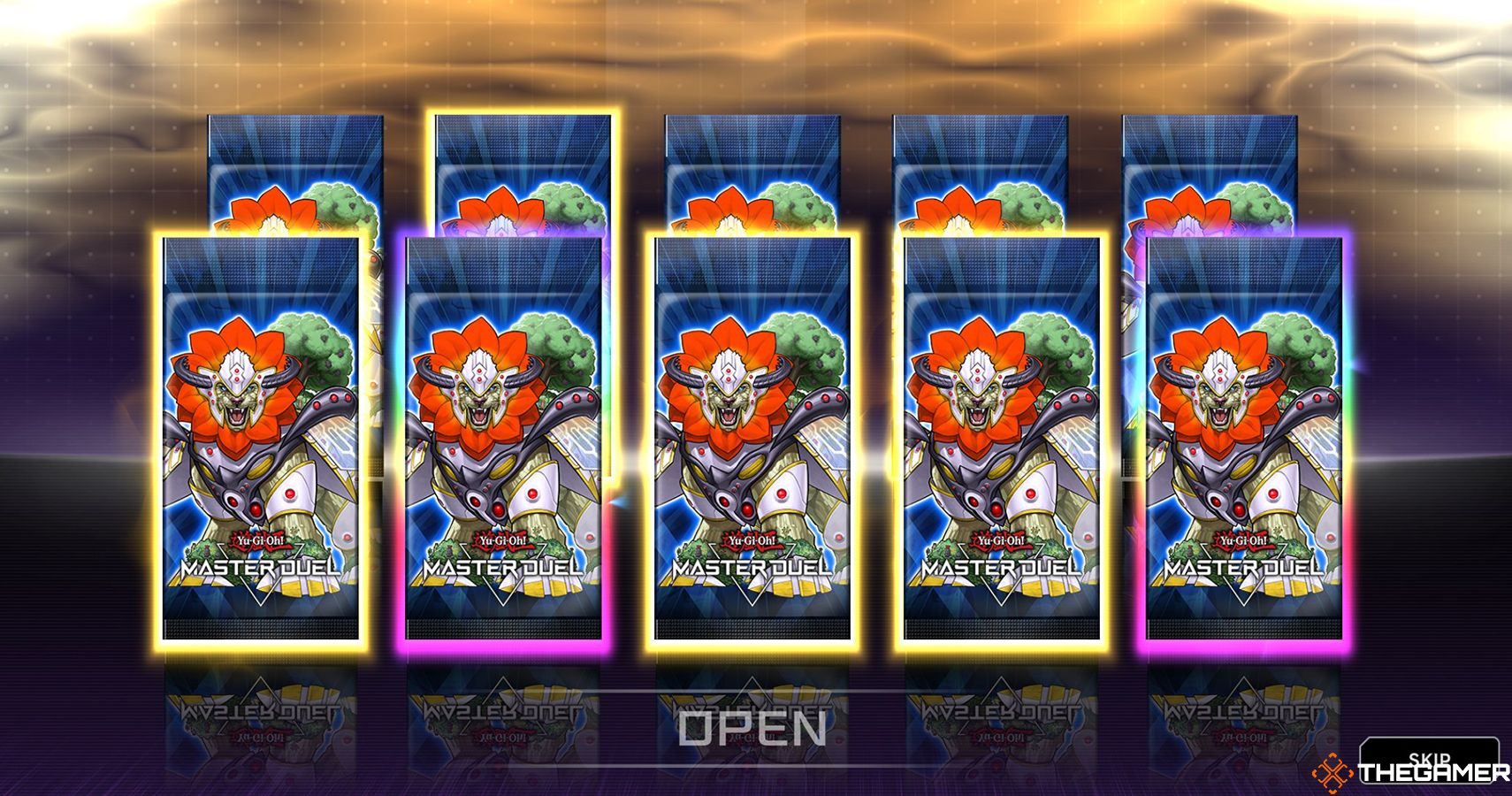 In general, it's good to save your Craft Points for when you only need a few more cards to complete a deck (or if you want to unlock a Secret Pack).

Opening booster packs adds an element of randomness to your deckbuilding, but with things like Secret Packs to help you narrow in on the deck you want to build, you shoiuldn't really have to use your Craft Points to make the majority of a deck.