You are here:
Home / Yu-Gi-Oh!: How To Play Swordsoul

Yu-Gi-Oh!: How To Play Swordsoul

Swordsoul instantly took the Yu-Gi-Oh! TCG metagame by storm when the bulk of its cards hit the shelves with the Burst of Destiny core booster in 2021. The Swordsoul mechanic of special summoning monsters which then generate tokens for Synchro Summons makes many people refer to them as one-card Synchros, and while this isn't entirely accurate, it represents how well the deck can turbo out multiple powerful Synchro monsters from very little resources.

Although most are attracted to Swordsoul for its power in the game, the cards also look impressive on the tabletop. The Swordsoul archetype features armor-clad warriors with massive crystal swords. If that wasn't badass enough, its monsters are also named after legendary Chinese swords from real life.

Although their identities are tied up with their swords, each Swordsoul monster is (weirdly) a Wyrm-type. The strategy makes full use of this, with many Swordsoul effects being able to target or make use of any Wyrm-type monster where other archetypes would mention only in-archetype cards. For example, Swordsoul Emergence is a generic searcher spell for the deck. However, if you control a Synchro monster it can search for any Wyrm-type monster instead. This means that the deck synergizes very well with other Wyrm strategies – but more on that later.

The Swordsoul deck contains three main combo starters: Swordsoul of Mo Ye, Swordsoul of Taia, and Swordsoul Strategist Longyuan. They can each summon a token in different ways – for example, Mo Ye summons a token when it's summoned by revealing a Swordsoul/Wyrm-type card in your hand. These token-summon effects lock you into Synchro monsters while they're on the field, so if you happen to be playing other Extra Deck types make sure you Synchro off your tokens first! You are further incentivized to Synchro Summon with your tokens by the secondary effects of these three starters: each, when used as Synchro Material, will generate some kind of advantage, e.g. Taia allows you to send a Wyrm from your deck to the Graveyard.

Mo Ye and Taia are both level-four, and summon level-four tokens, so a normal/special summon of either gives you material for a level-eight Synchro monster. Fortunately, the archetype's key boss monster, Swordsoul Grandmaster – Chixiao, falls into this category. Chixiao gives you a monster negate, and can also search any Swordsoul card (not just monsters!) on its summon. Although there are many excellent options for this search, a lot of the time you'll be picking up Swordsoul Blackout. This is a trap card that allows you to (target and) destroy one Wyrm you control and two cards your opponent controls. So, from a single card, you have set up a monster negate and a double-destruction on your opponent's turn. That's pretty good, but it doesn't stop there.

If you have a way of getting a copy of Longyuan in your hand you can set yourself up for an additional level-10 Synchro play. Activate Longyuan in hand, discarding a Swordsoul or Wyrm card for cost, to special summon it and a level-four token to your field. Since Longyuan is level six you can now summon a level 10 Synchro – and, due to Longyuan's effect in the Graveyard, you can burn your opponent for 1,200 damage in the process. The deck has three main level-10 options here: you could keep it simple and go into Baronne de Fleur, giving you an omni-negate as well as a destruction effect. The destruction isn't a quick effect, however, and so it's unlikely to come up if you're going first (which you should be!).

Another option is the most recent addition to Swordsoul's arsenal: Swordsoul Sinister Sovereign – Qixing Longyuan. This doesn't have the negation power of Baronne, and it only has 2,900 attack, making it easier to beat over given the popularity of 3,000 attack monsters in Yu-Gi-Oh. What it lacks here it makes up for in disruption.

Qixing Longyuan has two disruptive quick effects. First, when your opponent special summons a monster, you can banish it and inflict 1,200 damage to your opponent. Second, when your opponent activates a spell/trap card or effect you can do the same thing, banishing that card and dealing 1,200 damage. This effect damage is going to build up very quickly — especially when coupled with the 1,200 damage inflicted from Longyuan's effect when used as Synchro material — but the real threat here is the ability to banish your opponent's key cards.

Sometimes, a single combo piece being taken out of the game can spell disaster; imagine banishing your opponent's only copy of Meteonis Drytron and locking them out of Ritual Summons for the rest of the game! Moreover, banishing a Continuous Spell/Trap or a Field Spell when it's activating its effect will stop that effect from activating, since these cards need to be on the field to resolve their effects. Although it's tempting to banish the first thing you see, it's often better to wait for that all-important choke-point or key card.

If you want to close out a game you can also make Swordsoul Supreme Sovereign – Chengying, which increases his attack and reduces your opponent's monsters' attacks by 100 for each banished card. Chengying can gain power quickly, especially if you are running Pot of Desires in your deck, as Swordsoul often does. Chengying can also protect itself from destruction by banishing a card from your Graveyard, which triggers its other effect: when a card is banished, you can banish one card each from your opponent's field and Graveyard. This banish is non-targeting, meaning that it can help you deal with pesky Towers-like monsters such as Red-Eyes Dark Dragoon. Although it doesn't have the negation of Baronne, Chengying can be surprisingly difficult for your opponent to deal with if played in the right match-ups. 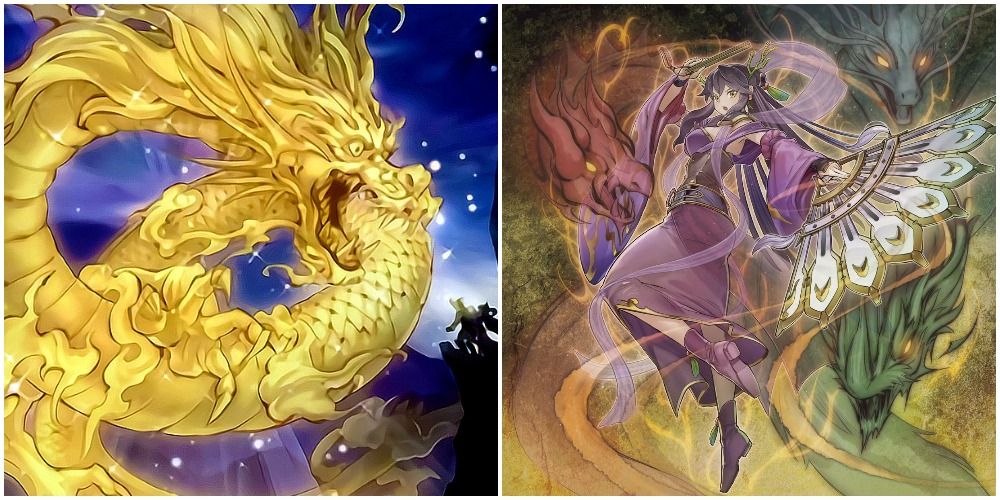 The Swordsoul strategy relies on having access to other Swordsoul/Wyrm cards in hand. As a result, Swordsoul decks are often crammed with as many Swordsoul names and Wyrm-types as possible, while also leaving room for generic staples and hand traps. This limits the number of other engines that can be played in the deck since the inclusion of other cards automatically hinders the deck's consistency. Because of this, Swordsoul does very well as a pure deck.

Some also like to include a small Destiny HERO – Destroyer Phoenix Enforcer package, since it requires minimal Main Deck additions and provides a powerful form of disruption not readily available to Swordsoul otherwise. This, however, has fallen out of favor in the TCG, although it is still a popular option in Master Duel.

By far the most popular variant of Swordsoul, however, is Tenyi Swordsoul. Swordsoul doesn't synergize well with many archetypes, but the synergy with Tenyi is incredible – the Swordsoul and Tenyi cards interact with each other in many subtle ways, and the more you play with the deck the more pleasant interactions you will uncover. For example, having to banish a Swordsoul/Wyrm from your Graveyard to summon a token through Taia may seem annoying, until you realize you can banish Tenyi Spirit – Adhara from your Graveyard to bring the banished card back to your hand! Playing a Tenyi engine within Swordsoul gives the deck an entirely new layer of strategy since you have a new line of play with the Tenyi cards. You can one-card combo into potent Synchro monsters such as Chaofeng, Phantom of the Yang Zing, which can prevent your opponent from activating the effects of LIGHT-attribute monsters. This is perfect for dealing with Nibiru, the Primal Being, or PSY-Framegear Gamma before even starting your Swordsoul plays!