Subtlety is a classic Rogue Specialization. The archetype of fighting from the shadows with poisons has never felt so great. In World Of Warcraft: Dragonflight, Subtlety Rogue has been improved in a few ways thanks to the new Talent Tree System. Access to some fantastic talents not available in the past makes Subtlety an extremely fun specialization to play.

Subtlety is one of the oldest Rogue Specializations in the history of World Of Warcraft. Now, in the age of Dragonflight, it is even more enjoyable and deadlier than ever. New combinations of talents make Subtlety shine in damage, playability, and effectiveness in a fresh new way. 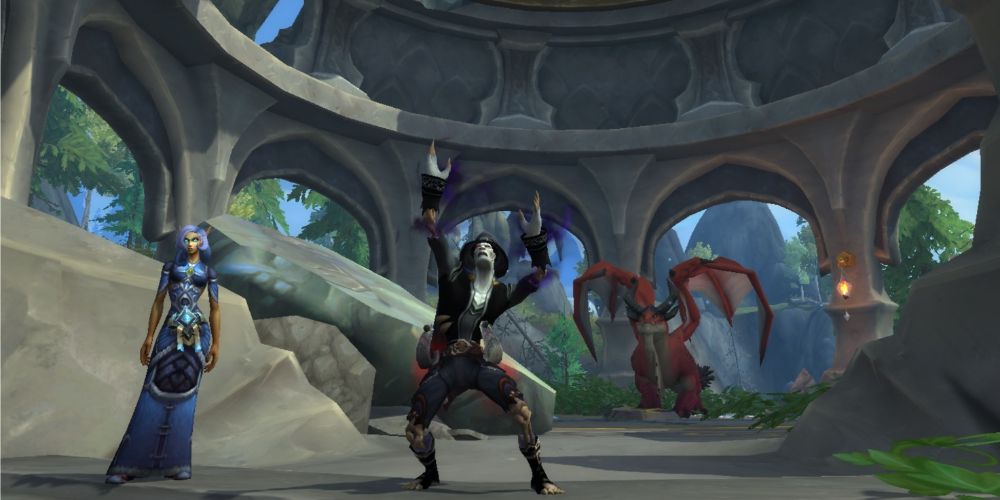 Subtlety is a great choice for Rogues. Here are a few great qualities of this specialization. 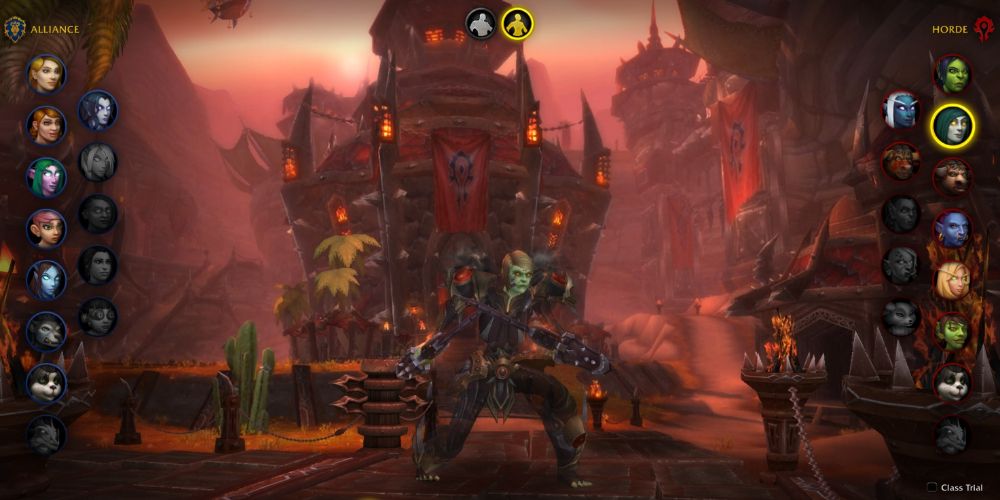 Picking your Race for Subtlety Rogue truly lies in choosing your favorite race. However, some races with Racial Abilities will certainly assist any Subtlety Rogue. Here are some race suggestions that can help Subtlety Rogues in their effectiveness.

These Racial abilities will help Rogues either in damage or mobility. The Horde Races tend to lean more towards damage, and the Alliance Races are more in line with freeing up mobility.

Both certainly have their perks. The Night Elf Racial is great when you want to disappear from the enemy and return to your Rogue's Stealth Ability to use Stealth-only Abilities again in combat or escape the fight.

Ultimately, picking your race should come down to what you think fits best for your character or which race is your favorite. It is all about having fun, so if you aren't sold on any of the suggested Racial Abilities, then feel free to pick your favorite Race for Subtlety Rogue. 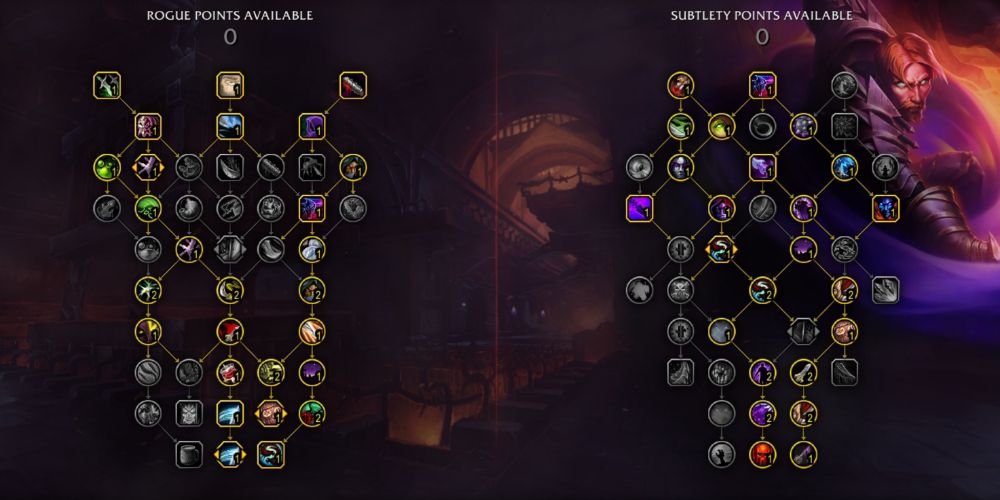 During your adventure from level 60 to 70, you can explore some great options in the Talent Tree. In fact, the Talent Tree isn't extremely important as you level, but it is a great time to learn the ins and outs of this class as best you can. That being said, there are a few Talents that every Subtlety Rogue will want in their Tree, especially as you level.

If you like pulling lots of mobs on your adventure to max level, then you will certainly need Black Powder, Secret Technique, and Improved Shuriken Storm in your tree.

If you are a Single Target type of player, then Echoing Reprimand and Soothing Darkness can prove extremely effective.

There are a few other mentionable Talents and Abilities to be aware of.

The major Talents for any Subtlety Rogue are Dark Shadows, Dense Macabre, and Shadowed Finishers. These will all significantly increase your damage. These three play off each other, and you will see your Critical Numbers fly with ease.

While you are leveling, do your best to explore the Talent Trees and find what works best for you. You may even discover a unique build along the way that may end up being completely overpowered, so exploring the Talent Trees' abilities is highly beneficial.

The bright side of this new complex Talent Tree System is that you can change your Talents at any time, and this will allow you to explore and discover new builds with ease. 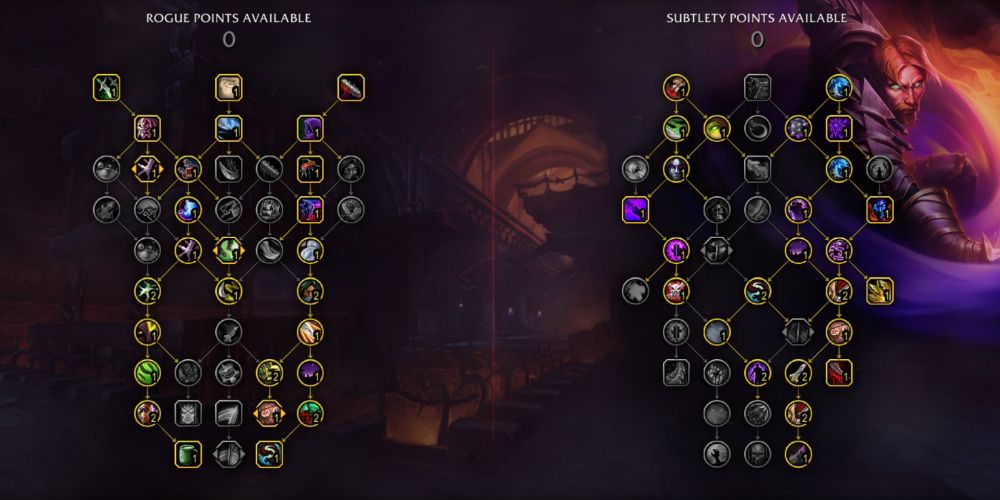 In Mythic +, AoE and Cleave are so important to make sure you finish the dungeon in the allotted time. This Talent Tree is terrific for just that. With just the right amount of Single Target and AoE abilities, you will find it highly effective. The highlights of this AoE/Cleave build come from the right side of the tree.

Improved Shuriken Storm, Black Powder, Silent Storm, and Secret Technique will be your cornerstone Talents for a great AoE/Cleave Build. That being said, there are some other notable AoE Talents to choose from.

Replicating Shadows and Shuriken Tornado will be the icing on the cake for your AoE damage. These will increase your overall damage from Rupture by applying it to an additional nearby enemy, and you will release Shuriken Storm every second for the next four seconds.

The best part about this build is it has great Single Target Abilities as well. The most important moves here are Shadow Dance, Finality, and Flagellation.

This build is great for Bosses and Mobs, and you will find it highly effective and fun. 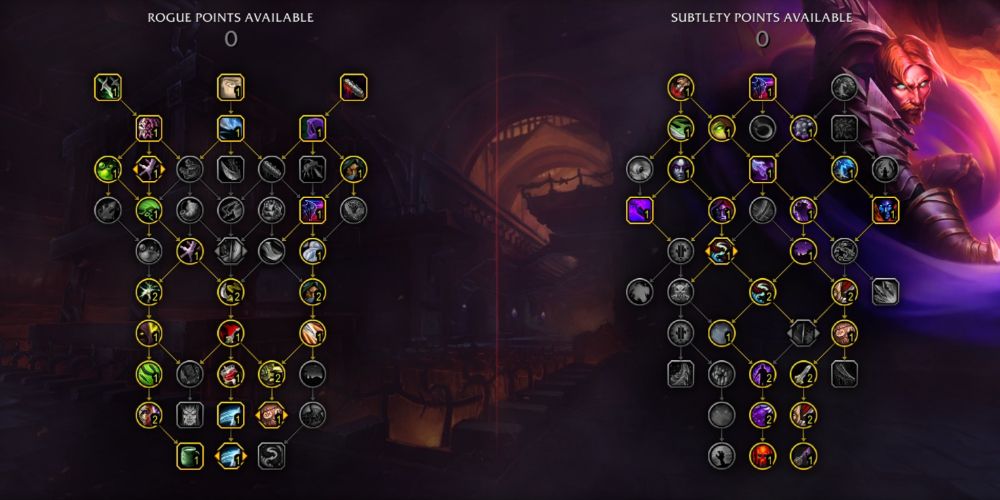 You will quickly find that using Shadow Dance in combat will change your Action Bar from your Normal Action Bar to your Stealth Action Bar. You will need to tailor both action bars to be functional during combat, so you can use everything you need to when you want to dish out the most damage. Some other great Talents to consider are:

In Raids, you will be building toward a Single Target Talent Tree. Make sure you can dish out as much damage as possible by spending any Talent Points on Single Target damaging Talents. So, Talents such as Improved Shuriken Storm and Black Powder will not be very effective here. These showcase the most powerful Single Target Talents you will want to choose alongside Dense Macabre.

You will find that a lot of these Talents play off of the Shadow Damage increase and the play of gaining Combo Points as fast as possible. Seeing how Dark Shadow and Dark Brew together increase Shadow Damage by 40 percent is remarkable. This will be your knife in the dark for those big boss fights. 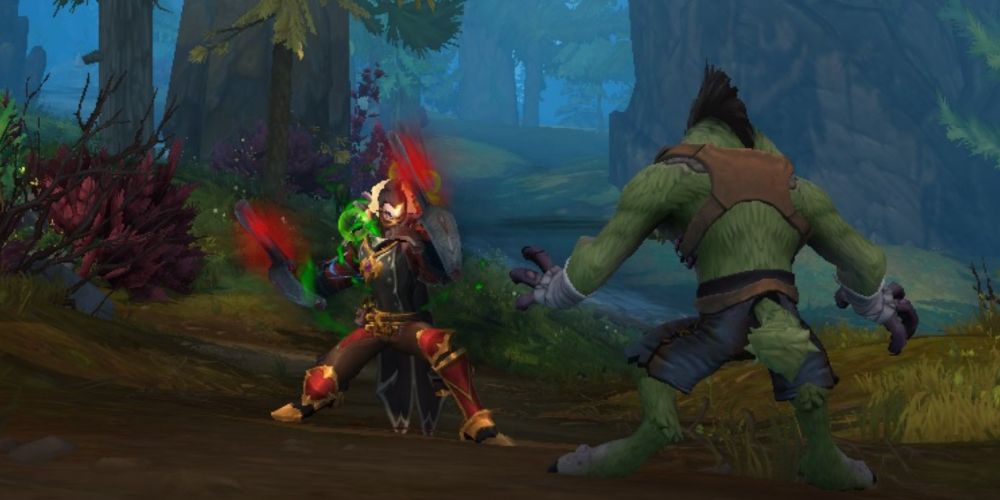 The rotation for Subtlety may differ slightly if you are Single Target or AoE/Cleave in your build. Regardless, you will need to stay on top of what Abilities are active and which ones are not to make the most of your damage. Subtlety usually thrives off of Shadow Dance so being on top of your Ability choices when this is active is key.

Alongside this, being aware of your positioning to the enemy will be of paramount importance when it comes to Backstab and Gloom Blade. You will want to make the best use of Find Weakness, which both of those apply when behind an enemy. So on top of managing your rotation, you will also need to be aware of your position in relation to your target.

Not taking into consideration the times you will need to use interrupts, your rotation will roughly look like this from Stealth:

Much like Outlaw Rogue, Subtlety doesn't have many Macros. There is one that can prove to be quite useful. It will cast Shadow Blades and Symbols of Death together. That being said, you will also want to have them on your bar individually to use them on their own when needed since they don't share a cooldown. You will mainly use this macro when starting fights. The macro will look like this in the Macro Command Screen:

Feel free to choose whatever Icon and name you wish for this macro. You may want to pick a unique one since you do not want to get it mixed up with each individual ability. Another great rogue macro is for Tricks of the Trade if you decide to Talent into it. The Macro Command looks like this:

This is a terrific Macro for any high-end gameplay. This macro will require you to Focus Target the Tank. The Ability will send any aggro you cause to go to the tank, which is a plus for everyone.

Macros can be difficult to make. If you need assistance creating them, check out our dedicated guide. 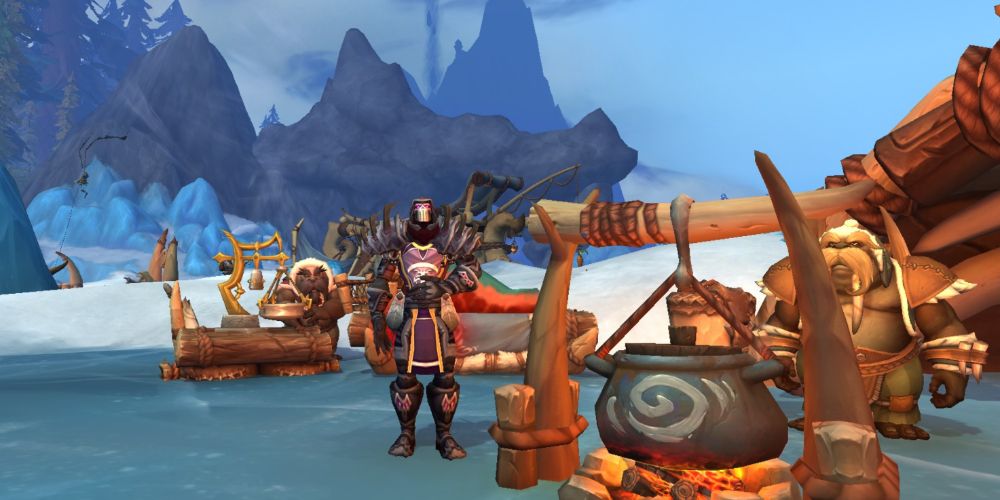 If you are running your AoE/Cleave Build, you will want your Stat Priority to be:

You will want to keep your stats in this priority order, but you do not want any single stat to fall behind. They are all beneficial for any Subtlety Rogue Build and play.

Diminishing Returns are important to keep in mind. Any Stat above 30 percent will take penalties on their continued effectiveness.

Keeping in mind that Enchants will differ on Crafting Tier, you will need to top off your Rogue with the most beneficial Enchants.

The best Phials for Subtlety Rogues are the Phial of Elemental Chaos for Single Target and Phial of Glacial Fury for AoE and Cleave fights. The first will grant you a boon that changes every minute; these boons will increase a secondary Stat by 552 and a bonus effect.

The Phial for AoE will give you a stack of Glacial Fury for 15 seconds and can stack five times. Damaging Abilities have a chance to deal damage split among nearby enemies. Each stack increases its power by 15 percent.

The Refreshing Healing Potion will be the top choice Health Potion. You may also like to have a Potion of Withering Vitality, but this will apply a DoT for the same amount healed over 15 seconds, so make sure to use your Cloak of Shadows to get rid of this DoT if you use this.

The Buzzing Rune will be the best choice for weapon buffs. This will increase your Critical Strike Rating for two hours.

Your Food Buff choice is Revenge, Served Cold, which increases your Critical Strike and Versatility by 45 for an hour. This will be the best personal food you can get. 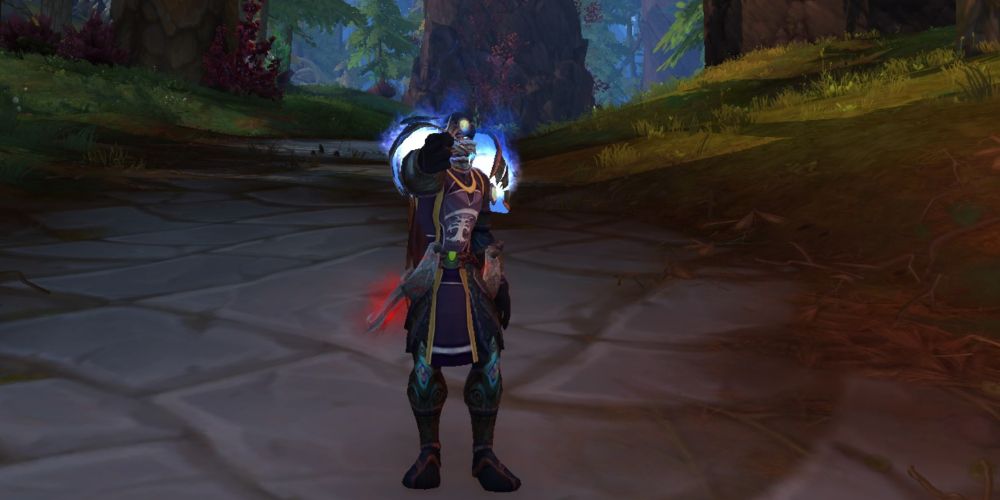 As you level, gear will be handed out left and right. Making sure you do as many quests as possible and kill Rare Spawns when you find them will ensure you stay geared on your adventure to 70. If you participated in Raids and Mythic + in Shadowlands, you might not have to replace your gear till about level 65.

Since you are a Leather Armor wearing Rogue, you may want to pick up Dragonflight Skinning and Leather Working Professions. As you level this profession up, you will be able to craft yourself some pretty remarkable gear. If Professions aren't your thing, don't hesitate to spend a little gold at the Auction House to buy some crafted gear if you need those extra Item Levels.

In preparation for Season One of Mythic + and Raids, your best bet is to run Heroic Dungeons, Kill World Bosses, and Crafting. The Crafted gear will help you get a high enough Item Level to run normal dungeons, so then you can run Heroic Dungeons. The World Bosses are a roll of the dice since you never know if they will drop what you need. By running dungeons and working your way to the Heroic difficulty, you can get geared in no time. For now, this is the best gear for Subtlety Rogues and where to loot these gear pieces.