You are here:
Home / Why now is a great time to start playing HeroQuest

Why now is a great time to start playing HeroQuest 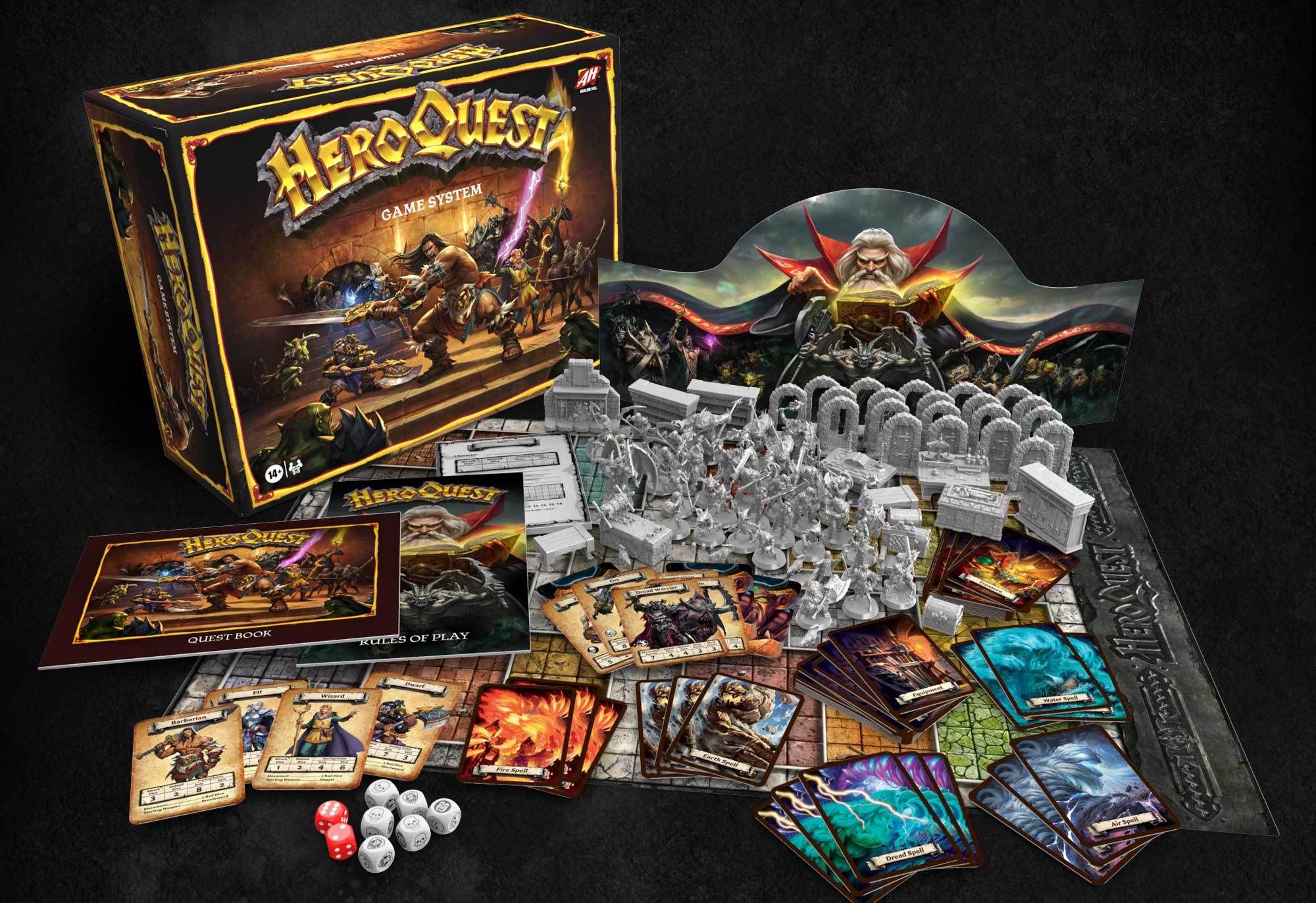 GameCentral looks at the legacy of 90s classic HeroQuest, including the upcoming remake and more modern alternatives.

I never regretted choosing Space Crusade over HeroQuest, while selecting a birthday present from the shelves of Beatties toy shop in Lewisham circa 1990. HeroQuest will always be the definitive dungeon crawler; it’s like Dungeons & Dragons lite, a self-contained role-playing adventure in a box. The rules are already set out, making the world of fantasy more inclusive and accessible, and anyone can play it, no matter their experience.

Back in the 1990s HeroQuest defined the genre but it’s getting a refresh this year, along with some other more modern monster releases. So there’s no better time to lay down those tiles, avoid any traps, and loot that treasure.

First released in 1989, HeroQuest was always promoted as a Dungeons & Dragons style adventure game. Morcar is the Dungeon Master and whoever plays him leads the game; as you play the dungeon is revealed piece by piece but on a single board, not a modular tile system. Up to four other players take on the stereotypical fantasy characters of elf, wizard, dwarf, and barbarian and play out fantasy scenarios from the included scenario book – or make one up using the blank map at the back.

By creating HeroQuest, Milton Bradley and Games Workshop managed to introduce wargaming to a whole generation of kids. It was a mainstream product, appearing in most high street toy shops and advertised on Saturday morning TV. Games Workshop, who designed the miniatures, relied on HeroQuest being more than just a game and used it as a gateway to introduce unsuspecting players to the pleasures of tabletop gaming and high fantasy.

It was the miniatures and cardboard furniture that made HeroQuest appealing to a wider audience. These miniatures tend to be the main aspect of the game people remember, as they weren’t overly complex and are still instantly recognisable. The final room of the game contains a gargoyle, which is featured prominently on the Dungeon Master’s screen and is easily the most impressive miniature in the box.

Most players coveted that gargoyle and it’s part of why the original game is now selling for around £250 on eBay. And if the miniatures weren’t enough to convince to harass your parents for a copy, the live action advert proved this was an adventure you didn’t want to miss.

Just like Warhammer, many players now in their late 40s remember getting their hands on HeroQuest in their early teens and it’s this memory that has made them happy to lay out £150 for modern equivalents, such as the impressively complex Gloomhaven, and why the crowdfunded revamp of the original HeroQuest attracted $4 million in pledges and is now due to ship at the end of 2021.

There were some tense moments and frantic forum discussions though, as it seemed this new version would only be released in the US and Canada, until Zavvi stepped in to distribute in the UK. Pre-orders are already sold out but the hope is that more stock will become available later, because if not it will be joining the PlayStation 5 as the scalper scam of choice on eBay this Christmas.

The remake of HeroQuest is being sold purely on nostalgia and doesn’t include anything new in terms of rules and mechanics. Can you put a price on childhood memories and goodwill? I backed it purely for the new female resculpts of the miniatures, as the lack of female characters in the original was always a sore point. As with any crowdfunded project, there’s also been a promise of expansions and stretch goals and it’ll be interesting to see how these will complement the base game.

Players having to roll attack dice, and then defence dice, in the original HeroQuest was truly revolutionary at a time when most of the games on peoples’ shelves consisted of Monopoly, Cluedo, and Yahtzee but it does seem a shame not to take this opportunity to modernise the rules. There are obviously many who are quite happy with this being essentially a reissue but that’s not going to please all fans.

If you still have your old copy of HeroQuest and would rather play something new instead, last week saw the reveal of the latest offering from Warhammer Quest, called Cursed City. Warhammer Quest began in 1995 as a spiritual successor to HeroQuest, in the same genre of fantasy dungeon crawler but set within the Warhammer universe.

Cursed City has a vampiric theme, which sees players enter Ulfenkarn, a city which has been invaded by the armies of the undead. Stalked by bloodsuckers, necromancers, and living skeletons, you can play as the inquisition style Agents of Defiance to clear the city of its deadly inhabitants. There’s never been miniatures of this quality and detail in a box set before and it works as another useful expansion of the Warhammer universe and audience.

Descent: Legends Of The Dark is another new co-op dungeon crawler for up to four players. The oversized box raises expectations of HeroQuest style 3D terrain and it does not disappoint, but there’s also a companion app to keep the game thoroughly modern. Companion apps are becoming more common as a tool for immersion and interactivity in board games and are often used to cut through the complex admin or provide information on more esoteric rules, such as combining potion ingredients in Alchemists.

Whilst there’re plenty of dungeons crawlers to keep you busy this year, it’s worth remembering that even now HeroQuest’s dice system has never been surpassed. HeroQuest’s legacy is its simplicity and recently it’s been used as a tool in special educational needs classes, for students to improve interaction and co-operation. The best thing about HeroQuest is… it took the three core books of Dungeons & Dragons and made something so complex into something so simple, a true act of genius.