You are here:
Home / Why Do Some People Think Dragon Age Is Set In The Mass Effect Universe?

Why Do Some People Think Dragon Age Is Set In The Mass Effect Universe?

If you ask most people to name a BioWare game, they'd say "Ew, you're a gamer? Get away from me nerd!", but if you asked a fellow gamer to name a BioWare title, chances are you'd hear either "Mass Effect" or "Dragon Age" in response. Neither of those are BioWare's most recent game (remasters aside, it was Anthem), while the studio also made Knights of the Old Republic, Jade Empire, Neverwinter Nights, and Baldur's Gate. It's quite a legacy, but the DAME years came when BioWare supercharged its reputation and heralded a new dawn of video games. A dawn that, ironically, crushed Andromeda under the weight of sprawling development cycles and sky-high expectations. Dragon Age and Mass Effect are more closely related than just sharing a studio though – they might also share a universe.

The theory, underpinned by a few Easter Eggs and lots of imagination, proposes that Thedas is but a planet in the Mass Effect universe. We know that planets not considered advanced enough are left alone while the Reapers invade – Javik recalls when the Salarians were barely sentient creatures without language who ate flies. The threshold for 'advanced' seems to rely on space travel. Dragon Age's planet has not mastered space travel, so despite their sentience, culture, and intelligence, the creatures who dwell there are but specks in the galaxy.

First off, there is a krogan in Dragon Age and an ogre in Mass Effect, which feels like a pretty firm tie – albeit both are blink and you'll miss it references. A krogan head is on display in the Winter Palace in Dragon Age Inquisition, while you'll find an ogre statue during Kasumi's loyalty mission in Mass Effect 2. We also hear a Mass Effect character say "Thank the Maker," on Eden Prime, a common refrain on Thedas. Finally, and might I suggest most compellingly, is the theory Dragon Age takes place on the Presrop. In Mass Effect, Presrop is one of Klendagon's moons and you can briefly land on its surface, seeing a distinctive rift in the sky. When looking up at night in Dragon Age: Origins, that same rift can be seen. 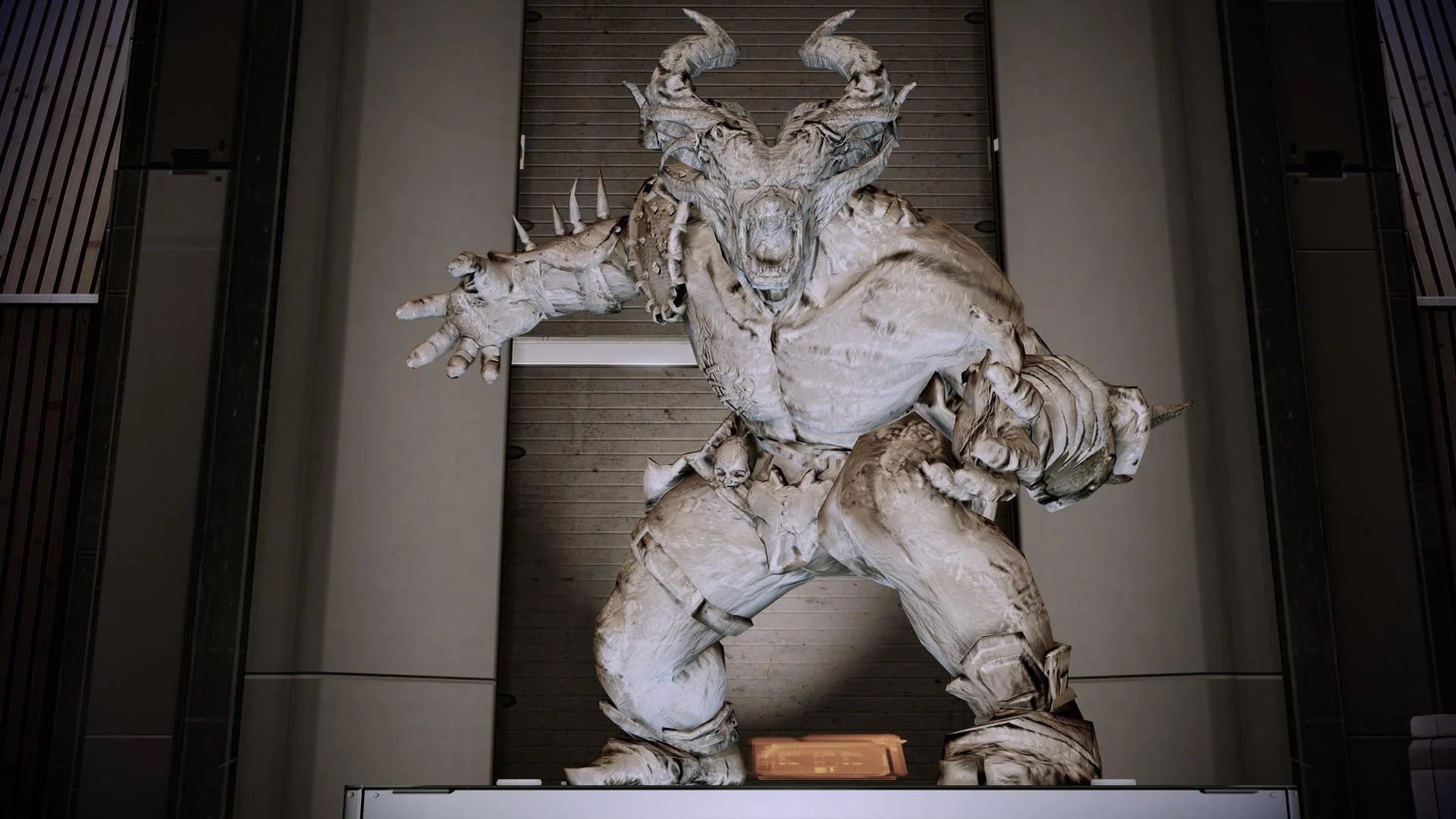 Some fans will of course argue that this is not true, and just cute references rather than interconnected storytelling, but there are several layers of truth and untruth here. Elves are not real. Dragons are not real. Asari are not real. Turians are not real. Humans… well, they're real, but they didn't go to Mars and find alien ruins and suddenly find themselves at the centre of the galactic community. Neither Dragon Age nor Mass Effect are real. They are what we in the business call 'fictional'. But within that, there is truth and untruth. It's true, in the false world of Mass Effect, that Garrus is a former cop. It's not true that Garrus caused the genophage – we know that in the game it was developed by the salarians, notably Mordin Solus. However, there is a gap. Does Garrus, for example, like to call his sexual partner 'Mommy' and be walked around on wall fours wearing a leash? The game does not address this, so it is neither true nor untrue. In the minds of most players, it is not true. In the journals of some fanfic pages, it very much is true. You know, so I've heard.

The point is the truth or untruth of this theory is immaterial. It can never truly be proved unless an asari crash lands on Thedas, and can never be disproven whatsoever. How can you prove a negative? It would require the Dragon Age characters to go into space, fly around for a bit, and satisfactorily prove that there are no mass relays – this is obviously never going to happen. If you want to play along though, there is some fun to be had in arguing against the theory that doesn't involve nitpicking. 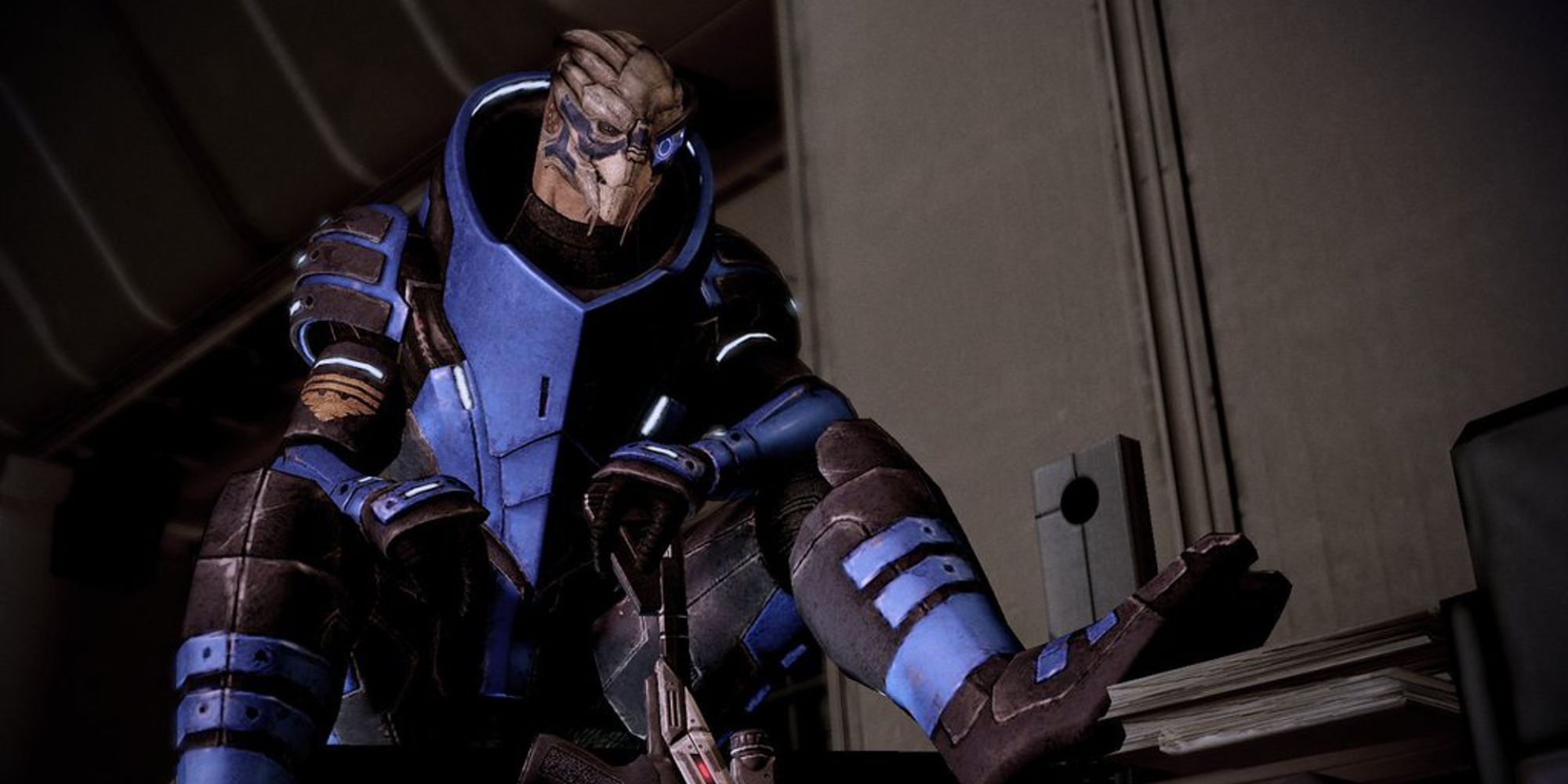 Almost all Mass Effect planets have one dominant species. The hanar and drell share a land, but this is due to planetary destruction, not evolution. Thedas does not have this. Dwarves, humans, qunari, and elves all call Thedas home. There's also the fact that magic is commonplace on Thedas, but it acts differently from biotic powers, which are Mass Effect's version. Also, humans can be magic, when most biotically gifted humans achieve control and power through implants. And, of course, the final nail in the theory's coffin is that it suggests both Thedas and Earth are the homeland of humans – or else both planets evolved identical forms of life and they gave themselves the same name.

So, after all that, is Dragon Age set on a planet in the Mass Effect universe? It's about as real as FemShep parading Garrus around on a leash while he calls her 'Mommy'. Basically, it's as real as you want it to be.