You are here:
Home / Which Magic: The Gathering Planeswalker Are You Based On Your Zodiac Sign?

Which Magic: The Gathering Planeswalker Are You Based On Your Zodiac Sign?

Across the Magic: The Gathering multiverse, powerful mages known as Planeswalkers regularly leap from one world to another. Some are brave heroes, hoping to maintain peace across realities, while others will happily use their rare skill for personal gain. There are even those who don’t care for good or bad, but instead pursue their own goals outside of the petty binary concept of ‘morality’.

With so many personalities calling the multiverse their home, there are bound to be some who you share similarities with. Depending on your zodiac sign, are you a member of the Gatewatch, fighting for what is right? Or are you someone who just wants to see everything the multiverse has to offer? Here are each of the Zodiac signs, and the Planeswalker that best fits them. 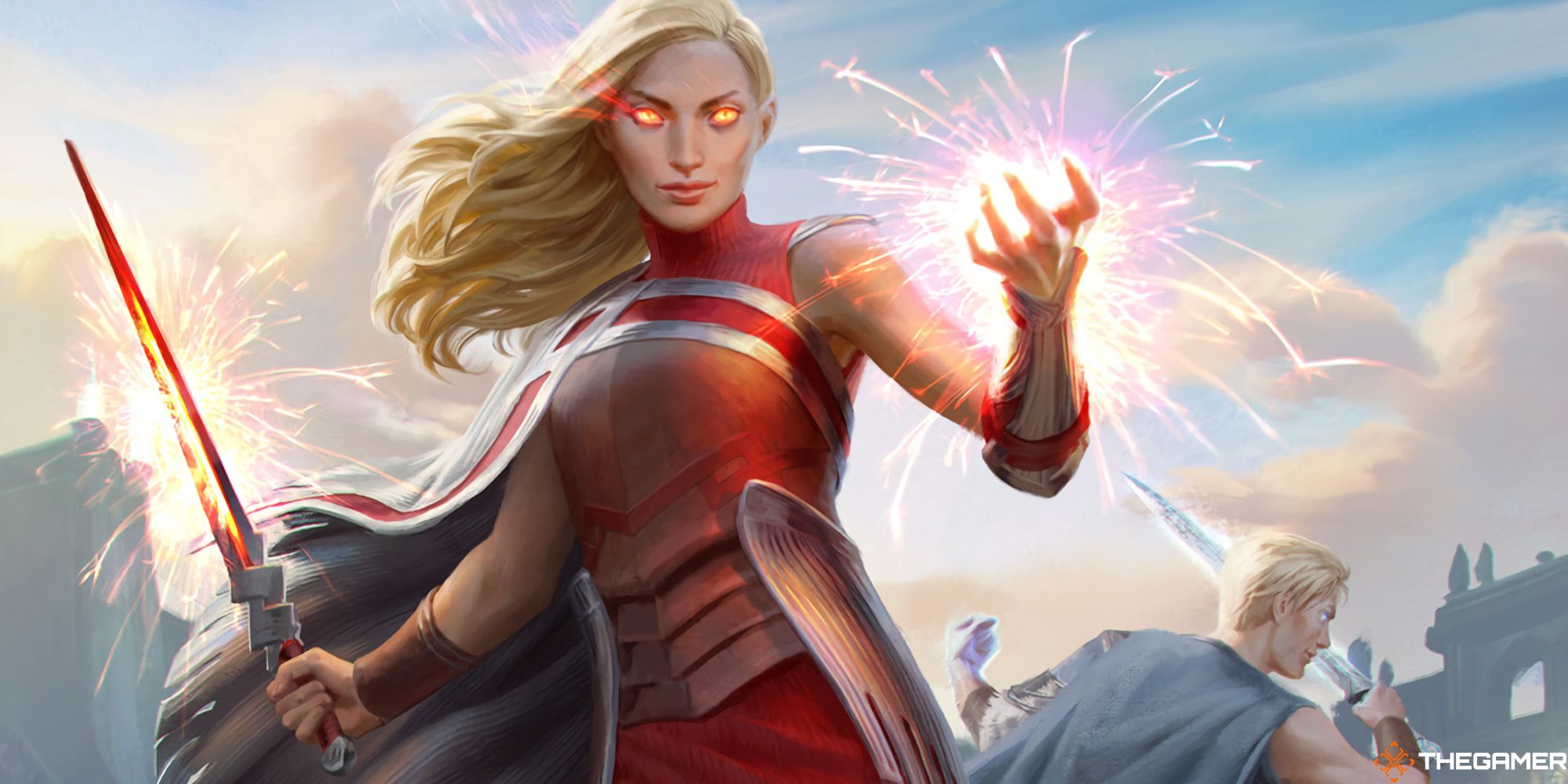 Born as a princess of Eldraine, Rowan struggled under the strict regulations of the royal court. It wasn’t until her spark ignited and she discovered a whole multiverse of possibilities that she began to flourish.

From fighting alongside her brother in the arenas of Kylem, to becoming a prodigy of elemental magic at Strixhaven, Rowan is a fiery, impulsive, and emotional person. She is quick to pick a side, and will happily leap into the fight, but may not think her decisions through as carefully as her brother Will. Like many Aries, Rowan is a perfect example of letting your heart rule, rather than your head. 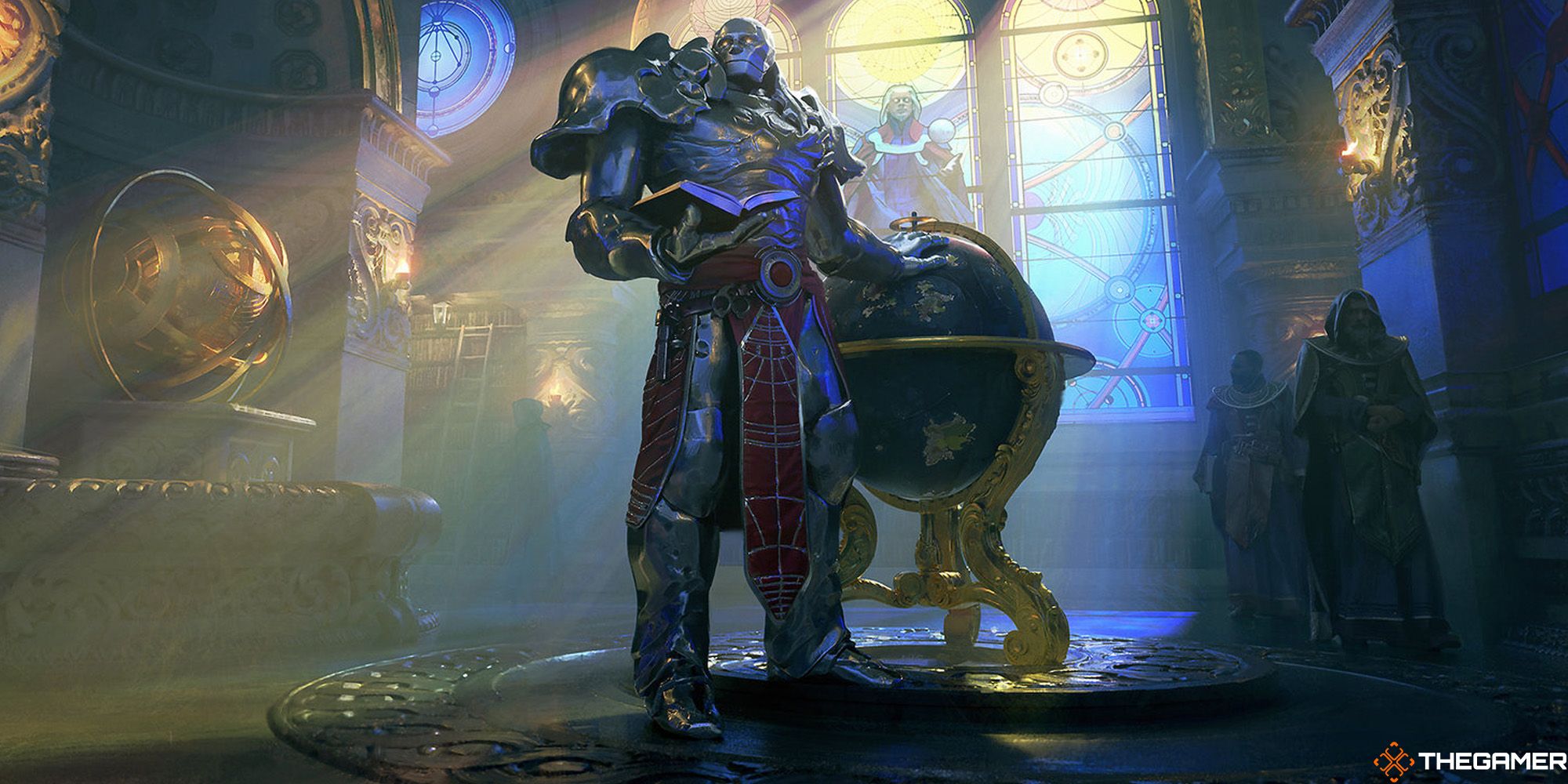 Over his long life, Karn has been through a lot. A silver golem imbued with the spark of his creator, the legendary Planeswalker Urza, Karn has spent most of his time fighting off the Phyrexians. Though the plane he created, Mirrodin, eventually fell to the Phyrexians and become New Phyrexia, he has been a stalwart defender of his home world of Dominaria for centuries.

As he is based in all colours of magic, Karn is a stable and dependable ally, who prefers to play the long game instead of rush in head-first. He cares deeply for those he protects, most notably forming a relationship with the crew of the Weatherlight. Patient and loyal, Karn is the ultimate Taurus. 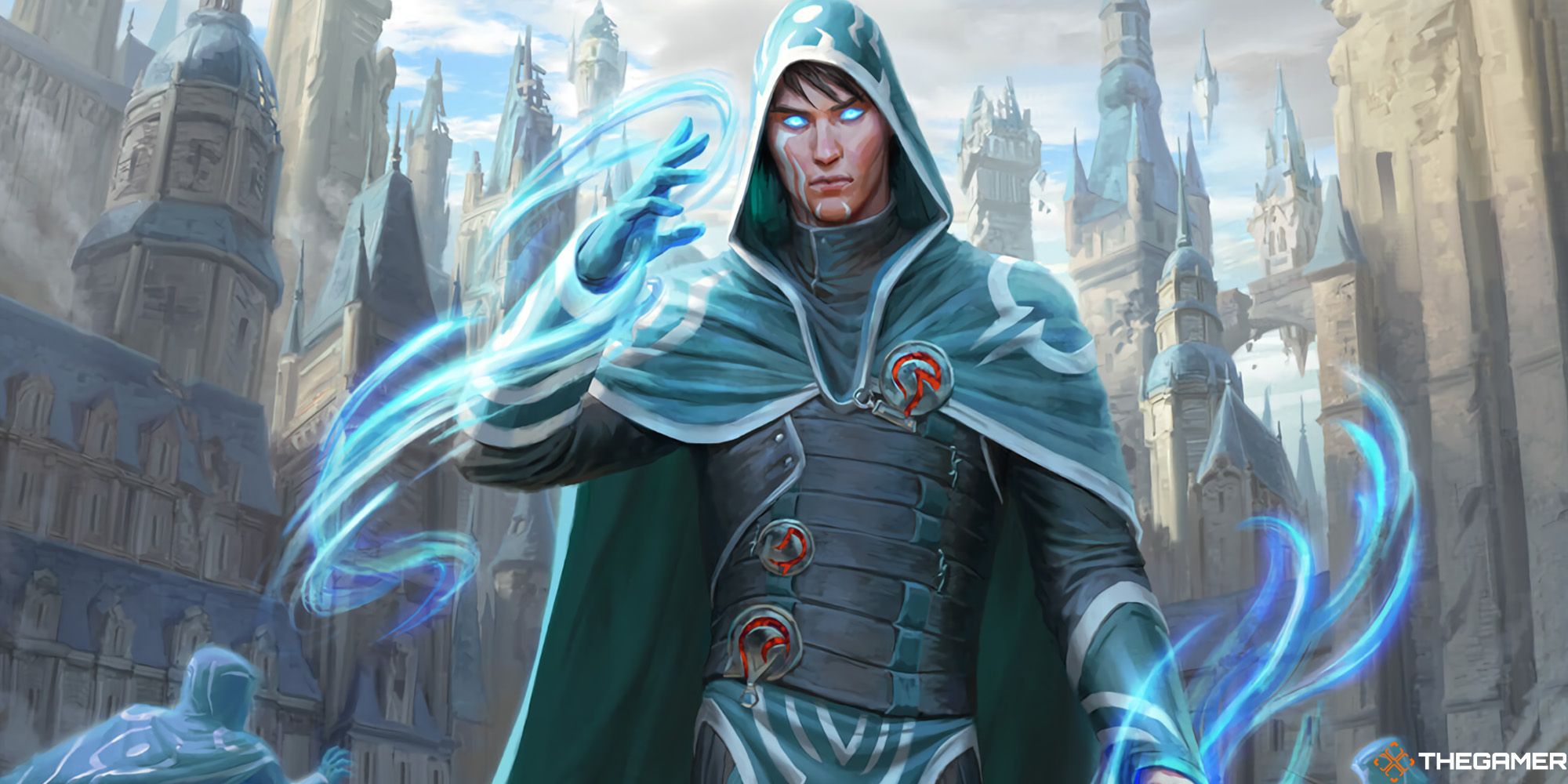 Geminis are defined by their intelligence. Not only are they endlessly curious and have razor-sharp wit, they’re also highly sociable. They love to be around people, and will use their intelligence to help others.

Despite being perceived as the emo poster boy of Magic, Jace fits this down to a tee. The mind mage has an insatiable thirst for knowledge, but also requires an intimate understanding of people to pull off his mental manipulations. As the leader of the Gatewatch, and once the Living Guildpact of Ravnica, Jace could have used his genius and skill in manipulating memories to gain unimaginable power. Instead, he uses it to help others

As an Auramancer, Ajani’s entire magical skillset is based on the souls of others. He can channel the willpower and life force of himself and others to support and heal his allies, both physically and emotionally. He has faced a lot of hardship in his time, including the death of his brother Jazal and his battle with Nicol Bolas in Alara, and yet he still stands by his allies in whatever difficulties they may face.

Ajani may be a huge, hulking lion man, but he is a gentle, well-spoken individual who has spent years learning to identify and control his own emotions. However, his albinism has always set him apart from even other Leonin, meaning he quickly feels abandoned when his friends, such as Elspeth Tirel, are not around. 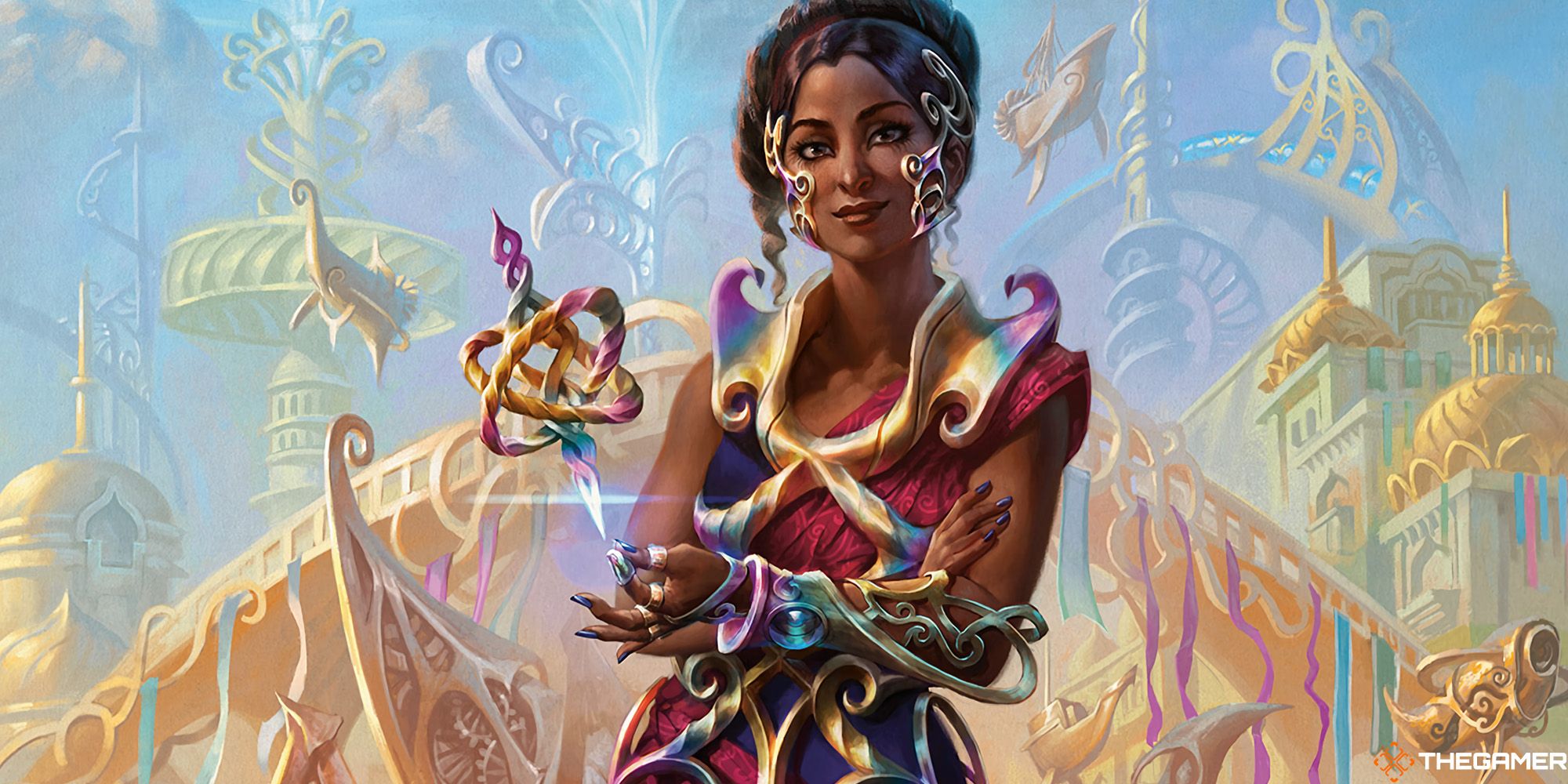 This artificer from Kaladesh loves to be the centre of attention, but does it with an optimism and passion that is infections. While she loves to compete to see who can create the best artificial creatures, it’s out of a love for design and creativity, rather than a need to be better than anyone else.

If you’re like Saheeli, you tend to gravitate towards the spotlight. You sometimes get jealous if the focus is on someone else, but it’s never through malice or a need to put people down – you just love to be the life and soul of the group.

Also originally from Kaladesh, Dovin had the rare ability to be able to look at any system – be it a clock or an entire civilization – and pinpoint the key weaknesses in its design. He was methodical and efficient, but also an obsessive perfectionist.

Unfortunately, Dovin is one of those Planeswalkers who used their powers for evil, serving both for the dictatorial Consulate and Kaladesh, and later assisted the dragon god Nicol Bolas in taking over the plane of Ravnica. While you may have the same, system-centric outlook on life, and always strive towards perfection, maybe don’t become a tyrant who is eventually killed by a gorgon? 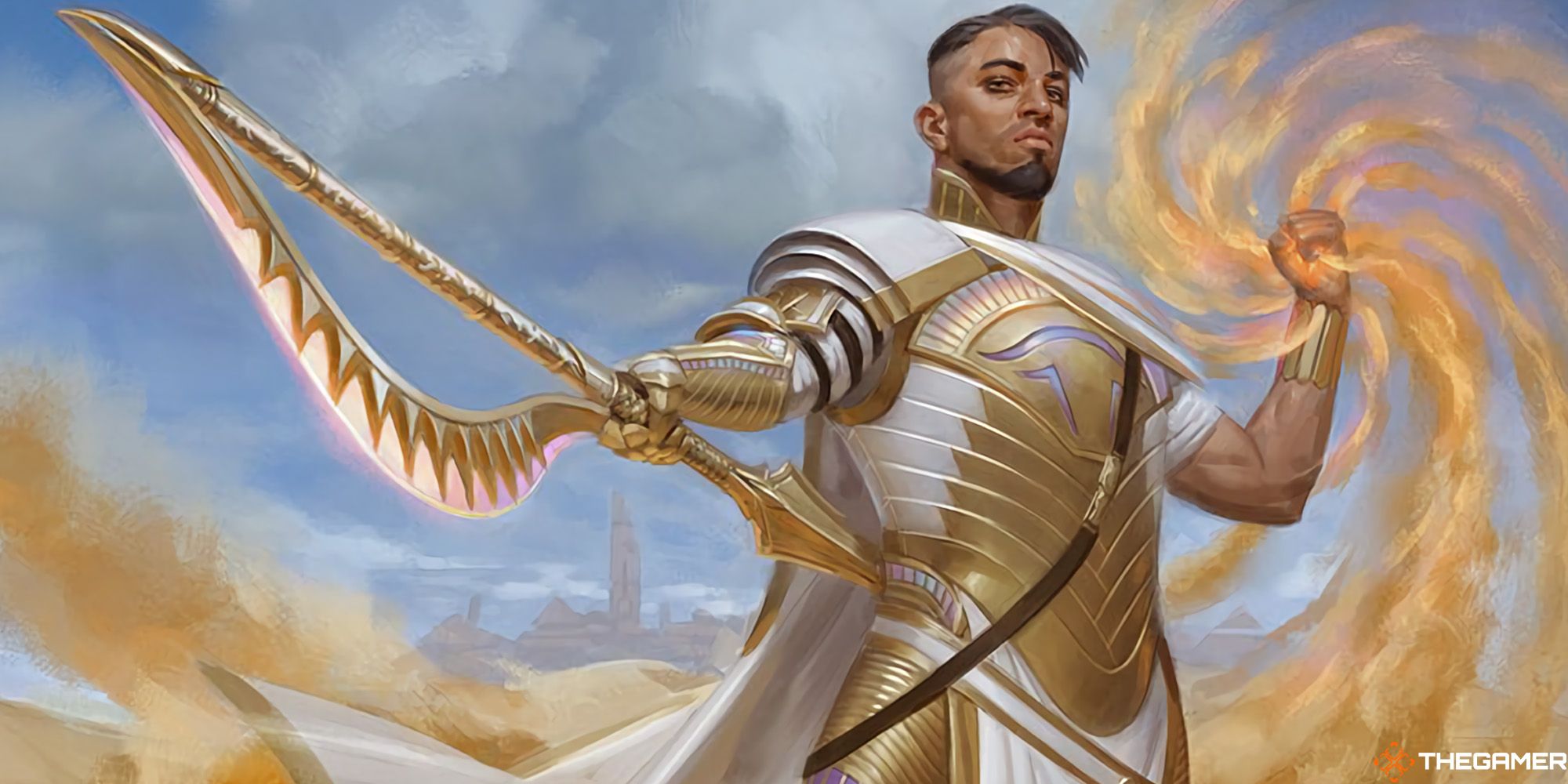 Like Basri Ket, you uphold the principles of fair play and balance, even if it comes at personal cost to you. Basri is one of the few Planeswalkers to have their spark ignite through a positive experience, gaining his abilities when he was honoured after completing a trial set by his god, Oketra.

Of course, this elation didn’t last, as on return to his home plane of Amonkhet he discovered Oketra had been murdered and the world was in ruins. Nicol Bolas had started his plans, and Amonkhet had already fallen. Despite that, Basri rallied, and now devotes himself and his magic to the cause of solidarity – protecting others, bolstering them, and ensuring everyone has a fair and just place in the multiverse. 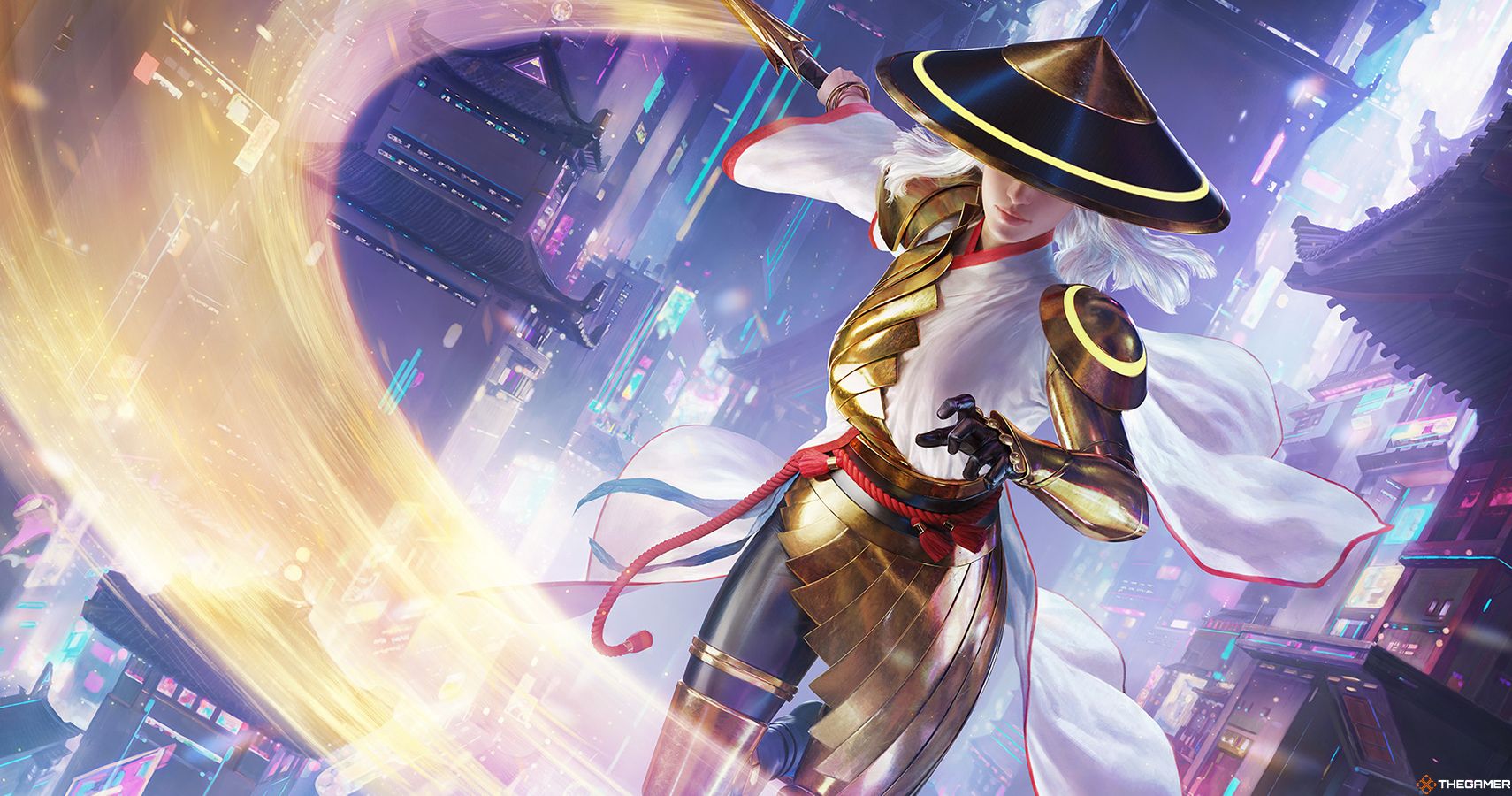 You may not associate The Wanderer with a Scorpio’s traditional stability. After all, her Planeswalker spark was corrupted by Tezzeret and The Reality Chip, meaning she must actively concentrate to remain in any one place.

However, to be thrown across the multiverse and not only retain her deadly skills with a sword, but also the drive to find away back to Kamigawa shows an incredible amount of resolve on The Wanderer’s part. Like Scorpios, she is highly eloquent – she is the emperor of Kamigawa, after all – but also fiercely independent to a fault.

Throughout her tumbling through the multiverse, she never once asked for help until finally arriving back at her home. It was only then that she relied on her closest friend, fellow Kamigawan Planeswalker Kaito Shizuki. 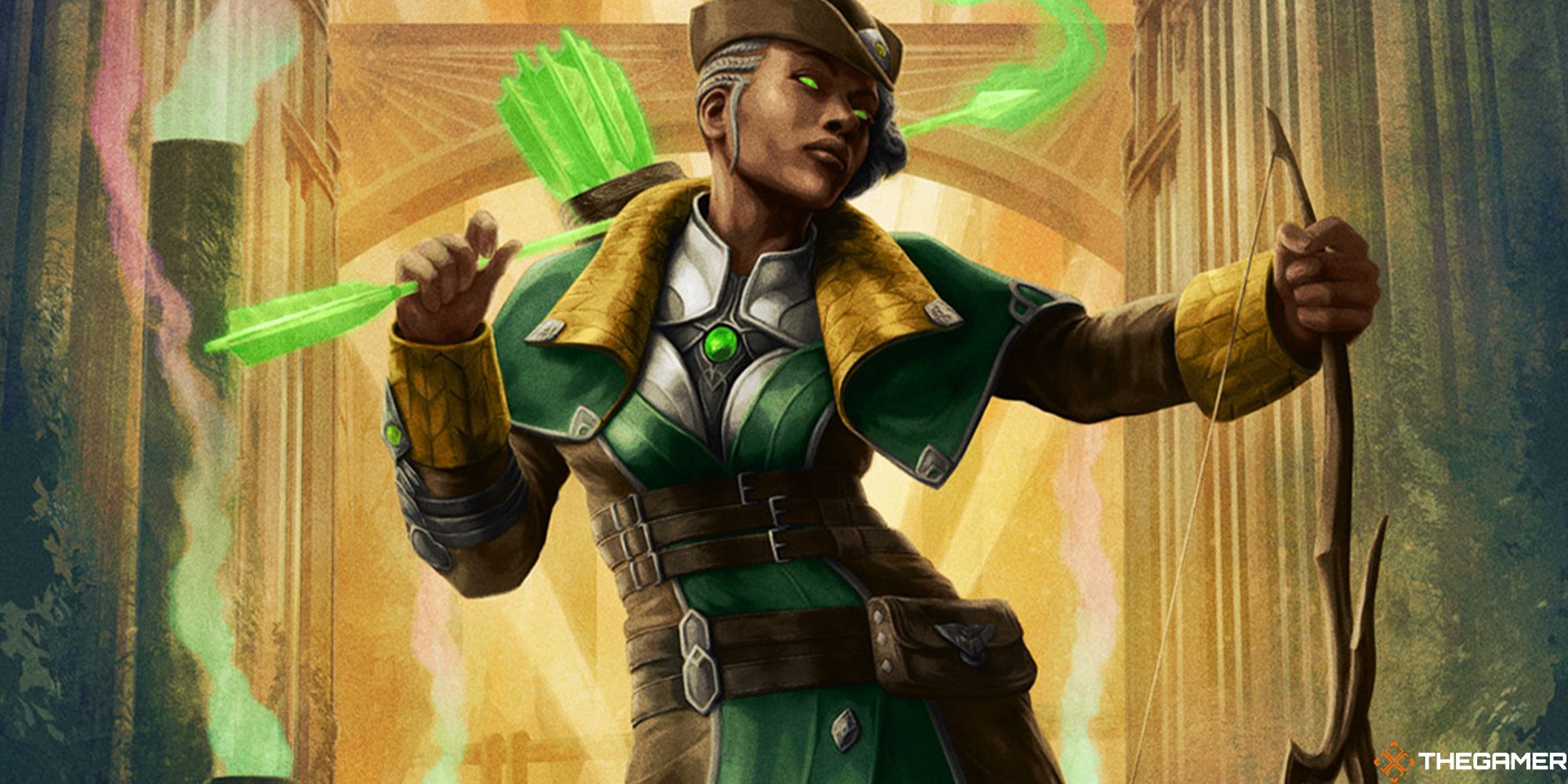 Vivien may seem like an odd choice for Sagittarius. She’s a cold, soldier-like figure who struggles to form relationships with other human beings – a survivor of her home plane Skalla, her weapon is the Arkbow that can channel the few remaining spirits from her world.

However, Vivien has the versatility and drive that define a Sagittarius. She is highly adventurous and felt incredibly at home in the monster-ruled plane of Ikoria where she could easily bond to the creatures she found there. Her quests for the truth had led her down many paths, from getting revenge on Nicol Bolas for the destruction of Skalla to investigating how life can flourish in the artificial city of New Capenna.

Vivien doesn’t bond with other people easily, and often avoids committing to the likes of the Gatewatch if she can. She’s a free spirit outside the confines of human society, but don’t let her demeanour fool you: she is as Sagittarius as it comes. 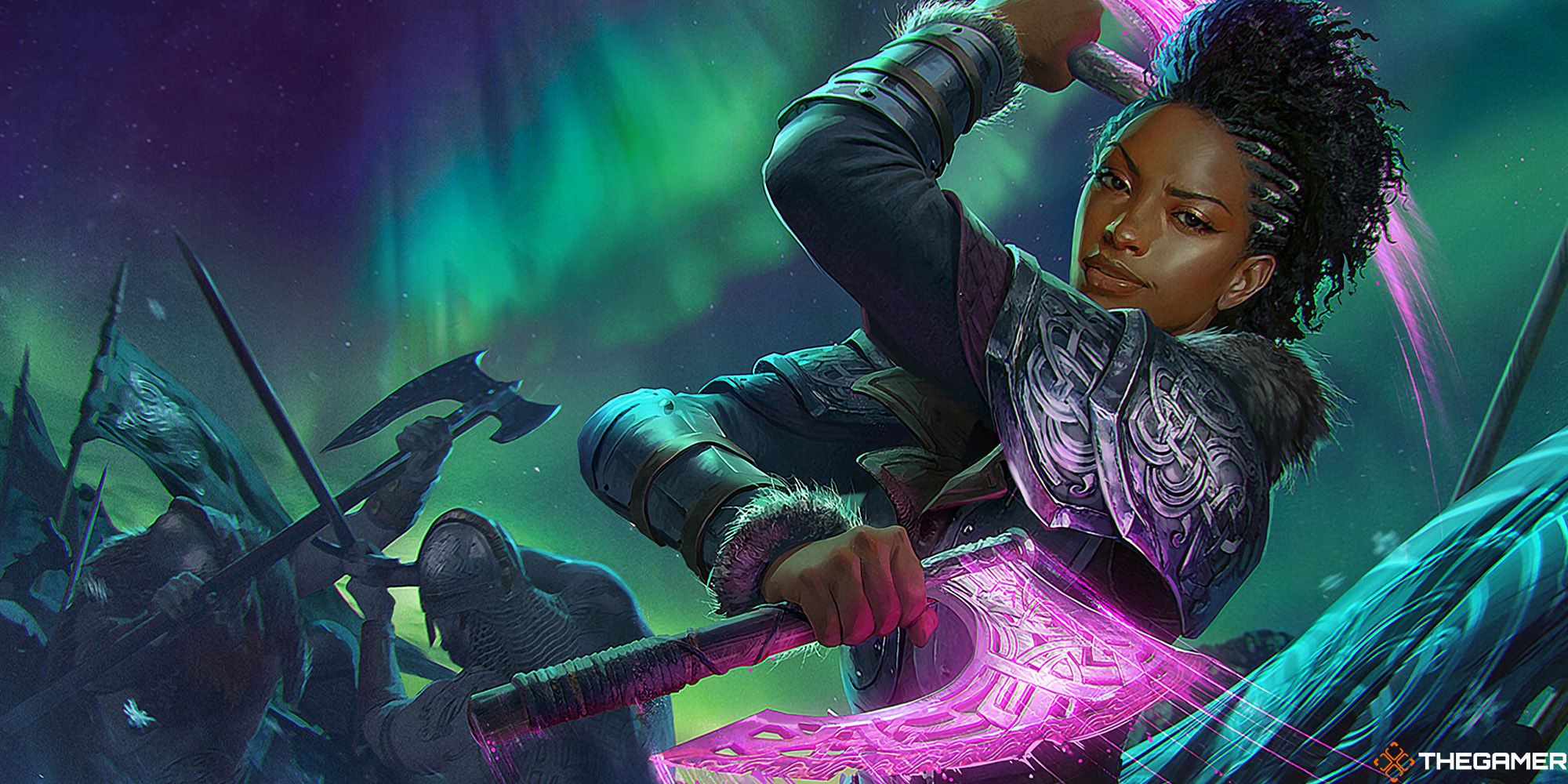 Like Vivien, Kaya came from a world completely destroyed by Nicol Bolas. Unlike Vivien, Kaya’s response was to get to work building as much power as she could, serving on both Ravnica and Fiora as a powerful ‘Ghost-Assassin’. If there was a ghost that needed killing (again), Kaya would do it for the right price.

Like a Capricorn, Kaya is resilient and ambitious. You don’t work your way up the ranks of the Orzhov Syndicate without ruffling a few feathers, but it never dissuaded Kaya. However, deep down, Kaya is more than a money-grubbing capitalist, one of her first acts as guildmaster was to release many people from their debts to the Orzhov and take them on for herself. She is driven by a sense of fairness for all people, even if it means having to take on more work for herself to accommodate it. 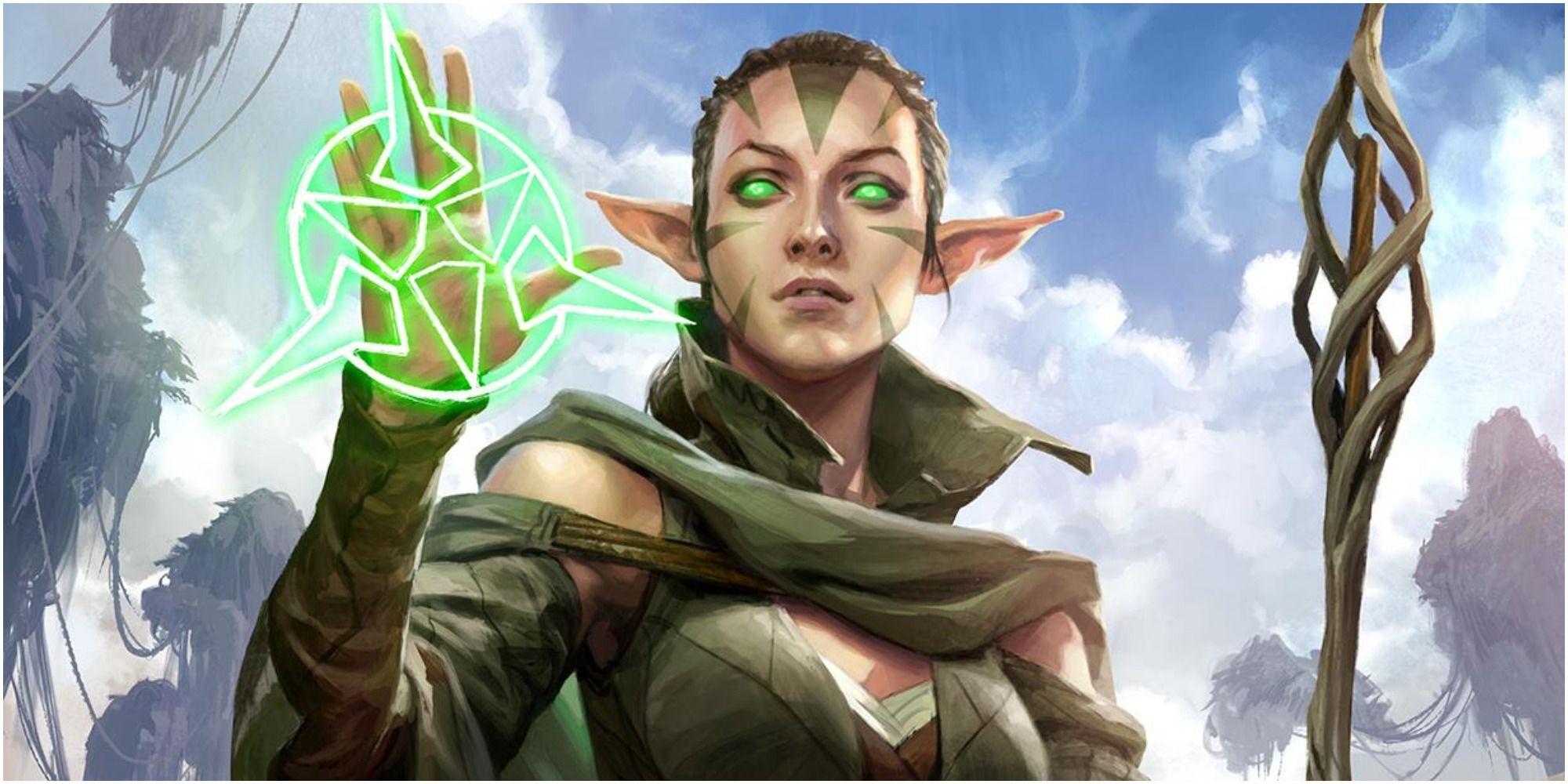 Nissa is an Elvish shaman with a deep, intrinsic connection to the plane of Zendikar. She has an intimate knowledge of the plane, and will do anything to protect it and its people.

Aquarius’ are idealists and want to see their world become a better place. While many in our world would see that as bolstering communities or working for charities, Nissa sees it as helping the land of Zendikar itself thrive. That drive can put Nissa at odds with others, such as when her former ally Nahiri aimed to ‘fix’ Zendikar’s tumultuous environment, prompting war between the two. 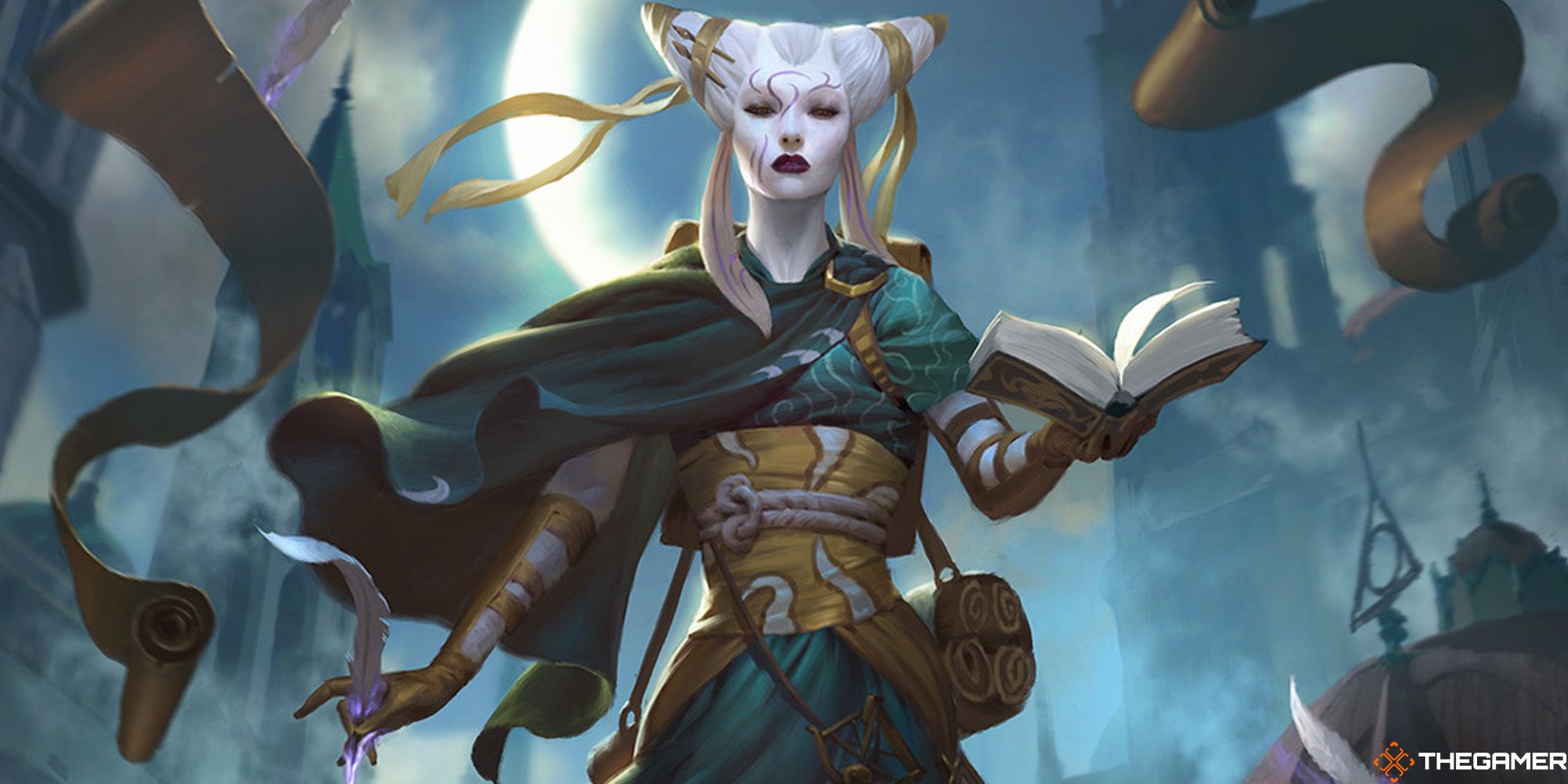 As a Moonfolk from Kamigawa, Tamiyo was fascinated by history and tradition. She wanted to explore every plane, recording their stories and histories to bring back to her own people in Oboro. In true Pisces fashion, she’s endlessly curious, but with a hint of spirituality that other signs like the Geminis lack.

Another key aspect of Pisces is their loving, caring, and loyal nature. Tamiyo wasn’t alone in her work, for back in Oboro she had a full family with a loving husband and numerous children, including the adopted Nashi. While Tamiyo would fight to defend her friends, she was more at home in academics and storytelling than in combat.