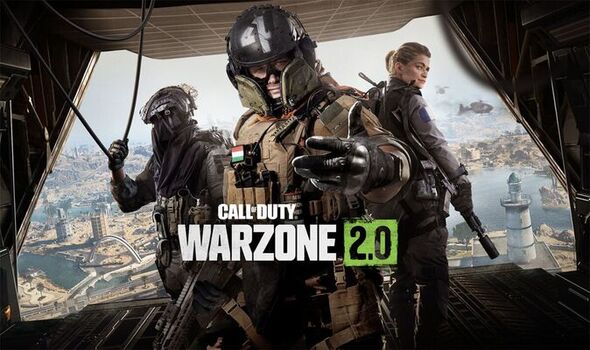 Call of Duty fans are counting down to the release of Warzone 2.0 on PlayStation, Xbox and PC. The brand new Call of Duty Battle Royale mode has a November 16 release date and a 6pm GMT UK launch time. If you want to jump in and experience the action the moment the servers go live, the good news is that you can pre-load Warzone 2.0 on all platforms right now. And you don’t need to pre-order anything, because Warzone 2.0 is completely free to play.

As you can see from the image below, the Al Mazrah map contains nearly 20 significant points of interest, including cities, villages, ports, an airport, cemetery, observatory and caves.

Activision explains more: “No other place in the world has an abundance of natural resources right on a coast that sees an incredible amount of international trade.

“And that is what makes it a battleground for foreign powers at the cost of the local population.”

Joining the Al Mazrah map is a brand new Gulag experience, where fallen players compete for a chance to respawn.

Designed for 2-v-2 combat, it contains a raised courtyard on one wall and an open courtyard on the other. The middle section is completely open, leaving players no place to hide.

At launch, anybody dropped into the Gulag will receive a predefined loadout consisting of either a Pistol or Shotgun, a Lethal Grenade, and a Tactical Grenade. Make it to the centre, however, and you can grab something a bit more powerful.

To make things a little more interesting, a minigun-toting Jailer can be found roaming the Gulag. Eliminating the Jailer sends all four players back to Al Mazrah, although for this to happen you’ll need to put your faith in the other team. It’s also a way of promoting the game’s new proximity chat feature, as you’ll need to communicate with the enemy in order to negotiate a ceasefire.

Speaking of new features, Warzone 2.0 is packed full of them. Players can now battle underwater, visit new Buy Stations for improved gear, play in third-person, and even interrogate enemies.

Finally, players can explore the map using new vehicles such as the Heavy Chopper and Hummer EV. You may need a vehicle to make it to one of three randomised safe zones, which remerge for the final battle.

Outside of Battle Royale and its different variants, Activision has announced plans to introduce a new DMZ game mode to Warzone 2.0.

Arguably the most exciting new addition to the Call of Duty experience since Warzone, DMZ is a sandbox mode that appears to be inspired by games such as Escape from Tarkov.

According to Activision, the ultimate goal is to “loot up and get out alive”, although with countless obstacles to overcome and challenges to complete, this could be easier said than done.

“It’s about exploring an active world of AQ Forces and enemy Operators, completing missions and objectives, and exfiltrating with loot, cash, valuables, and rewards to build out your inventory for the next infiltration,” Activision explains. “Set your own stakes, and ultimately earn some high-tier items for use across the rest of Modern Warfare II and Warzone 2.0.”

It looks like the new DMZ mode will launch in beta form, so expect it to evolve and change at a rapid rate.

Finally, the release of Warzone 2.0 coincides with the launch of a new season, complete with a Battle Pass brimming with rewards.

The Season 1 Battle Pass is a little different to what fans are used to, featuring a new map-based progression system for more freedom.

Activision explains more: “Instead of a linear stream of tiers set out in a scrolling row along the bottom of your screen, your Battle Pass takes the form of a multi-Sector map.

“Players will unlock items using earned Battle Token Tier Skips across this map, which is themed within the current season. Each map has at least 20 Sectors with five items in each Sector — tokens can be used to either unlock adjacent Sectors or earn more items within an unlocked Sector.”

The Battle Pass itself contains four new weapons – two of which are free – as well as a new Operator and lots of customisation items.