Bardin Goreksson is one of five playable characters in Warhammer: Vermintide 2. His default Career is the Ranger Veteran, allowing Bardin to specialize in a long-range sniper or a close-range brawler. The Ranger Veteran Career is versatile, providing numerous solutions to any problem you will encounter.

The Ranger Veteran has access to several melee and ranged weapons, and each of its talents can change how the Career plays. Let's take a look at everything you need to know about playing this Career, and the best talents to use for each of its playstyles. 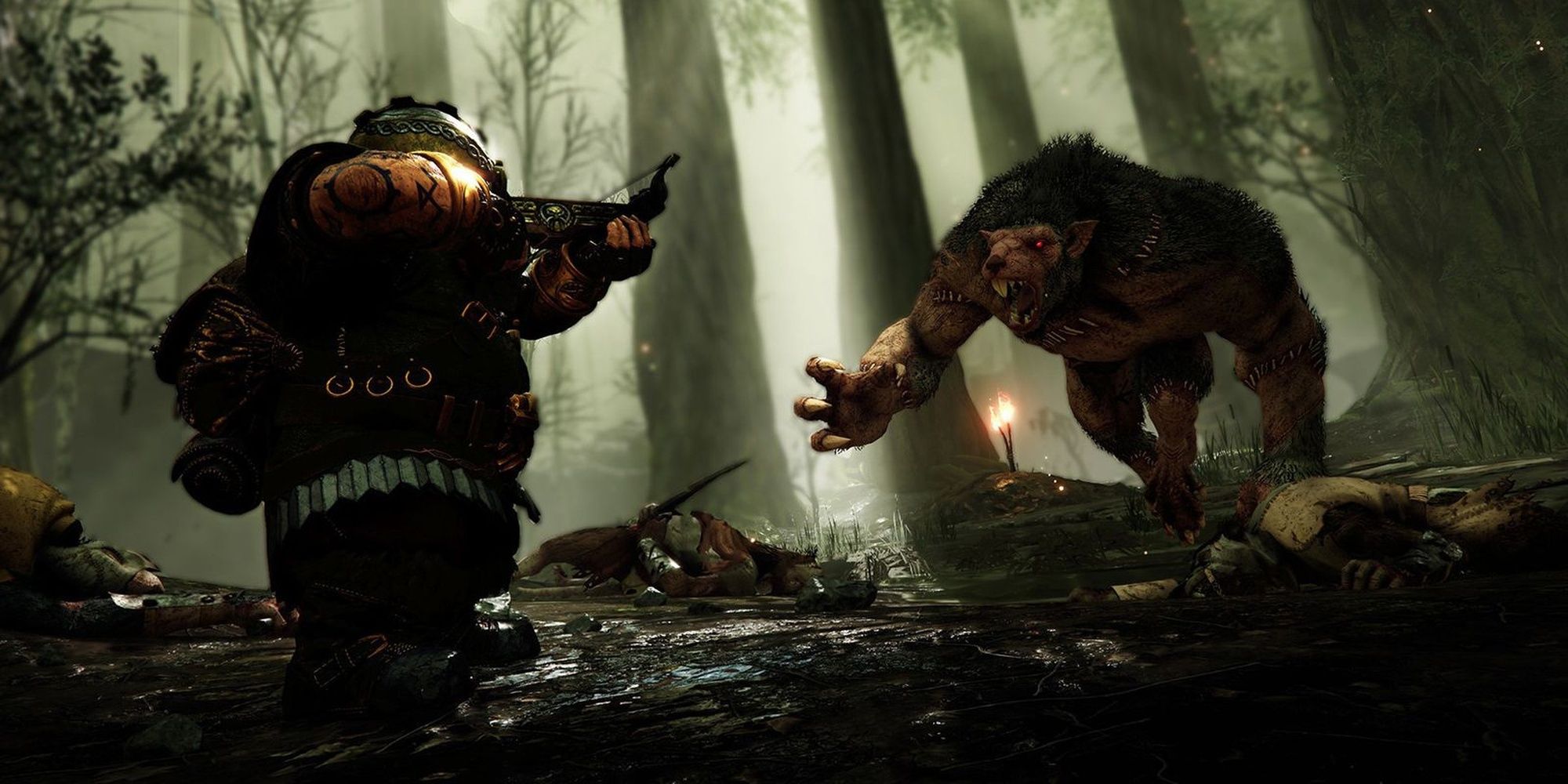 As a Ranger Veteran, you have versatile build options depending on what you want your role in the group to be. You can support your allies by picking off Specials to drop ammo packs and ale or brawl in the front lines with blunt or sharp melee weapons. 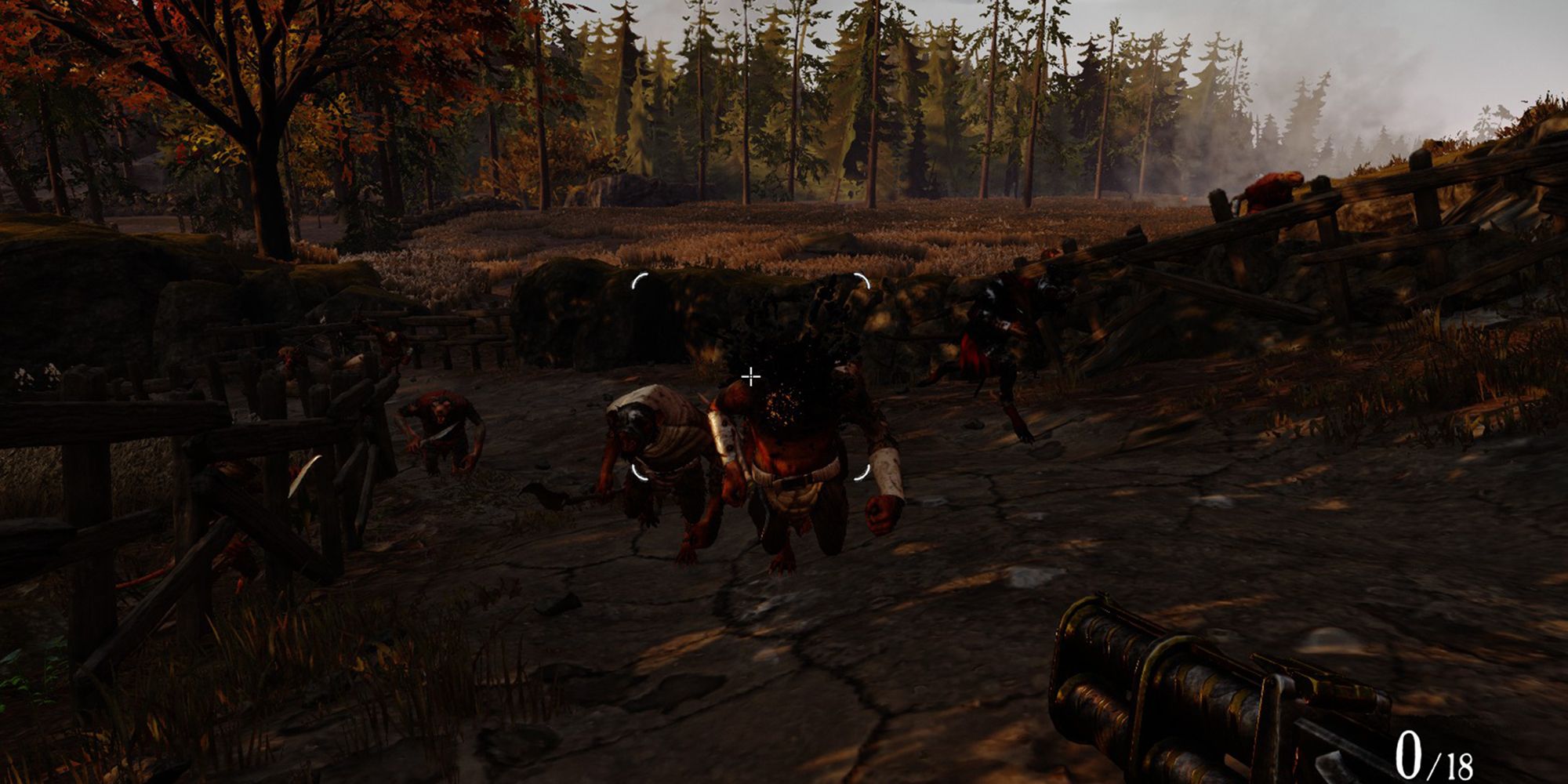 For melee weapons, Bardin has access to the following.

Ultimately, each of these weapons are viable options, except the War Pick, which isn't as good as the others. If you want to use a blunt-type weapon, the Great Hammer or Dual Hammers will do well, and any of the three axes are good for slash-type damage. Take your damage type into consideration when choosing your first Talent ability, as blunt-type weapons stagger enemies more than slash-type weapons, with some exceptions.

The Ranger Veteran Career can use the following ranged weapons.

Overall, the Grudge-Raker is an extremely powerful ranged weapon that can easily deal with most Special enemies at close range, and only takes two shots to kill them at longer ranges. The crossbow is the second-best choice, allowing you to snipe enemies from further distances, but leaving you vulnerable during its longer and more frequent reload duration. 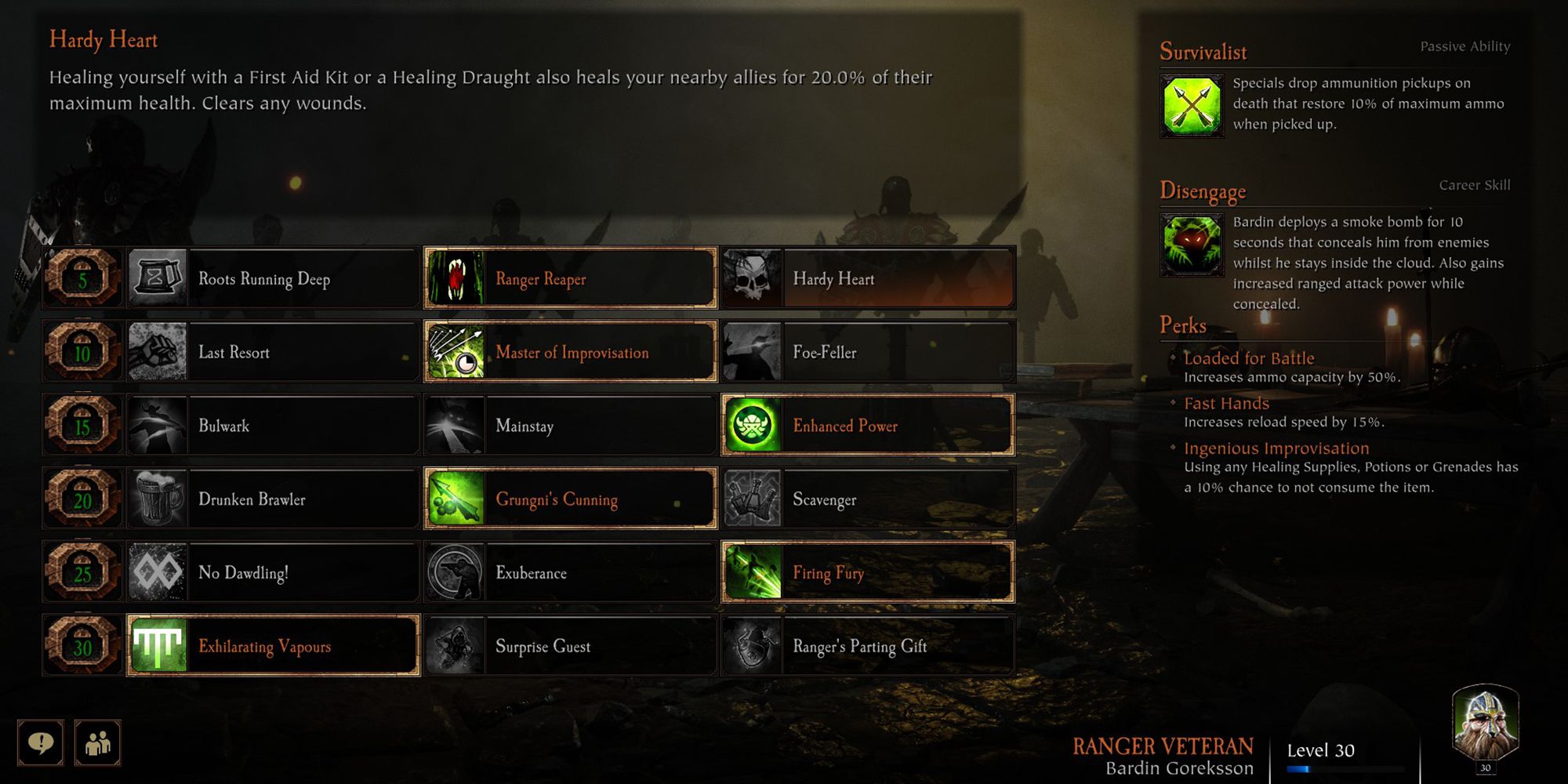 For Bardin's first talent, Roots Running Deep or Ranger Reaper will be your best options. Ultimately, which talent you choose here depends on your weapon of choice. If you are using any of the Hammer weapons, Roots Running Deep will provide more temporary health due to the weapon's high stagger damage but low cleave effect.

Alternatively, if you are using any of the Axe weapons, Ranger Reaper will be better, as this weapon type has low stagger damage but cleaves more enemies with each swing.

Again, your choice of talent here depends on your weapons and playstyle. If you are running a melee-focused build, Last Resort is extremely useful, as it allows you to quickly dump your ammo, then enjoy a 25 percent power increase.

Conversely, Master of Improvisation is great for weapons that have to be reloaded after every shot, like the Crossbow or Handgun. With these weapons, you will be able to maximize the activation of this talent, reducing your Career Ability's cooldown with each shot. This talent is especially good when paired with talents or passives that increase your maximum ammo capacity or the amount of ammo restored through Bardin's Survivalist passive.

Foe-Feller is a good overall talent for builds that don't specialize in melee or ranged, instead playing both styles equally.

As Ranger Veteran, staggering enemies isn't necessarily your first priority. Instead, you should be relying on your ranged weapon to kill Special enemies as they appear, letting your allies focus on fighting hordes. Enhanced Power will help with that, increasing the damage of your ranged shots, making it easier to one-shot Specials on higher difficulties.

In more melee-focused playstyles, Bulwark and Mainstay are best used with weapons with high stagger, like the Hammer and Shield or Axe and Shield. Both of these weapons' charged attack strikes forward with the shield, dealing high Stagger in a short animation. Pushing the enemy after a Shield-charged stagger, you can quickly stagger groups of enemies, triggering Bulwark or Mainstay.

For your level 20 Talent, Grungni's Cunning will give the most value, no matter the playstyle. Because allies can also pick up the Survivalist ammo pack, this talent will increase the amount of ammo your team can scavenge between ammo crates, which is especially useful in ammo-hungry parties. Grungni's Cunning is particularly strong when Bardin is the only ranged specialist, as the amount of ammo restored will keep you from running out of ammo for a long time.

Firing Fury is a great talent for weapons the Grudge-Raker, as you will likely hit two enemies with a single shot without even trying. With other weapons, like the Crossbow, you may have to line up your shot first, but against hordes of enemies, this is easily done.

Exuberance, at first glance, may seem useful, but can be tricky to get value from in practice. Usually, when using a ranged weapon, you don't want to be near enemies at all, meaning you won't be taking damage anyways. To use Exuberance effectively, you need to headshot an enemy while being attacked from the front and back, which is never a position you would want to be in the first place.

No Dawdling! can be good in certain scenarios, especially for melee-focused builds, but doesn't do enough compared to the reload speed granted by Firing Fury.

Exhilarating Vapors is an extremely strong support talent that all of your allies can take advantage of. Disengage lasts for 10 seconds, meaning you will restore a total of 30 temporary health if you remain in the smoke for the duration. The power of this ability is even stronger if your allies stay in the smoke as well, healing them while granting a potent attack speed buff.

Surprise Guest can be useful for escaping a dangerous group of enemies, but good positioning and awareness can solve this problem before it happens.