Warhammer 40,000: Chaos Gate – Daemonhunters has eight classes, with each class having access to a wide selection of abilities, weapons, armors, and wargear. This makes each Knight individually very powerful, but it can also be overwhelming when you come to piece all of it together into a coherent squad.

Just about any combination of Knight will work – yes even four Apothecaries (we tried). But not all compositions are created equal. With a little bit of elbow grease, you can break the game's balance right open and create squads that can wipe out entire formations before they ever get a chance to activate. Here are a few that stand out. 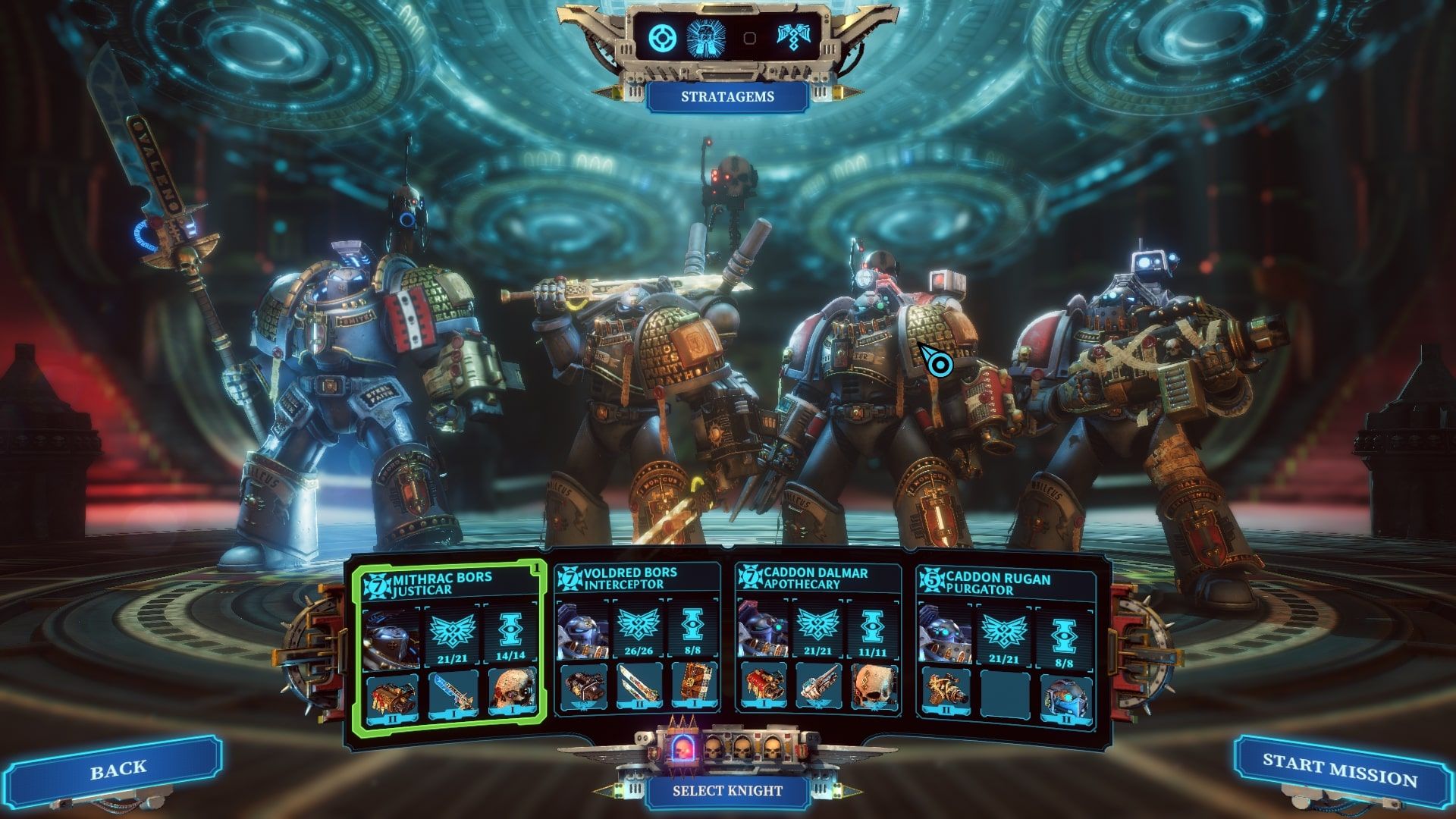 This squad is the default. It uses only basic classes, and it uses one of each. This might seem boring on paper since you can be stuck with this kind of formation for quite some time when playing Chaos Gate, but it can be very nasty once it has all of its abilities set up.

The general playstyle will be to buff up a single character, usually the Interceptor, and then let that character go wild. The remaining Knights can then clean up any enemies that survive.

Firstly, the Justicar. This guy is the glue that holds everything together. His main draw is his Jack-Of-All-Trades nature which allows him to effortlessly fit into any squad. He can wear Terminator Armor, his Aegis Shield is much stronger than his fellow Knights, and he has ways of protecting the squad if that’s what you are looking for.

An easily overlooked ability is Honor The Chapter. This ability costs 1AP and 2WP to cast. Once it is fully upgraded, the Justicar can grant any Knight +3AP and +1WP. For 1 AP, you are functionally doubling another Knight’s AP. The value is unreal.

The Interceptor is your Melee Specialist. He hits hard, he innately ignores Parry, and his skills are focused on teleporting, dealing mass AOE damage, and hitting like a truck. The Interceptor is the perfect candidate for Honor The Chapter and can single-handedly win missions if buffed enough.

The Interceptor comes into his own when you find a decent weapon, such as a weapon that has Armor Pierce. This will skyrocket the Interceptor’s power to a level no other class can hope to reach as no other class moves as fast or has his innate abilities.

The Purgator is an interesting class. His weapons are very damaging, but his range isn’t that great. He relies on sitting in the midfield and raining death from afar. Early game, his ammo reserves are also pretty pitiful, making it difficult to maximize DPS turn on turn.

If you spend some time leveling the Purgator up, however, he becomes a real force of nature. Access to power abilities like Psychic Onslaught and Astral Aim lets the Purgator deal mass damage to hordes and single targets, whilst Sanctified Kill Zone massively increases your squad's damage output. A very useful class that takes a little while to get rolling.

The final piece of the puzzle. The Apothecary is an interesting character because he kind of sucks when you first get access to him. His close combat abilities are limited, his healing is expensive, and he doesn’t have much in the way of damage output. He is a cultist killer, which isn’t required.

Like with the Purgator, however, the Apothecary becomes a monster once you level him up. The Apothecary has access to some truly amazing buffs, such as Iron Arm and Warp Speed that can drastically increase the potency of your Knights. He also gains access to more Servo Skulls, which lets you heal more often, for fewer resources, from a further away. 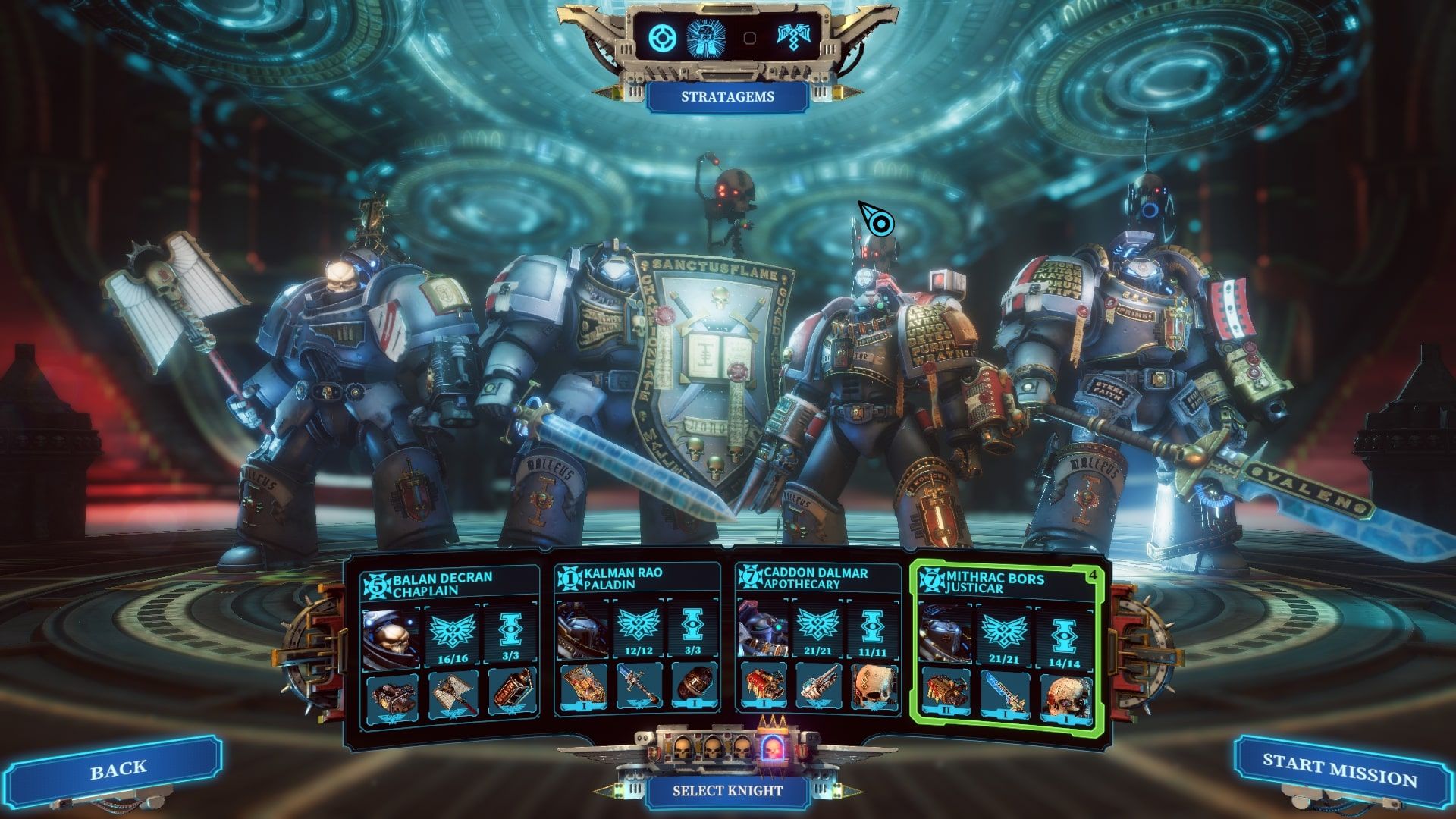 This squad is all about Stunning the enemy and then chaining the Execute Critical Attack to generate an enormous amount of AP per turn. This squad doesn’t want to necessarily kill people – at least, not until you’ve farmed enough AP to instantly win any encounter.

Additionally, this Squad can all take Terminator Armor, making it very hard to shift if your Execution plan doesn’t go to, well, plan. This squad is an instant-killing immovable wall of death.

The Chaplain is the glue that holds this build together. Without the Chaplain, this simply wouldn’t work. His main use is Litany Of Hate. This ability buffs every knight in your squad, and grants +1AP whenever an enemy is Executed. This can be buffed further, allowing the Chaplain to cast it multiple times, further increasing your AP gain per Execution.

This bonus only applies to the knight dishing out the Execution, but considering every Execution is still granting every Squad member +1AP, your AP gains quickly spiral out of control.

The Paladin is the real star of the show. The Paladin has innate access to +1 Stun wherever he uses Force Strike. This allows the Paladin, more than any other class, to Execute enemies faster. He can effortlessly glide through a formation and mince everything in sight.

To make this even more potent, you will have to look for a low damage weapon that applies bonus Stun when using Force Strike, as this will stack. The only downside to the Paladin is his movement speed, which is low because he is forced to wear Terminator Armor. Thankfully, Gate Of Infinity and Quicksilver exist to mitigate this.

The Justicar is the same as he always is – a Jack-Of-All-Trades. In this build (and most builds) you will want to focus on Honor The Chapter. This will be applied to the Paladin to grant a bonus +3AP. This will let the Paladin do his work. Remember, this ability has infinite range.

The Apothecary is that last layer of buffs that elevates this build from good, to ludicrous. The Apothecary has access to Iron Arm, which grants +2 Stun on every hit once upgraded. With the right Servo Skull equipped, this ability has an unlimited range. It is very possible to have your Paladin dealing +4 Stun per hit, which is enough to Execute most enemies in one or two hits.

Not only that, but Warp Speed provides a nice Movement Speed buff that helps mitigate the Paladin's slower movement speed. 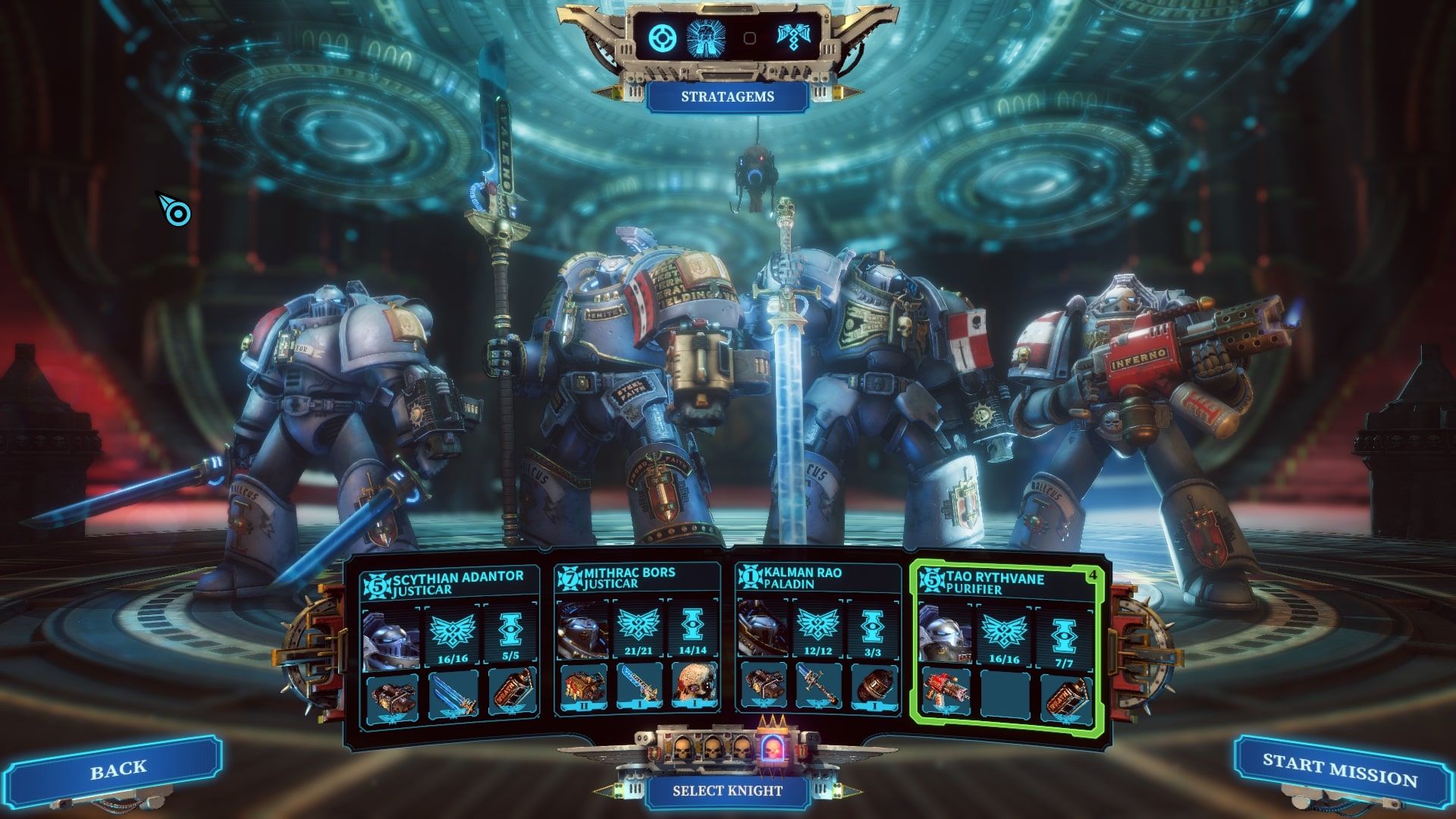 This squad is truly ridiculous and practically unstoppable. Bringing three, maybe four, Justicars and spamming Honor Of The Chapter every turn is what this build does. You buff one of your Knights to a ludicrous degree and watch as they massacre entire hordes single-handedly.

Justicar (all of them)

All you need is Honor The Chapter. Cast it on one guy, and you are done. Remember this ability has infinite range. You could keep all of your Justicars stationary and run through the mission with one Knight and you’d still be able to provide ample support.

This slot can be for literally anything and it will probably work. Maybe avoid the Apothecary and Chaplain, as they are a bit too focused on supporting your allies. The Interceptor and Purifier are excellent choices, with the Interceptor being a whirlwind of death, and the Purifier being able to burn everything in sight.

With this loadout, you’d have 15AP per turn, 17 if you use Quicksilver, and 18+ if you have Auto Abilities that trigger. This is enough AP to kill bosses in a single turn. Heck, it’s enough AP to kill just about any sized encounter you will ever stumble across and still have AP left over.

If you wanted to nerf yourself slightly, you could bring four Justicars and have each Justicar buff a different Justicar. This gives each Justicar 5AP to play with each turn instead of 3, which is almost as silly as giving one Knight 15AP.