You are here:
Home / Victoria 3 Preview – Political And Economic Simulation On An Unprecedented Scale

Victoria 3 Preview – Political And Economic Simulation On An Unprecedented Scale

Like many games from Paradox Interactive, Victoria 3 has you taking control of a single nation and guiding it to success throughout a certain time period. In this case, it’s 100 years exactly – from 1836 to 1936, placing Victoria right between Europa Universalis and Hearts of Iron. Historically, this was a time of great industrialisation and political upheaval, and Victoria 3 aims to replicate this in everything it does.

As a result, one of the most striking differences between Victoria 3 and its compatriots on the grand strategy scene is the back seat taken by militarisation and war. Yes, war and related mechanics are featured, but you won’t be moving units around the map like a game of digital Risk. Instead, you’ll have to deal with slowly moving war fronts. Gone are the days of micromanaging sieges and dealing with enemy armies that make a direct line for your capital. Conflicts feel more realistic as a result, but they aren’t the main draw.

Victoria 3 places far more emphasis on political and economic simulations. It’s possible to go an entire game without fighting a war at all, but it’s almost impossible to manage your country without encountering some form of internal strife. Much of your time will be spent dealing with pops, or populations. These are groups of people stratified by their class, their religion, and their political beliefs, and much of the game revolves around keeping them happy or, at least, happy enough not to revolt. 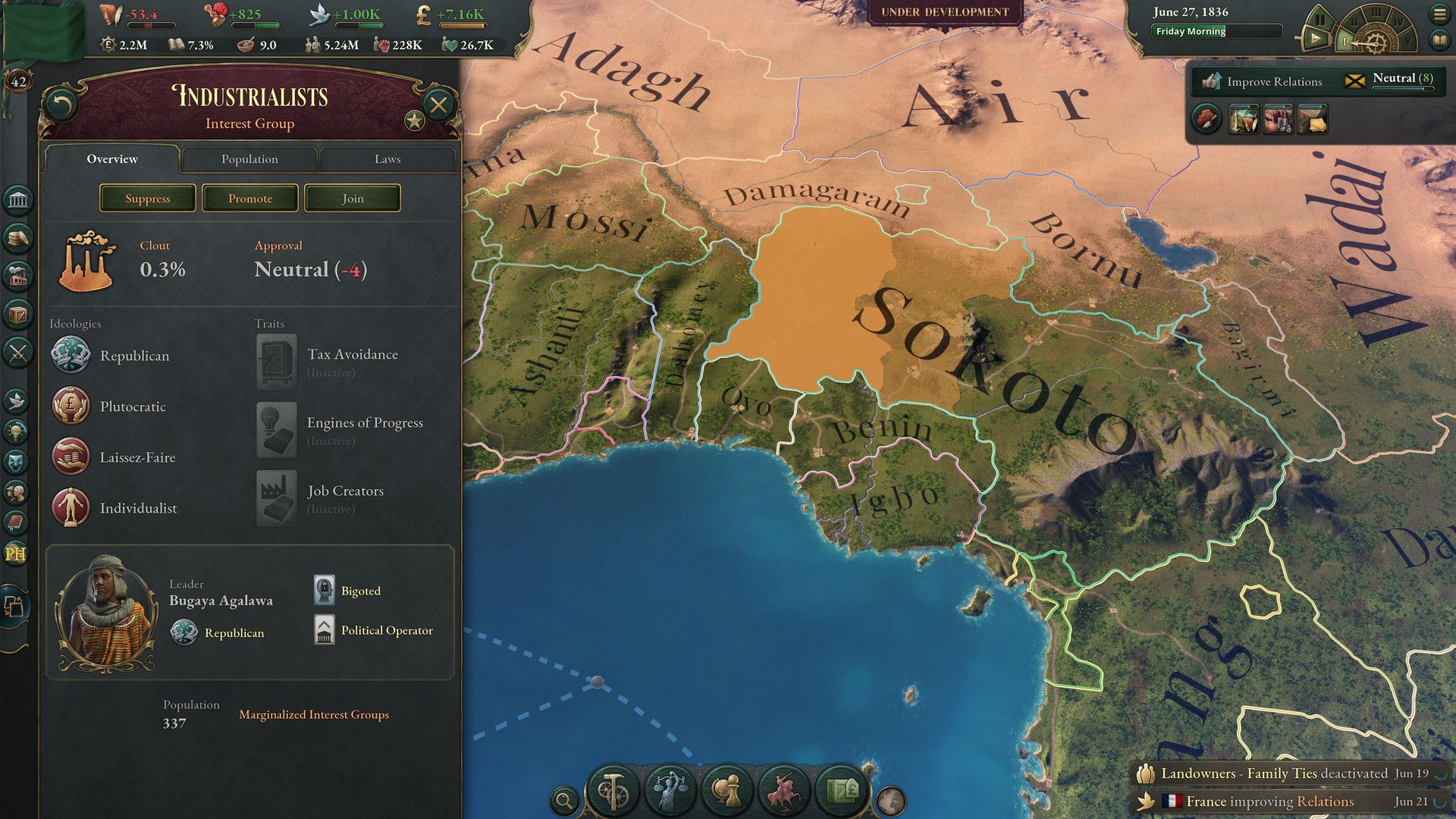 Pops will dictate a lot of what you can do in Victoria 3. They work in your factories, form political parties, and fight in your armies. They expect a certain standard of living, and the bigger pops will demand laws that serve them and their ideals. To put it bluntly, pops are the biggest obstacle you’ll encounter. They are the things stopping you from creating a utopia where healthcare is free and everyone has the right to vote. If the landowners are powerful enough, they’ll throw around their political weight and stop you from passing any laws that they don’t like. Damn landowners. Even in Victorian times they were still making the world a worse place for everyone.

Thankfully, it’s possible to change the makeup of your more powerful pops over time – moving in one direction politically will gradually empower the pops who have similar ideals, giving you more space to create your ideal nation gradually and disenfranchising those whose views oppose yours. Gradual is the operative word here, though – the pops will do all they can to keep their political might, and one of the game’s greatest satisfactions is watching them fade into political obscurity.

The other half of Victoria 3’s main gameplay loop is the economic simulation, and this is a great deal denser than the political half. The simulation runs deep – in addition to your standard treasury, your nation has a GDP to manage and improve, which ties directly to your pops’ standard of living. Improving your financial situation is something that requires a lot of attention – you can micromanage your industry to the extent that you get to dictate how mines should transport raw materials to your factories or instruct farmers on what to grow in their fields. How you expand your industries and buildings will also impact your economy in a big way. If you expand too quickly and end up not being able to employ enough people to run a factory, that’s money down the toilet. 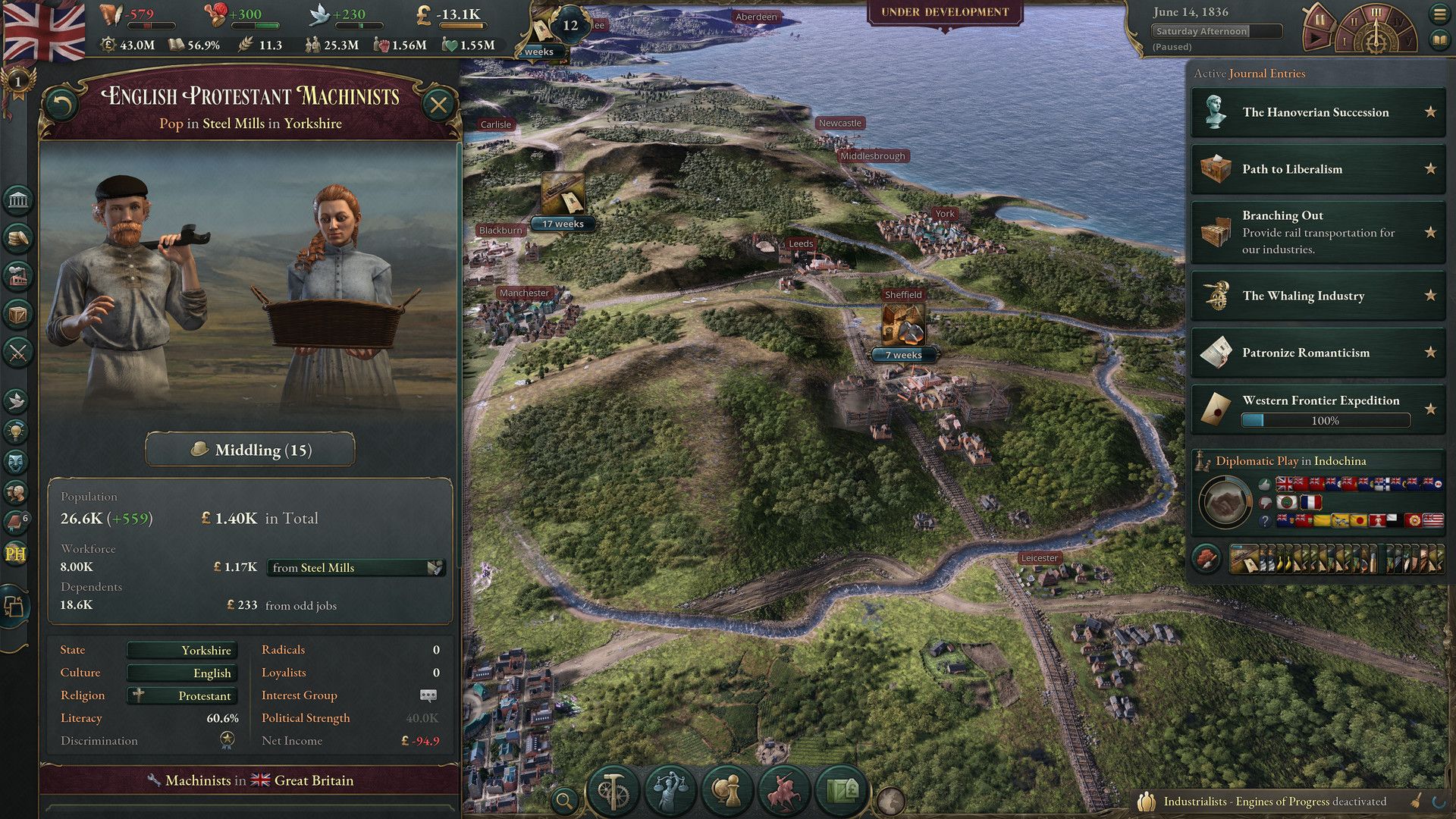 Needless to say, there’s a ton to learn about managing a country. Luckily, Victoria 3 has a pretty in-depth tutorial that guides you through the opening years of any country of your choice – though the game does come with some specific recommendations. Something I really appreciate about the tutorial is that not only will it explain how to do something, but it will also have an explanation of why you’d want to. The game will tell you why using more primitive farming tech might lead to an increase in yield instead of expecting you to work it out yourself, and it highlights how reactive and adaptable you’ll need to be as a player.

Saying that, even with such an in-depth tutorial, the game is one of the most mechanically comprehensive I’ve ever played. After all my time with it, I still feel at a loss with trade mechanics and how to make industries profitable without subsidising them. This level of complexity is going to put some players off, but I’d wager that a greater number will read this and relish the challenge of figuring everything out. With so many different ways to tweak and adjust different facets of a country, Victoria 3 is a min-maxer’s dream.

While it’s fair to place so much emphasis on the deep simulations that Victoria has to offer, I can’t leave out the fact that the game is easily the most stunning that Paradox has created so far. Towns and cities grow dynamically as your country develops, with railways showing up as they become more prevalent, making the game feel more alive than the more static offerings of the past. Seeing more actual buildings added to the regions you focus on gives you a useful visual representation of your impact on a country. Similarly, war fronts stand out very obviously on the map, giving you an easy way to check on the progress of any international conflict. The end result is not simply a game that feels more alive but a game that feels more like a game, not a visual abstraction of the world’s biggest spreadsheet.

Victoria 3 is a game that will command a great deal of time from its players. It takes a long time to learn, and once you master it, you’ll be hooked by the experience. Upon first booting it up, I felt that familiar, overwhelming sensation characteristic of Paradox games, and I am already counting down the days until I get my hands on it again.