Variety is the name of the game when it comes to Vengeful Guardian: Moonrider's Iwondonilo City stage. You start off on your motorbike, tearing down a highway while engaging in Space Harrier-esque gameplay. You will then transition into a platforming-heavy stage, that features a few tough mini-boss type enemies. Finally, you will cross swords with Iwondonilo City's final boss, and he is easily among the hardest-hitting bosses in the game.

Related: Vengeful Guardian: Moonrider – Bioweapon Lab GuideIwondonilo City is one of the more straightforward stages; there are only a few secrets contained within. However, it does have some tough encounters spread throughout. So, this guide will focus a little less on the exploration elements, and a little more on strategies to overcome those tougher encounters. But worry not, we will be covering every secret that is contained within. 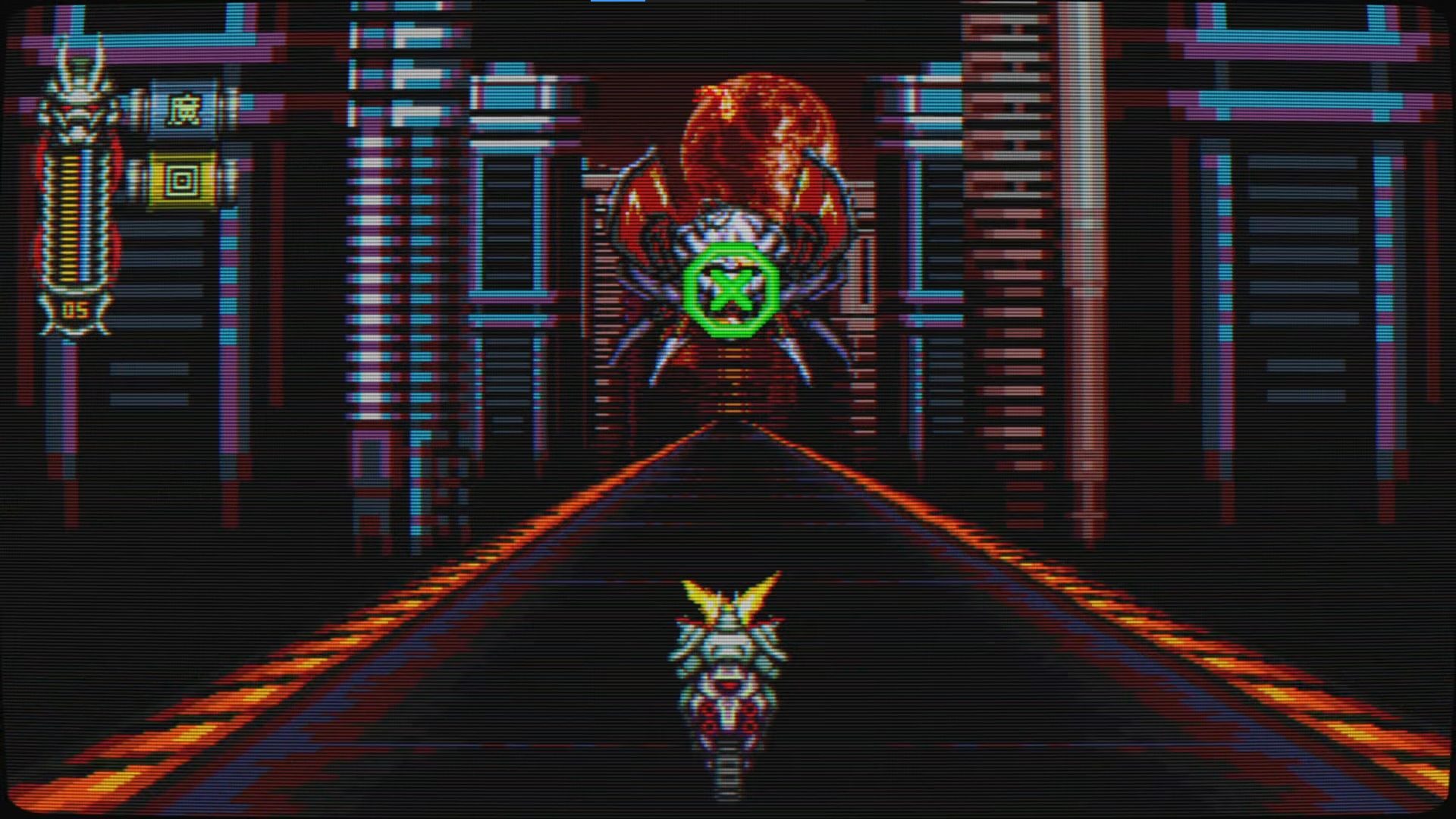 The motorcycle section of Iwondonilo City is very linear, and it doesn't contain any missable unlockables or upgrades. So, we are going to provide a few hints for moving through the stage as smoothly as possible. For starters, you will need to align yourself with the enemy before you will be able to target them. So, whenever an enemy appears on the screen, line yourself up with them. 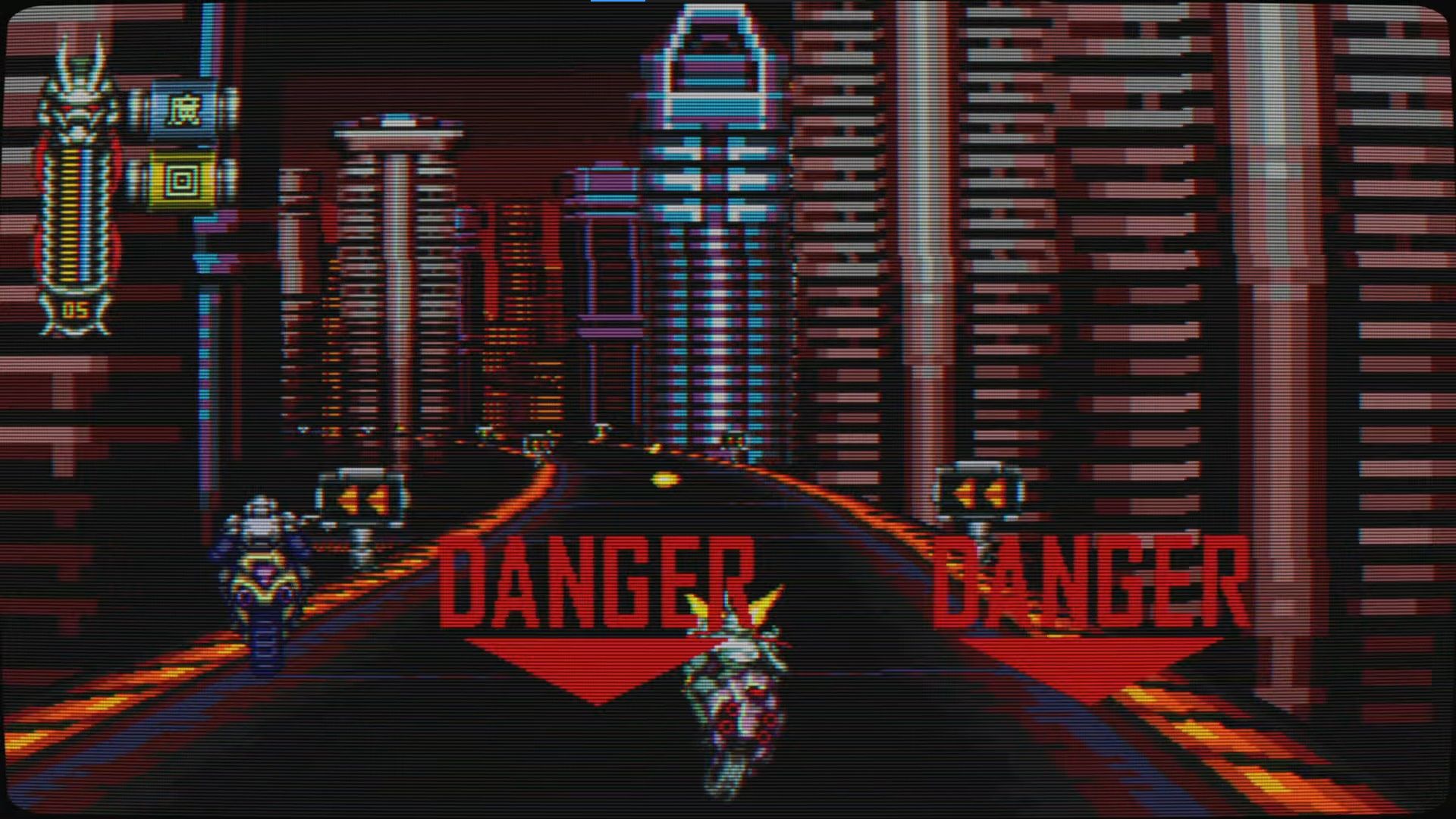 Next, the enemies approaching from behind are always motorcyclists. They always appear in the dead-center of the road, or on the far-left or far-right side. In a pinch, you can wedge yourself in between multiple enemies as they appear. Finally, remember your special weapon! You still have one in the biking sections, and it packs a punch. You will want to save it for the final boss. 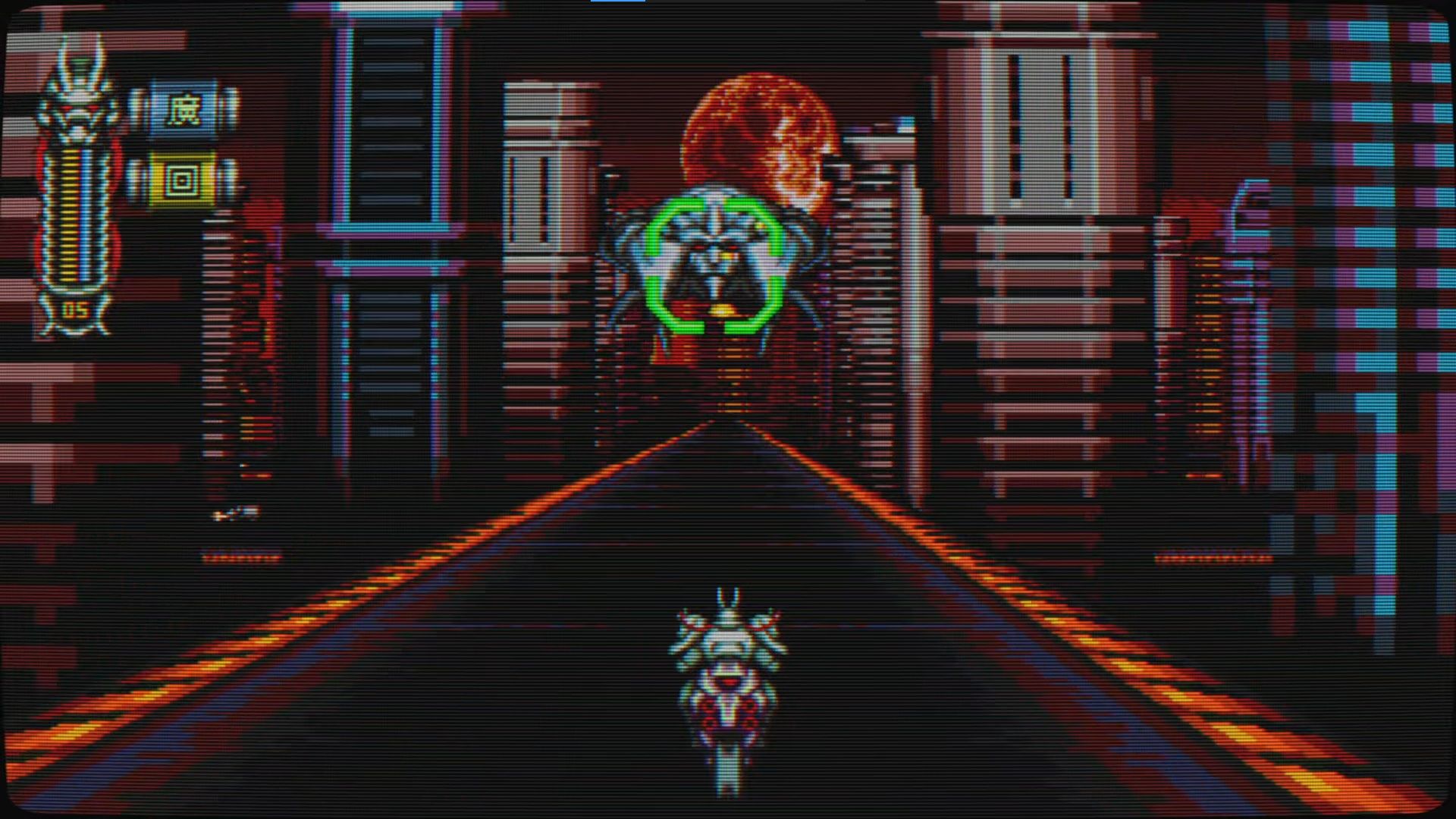 Once you reach the mid-boss of the stage, you will have to contend with a few attack patterns. It starts by shooting a spread of slow-moving bullets. They are all over the place, but they are exceptionally slow. So, just weave between them, while trying to keep your reticle on the boss. 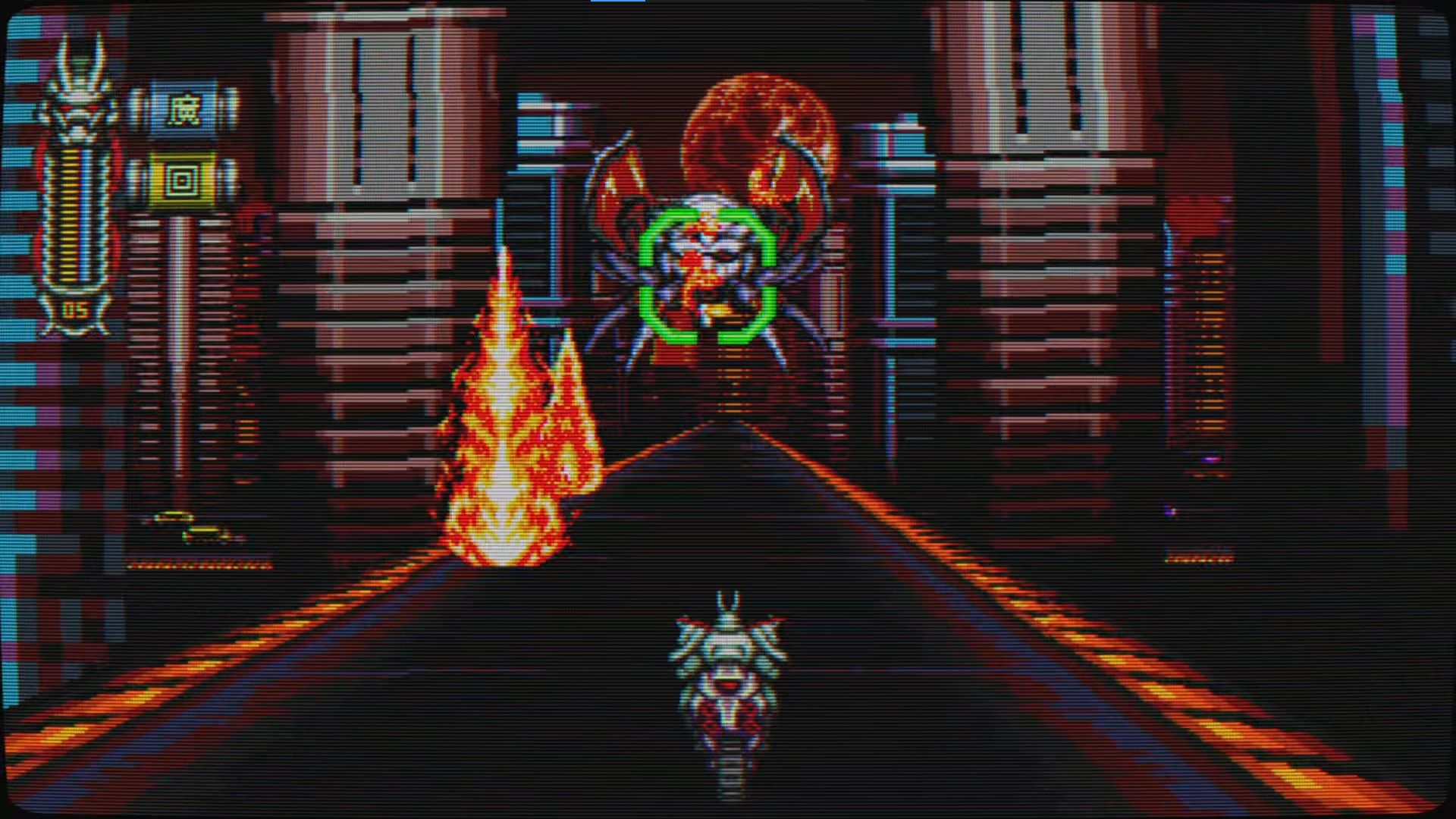 Another attack pattern they will start using sees them throw explosions onto the road. You will have a lot of forewarning with these, so they shouldn't be too hard to swerve around. As long as you keep pelting them while avoiding these projectiles, you should emerge victorious soon enough. 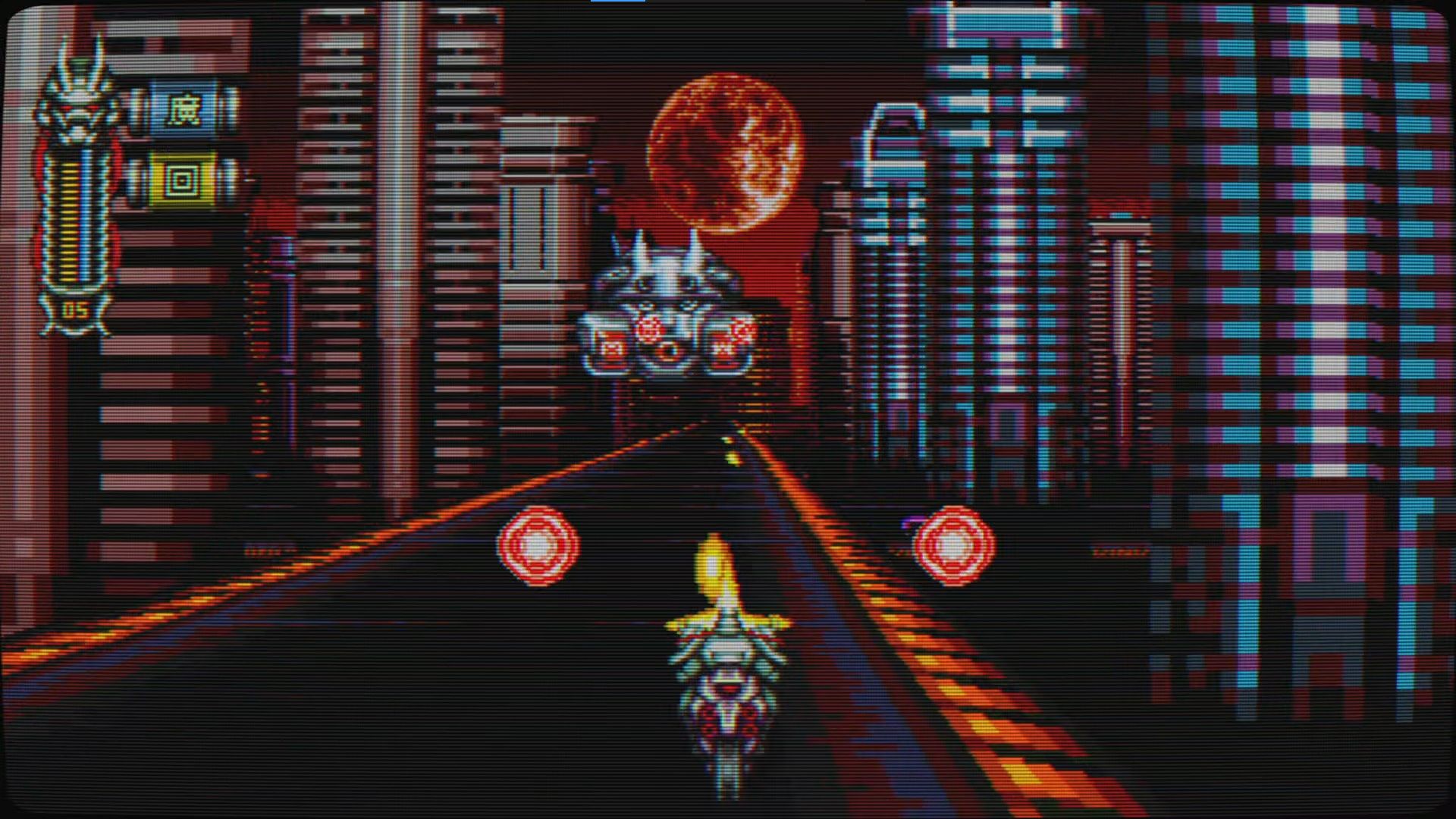 Seconds after you put that bug-like mid-boss down, the real king of the streets will confront you. This boss has two attacks as well. They will fire bullets at you in pairs. There will often be enough space between these projectiles to slip through. They will also fire an explosive at the ground. You will need to hop over this. The timing can be a little tricky at first; resist the temptation to jump prematurely. 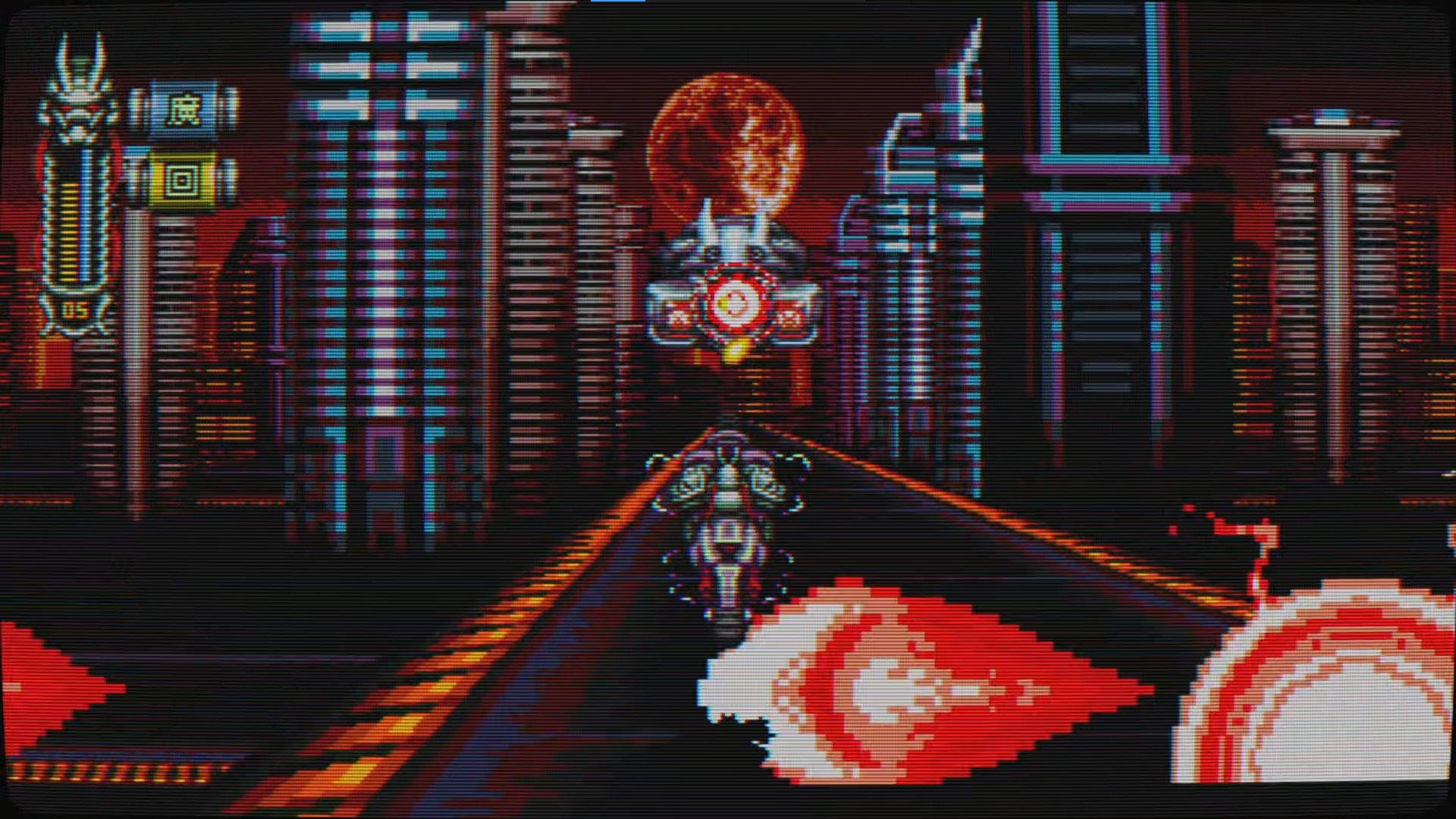 This is the time to start unloading your special attack. If you slip in-between its bullets, you will have a great opportunity to land a steady stream of shots on them. You will have to contend with the odd biker enemies as well. Just take them out the moment they appear. Keep the pressure on them and you will eventually send them crashing to the ground. 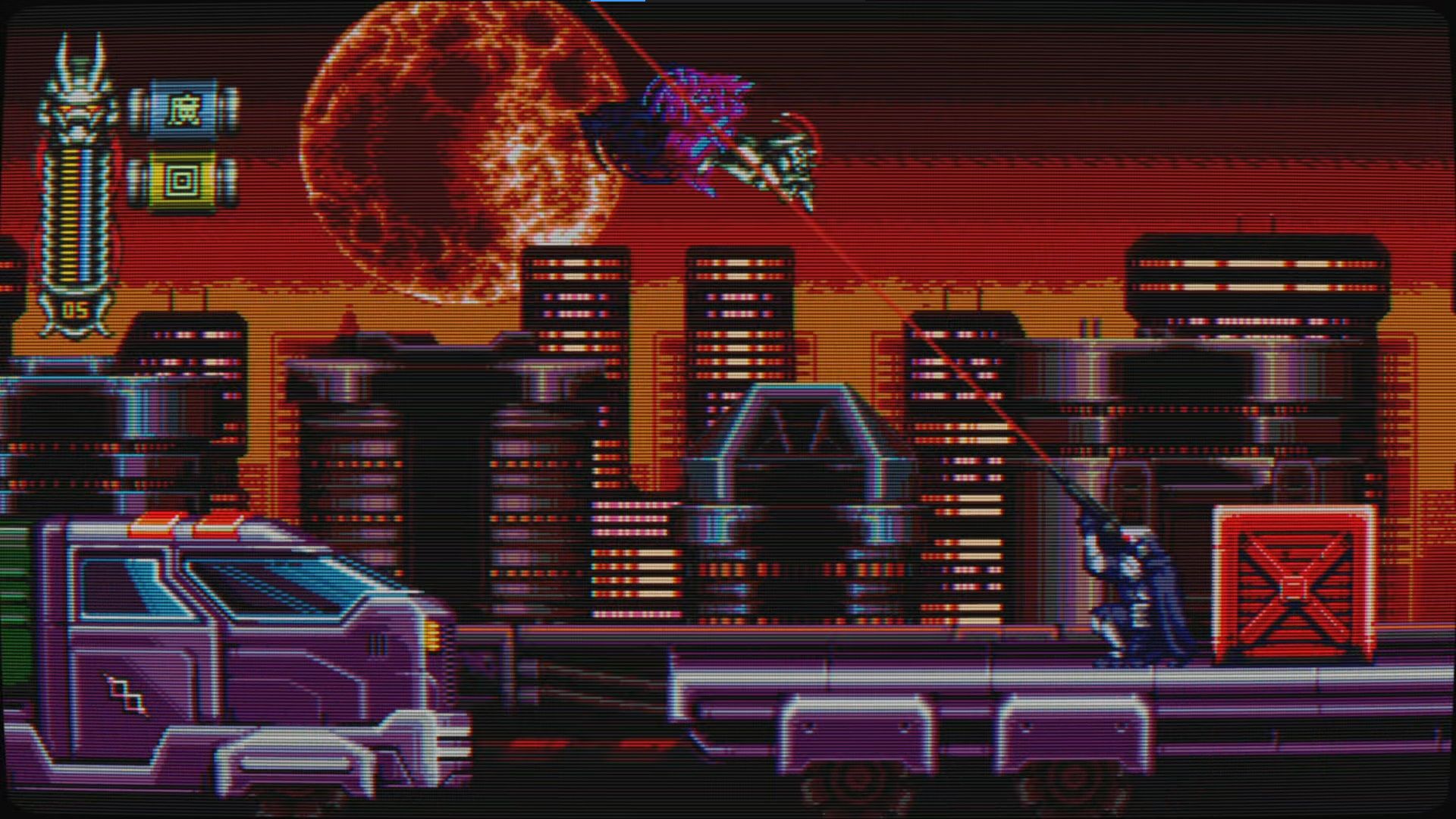 You will ride your bike straight onto a giant truck, and you will begin the side-scrolling part of this level. You will be jumping between vehicles here, but don't stress out about it too much, you only take a small amount of damage if you miss a jump. You will be contending with a bunch of Snipers on this stage. The one thing you need to know about them is that they need to lock into a shot a second before they fire. So, if you are constantly changing levels (i.e. jumping) they will almost always miss. Take them out with your Dashing Attack.

Other enemies this stage features include the familiar Minigun Droid, and the Grenade-Firing Turret. Most of the Minigun Droids will fly in from the left side of the screen. This means that you can typically just ignore them, as you should be sprinting to the right at all times. As for the Turrets, make sure to send their grenades back at them. That is the quickest way to deal with them. 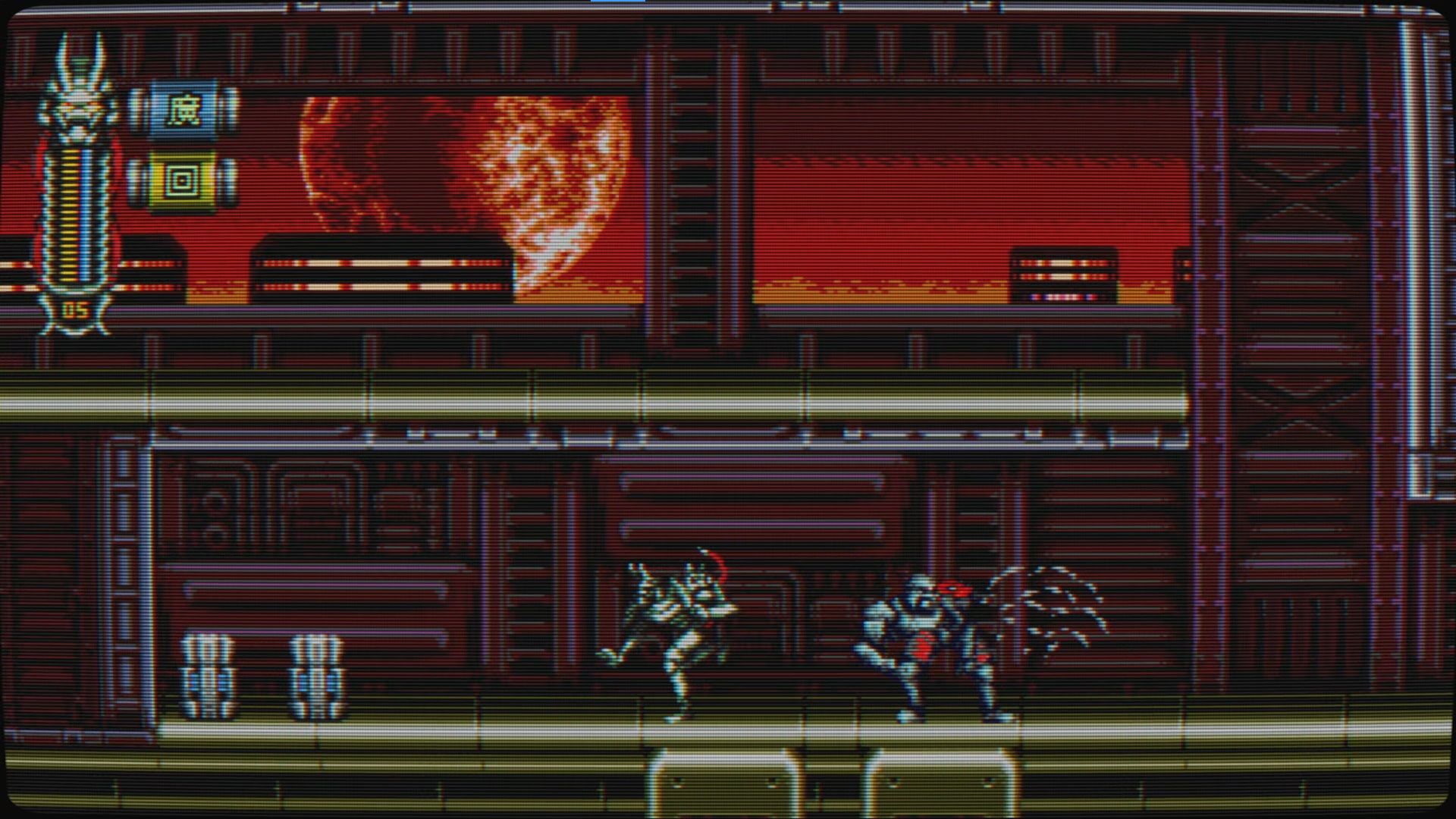 You will also be confronted by a new enemy type. The Staff-Weilding Soldier. These guys have a bunch of pretty annoying moves. They can lunge at you, and they can create an impenetrable shield. Thankfully, they go down with a single Dash Attack. Once you get to the section that consists of narrow hallways, with crates blocking your progress, use your Dash Attack to clear the crates. It will take two. You will have just enough time to do this while also avoiding the prodding attacks of the Staff-Wielding Soldiers above and below you.

The third Staff-Weilding Soldier you encounter is guarding an extra life, it will only take you a second to go get it, so it is worth grabbing. 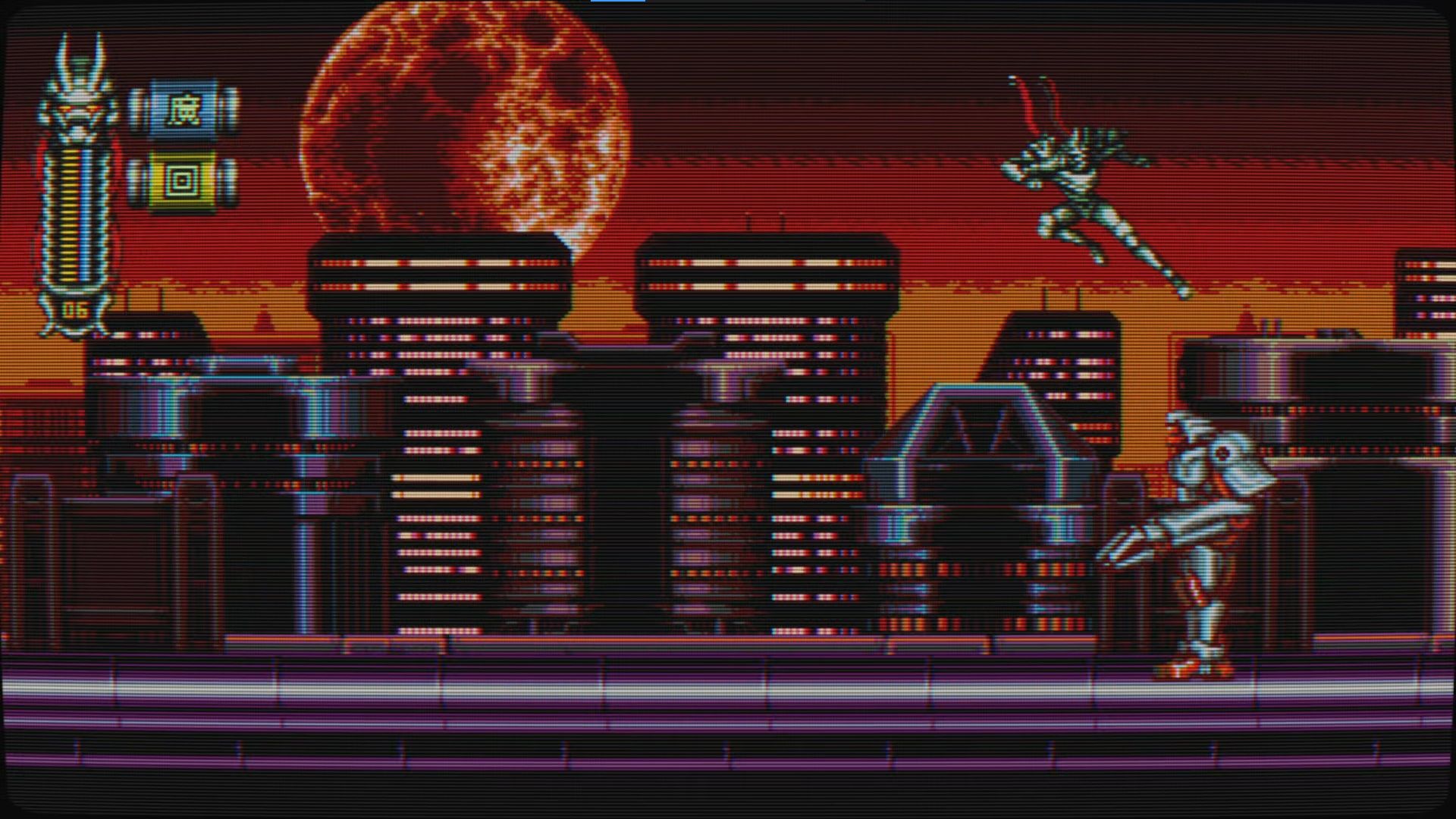 After you clear the section with the Staff-Wielding Soldiers, you will jump onto the back of a flatbed truck, a giant robot will burst out of the crate and attack. This is a mini-boss of sorts. This guy takes a TON of hits, and it has super rangy attacks that can hit high or low. It can also charge across the screen. However, it has absolutely no attacks that will hit you while you are airborne. So, Dive Kick it until it is dead. Part-way through the battle, it will lose its legs and start hopping around more. Stay the course and keep Dive Kicking it! 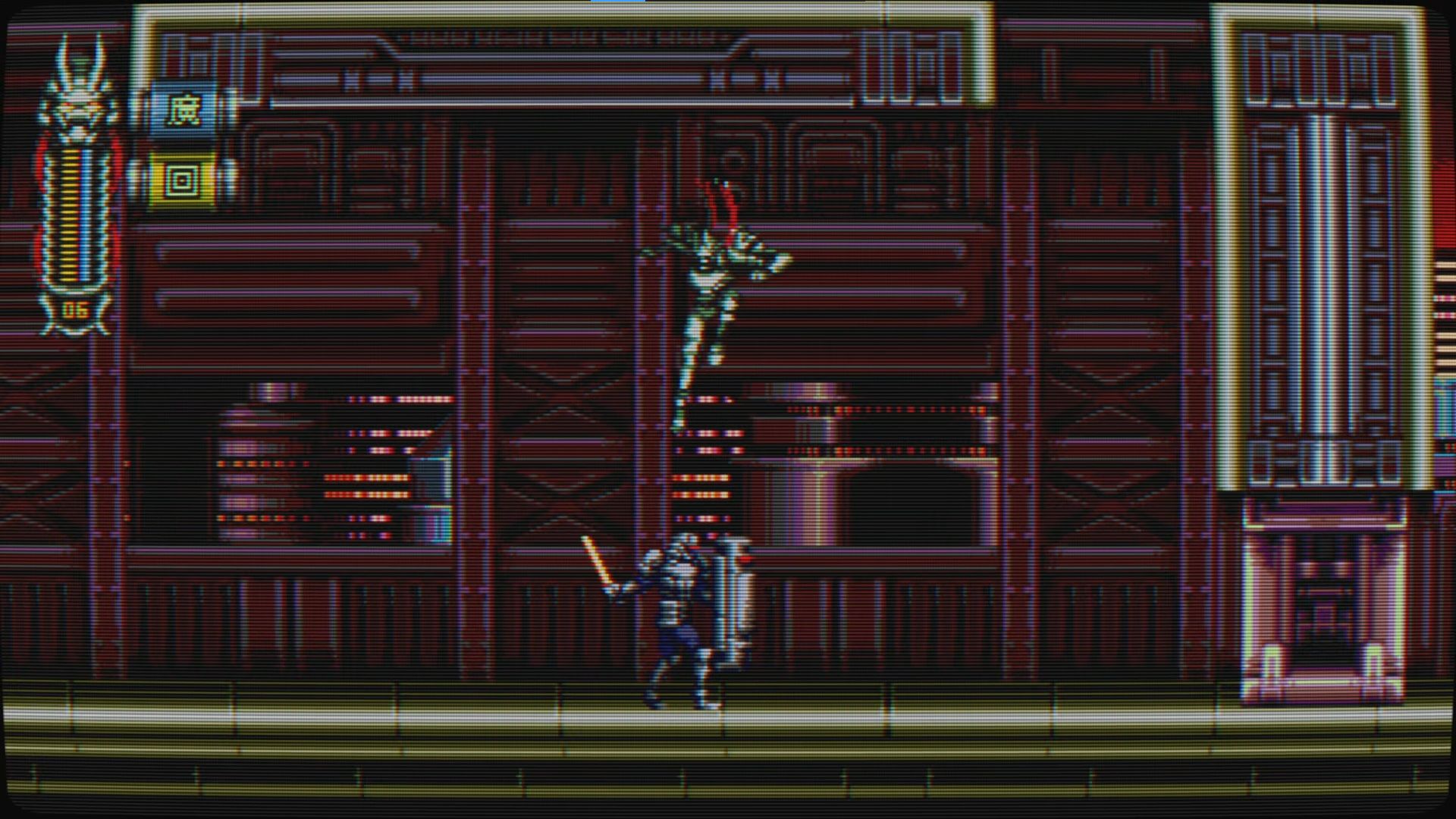 After you beat the Robot, you will platform across a few cars, and then get locked in a room. You will fight four phases of enemies in this room. The first two waves consist of a Shield Soldier and an Assault Rifle Soldier. The third wave is two Assault Rifle Soldiers. And the final wave is a Staff-Wielding Soldier. Kill the Shield Soldiers with a Dive Kick, and take everyone else out with a Dashing Attack. Easy peasy. 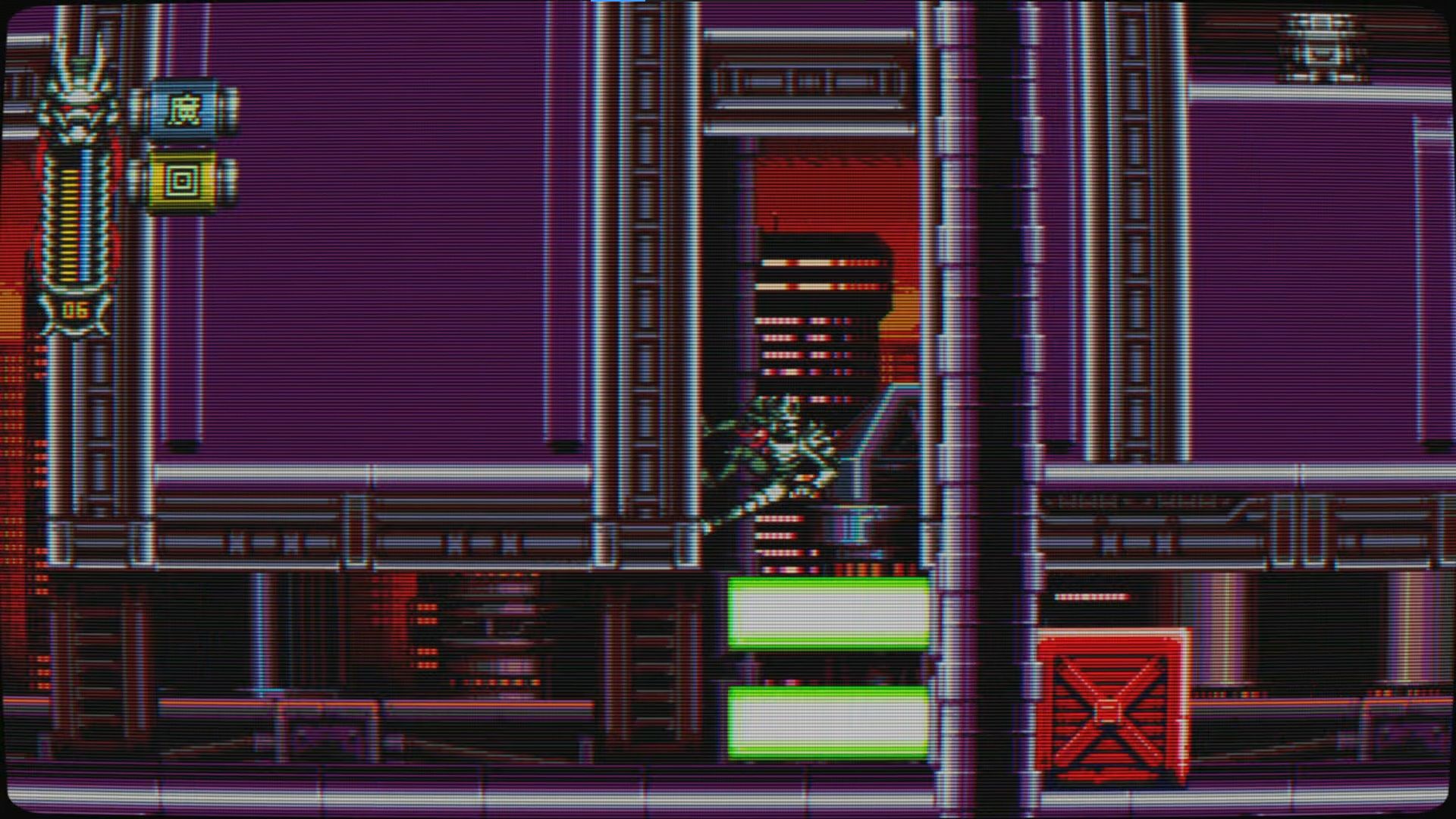 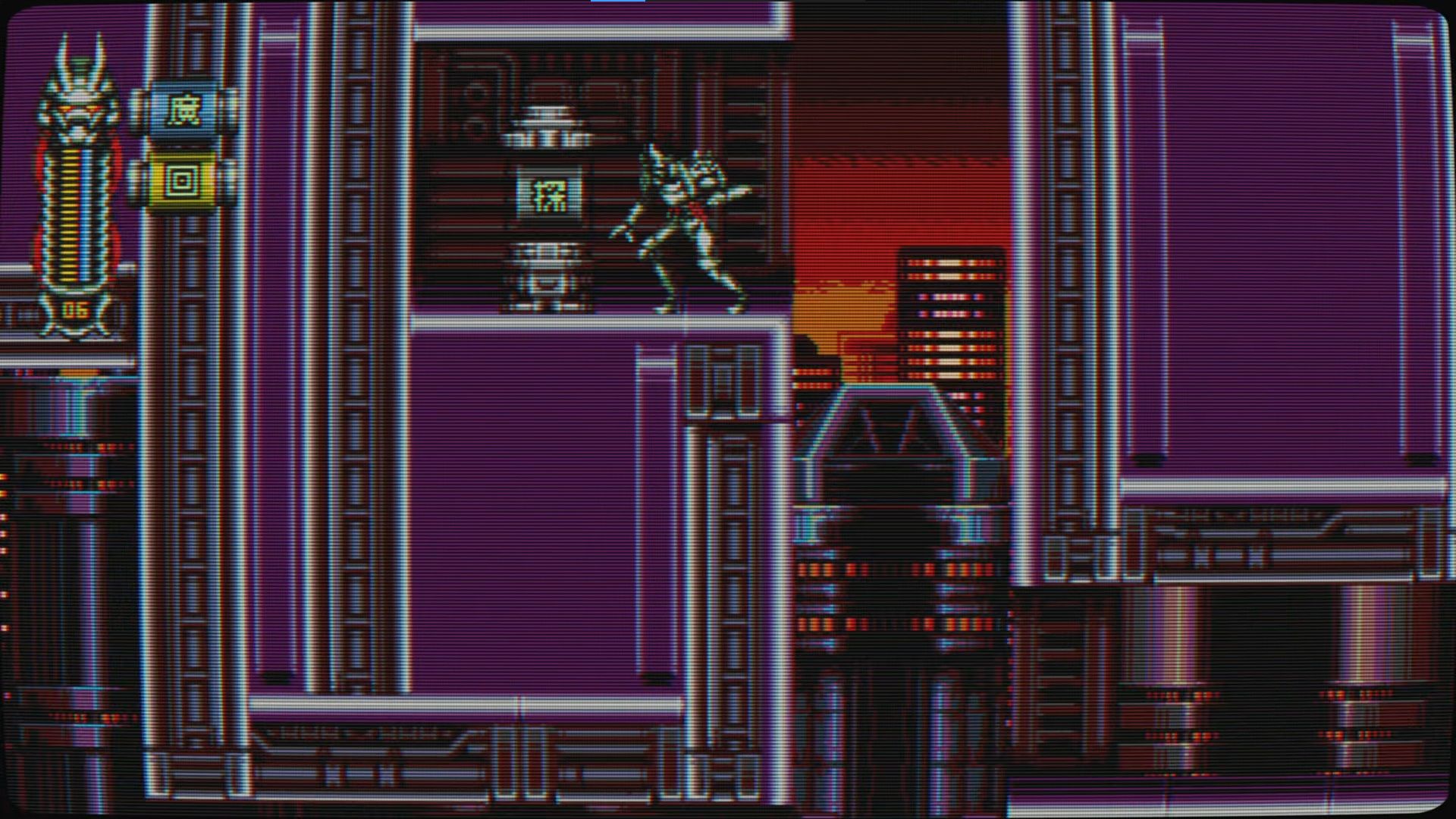 After breaking out of that room, you will fight that Robot mini-boss again. But this time there will be two of them! Just like before, Dive Kick them to death. The last section is a platforming section. You will need to break the crates while avoiding the neon barriers that come whizzing by. After you destroy the second crate, the 'hidden' upgrade chip will be up above. Climb up here and grab the Detective Chip. 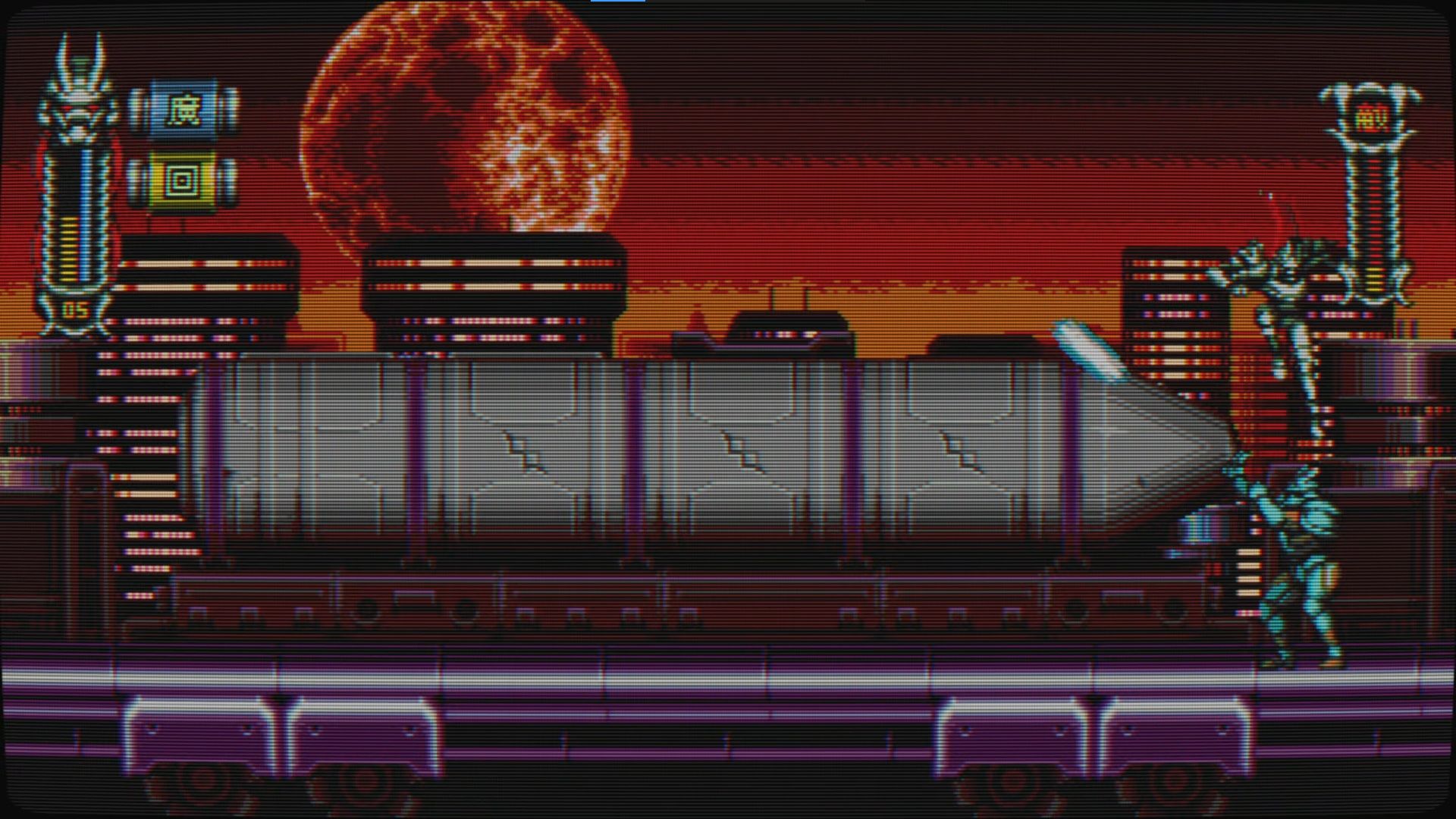 This boss has three primary attacks… They will fire a series of three projectiles at you while they are in the corner, they will jump over you and fire three projectiles down in the classic Spread Shot formation. And they will perform a Dive Kick that generates a projectile once they hit the ground.

At first glance, this boss seems laughably easy. They are extremely vulnerable to your Dive Kick. They like to jump from one side of the screen to the other, and then fire their projectile attacks when they get to the corner. So, when they do that, just jump on their head. When they are jumping at you, their jumps are slow enough that you can dive kick them in the air and hop over them. Using this strategy will easily get you past their first phase. However, once they transition into their second phase, things get rough. 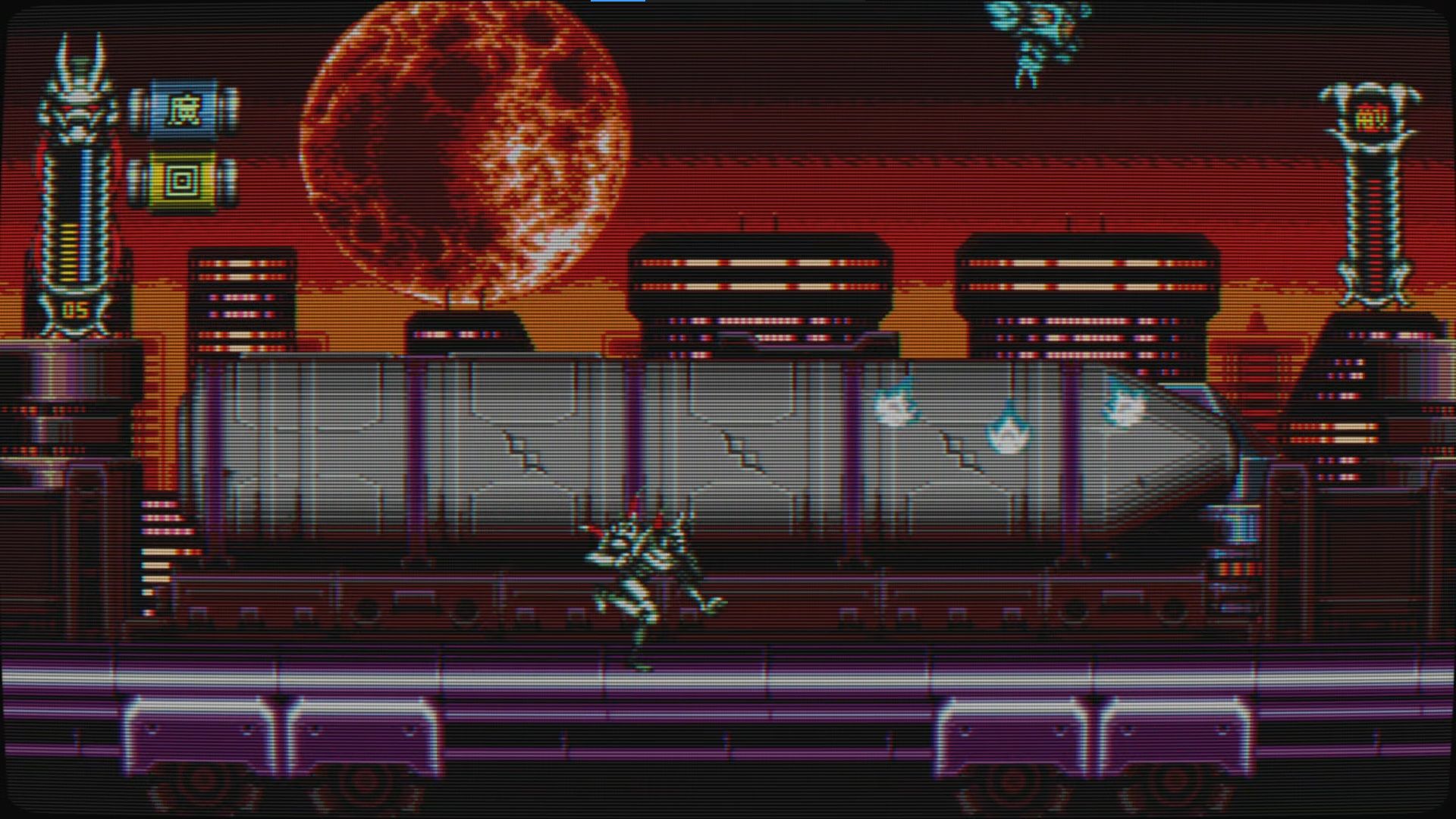 You see, in his second form he is incredibly quick. He has a dive kick move that he will often do when he is above you. In his first phase, this isn't a hard attack to evade, as you can Dive Kick him midair and hop over him, in his second phase it feels almost impossible to escape. His jump is just too quick. Worse yet, he does a ton of damage when he hits you. So, the goal becomes to simply never be under him. Dive Kick him while he is firing his projectiles, and count down the projectiles, as he always shoots three. Once he is about to finish his sequence, run to the other side of the screen. 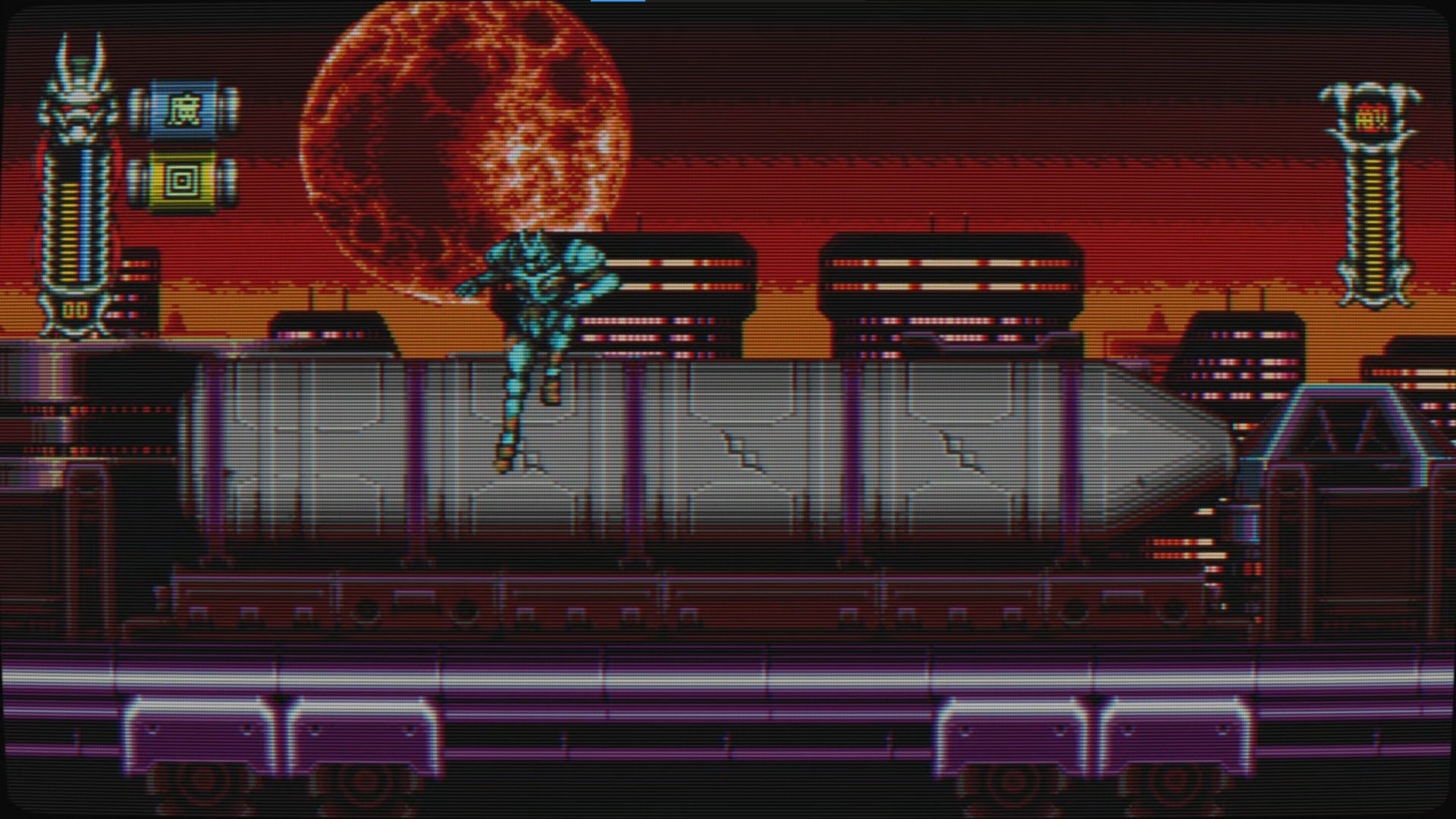 Keep doing this, and you should be able to avoid getting hit too often. Keep in mind that during his second phase he doesn't always shoot his projectiles when he gets to the corner, so you are going to keep running away until he does. Only attack when he is firing projectiles at you! With perseverance, you will be able to put this boss away, but it isn't going to be easy.