You are here:
Home / Vampire Survivors: Every New Character From Legacy Of The Moonspell, Ranked

Vampire Survivors: Every New Character From Legacy Of The Moonspell, Ranked

With the Legacy of the Moonspell DLC, Vampire Survivors introduces nine new characters with which to face the unending hordes. Tying in with the Japanese mythology theme of the DLC overall, these newcomers are a diverse bunch, in terms of both design and mechanics.

From a tanuki with area-based effects to a monk that can enter a state of temporary invincibility, these new characters shake things up, creating new strategies and builds that you can use during your runs. But which of these new characters are the most effective? We’ve analysed each of their strengths and weaknesses, breaking them down to figure out which will give you the best chance against the legions of the night. 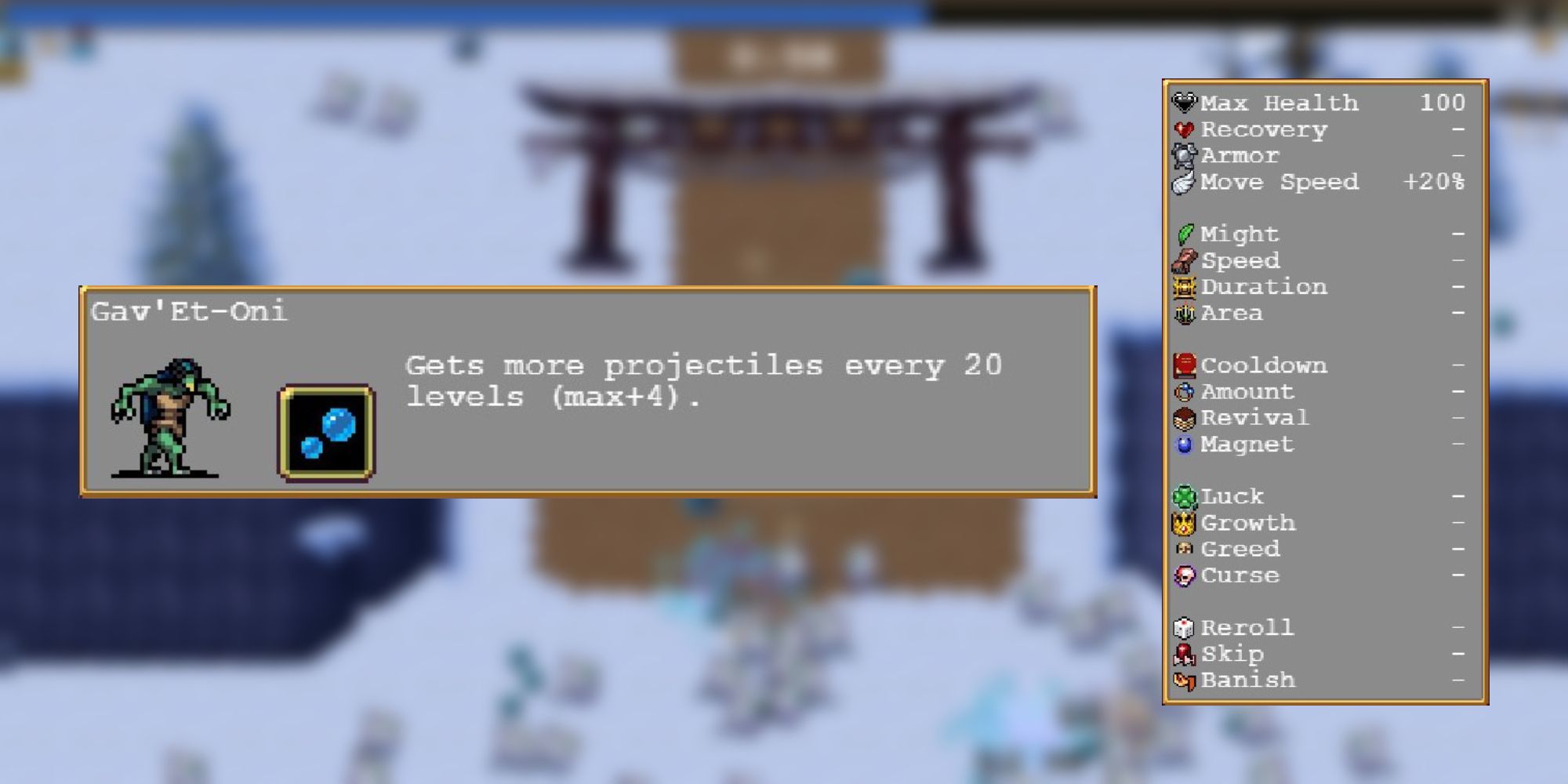 This curious creature is the latest in the ‘playable enemies’ school of characters in Vampire Survivors, unlocked by killing 6,000 Kappas on the new Mt. Moonspell map. Like its peers, Gav’Et-Oni has basic starting stats and gains additional projectiles for its weapons as it levels up, to a maximum of +4.

While this is a reasonably powerful ability, Gav’Et-Oni’s starting weapon, the bubble-blasting Mille Bolle Blu, is underwhelming even when evolved, and his effect isn’t as game-changing as some of the other characters introduced in Legacy of the Moonspell. 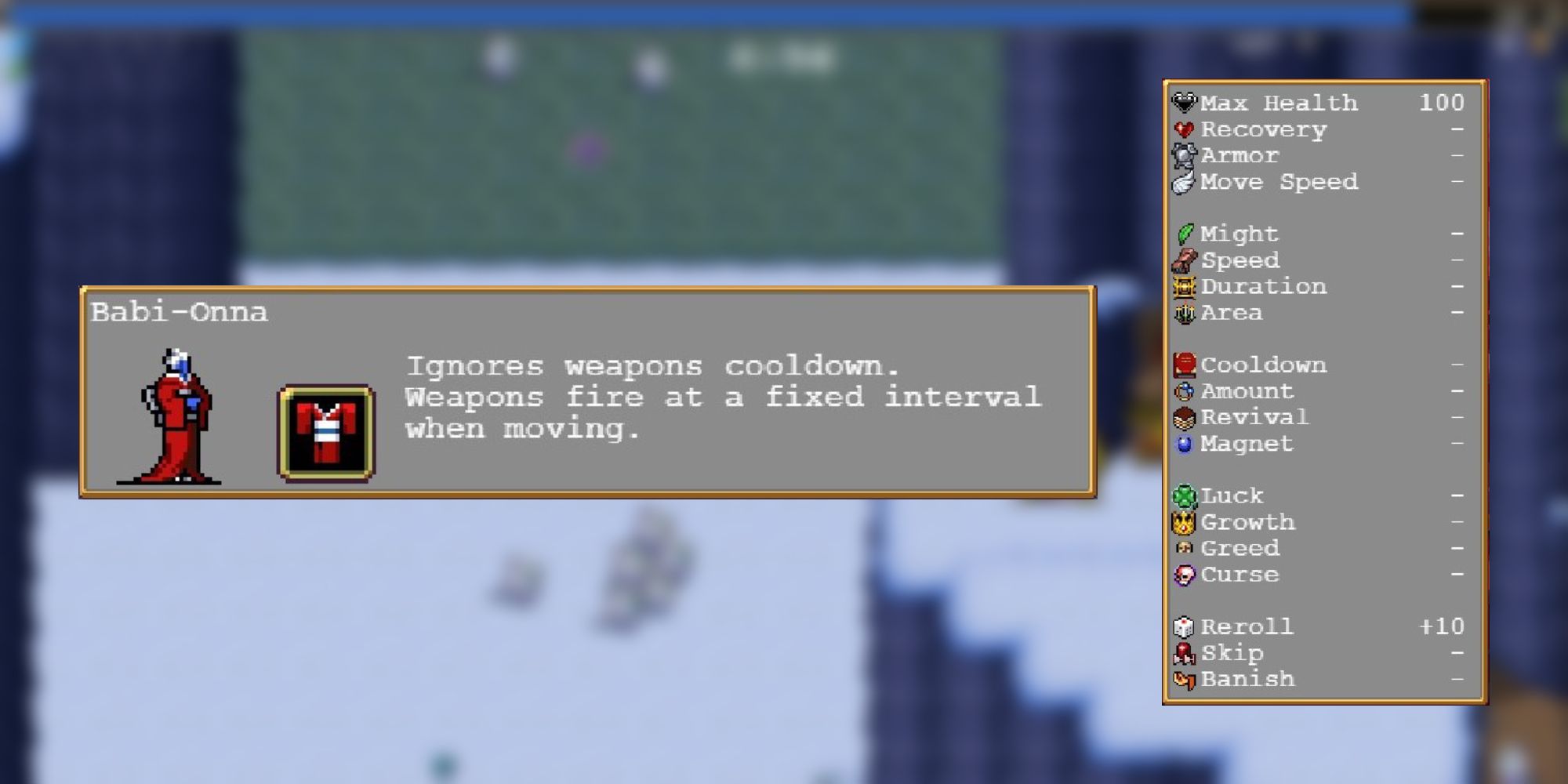 One of the most unique characters in Vampire Survivors overall, Babi-Onna completely ignores the cooldown stat, instead firing her weapons after moving a set distance. This changes the way you build your character, making slower weapons like the Pentagram much more viable, especially when paired with the Wings passive item to raise Babi-Onna’s movement speed, and therefore her fire rate.

There’s likely a powerful combination waiting to be discovered with Babi-Onna, but her odd starting weapon, the Mirage Robe, along with the requirement that she move constantly often putting you in danger, means she’s not the most effective option. 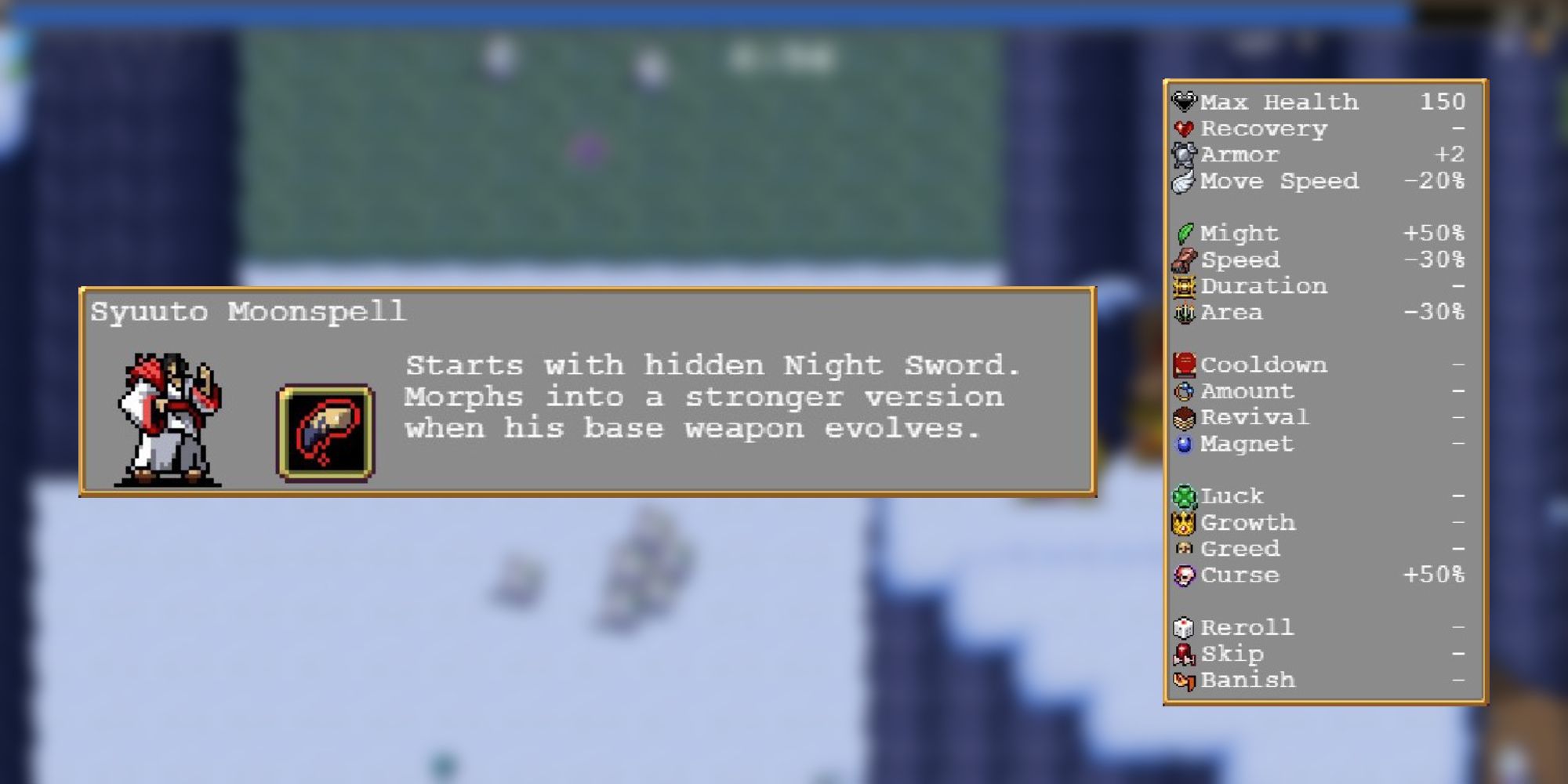 With tanky stats and increased Might, Syuuto seems like an ideal survivor at first glance. He also comes equipped with a hidden Night Sword, a new weapon that he can use without it taking up an inventory slot. These great aspects are balanced out by his slow Movement Speed, which makes it hard to avoid damage early on.

Once you evolve his starting weapon, the Summon Night, Syuuto himself evolves too, gaining a big boost in speed and strength, as well as an evolved Night Sword. This makes him a much more viable character, once you get over the rough early game. 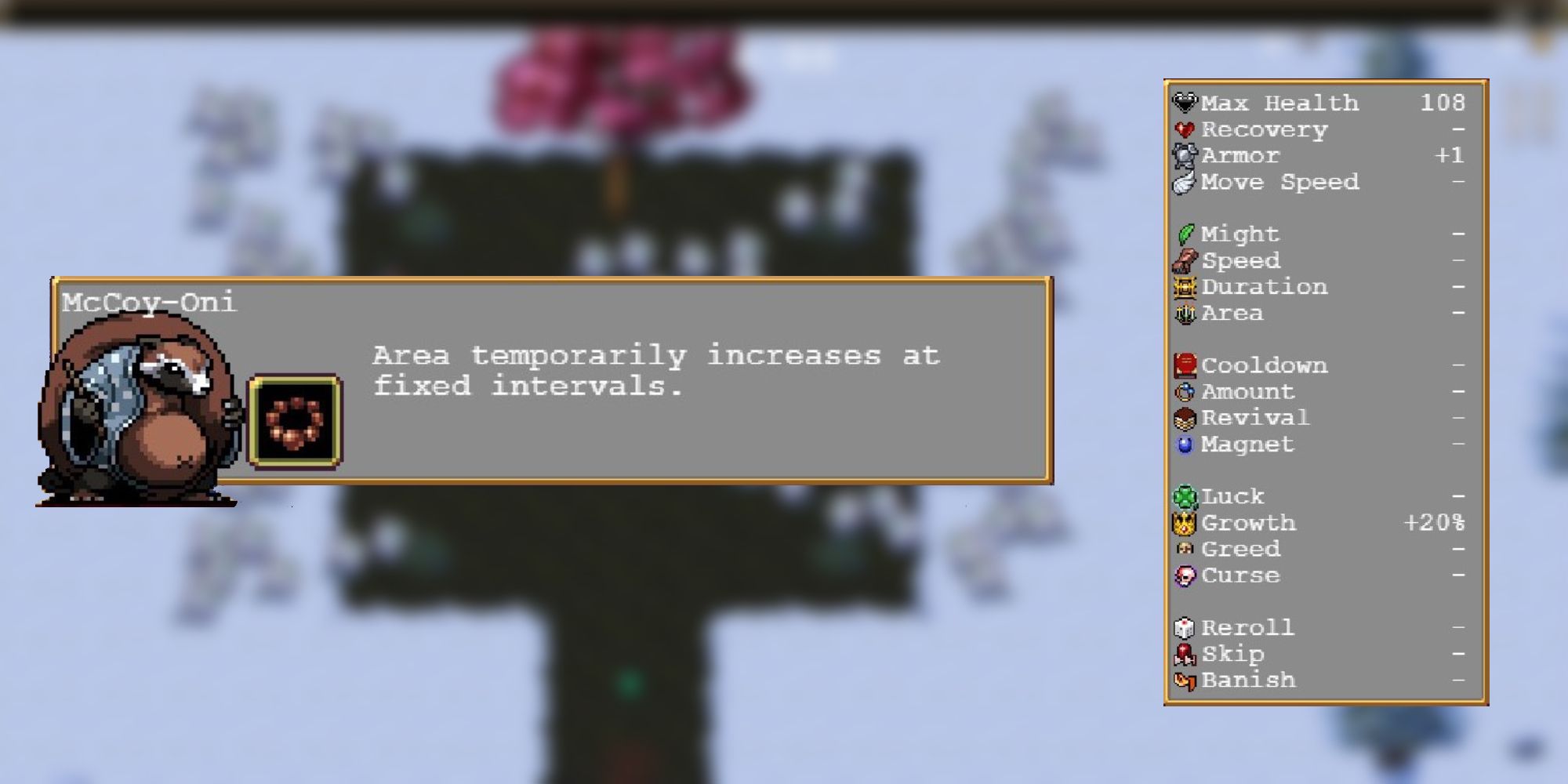 McCoy-Oni’s huge size is a double-edged sword, making it much harder to avoid damage while also making him one of the most visually appealing survivors to date. His passive ability causes the Area of his weapons to fluctuate every few seconds, helping to circumvent his size by extending his reach.

His starting weapon, the 108 Bocce, showcases this ability perfectly, with a set of orbiting orbs that protect McCoy-Oni from harm. This, alongside his base 20 percent boost to Growth, make him a flexible survivor with a lot of power in the late game, particularly when paired with other Area boosters like the Boogaloo of Illusions Arcana. 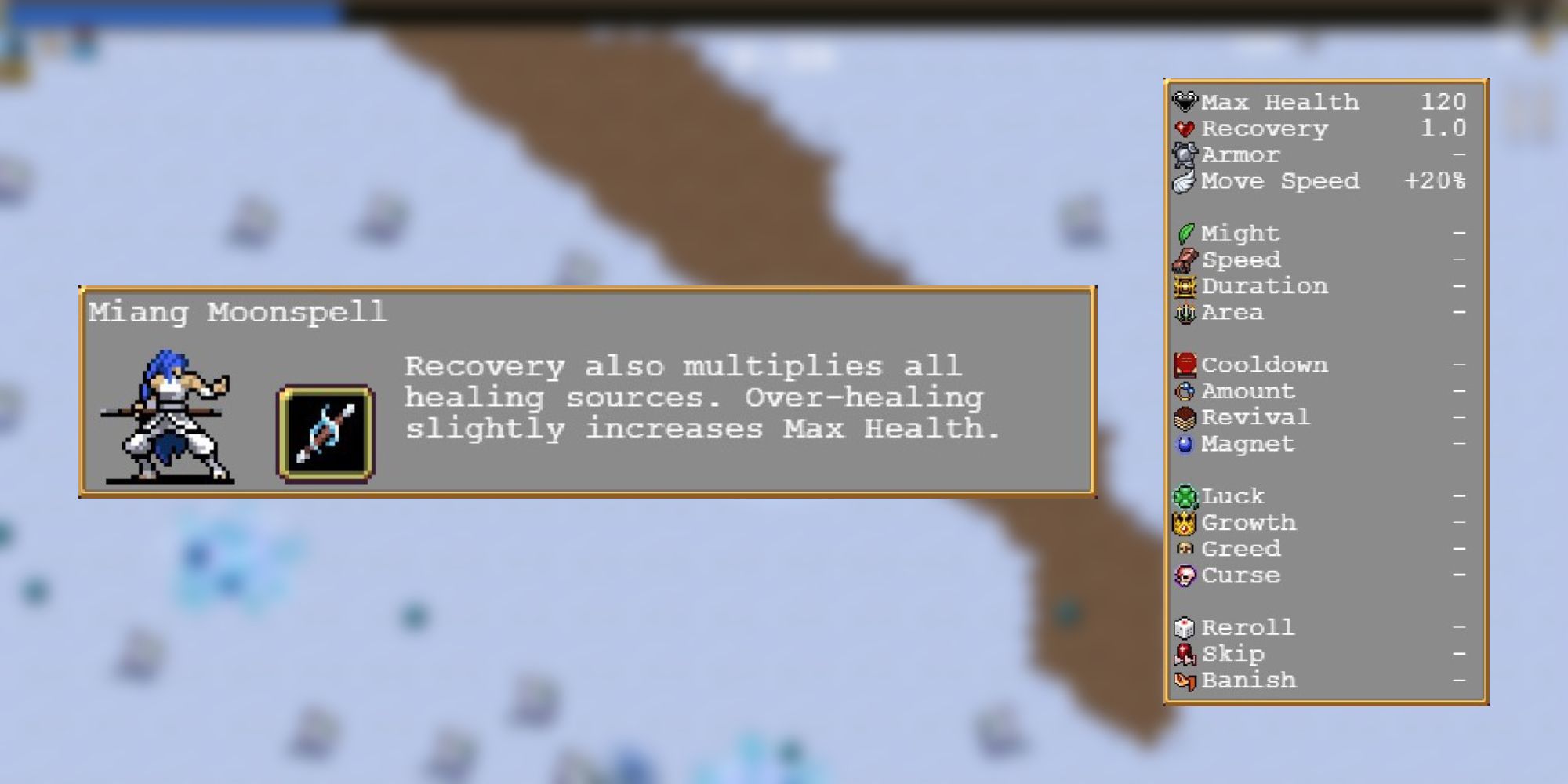 Miang Moonspell addresses the main issue with healing-focused builds in Vampire Survivors: the lack of reward for overhealing. Instead of wasting her heals, Miang slowly accumulates extra maximum health, letting her build up a massive health pool over the course of a long run.

Combined with healing weapons like the Soul Eater and Bloody Tear, as well as Arcanas like Sarabande of Healing, Miang become a heavy, damage-dealing tank, able to withstand the harshest enemy assaults and dish out punishment in return. 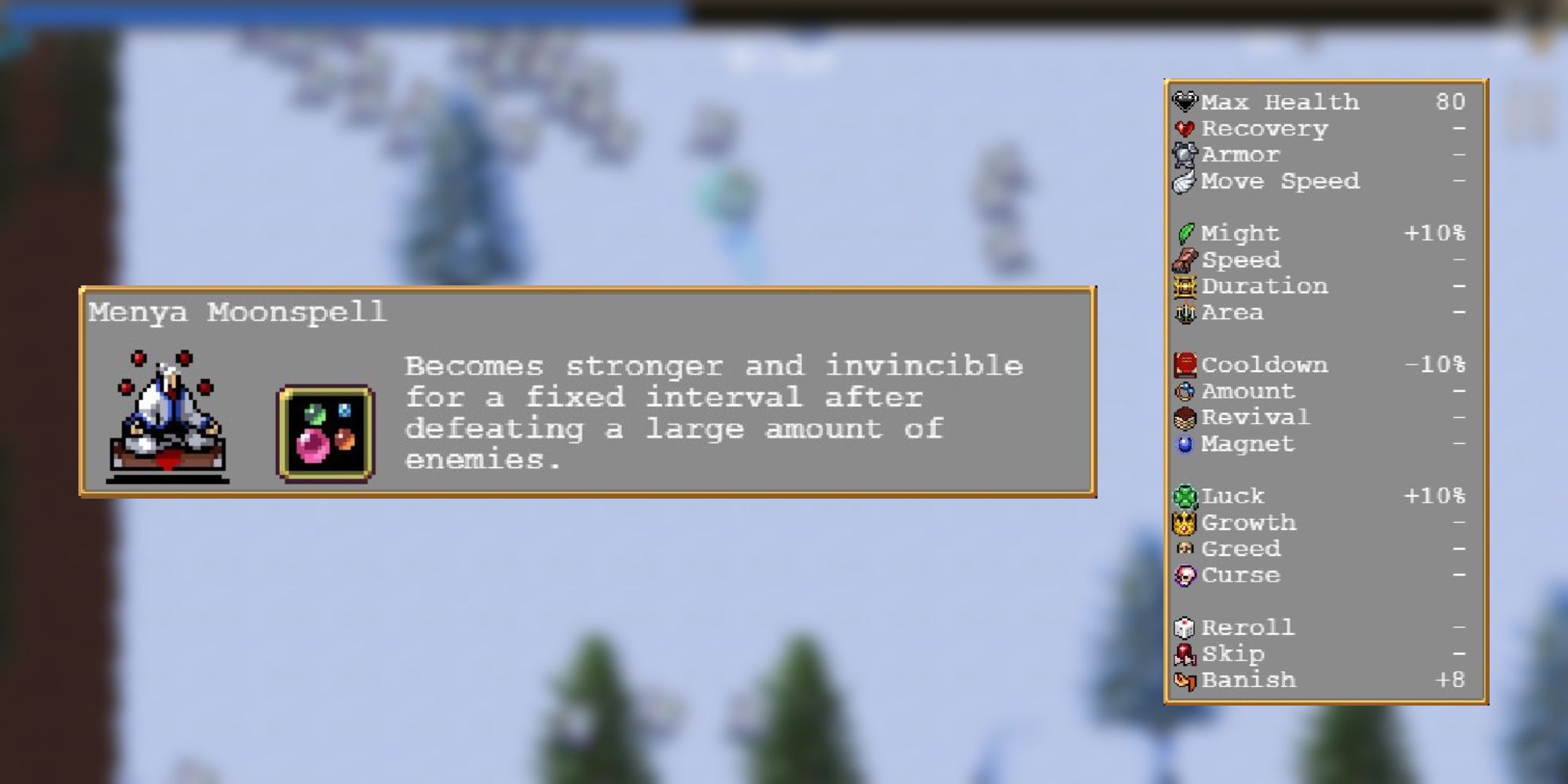 There’s an ebb and flow to playing with Menya Moonspell. One minute you’ll be struggling to survive thanks to her low starting speed and health, and the next you’ll be slaughtering waves of enemies with ease, once Menya has killed enough enemies to enter her ‘Megalo’ phase and become fast, strong, and temporarily invincible.

Her starting weapon, the Four Seasons, is probably the best new weapon introduced in Legacy of the Moonspell, and one of the best in the game overall, which helps to balance out her difficult early game. Once you can get things going and stay in her Megalo phase most of the time, Menya becomes nearly unstoppable. 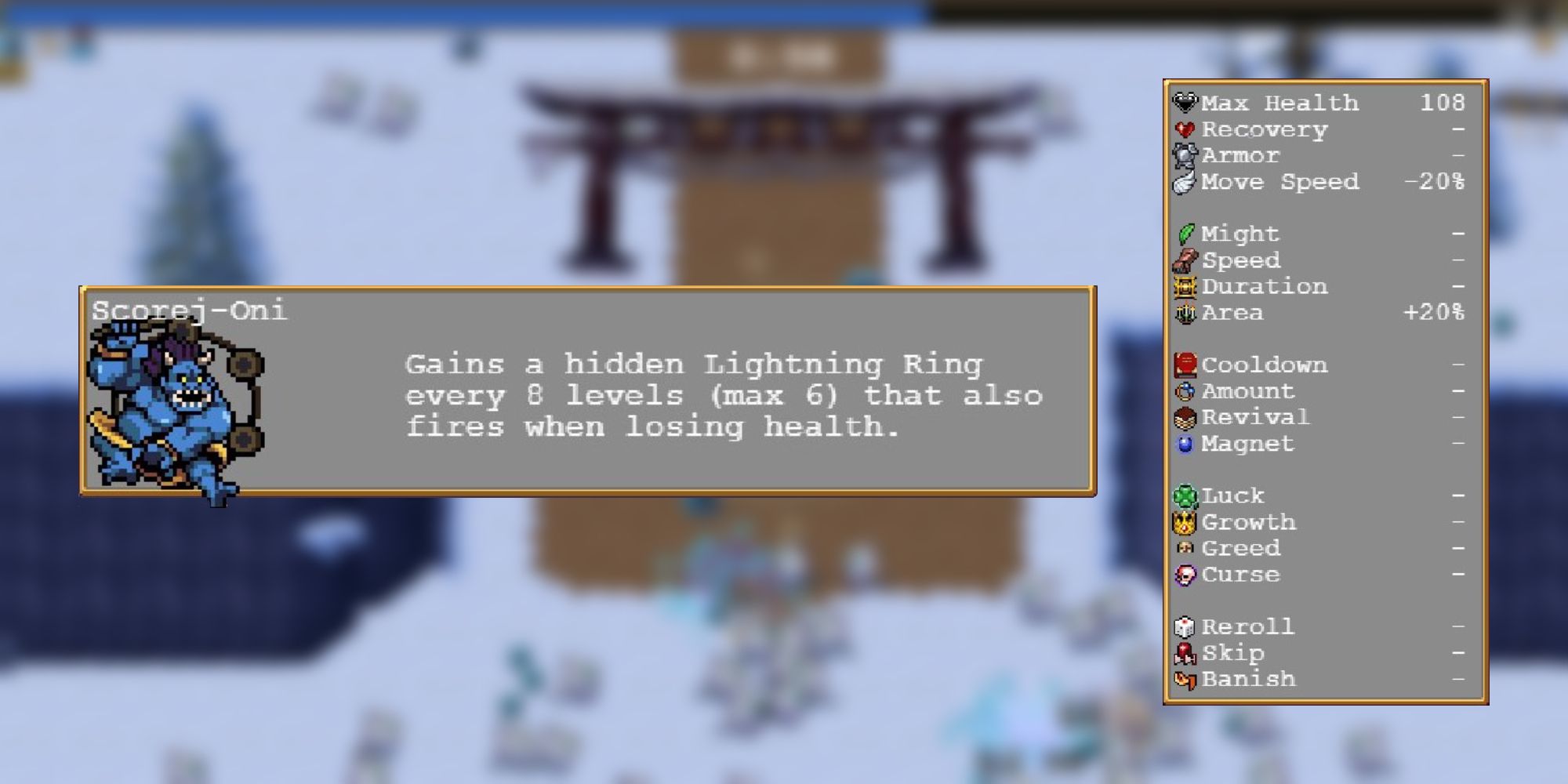 While not technically part of the Legacy of the Moonspell DLC, releasing just before it in the Tiny Bridge update, Scorej-Oni is definitely thematically linked to it; he even appears as an enemy on the Mt. Moonspell map. However you categorise him, Score-Oni is incredibly powerful, starting with a hidden Lightning Ring weapon, and gaining another every eight levels, up to a maximum of six.

This is a lot of free value at a base level, but it gets even better when you factor in his ability to retaliate with his Lightning Rings whenever he takes damage. You can stack this with other retaliatory items like the Night Sword, Victory Sword and Armour, then just charge into the enemy hordes and let the carnage commence. 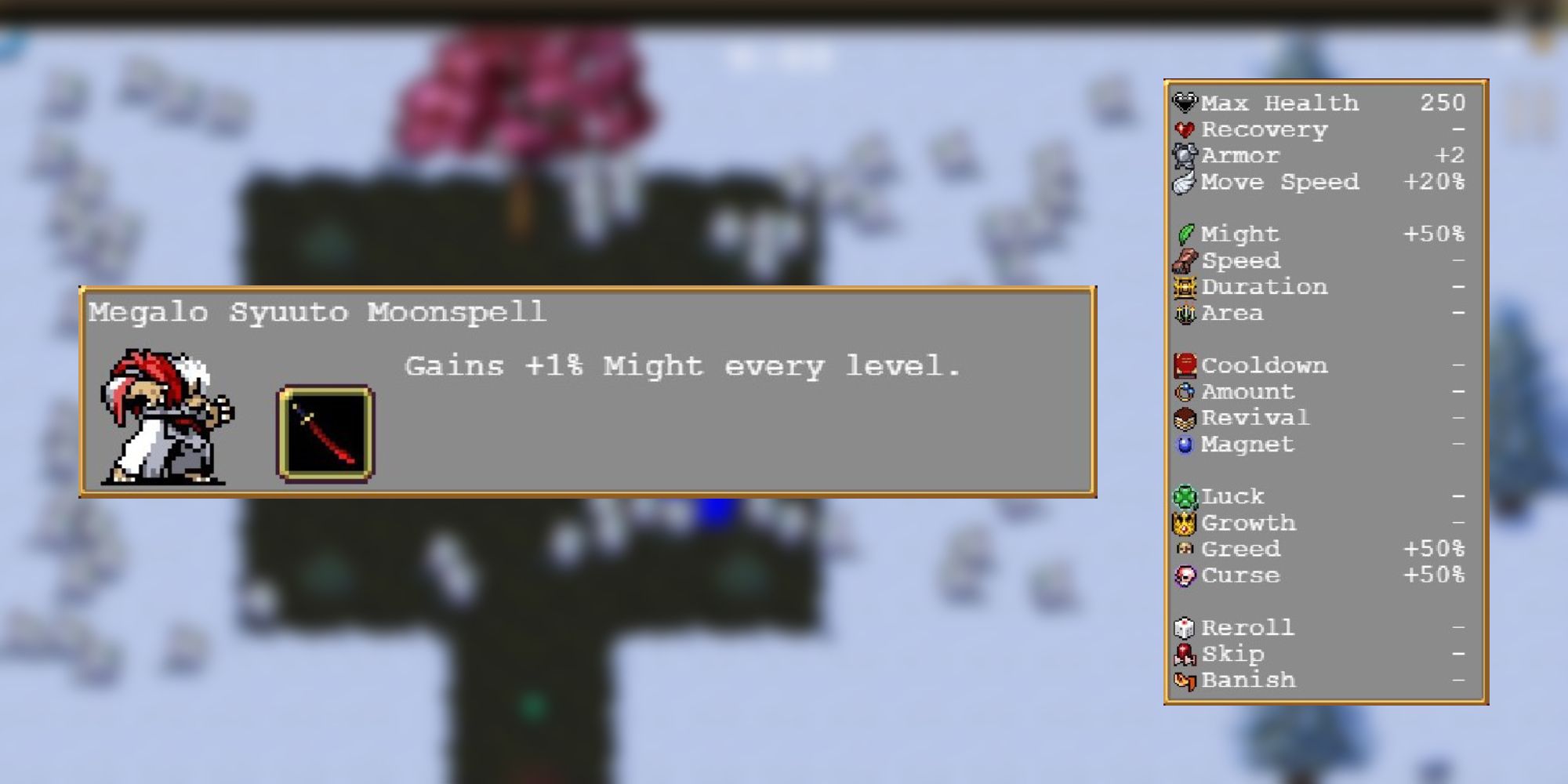 A tricky character to unlock, Megalo Syuuto Moonspell requires you to kill 100,000 enemies in a single run with the original Syuuto Moonspell. The effort this takes is well worth it, however, as it lets you skip the weak early game that Syuuto Moonspell normally has and get right to the good part: his evolved, more powerful form.

In addition to starting with much better stats, Megalo Syuuto also gains 1% extra Might every level, letting him scale up to meet the increasing difficulty of each stage, even when you factor in Curse. Fast, strong, and viable in the late game, Megalo Syuuto Moonspell is the ideal survivor. 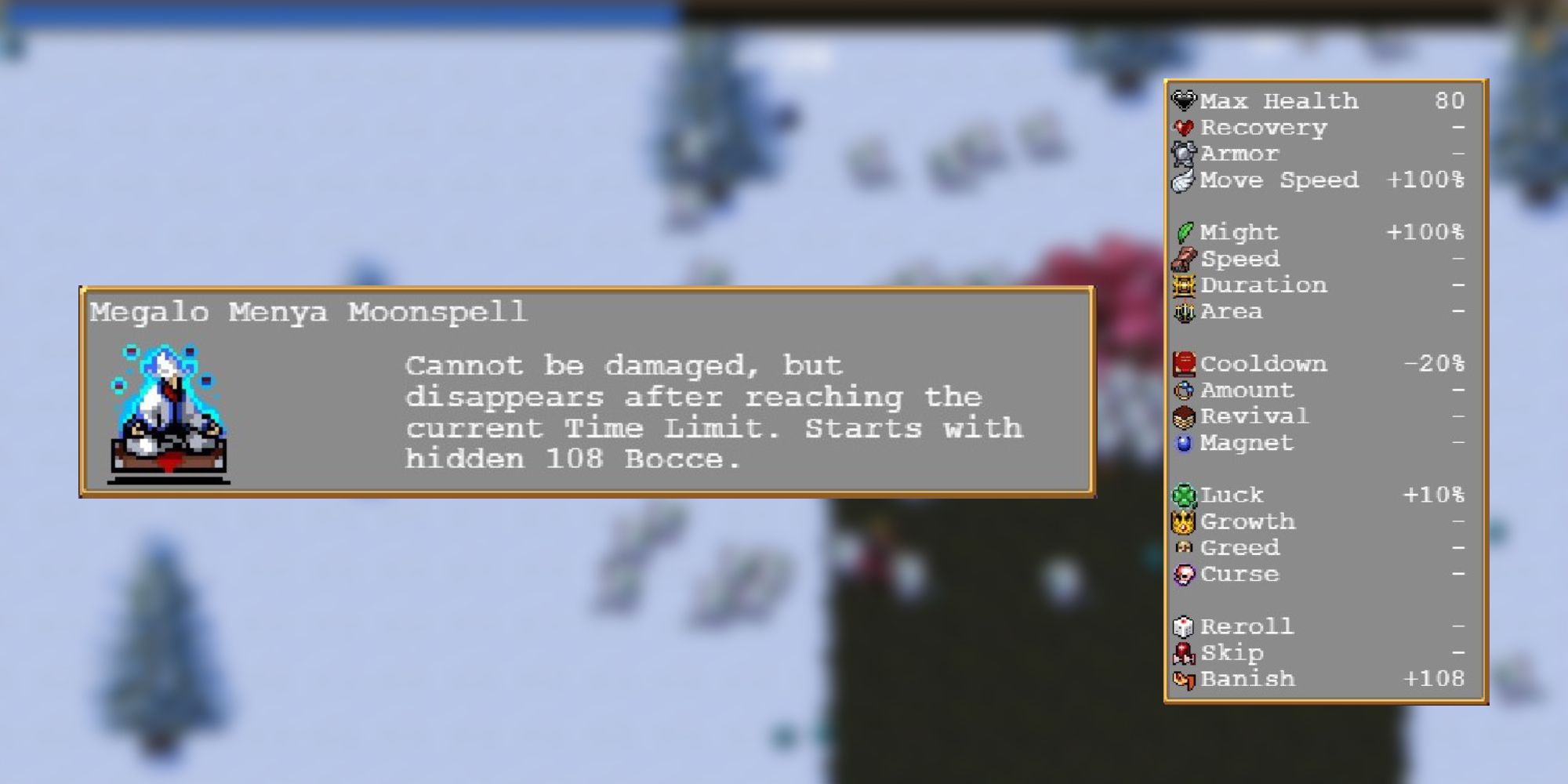 This trivialises every stage in the game, letting you unlock any secret characters you’ve missed with ease, and farm enough gold to buy any upgrades you need. Her one downside is that she disappears when time runs out, preventing you from taking on Red Death with her, but other than that Megalo Menya is an unparalleled survivor.