You are here:
Home / V Rising: How To Find And Defeat The Duke Of Balaton

V Rising: How To Find And Defeat The Duke Of Balaton

Upon reaching the final difficulty tier in V Rising, you will be forced to travel to the most dangerous locations the map has to offer. One of these is the Cursed Forest, a festering mire of diseased undergrowth and vicious wildlife. The Duke Of Balaton resides over the kingdom of the toads, and little remains of his former life as a human, save his boundless greed. A giant toad, he utilises waves of poisonous attacks and a loyal army of froggy followers to bring you down.

This guide will teach you where to find The Duke of Balaton, how to beat him in combat, and what rewards you will acquire from doing so.

The Duke Of Balaton's Location 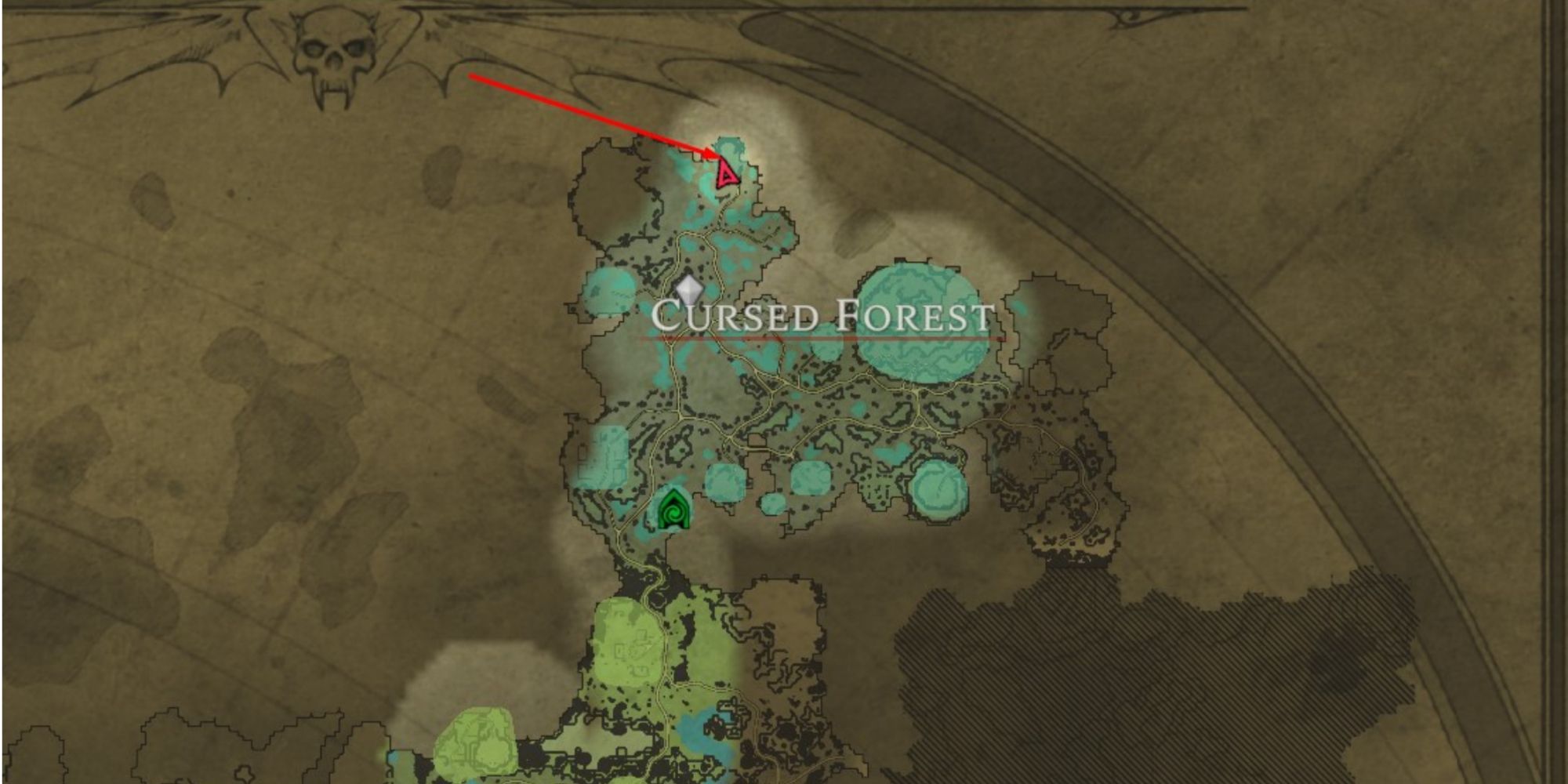 The Duke Of Balaton is located with the Swamp of Greed, which lies at the extreme Northern point of the Cursed Forest. An extremely dangerous area, the Forest is home to a large variety of enemies, and safely reaching the Den of Greed can be a challenge in itself. The Cursed Forest Waygate is not particularly close, so you will have quite a journey on your hands.

The road will be teeming with enemies, including Witches and Night Lurkers. Take your time with progressing, and if playing on a PvP server, try to keep your health relatively high, as the Cursed Forest can be a ganking hotspot. You may want to try and sneak through in Rat Form, to avoid any unnecessary skirmishes.

Once you reach the Den of Greed, there are no small enemies inside, and the Duke can be engaged immediately. Try to wait for nighttime, as the area is quite open and there will be little cover from the sun.

Due to him always being found in the same spot, using your Blood Altar is not required. 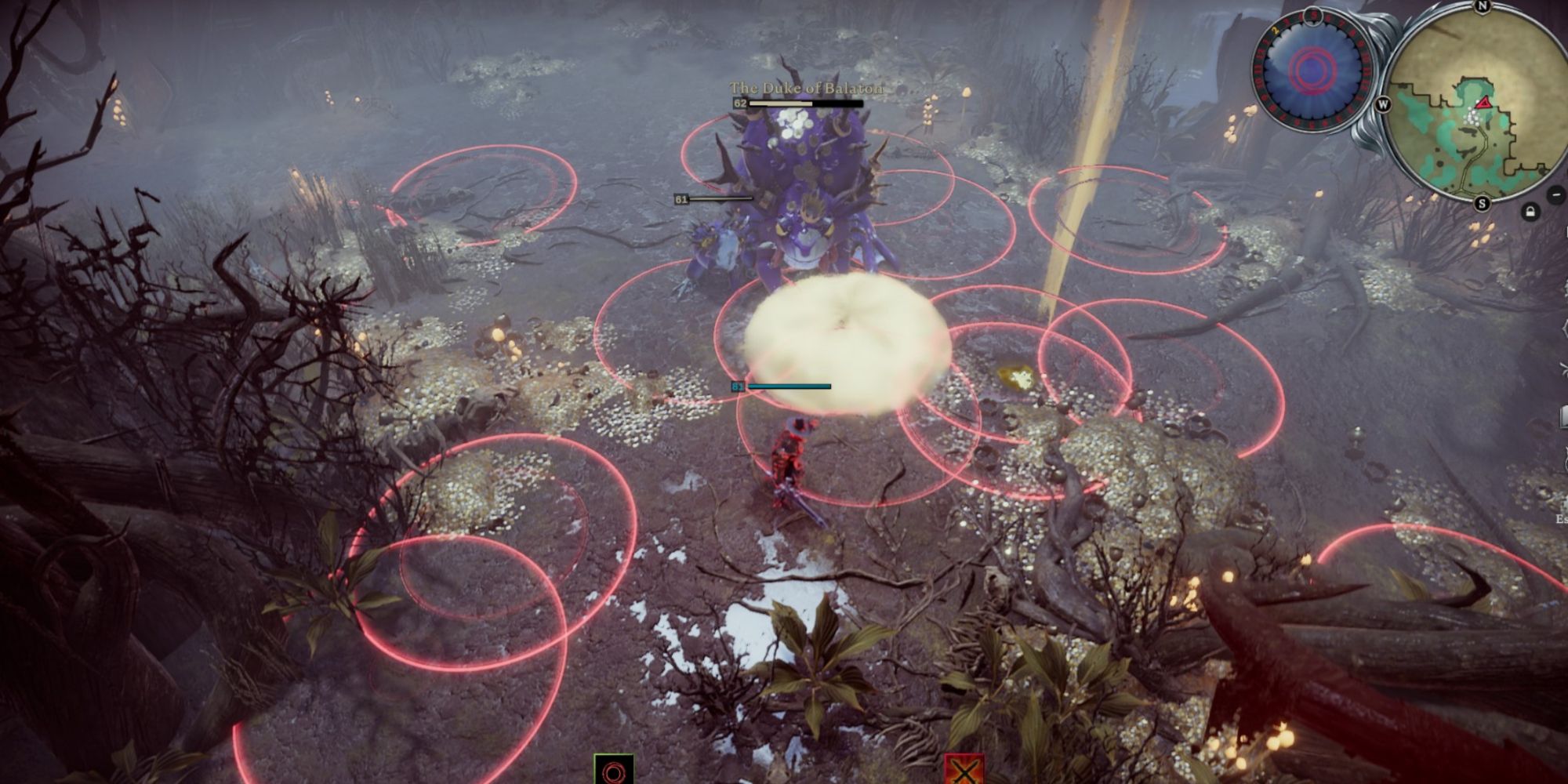 While not generally considered to be one of the harder end-tier bosses in V Rising, The Duke Of Balaton can still pack a punch. A combat level 62 enemy, he will focus on coating the ground in AoE explosions and summoning various toad minions to destroy you.

His first ability is a frontal tongue lunge, which will deal damage and pull you towards him. This comes out quite quickly, so try to keep strafing, as being dragged into his range can lead to you being combo by subsequent abilities. The tongue's damage is low, but the Duke will utilise it fairly frequently throughout the fight. His basic attack is a double frontal tongue swipe that will knock you back by a small amount.

The Duke will also create a large number of poison pools on the ground, which after a small delay, will rain down projectiles in an AoE. They are quite numerous, and due to the random patterns it can be hard to dodge all of them in one go. Try to retain your Travel Ability for this spell, as you should try to avoid taking as much avoidable damage as possible in this fight. There are frequent situations where you may take some chip damage, so retaining your health is very important.

The Duke will frequently summon Cursed Spitter Toads to aid him in battle. They have medium health and will spit poison towards you. Killing these off is your top priority, as you want to try and keep the fight manageable, and avoid being overrun. Because of this, there are a wide variety of spell options at your disposal, as either single target or AoE spells can be effective.

The Duke will occasionally perform a leap attack, which will result in you being swallowed whole. He will then spit you back out and cause splash damage in an area around your landing site. The attack will stun you for a couple of seconds, and can lead to you being attacked by his toads, so remain on the lookout. The Duke's movement is very slow, so you should be able to stay at range and avoid the majority of his physical moves.

At roughly half health, The Duke will leap into the air and become untargetable. He will then summon three Cursed Spitter Toads at once, whilst bombarding you with poison. Save your Ultimate for this, and you should be able to nuke down all three toads before The Duke reenters the fray.

Whilst you have obtained a variety of options by this stage of the game, the recommended spell choices are quite specific. Ward of the Damned and Chaos Volley are your basic spells and Volatile Arachnid is your preferred Ultimate. The Arachnid will let you destroy the intermission adds, and Chaos Volley will provide the single target damage needed to kill the boss. The key with Ward of the Damned is to allow yourself to be hit by the basic tongue swipe, which will spawn two friendly Skeletons in front of you. These will then be able to soak The Duke's tongue pull ability, and give yourself some free time to damage him.

For gear, try using a Dark Silver Reaper, which will give you a great ranged damage option with Howling Reaper. Dawnthorn Regalia armour is your best choice, and try acquiring some Scholar Blood from the Dunley Monastery beforehand.

The Duke Of Balaton's Rewards 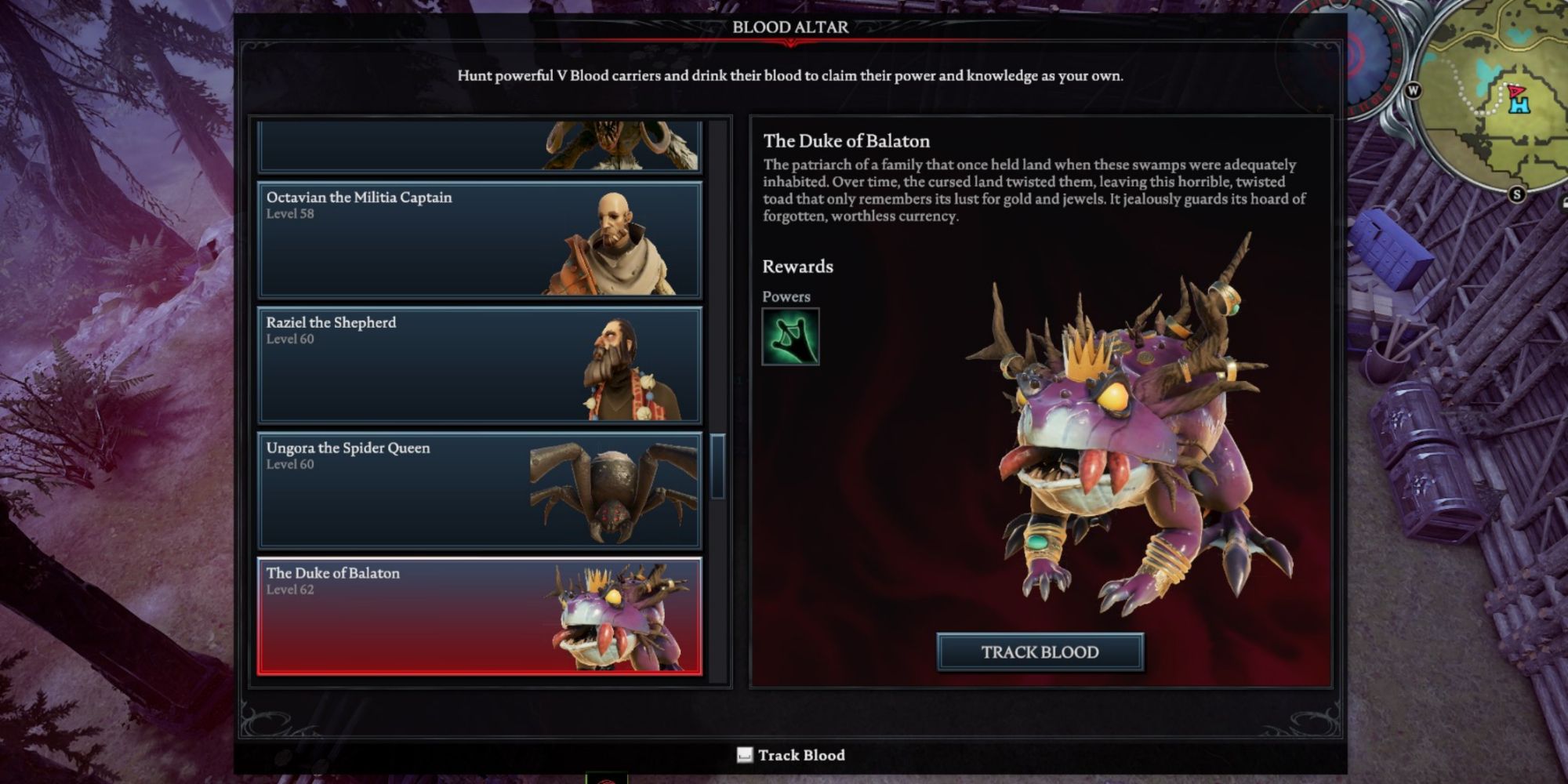 The Duke Of Balaton only has one reward to grant you: Toad Form. A Vampire Power that transforms you into a giant toad, it will allow you to jump extremely high into the air — but is broken upon taking any damage.

This form is primarily useful for navigating areas with cliffs, or for use to raid enemy bases on PvP servers. The jump is high enough to scale walls, so you can leap right into an enemy castle and bypass their defenses. Its use is limited for PvE, but it can still save you travel time should you need to scale some vertical terrain.

Due to the relatively low power of this ability, The Duke Of Balaton is not considered a mandatory boss, and can certainly be skipped in favour of more lucrative rewards.