You are here:
Home / V Rising: How To Find And Defeat Azariel The Sunbringer

V Rising: How To Find And Defeat Azariel The Sunbringer

The Silverlight Hills in V Rising is controlled by the Church of Luminance, a holy order that wields the power of the light to vanquish the evil within Vardoran. Azariel The Sunbringer is one of the most prominent members of this organisation, and possesses even stronger magical mastery than previous foes such as Raziel The Shepherd.

He is a tough late game challenge, and you should have collected some powerful gear before seeking him out. 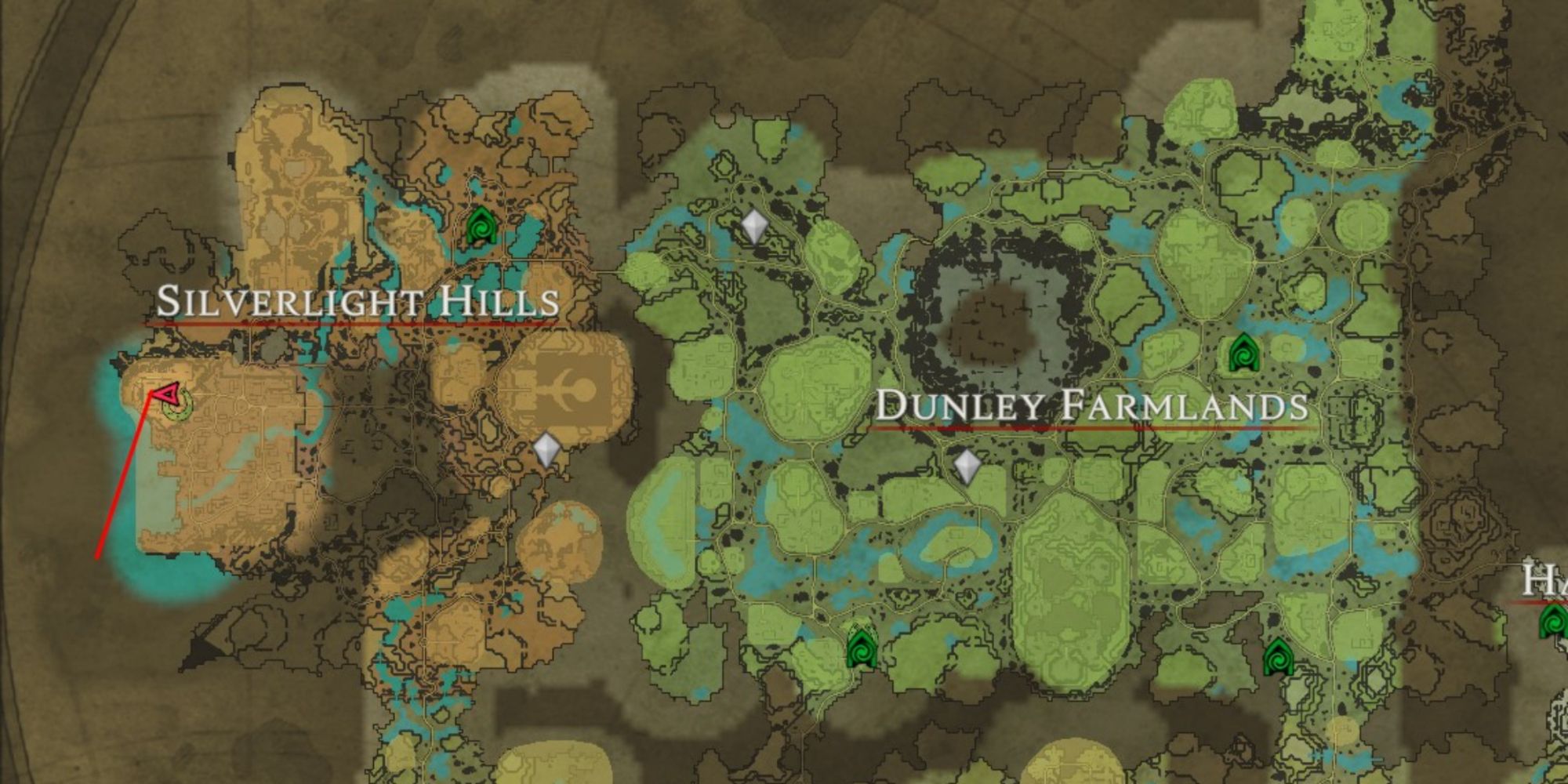 Azariel The Sunbringer in located within the Brighthaven Cathedral, in the Western section of the Silverlight Hills. The Cathedral lies at the back of the large town of Brighthaven, a well guarded settlement with many packs of enemies.

Due to the high number of hostile guards, it is not recommended to fight your way through the town. Instead, try utilising the Human Form Vampire Power to safely sneak past the church's forces. This will cause human enemies to ignore you, and grant you safe passage amongst their settlements. However, this will only work for the regular guardsmen, and special enemies will be able to see through your disguise.

Paladins and Priestesses are blessed by the light, and will still be hostile to you as a Human. Either try and sneak past them using Rat Form, or engage them in combat. The Paladins in particular are extremely tanky and can be a handful even if you are well geared, so try your best to avoid engaging them. With how they patrol, you will have the opportunity to sneak into the Cathedral undetected, if you remain patient.

Once inside you will notice that you begin to take Heavy Holy Radiation damage. To counter this, you will have to have brought a Holy Resistance Flask, which can be crafted after killing Willfred The Werewolf Chief. Crafted at your Alchemy Table, this will nullify the Holy Damage and allow you to contest Azariel on a level playing field.

Due to Azariel always being found in the Cathedral, using your Blood Altar to track him down is not mandatory. 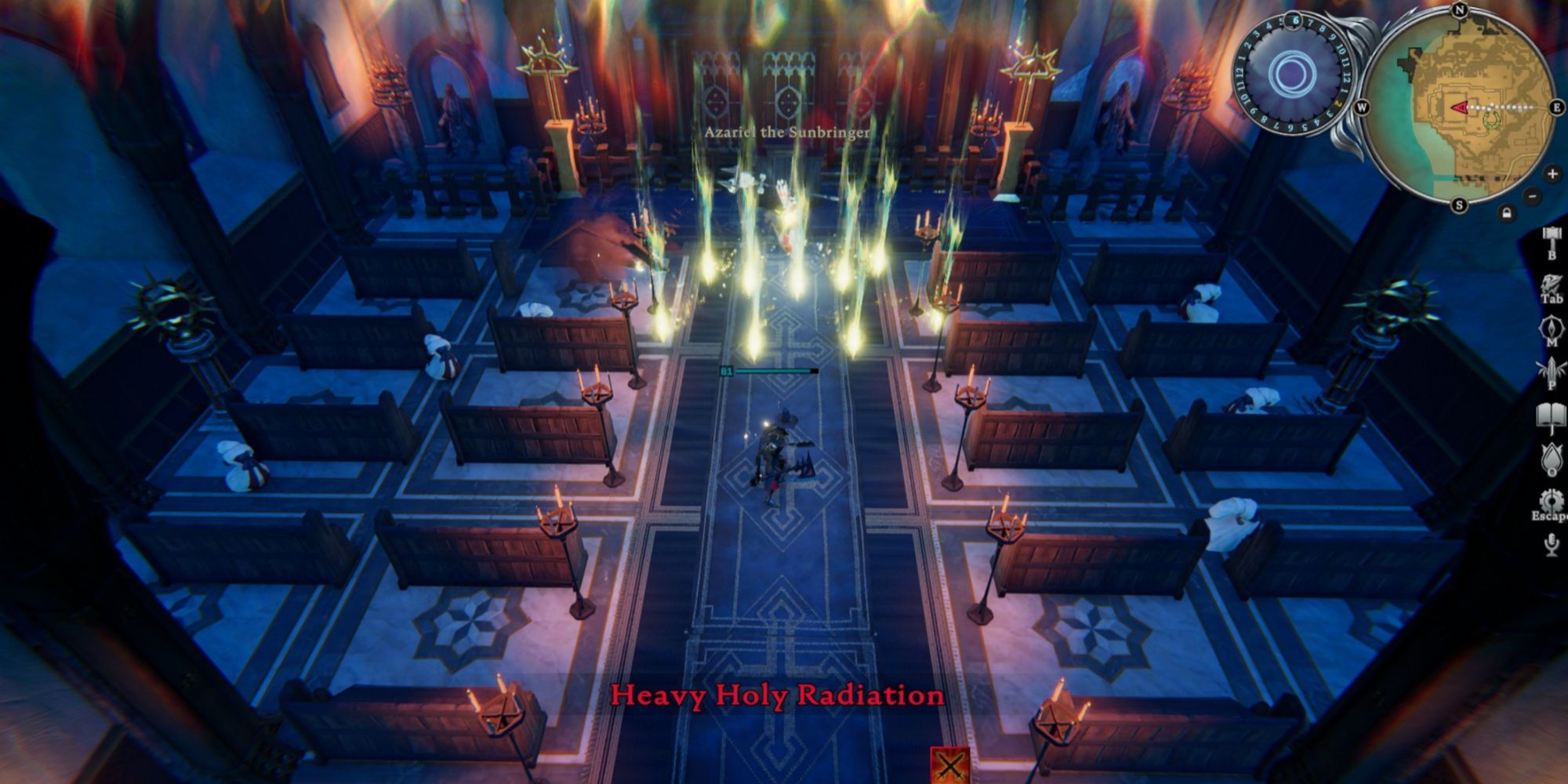 While powerful, Azariel The Sunbringer is actually a very simple fight. He only has a few abilities and with a proper strategy you can make short work of the Church leader.

His primary offensive spell is to summon waves of Holy Beams, that travel forwards in an expanding cone. They move quickly, and if you are positioned in front of the boss you may be hit by multiple. They do not deal much damage individually, but there will be so many spawned throughout the fight that you are liable to be hit by some.

The best way to deal with them is to stay at range, where you will have more room to weave in between each projectile. Destroying some pews found in the Cathedral will give you some more room for this.

Upon reaching half health, Azariel will begin to resummon the Holy Beams, causing them to travel back into him after reaching their maximum travel distance. This will force you to dodge in both directions, and moving to the side is the best way to deal with this phase.

His next ability is to summon Holy Totems, that will cause him to be completely Immune whilst active. These are your number one priority, and should be nuked down as quickly as possible. They have a decent bit of health, so it will take more than one spell, but Azariel will only summon them infrequently, so they should not be too bothersome.

After dropping to around 30 percent health, the bosses last ability will become active. Holy Spears will rain down from above, causing large damage to you. All this really does is further complicate your beam dodging, so try to nuke the boss relatively quickly, as you want to finish the fight before being clipped by too many projectiles.

For gear, try running the combo of Shadowbolt and Chaos Volley, for maximum single target damage. This will let you destroy the Holy Totems, and give you a quick fight time, provided you have good accuracy. A Dark Silver Reaper gives you a good ranged attack, and some Scholar Blood will enhance your spells. The Chaos Barrage Ultimate is great here, as it allows you to keep on the move, and some Dawnthorn and Bloodmoon armour will be your defensive choice, depending on what you have been able to successfully research at your Athenaeum. 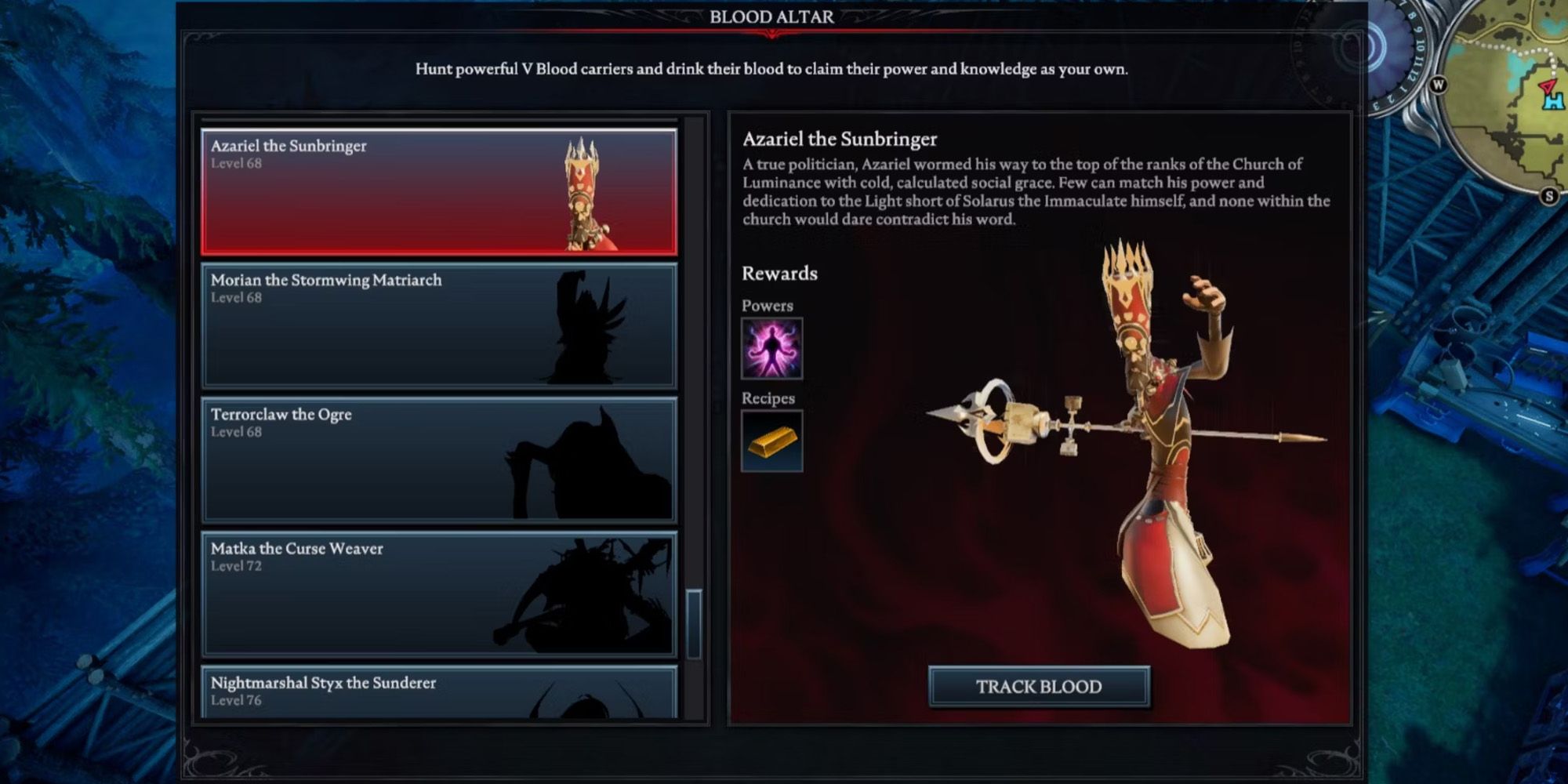 Azariel The Sunbringer gives two rewards upon draining his V Blood, and neither are really mandatory. The first is the Power Surge Vampire Power, a powerful single target buff spell, that shields your friendly target for a large amount, cleanses all current debuffs, and provides a small movement and attack speed increase.

This is a fantastic spell, and is a must-use for more supportive vampires. The buffs last for as long as the shield remains active, so with proper gameplay it can be a substantial power increase. While strong, it can be difficult to fully utilise as a solo player, as you may lack damage in some fights due to not choosing a more offensive spell, but Power Surge will still remain a premier defensive choice.

The second reward you will receive is the Gold Ingot recipe. Primarily used for creating high-end decorative structures for your Castle, Gold Ingots can be smelted using a combination of Gold Jewelry and Sulphur. The Jewelry can be tricky to acquire, as it will primarily come from late game mobs such as Paladins. This can make it hard to farm, but the good news is that Gold Ingots are not really required for any power increases, and can be skipped if your goal is simply to defeat every boss in the game.