Deckbuilding video games have become an increasingly visible genre in the market. For instance, recent titles such as Inscryption and Signs Of The Sojourner have created their unique spin on the gameplay model. Furthermore, triple-A titles, such as Yu-Gi-Oh: Master Duel, continue the tradition of trading card gaming in the virtual arena.

Urban Cards is another game of this ilk, but with a significant twist. This game combines PvP card fighting and roguelike campaigning with a capitalist spin reminiscent of the board game Monopoly. And like Monopoly, the single-player campaign starts breezy but develops into a frustrating affair that will have you hooked for hours seeking to get your business to the top. Here are some tips to give yourself a competitive edge.

Pay Attention To You And Your Opponent's Finances 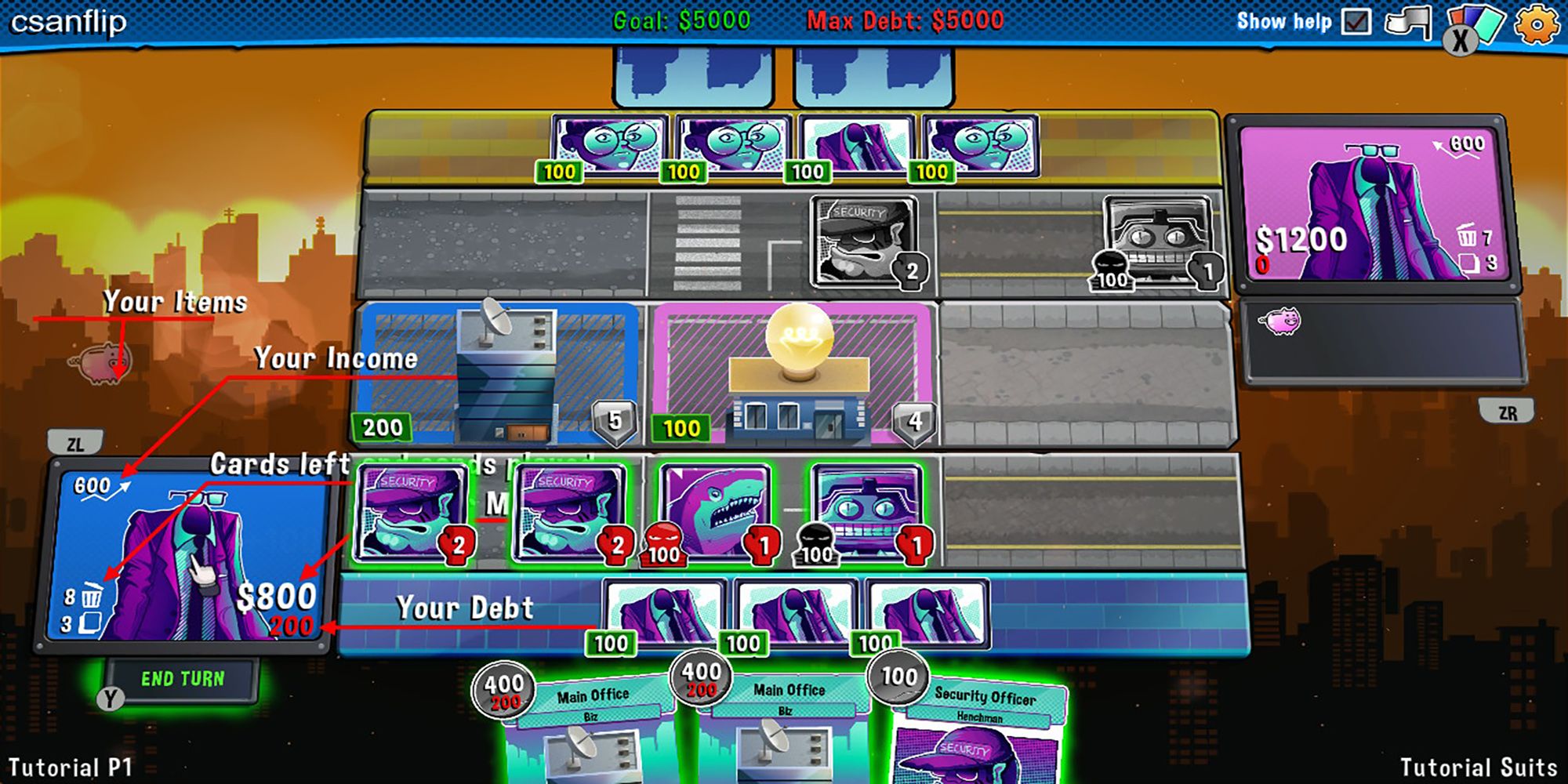 The object of Urban Cards is simple. The goal of each player is to either A) reach a target amount of money in their bank or B) push their opponent past an assigned debt limit. Unfortunately, as straightforward as these goals sound, they become more challenging to track in practice. After all, like most financial affairs, you and your opponent's debt and income will increase and decrease throughout the game. Therefore, tracking these ups and downs is vital.

So, what can you do to prevent your foe from winning and buy enough time to reach your turn and capture the game? Here's one example. Suppose you have a thief on your street. In that case, you could have them steal from your foe, thus taking them out of range to reach their goal in the next turn. A move like this could secure your victory.

Of course, this situation is hypothetical, but you'll see similar scenarios come up a lot. However, if you're not anticipating how much money your opponent will make in their next turn, you'll miss these moments completely. In a way, this line of thinking is similar to the kind you would employ in a game of Monopoly.

More Biz Cards In Play Increase Your Chance Of Victory 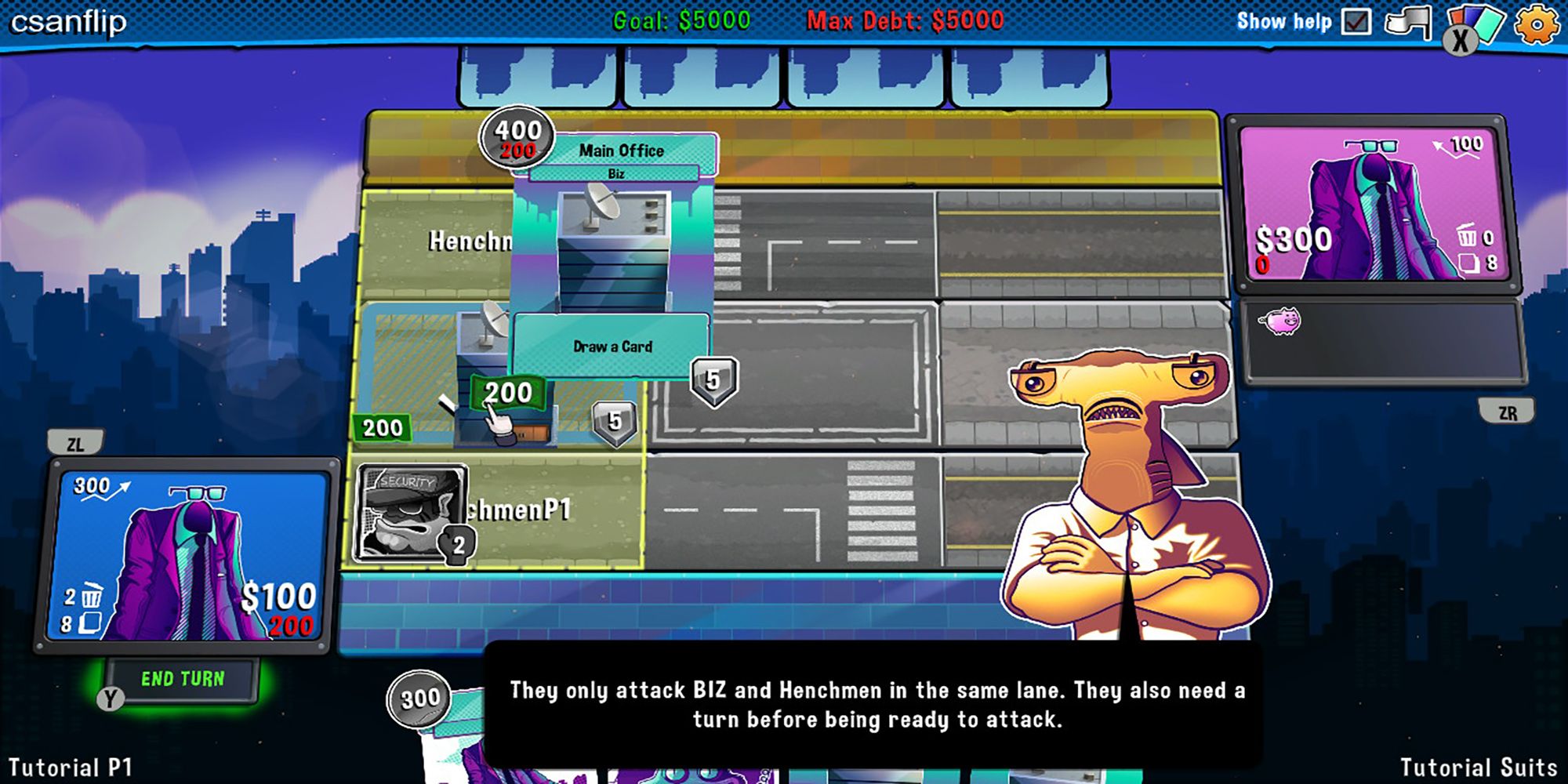 Urban Cards also compares to Monopoly because control of the board is a significant priority of the game. There are only three slots available for Biz cards (your businesses). Since biz cards generate a lot of income, and many worker cards get boosted from biz cards, filling in most biz card slots is essential.

However, unlike Monopoly, you won't lose your business properties from mortgages and auctions. On the contrary, businesses take damage from opponents' henchmen. Therefore, if you don't protect your business from henchmen, you'll lose it. In other words, you need to employ henchmen to take down opponent henchmen before they can strike.

Henchmen work similarly to attack cards in other deckbuilding games. For example, each card exchange blows according to their respective attack points when a henchman attacks another henchman. Or, you can attack business cards with your henchmen, therefore decreasing that business's defense points with no adverse effect on your henchman.

However, each henchman you have in play can only get used once per turn. Furthermore, henchmen cards are taken out of play once their AP reaches zero.

Biz cards incur debt when put in play. Therefore, keeping your debt in control between card battles will decrease the risk of playing biz cards. Still, it would help if you consistently tracked how much debt your biz card will incur before playing it.

You Can Upgrade Biz Cards With Identical Biz Cards 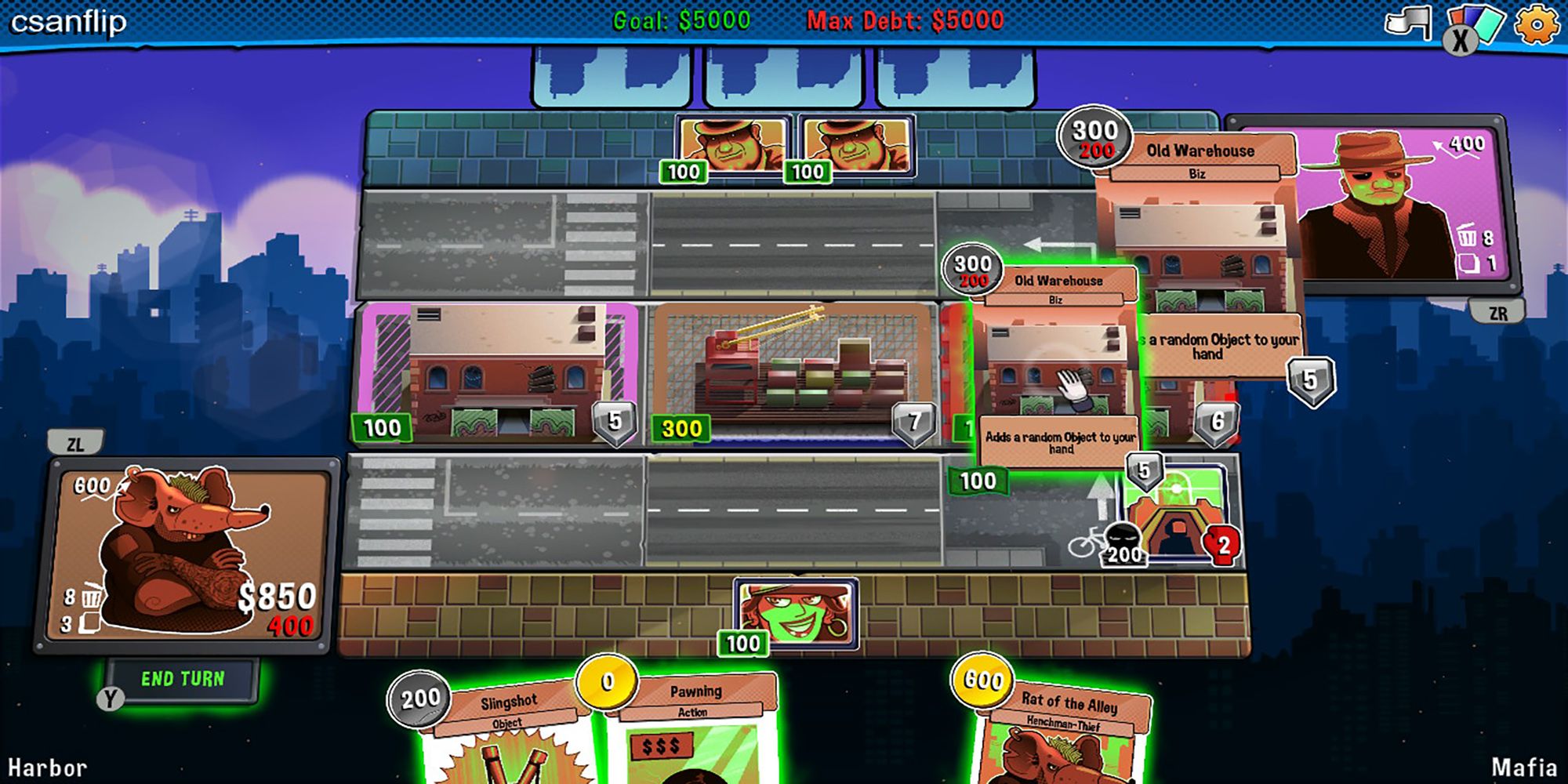 Urban Cards's tutorial makes a lot of assumptions about how versed their players are when it comes to deckbuilding games. In addition, the tutorial's shallow nature means that certain gameplay elements will get lost to you if you don't think of trying them out yourself. For instance, did you know you can improve your biz cards with biz cards of the same type?

That's right, biz upgrade cards are not your only option to buff biz cards. If you have the same biz card in hand as one in play, you can place it on the in-play card. In addition, the stats from the new biz card, such as income and defense points, will get added to the in-play card.

We encourage you to pay attention to the biz cards in your hand, even if all the biz cards occupy all available board spaces. Doing so will help you catch opportunities for potential upgrades to bolster your businesses from enemy attacks and boost your income each turn.

Watch Out For Thief Cards 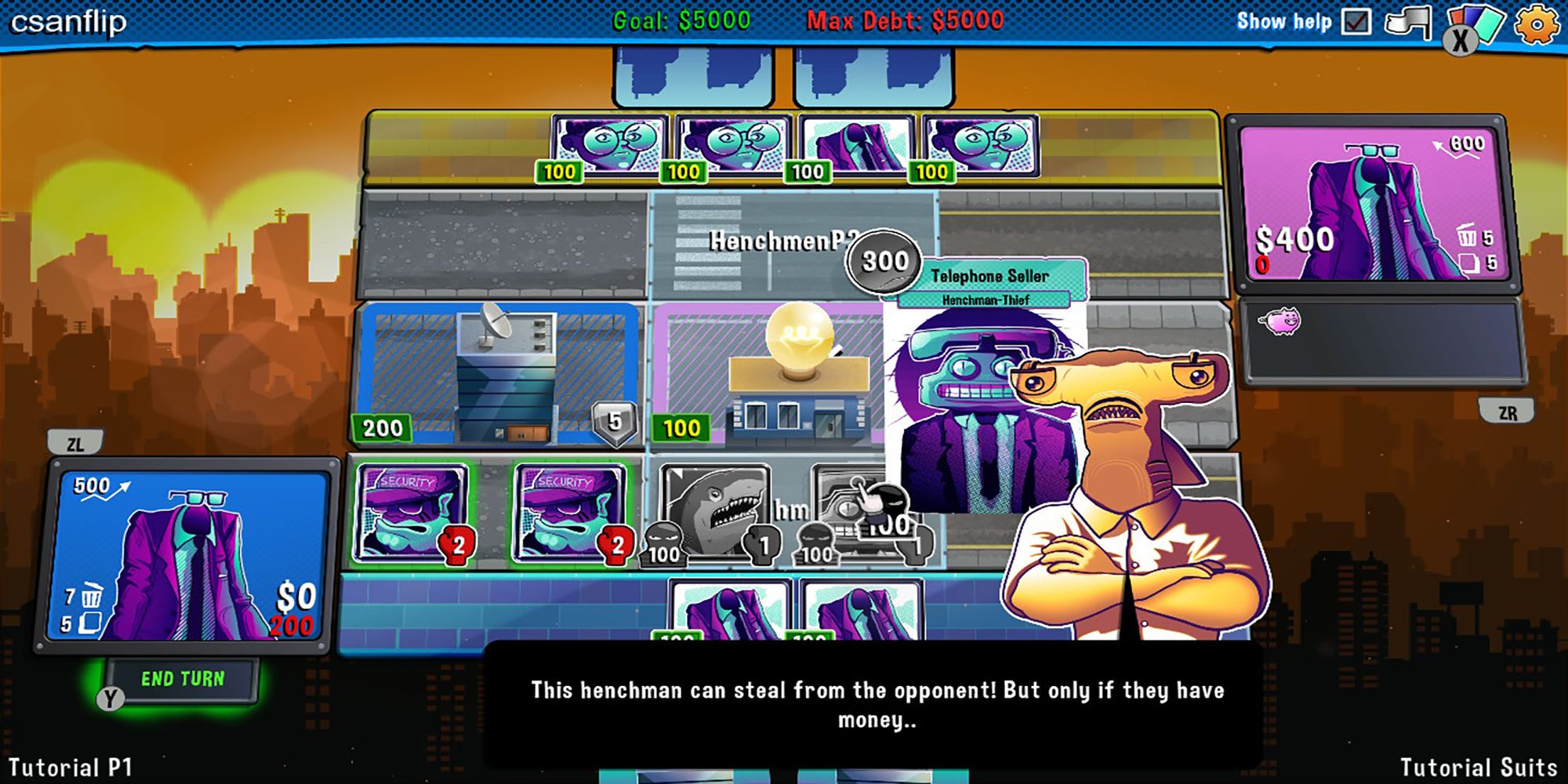 Remember how we mentioned thief cards earlier? They are more of a gamechanger than you may think. After all, even if a thief card's stealing potential is small, it adds up. And every thief card added to the board increase that stealing potential. Add boosts to these cards, and they become even more devastating.

For example, suppose your income per turn is $1,000, but your opponent's income is only $500 per turn. That's a clear advantage, right? Not necessarily. Imagine your opponent has two thieves in play, each capable of stealing $250 per turn. If your opponent plays both thieves, their net gain for the round will be $1,000, while yours will be $500. In short, your opponent's thieves gave them the advantage all along.

The damage that thief cards can unleash establish them as essential targets for your henchman once they hit the board. This sentiment is especially true when there is more than one.

While Urban Cards favors offensive play, an abundance of enemy thieves is one of the few moments that would dictate defensive play from your henchmen. After addressing the thieves, you can always employ more henchmen to take down your opponent's business.

Take Every Available Opportunity To Visit The Shop 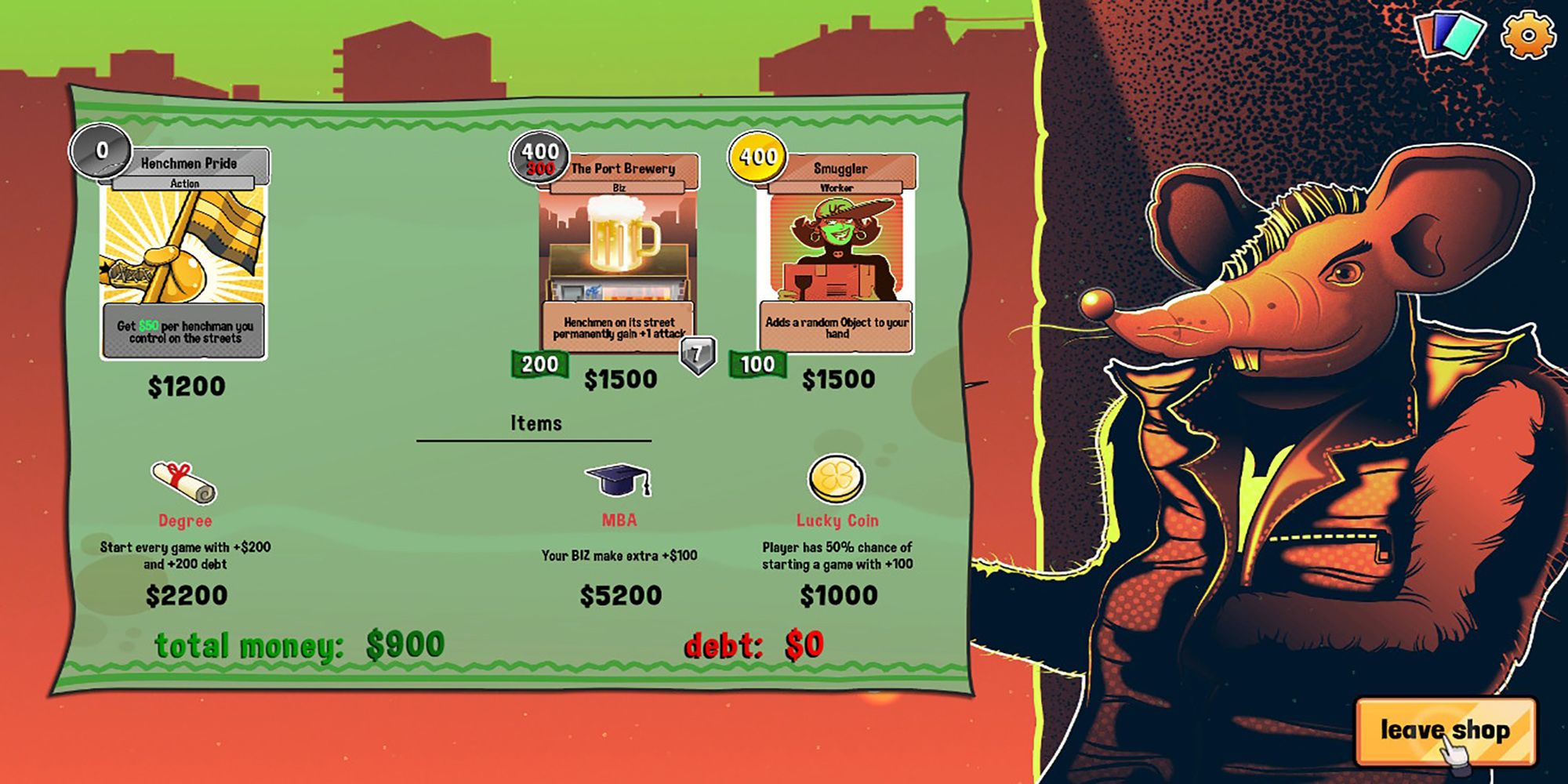 In a single-player campaign, every stage offers you two out of three matches/events to play. Taking on more battles will earn you more money. However, if you already have a lot of money in your account, you should take advantage of shop events.

The shop offers plenty of goodies that will give you an edge in battle. For instance, you can add more cards to your deck through the shop. Or, you can buy status buffs that will carry over from battle to battle. Buying items from the shop does not take away from your total score. Therefore, it makes sense to use your winnings to better your game. 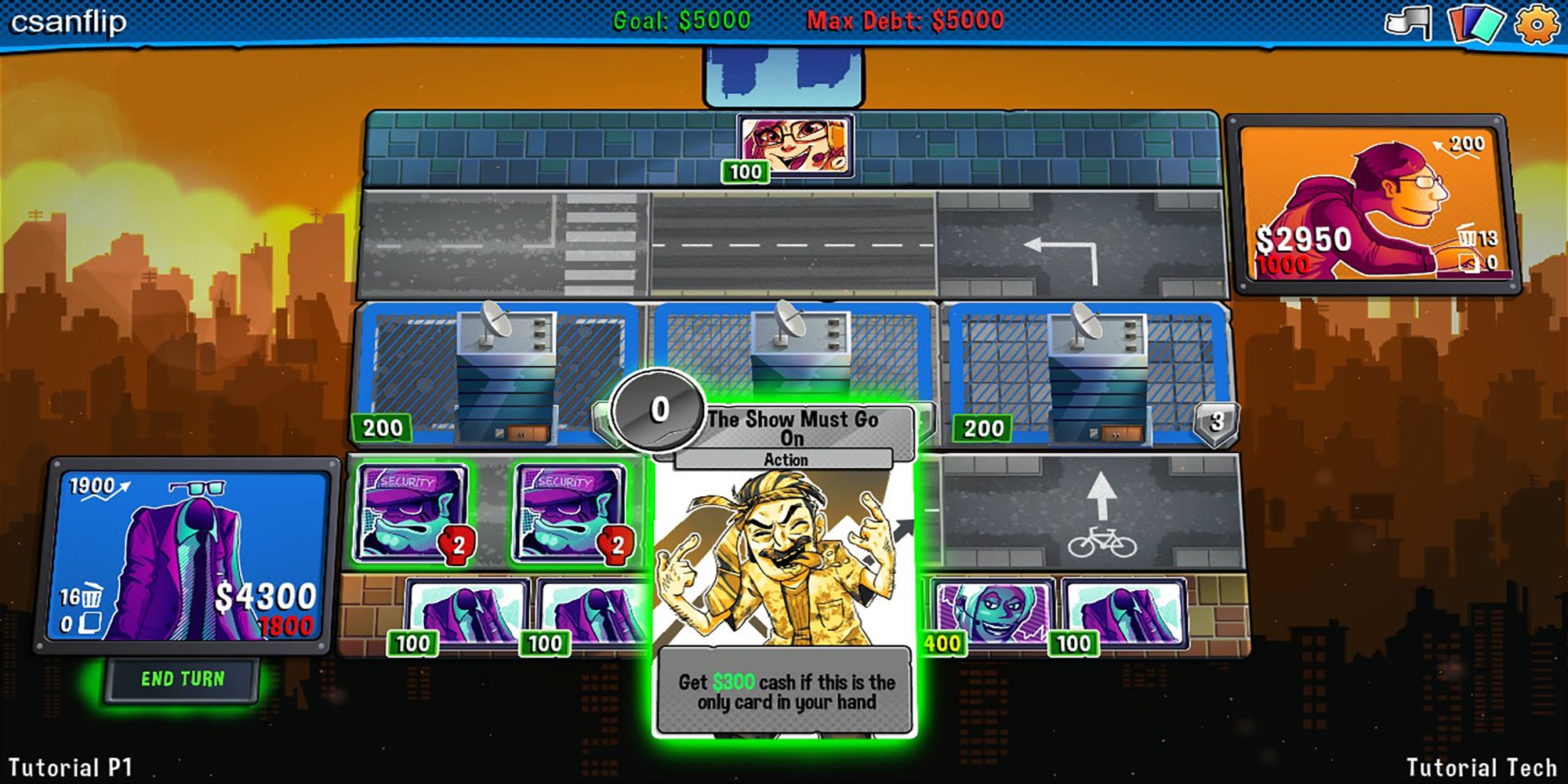 Urban Cards encourages players to make use of their assets. While depleting your hand can leave you scarce in resources later in the game, it will also make you eligible for bonus cards. You'll receive bonus cards every turn you play with an empty deck.

Unlike the cards in your deck, bonus cards sport a grey color and offer various positive effects. Some examples include Last Coin In Your Pocket, which rewards $100 and draws a card from your discard pile, or The Show Must Go On, which rewards $300 when it's the only card in your hand.

Furthermore, the game will gift you a bonus card to use in your rematch when you lose a battle. So, if you fail to defeat a demanding boss, don't lose hope. Your bonus card may help turn the tables in a rematch.